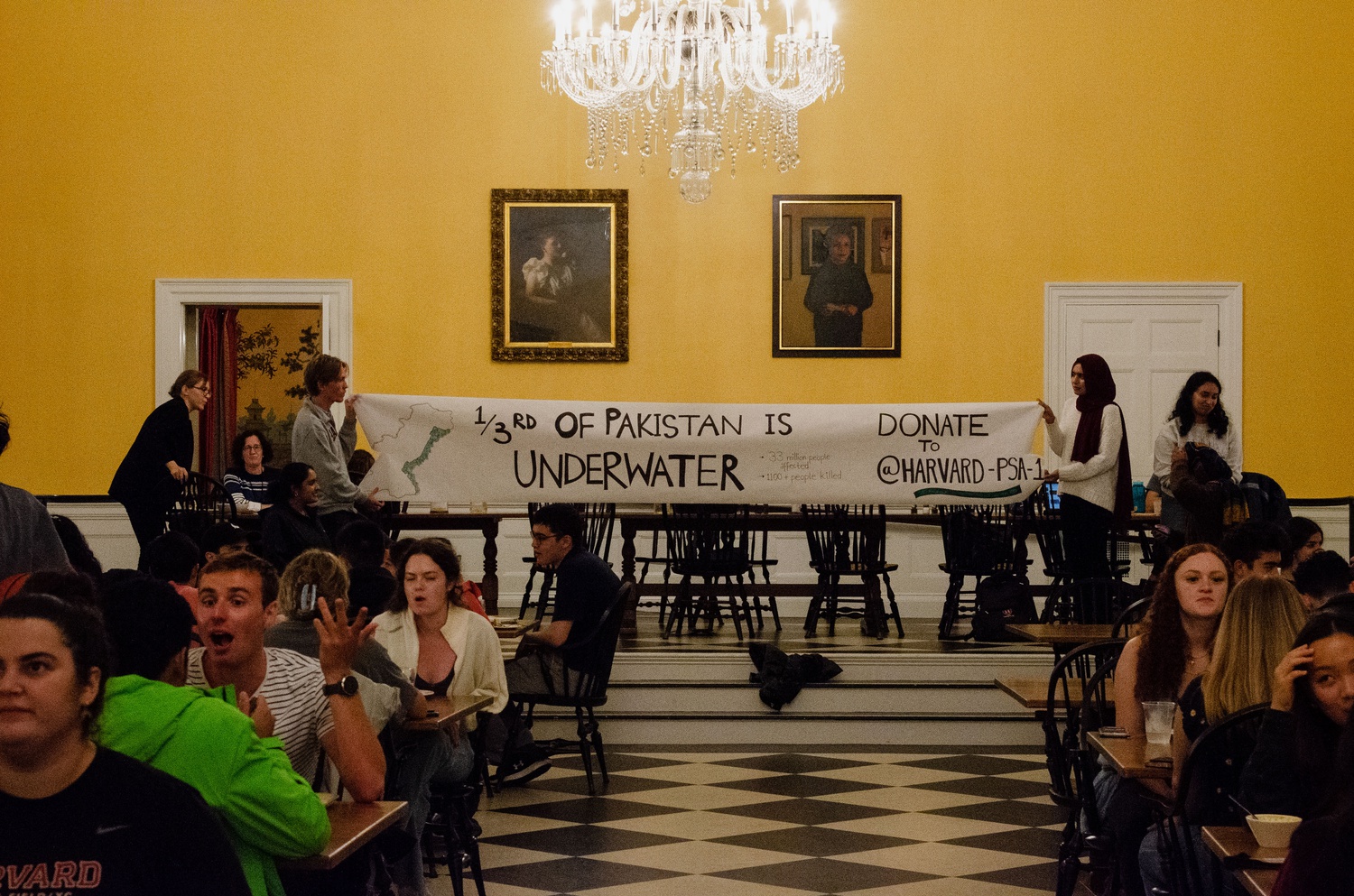 Students from the Pakistani Student Association asked students dining in Lowell House to support efforts to provide disaster relief in the country following devastating floods. By Joey Huang
By The Crimson Editorial Board
This staff editorial solely represents the majority view of The Crimson Editorial Board. It is the product of discussions at regular Editorial Board meetings. In order to ensure the impartiality of our journalism, Crimson editors who choose to opine and vote at these meetings are not involved in the reporting of articles on similar topics.

One-third of Pakistan is underwater. It’s a figure that’s difficult to grasp, but one you’ve likely seen regularly in recent days: Our peers in the Harvard College Pakistani Students Association, or HCPSA, tirelessly organized to raise awareness and money for those affected, papering our campus with flyers and attempting to enlist the support of other organizations.

The intensity of their advocacy matches the severity of Pakistan’s plight. In recent weeks, an unusually strong monsoon season resulted in massive flooding across the country of over 225 million. The floods have damaged infrastructure and destroyed crops, displacing millions of people and claiming thousands of lives. Those numbers, and the associated suffering, will only rise day by day.

Since the beginning of the crisis, the HCPSA has advanced an ambitious flood relief fundraising campaign. Members have camped out in common areas from the Smith Campus Center to individual dining halls. They’ve sent emails and reportedly raised over $20,000. They’ve also asked faculty for support and expressed disappointment with the underwhelming College response. When HCPSA asked faculty deans to extend support on house mailing lists, that relatively modest step proved too much for many of them.

Of course, we as a student body need not look to our administrators for guidance on which causes to support. We have the agency to support our peers — as many already have support HCPSA — when they rally for a clearly worthy cause. And yet, our agency doesn’t relieve Harvard administrators of their duty to get this question right: How should the University respond to instances of international crisis?

We understand the objection that showing even symbolic support for any one cause necessitates the exclusion of others. While Harvard is an institution of global influence, it is surely free of the obligation to advocate for every worthy cause across the globe. Some might argue that an intermediate stance of amplifying some causes but not others is untenable, inevitably unfair to a myriad of conceivable struggles.

But we can, and indeed must, draw a line without disrespecting those it excludes. What differentiates the HCPSA’s efforts is not simply the worthiness of their cause but also the intensity of their efforts. When students rally in large numbers and at length for a worthy cause, administrators have strong reason to consider taking small steps to recognize that cause and the effort it engendered.

Doing so helps bring attention to causes that deserve our support; it models the values of our community. If Harvard wants to be known as an institution that drives global change, it should adopt attitudes toward student activism reflective of that goal.

Of course, we hope that the catastrophe in Pakistan arouses more than the modest symbolic support of our faculty deans and administrators. The carnage we see (or should see) in the news can serve as a reminder of the terrible cost of climate change and the horrific iniquity of who suffers the consequences. It should, in turn, encourage Harvard to redouble its extensive efforts to explore the effects of climate change and the nature of possible solutions. Developing nations will suffer the brunt of the impact of climate change. A global Harvard will recognize that inequity and strive to combat it.

These are lofty goals. In the meantime, all we ask for are a couple of emails.