‘Distressful’ and ‘Devastating’: Ukrainian Students Speak Out on Invasion 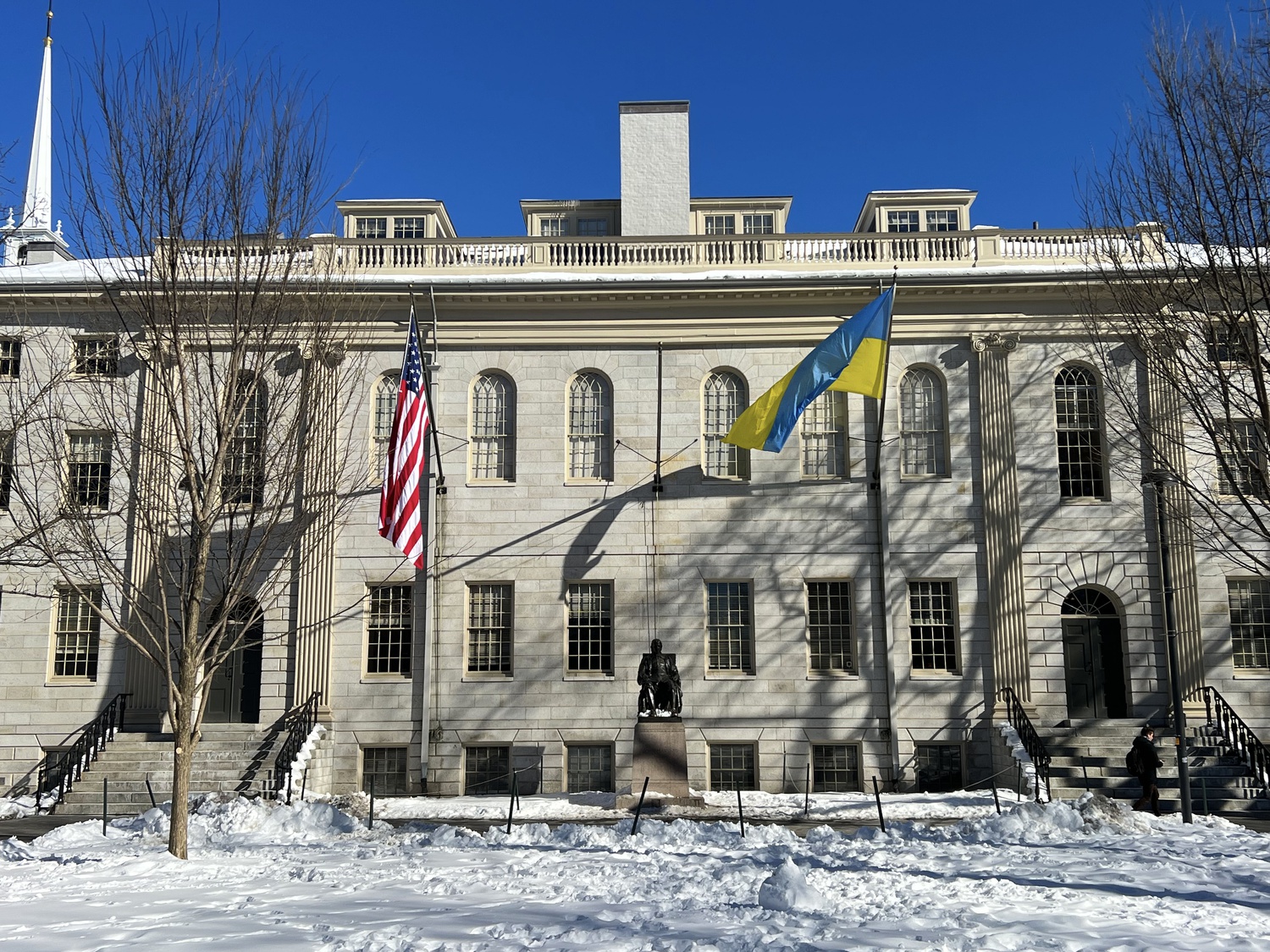 Harvard put up a Ukrainian flag on University Hall today in order to show its support for Ukraine. By Cory K. Gorczycki
By Ashley R. Ferreira and Omar Abdel Haq, Crimson Staff Writers

Nika Rudenko ’24, a sophomore from Ukraine, said hearing about her family's experiences abroad while trying to keep up with her academics has been “distressful”.

“My brother wanted to walk his dog with his son, and they were in the park when they saw nearly 30 military Russian jets flying over them,” she said. “Because there is a strategic point near the house where they live, they started bombing that military airport, and my brother was forced to cover his son with his body and just hide in that park for about an hour and a half."

Like Rudenko, other Ukrainian students on Harvard’s campus have struggled to process the unfolding crisis in Ukraine, five days after Russian President Vladimir Putin invaded the country.

Calling the situation “devastating,” Yegor Tverdokhlibov ’25 — whose parents and sister are currently in Ukraine — said he has not been able to fully focus on his academic responsibilities since the conflict began last Thursday.

“It’s been four days since I stopped doing anything,” he said. “I could not concentrate on work.”

Tverdokhlibov added he faces an “imbalance” trying to stay on track with his academics as a student while maintaining a commitment to his country as a Ukrainian.

“I'm torn apart because I also want to help my country,” Tverdokhlibov said. “I don’t want to feel helpless — I want to feel like I’m supporting my people there.”

Other students have also expressed similar worries about staying on top of their schoolwork while keeping up with their families in the line of fire.

“I’m alone, and I have to deal with so many things right now, considering that my family is still there,” Rudenko said. "I also have to think about my academics.”

Though Natalka A. Bowley ’23 hails from Canada, she has many friends and extended family members still in Ukraine.

Bowley said she has experienced a mix of “numbness,” “anger,” and “sadness” about the situation as she receives news updates on the conflict.

“I saw pictures of my friend’s house being bombed, and it’s just completely unbelievable,” Bowley said.

Bowley added that while she worries when her family members in Ukraine lose touch, she understands that their priorities are to stay safe.

“Sometimes people will go offline for a really long time,” she said. “Talking to us about how they’re doing isn’t necessarily their greatest priority — it’ll be hiding or getting food, or something else, and they won’t keep in touch.”

Georgiy A. Kent ’22 also said he was “saddened but not surprised” by the invasion and concerned for the safety of his friends and family, including his mother and sister, who fled from Ukraine to Poland at the onset of the invasion.

Kent is currently writing his senior thesis on Russia’s forcible annexation of Crimea but added that Russia’s invasion has actually forced him to change course on his thesis.

“I’m two weeks away from my deadline, and they decide to invade the freaking country,” Kent said. “I’m operating under the assumption that Russia has not launched a full-scale, conventional assault on the entirety of the country.”

On Monday, the University President Lawrence S. Bacow gave opening remarks at a panel co-sponsored by the Davis Center for Russian and Eurasian Studies and the Ukrainian Research Institute. He condemned Putin’s “deplorable actions” and “wanton aggression” and spoke in support of Ukraine.

“Harvard will continue to support in whatever ways we can members of our community who face grave uncertainty,” Bacow said. “We will continue to share knowledge of Ukraine and advance understanding of its culture, history, and language.”

On Monday, Harvard hung a Ukrainian flag on University Hall in solidarity with Ukraine.

Harvard College Dean Rakesh Khurana also condemned the invasion in an emailed statement to The Crimson.

“The effects of these egregious attacks have already had a profound impact on people worldwide, including members of our community,” Khurana said. “I deplore this violence and the human cost of such aggression, and I stand in support of our community members at Harvard, Ukraine, and around the world.”

—Staff writer Ashley R. Masci can be reached at ashley.masci@thecrimson.com.