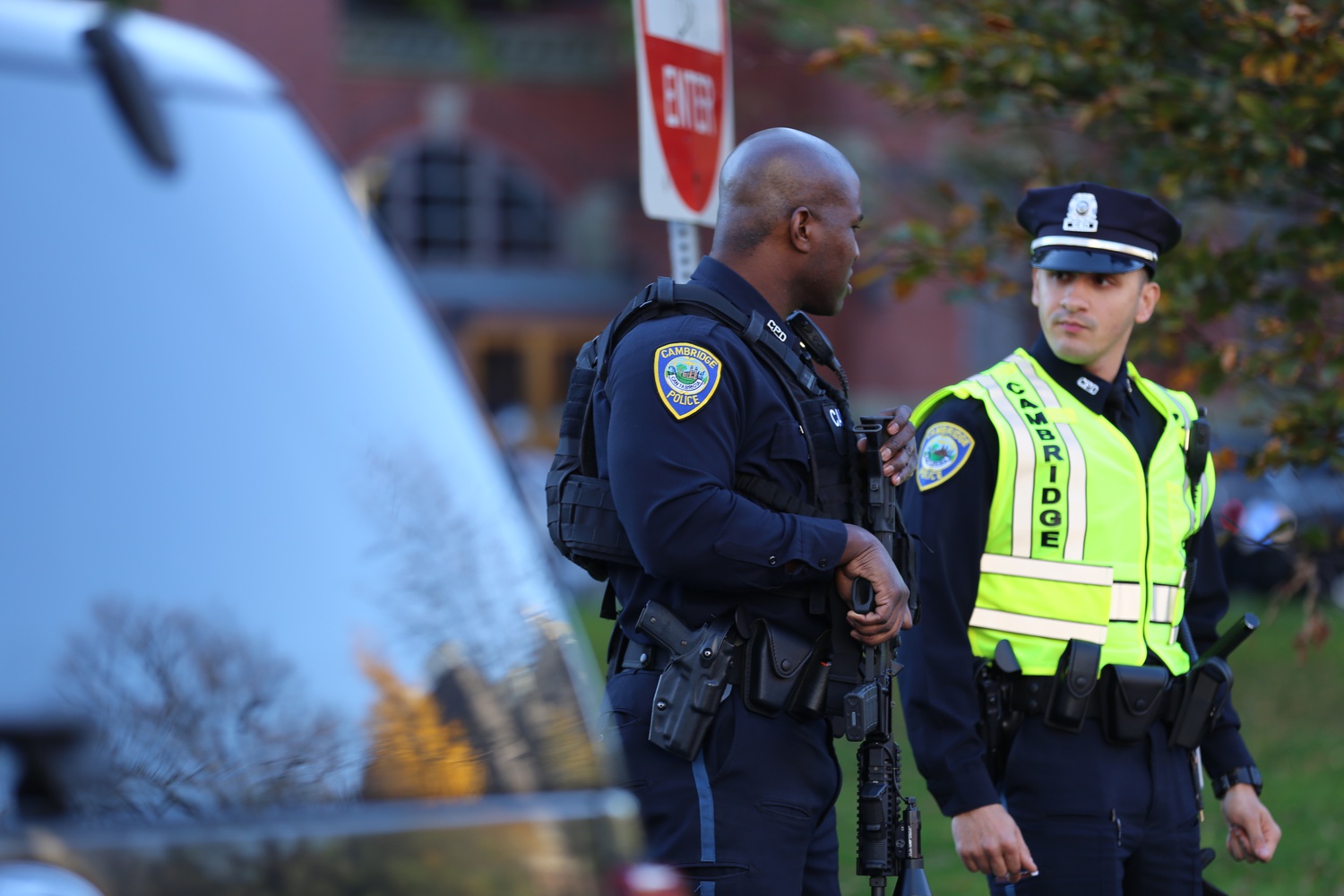 The Cambridge Police Department committed earlier this year to reduce its inventory of long guns and less-than-lethal weapons by 20 percent and 30 percent, respectively. By Lauren A. Sierra
By Raquel Coronell Uribe, Crimson Staff Writer

The Cambridge City Council earlier this month rejected a policy order on police demilitarization proposed by Councilor Quinton Y. Zondervan that sparked bitter debate among both activists and politicians in Cambridge.

Zondervan, who chairs the council’s public safety committee, proposed a policy order that called for the “destruction and recycling” of all rifles and shotguns, and the “elimination” of Cambridge Police Department’s Lenco BearCat — a $350,000 armored vehicle which the Department acquired through a Department of Homeland Security grant.

CPD previously faced backlash for its possession of military-grade equipment, which came to light after the department supplied the city with an inventory of its possessions in 2020 following Commissioner Branville G. Bard, Jr.’s statement that CPD did not possess military equipment. Bard later clarified, however, that he meant the department “did not possess materials that are only restricted to the military by law.”

In February, the Cambridge Chronicle first reported that CPD would be reducing its inventory of long guns and less-than-lethal weapons by 20 percent and 30 percent, respectively. The department also announced the retirement of camouflage uniforms used by officers.

Zondervan’s policy order stated that this move “does not go far enough to address calls to demilitarize the police” and requested City Manager Louis A. DePasquale work with CPD to present a plan to the Council for further demilitarization ahead of the next fiscal year’s budget hearings.

City councilors opposed Zondervan’s policy order, and instead Councilor Marc C. McGovern proposed an amended version, which passed 8-1 on May 3. Zondervan was the only councilor to vote against.

Whereas Zondervan’s order called on CPD to purge all “rifles and shotguns,” as well as the armored vehicle, McGovern proposed the city manager work with Bard to follow up CPD’s February goals.

Spokesperson Jeremy C. Warnick wrote in an emailed statement that CPD will keep interested parties informed of any developments via an annual inventory report or City Council meetings.

“In terms of inventory, we will continue to keep the community informed of any developments via our annual inventory report and at future City Council and/or public safety committee meetings,” Warnick wrote. “That said, Commissioner Bard and the Cambridge Police have demonstrated an openness and willingness to be at the forefront of meaningful police reform.”

Cambridge resident and activist Loren Crowe, an Army veteran who worked with Bard on his February demilitarization announcement, took to Twitter the next day to criticize Zondervan’s policy order, calling it “grandstanding” and “counter-productive.” He also argued that Bard had taken steps to demilitarize previously on his own volition.

“But every time Bard has announced steps he's taking to demilitarize CPD, Councillor Zondervan has responded with pure petulance,” he wrote. “When a public official does something good, you might offer a little positive reinforcement. Not doing so makes it seem like you'll never be happy.”

Crowe said in an interview that the order was “counterproductive” because Zondervan asked CPD to dispose of all rifles and shotguns, which Crowe said he believes is too extreme and “discredits” the demilitarization movement. He also said he believes demilitarization is more about a militarized “culture” than the possession of specific weapon systems.

“I think that Cambridge, at the end of the day, could be fully demilitarized and would still have a SWAT team,” he said. “It still needs to have the capability to respond to certain kinds of incidents.”

Crowe also tweeted that Zondervan did not consult with CPD prior to his policy order.

In an interview with The Crimson, Zondervan said it was untrue he did not consult with CPD, citing a Jan. 6 public safety committee hearing he chaired. During that meeting, Bard gave a presentation on CPD’s weapon arsenal and made his case as to why CPD needed certain weapons.

“After meeting with the commissioner and after the committee hearing, it was pretty clear to me that police and the city manager have no intention of getting rid of these weapons,” Zondervan said.

ACLU of Massachusetts staff attorney Daniel McFadden said in an interview that full demilitarization does not have a “single definition.” He added, however, that some of the different aspects of militarization involve the equipment police have access to, their use of “war tactics,” and the language surrounding policing.

“You often hear about police who refer to non-police as civilians, but of course, we’re all civilians,” McFadden said. “So this idea that there’s a separation between the police and the population that they’re policing also is a component of militarization.”

Tapti Sen, an activist with The Black Response — a Cambridge group calling for the defunding and abolishing of CPD — said in an interview prior to the May 3 vote that she was “optimistic” the reform would eventually take place. Sen said at the time that if the order did not pass, The Black Response would continue to advocate for demilitarization.