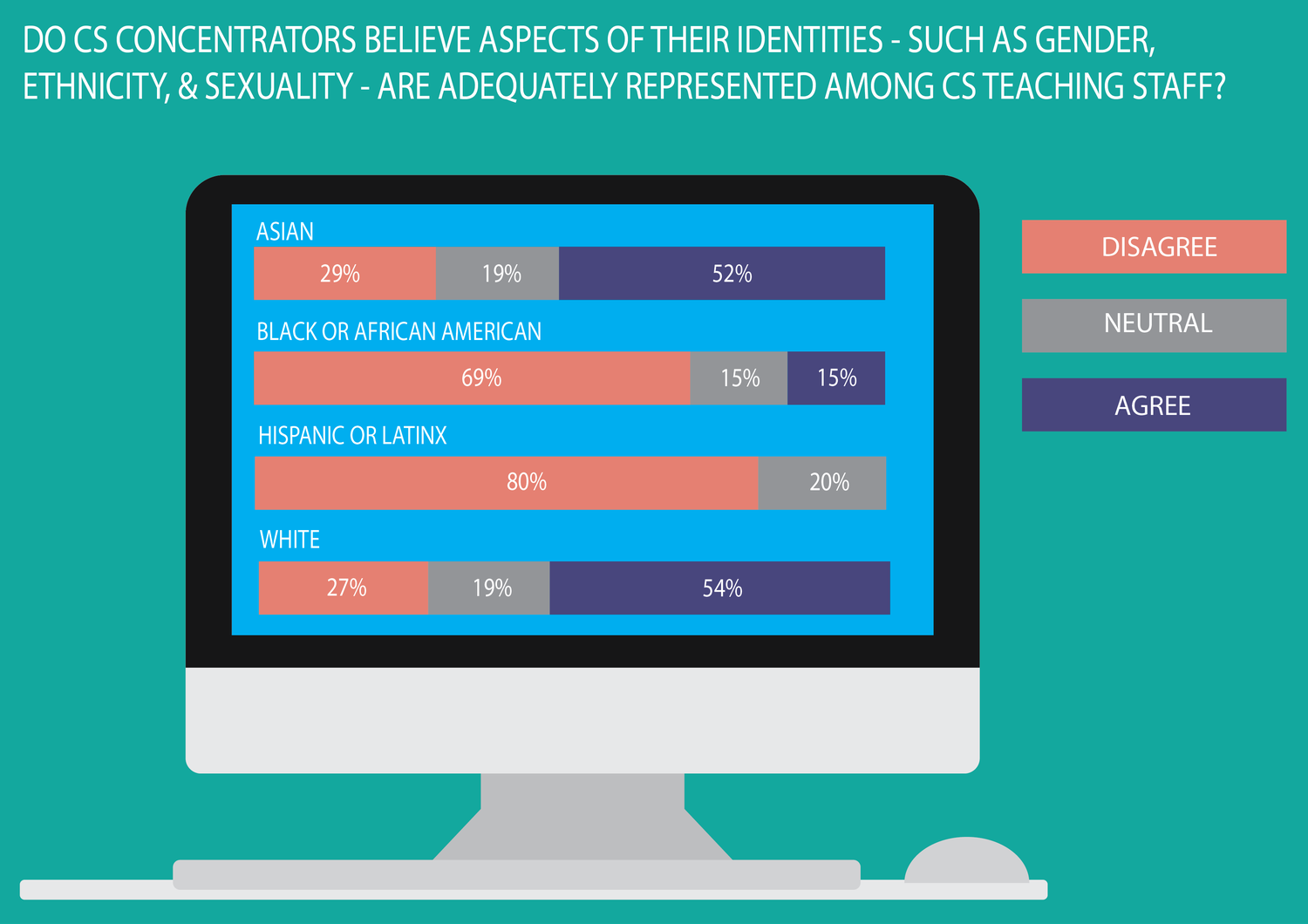 Underrepresented minorities concentrating in Computer Science were much less likely to report a sense of representation among the teaching staff in a survey conducted by student advocacy group Harvard Women in Computer Science. By Annabelle G.Y. Lim
By Justin Lee and Lauren L. Zhang, Crimson Staff Writers

Widespread disparities based on gender, ethnicity, and other factors of identity persist in undergraduates’ experiences in computer science at Harvard, according to a report published Friday by the student advocacy group Harvard Women in Computer Science.

The survey asked undergraduates “from all disciplines and backgrounds” questions concerning their previous exposure to and academic engagement with computer science. The survey, which received more than 300 responses in fall 2020, also asked questions related to discrimination and representation.

Of survey respondents, 64.9 percent of non-male Computer Science concentrators indicated that they disagreed with the statement “I feel comfortable asking or answering questions during lecture,” compared to only 23.3 percent of male concentrators.

The report also found non-male computer science concentrators reporting facing discrimination at a higher rate than their male counterparts — a disparity that the report found across all concentrations but one that was heightened within the Computer Science department, per the report.

In addition, underrepresented minorities concentrating in Computer Science were more likely to report ethnicity-based discrimination than their white and Asian peers.

No Hispanic or Latinx Computer Science concentrators reported that they feel a “sense of representation among the teaching staff.” According to the report, 69.2 percent of Black or African American concentrators disagreed.

To strengthen belonging among underrepresented minority students, the report recommends the department “prioritize representation among the student teaching staff for CS courses during the hiring process, especially for foundational courses.”

Computer Science chair Eddie Kohler wrote in an email that the department is “grateful” that Harvard Women in Computer Science conducted the survey and that faculty will meet with the student-led group to discuss the report further.

“CS and SEAS care about diversity, representation, and supporting all our students,” Kohler added, referring to the School of Engineering and Applied Sciences, in which the department is located.

Kohler also noted that the department has implemented initiatives designed to diversify its teaching staff, including “inclusive TF training and outreach to broaden TF representation.”

Cassandra Kane ’21, lead author of the report, said quality of advising was a crucial factor in concentrators’ experiences within the Computer Science department.

Both non-male and first-generation low-income concentrators are less likely to pursue, or even consider, a graduate degree in computer science, per the report. Only 15.2 percent of male Computer Science concentrators had not considered applying to graduate programs, compared to 37.5 percent of their non-male counterparts.

The report builds off a previous advocacy survey report the organization published in 2015.

“There were some pretty significant ways that inclusivity within this department had improved compared to the results we found in 2015. That was certainly an encouraging result,” Kane said.

The 2020 report showed a marked improvement in gender parity in computer science exposure and course enrollment.

The 2020 results, in contrast, found that many Computer Science course categories have more than 50 percent non-male enrollment — though they noted that result was likely affected by sampling bias — and that there were no significant differences between when male and non-male students were first exposed to computer science.

Kane noted, however, that the survey found that there is still a “shocking amount of disparity” present on the basis of gender, ethnicity, FGLI-status, and BGLTQ identification.

Computer Science concentrator Maegan Jong ’23-24 said the report’s finding that non-male students are less comfortable participating in lectures “resonated” with her. She explained that she is sometimes hesitant to ask questions in lecture due to her perception that she has had less prior exposure to computer science than her peers.

“CS wasn’t something that I was completely unfamiliar with, but I was definitely not at a point where I was super confident in my abilities,” she said.

Computer Science concentrator Sarika Chawla ’23, who identifies as a disabled woman of color and a member of the BGLTQ community, said she would benefit from seeing more people like her in teaching roles within the Computer Science department.

“Seeing more people represented like myself who make it very clear that I can reach out to them — as well as just creating more explicit pathways for people who have just not had the chance to have as much experience in computer science, like me, due to being part of marginalized groups — would really be helpful in kind of bridging this gap,” Chawla said.

Kane said she believes the report surfaces inequalities within computer science at Harvard that have not received sufficient attention.

“There are some that I’m aware that this department already has a sense of and is working towards, and there are others that I don’t think the CS department, to my knowledge, has really thought about or identified as an issue area,” she said regarding inequities in computer science. “I think the 2020 report really uncovered disparities that hadn’t really previously been studied.”