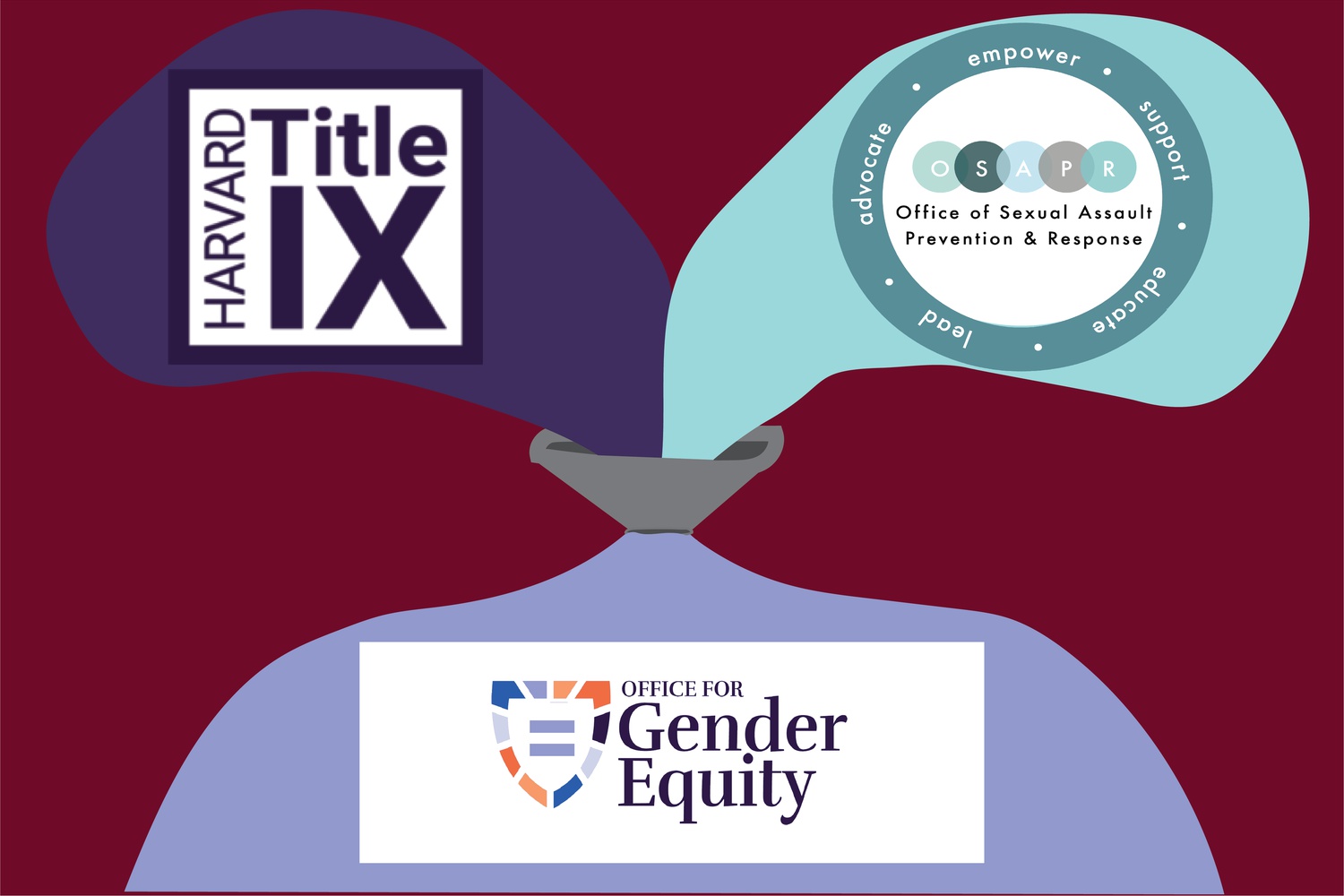 Harvard will dissolve the University’s Title IX Office and the Office for Sexual Assault Prevention and Response and move its sexual harassment and assault resources under one entity — the Office for Gender Equity — which will be supervised by the central administration.

The move to form the Office for Gender Equity, which will be “fully operational” later this summer, comes after a February external review found that the decentralization of Harvard’s sexual- and gender-based harassment resources inhibited the University’s response to harassment claims against former Government professor Jorge I. Domínguez over a span of four decades.

In an email to Harvard affiliates announcing the changes Wednesday afternoon, University Provost Alan M. Garber ’76 cited both the February external review and a 2019 survey that found levels of campus sexual assault unchanged over the previous four years.

Garber wrote that he hopes the new office “will further advance Harvard’s commitment to providing an environment where each of us can feel safe to participate fully in the life of the University, whether we are studying, teaching, conducting research, or working in other ways.”

The change will result in the elimination of three positions in Harvard University Health Services, according to an email obtained by The Crimson that was sent to staff from HUHS Director Giang T. Nguyen Wednesday morning. He wrote that HUHS will work to “facilitate transfers” for those staff members “to the extent there are open positions at HUHS.”

Erin J. Basler, an education and community engagement specialist at OSAPR, said in an interview with The Crimson Wednesday evening that she was told Tuesday she would be laid off in late May, and given no information about a potential transfer to another HUHS position.

Basler expressed concerns about the speed at which the University decided on the new office structure.

“There were a lot of options of how we could demystify and streamline services on campus, while still maintaining confidential privileged services for the students,” she said. “The idea of having a singular office that deals with all of these things needs to be done with careful consideration and intentionality.”

University Title IX Coordinator Nicole M. Merhill told the Harvard Gazette, a University-run publication, that her office engaged in conversations with faculty, staff, postdoctoral candidates, and students groups on how to improve Harvard’s sexual harassment response procedures. But Basler told The Crimson she was unsure about the effectiveness of the outreach efforts.

“The questions that were asked by Title IX and [HUHS’s Department of Health Promotion and Education] — representing OSAPR — in those meetings could have focused more on how to mitigate barriers, rather than the public perception of the office,” Basler said.

Basler said Merhill and HUHS Senior Director of Nursing and Health Promotion Maria Francesconi met once with her and the rest of OSAPR’s staff in late February to solicit their input on the merger.

“That was the only time I specifically was asked for my opinion,” Basler said.

In a statement Thursday morning, University spokesperson Nate Herpich wrote that Harvard “has engaged with community members with the primary purpose of examining the resources related to sexual harassment (including sexual assault) and other sexual misconduct.”

“Community feedback combined with the AAU data, which showed a need to improve upon community knowledge of the resources and services available, as well as the Report of the External Review Committee, solidified our need to make significant changes to better meet the needs of our community members,” he wrote.

The new Office for Gender Equity will bring together the services previously offered by the Title IX Office and OSAPR, including incident disclosure and filing of formal complaints, direct crisis counseling, prevention and education programs, and psychoeducation services.

Undergraduates, graduate students, postdoctoral candidates, and staff will have access to the office’s resources.

The Title IX Office currently reports to the Provost’s Office, while OSAPR is housed within HUHS. Under the new consolidation, the Office for Gender Equity will report directly to the Office of the President and the Provost, despite continuing to offer some clinical services.

Confidential crisis counseling services and a 24-hour hotline will be offered by the office through Sexual Harassment/Assault Resource Education counselors. Currently, numerous universities — such as Yale, Princeton, and Stanford — house harassment response resources under similar programs.

SHARE will also feature the addition of a new expert staff member dedicated to restorative practices and counseling individuals who have caused harm, Merhill told the Harvard Gazette.

Merhill will head the new Office for Gender Equity.

Along with the new office, the University plans to launch a centralized data hub website this summer, which will provide and analyze data on programming, disclosures, and formal complaints.

The merger comes after significant staff turnover at OSAPR over the last year, including the August 2020 departure of the office’s director, Pierre R. Berastain Ojeda ’10. The University did not fill his vacancy, though it came during a University-wide hiring freeze implemented during the pandemic. Since Berastain’s departure, two OSAPR staff members have also departed Harvard, according to archived records of the office’s website.

Berastain wrote in a text message Wednesday afternoon that the Office for Gender Equity has the potential to simplify Harvard’s sexual assault and harassment reporting system.

“If executed intentionally and through the lens of survivors, a centralized office could make it easier for people to navigate the complex systems that a survivor encounters,” Berastain wrote. “I hope that the new office’s make up reflects the richness and intersectional demographics and lived experiences of our Harvard community.”

The changes come as the Biden administration is reviewing the Department of Education’s Title IX policies, which were overhauled under the Trump administration to strengthen the rights of individuals accused of harassment.

Trump’s Education Secretary, Betsy D. DeVos, released a long-anticipated directive last May overhauling how schools must handle harassment complaints and narrowing the definition of sexual misconduct. President Joe Biden pledged to reverse DeVos’s directive on the campaign trail in 2020, but, despite his executive order to begin reviewing the Trump-era policies, it is unclear what the timeframe for doing so will be.

Harvard affiliates can continue to seek services from the Title IX Office and OSAPR until the Office for Gender Equity’s launch this summer, Garber wrote.

The Office for Dispute Resolution — which investigates formal Title IX complaints — will remain a separate entity. It also reports to the Provost.

A simultaneous structural change at HUHS will also integrate the Office of Alcohol and Other Drug Services into the Center for Wellness and Health Promotion, according to the email from Nguyen. The Center will provide holistic services at the intersection of drug and alcohol use and physical and mental wellbeing.