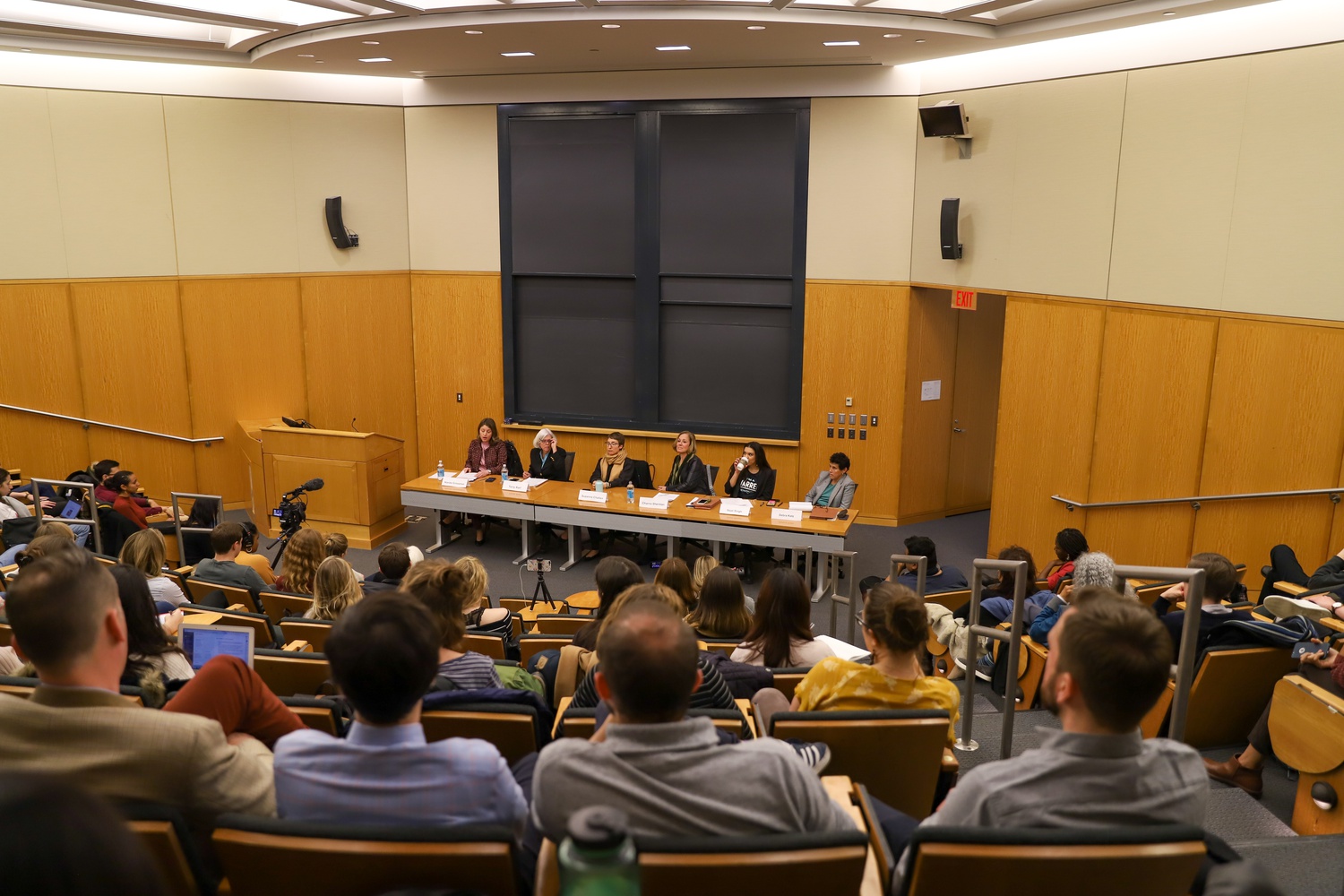 Four women who accused former Government professor Jorge I. Domínguez of sexual misconduct speak at a panel at Harvard in February 2020. By Ryan N. Gajarawala
By Meera S. Nair and Andy Z. Wang

Two women who were victims of sexual misconduct by former Government professor Jorge I. Domínguez criticized the findings of an external review into Domínguez’s misconduct and urged the University to take stronger measures to address sexual harassment.

In 2018, the Chronicle of Higher Education published a pair of articles in which 18 women publicly accused Domínguez of repeated acts of sexual misconduct, establishing a pattern that extended across four decades. The University had, in fact, found Domínguez guilty of sexual harassment against former Government assistant professor Terry L. Karl in 1983.

The external review identified failures in Harvard’s enforcement of its own sanctions against Domínguez following Karl’s complaint. Following an investigation, then-dean of the Faculty of Arts and Sciences Henry Rosovsky prohibited Domínguez from receiving administrative appointments for the next three years. Yet just two years later, in 1985, Dominguez was appointed to chair the Special Appointments Committee in the Government department and the FAS Foreign Cultures subcommittee of the Core Curriculum.

In a Monday emailed statement to The Crimson, Karl disputed the report’s conclusion that, “for its time,” the University’s response to her complaint in 1983 was “appropriate and admirable in many ways.”

“In the Dominguez case, for example, using the ‘times have changed’ excuse is misleading,’” she wrote. “Yes, the Women’s Movement, Anita Hill, MeToo, and the actions of Harvard women and a few of its highly appreciated men have changed the culture. But in 1980, as stated above, the Harvard administration knew that sexual harassment was illegal and further knew that its actions were wrong.”

Karl also contested the report’s finding that a failed institutional memory enabled Domínguez’s sexual misconduct to persist, pointing to a report on sexual harassment at Harvard by then-Associate Dean for Undergraduate Education Sidney Verba ’53 presented to the Faculty Council in September 1983.

“This knowledge has been ‘at Harvard’s fingertips since 1983,’ one person wrote to me, and all subsequent Harvard administrators as well as the department chairs ‘knew or should have known’ the pervasiveness of harassment,” Karl wrote.

Karl further wrote that Harvard did not respond effectively to complaints raised about Domínguez, enabling him to rise in Harvard’s ranks and gain influence.

“By ignoring this history, remaining silent or covering up, Harvard permitted Dominguez to continue to harass students, staff and at least two other non-tenured faculty for almost four decades while eventually being promoted to Vice Provost,” Karl wrote, referring to Domínguez’s appointment as inaugural Vice Provost for International Affairs in 2006. “The damage to uncounted women and the loss of their scholarship and success has been enormous.”

In a Wednesday interview, University President Lawrence S. Bacow said that Harvard would create a “centralized process” to access personnel records, after the external report stated Harvard’s decentralized structure “could have impeded” efforts to vet Domínguez for leadership positions.

However, Charna E. Sherman ’80, a former Government concentrator who was harassed by Domínguez, wrote in an emailed statement that centralizing personnel records would not address structural issues that “systemically protect” those in power committing acts of sexual misconduct.

At Harvard, anonymous disclosures of sexual misconduct can be made to Harvard’s Title IX office, but only formal complaints are investigated by the Office for Dispute Resolution, which determines whether a policy violation has occurred.

“In line with due process requirements, disciplinary actions can only result from formal investigations,” the external committee report states. “While disclosures are recorded in the Title IX Office, they cannot be accessed for personnel decision-making.”

Karl added that while she was “appreciative” of the apology that Bacow issued to her alongside the report last week, she did not feel vindicated by it.

“Vindication comes from the gratification women feel in trying to protect others and themselves – whether we get it or not,” she wrote.