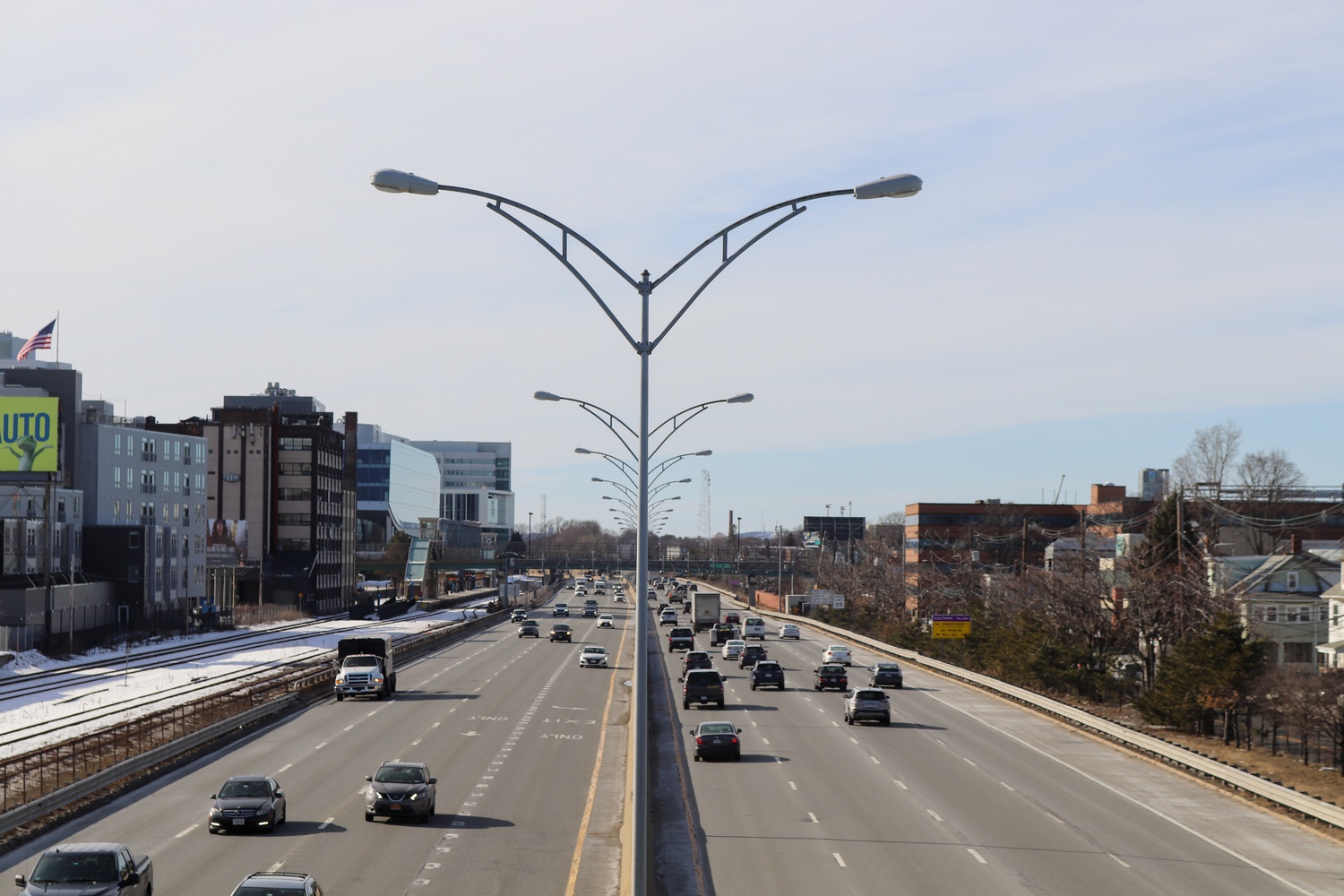 The Allston Multimodal Project would make major improvements to the I-90 corridor in Allston, but state officials have indicated the project could be scaled back if Boston and Harvard do not agree to provide more funds. By Santiago A. Saldivar
By Maribel Cervantes and James R. Jolin, Crimson Staff Writers

As questions arise over funding for the Massachusetts Turnpike project in Allston, state officials and local residents said they are considering residents’ quality of life along with the project’s funding sources and biggest beneficiaries.

Harvard has already committed hundreds of millions of dollars to the project — formally known as the Allston Multimodal Project — which will replace the aging viaduct along Soldiers Field Road, straighten the Massachusetts Turnpike that runs through Allston, and clear up 130 acres of Harvard-owned land for development.

It will also improve bicycle and pedestrian pathways, establish the West Station stop on the Framingham/Worcester commuter rail line, and create more green spaces along Charles River, per the state’s Department of Transportation website.

In January, state transportation officials indicated that they would scrap most of those plans and only move forward with repairs to the current viaduct, unless Boston contributed funding to the project and Harvard forked over additional funds. Several days later, the state’s transportation oversight board loosened that stance, voting to “examine” whether it would require additional third-party funding, rather than outright require it, according to the Boston Globe.

Harvard has not indicated whether it would agree to provide more money to the project.

Massachusetts State Rep. Michael J. Moran, a Brighton resident, said his views are “very much in line” with Harvard’s vision for the project regarding the highway straightening and the creation of West Station.

Moran noted that Harvard will be the “single biggest beneficiary” from the development — including the West Station planned in Allston.

The University has already committed $58 million in direct support of the construction of West Station, in addition to its funding toward other aspects of the project.

Moran added that he believes the new Biden administration will help hasten the project.

“This new president in office, I think, is going to only help us as we try to have this project come to fruition,” Moran said. “Whether that be additional federal funds, whether that be legislation that helps move the process move along a little quicker.”

Chris Osgood, Boston Chief of the Streets, Transportation, and Sanitation, wrote in an email to The Crimson that the Allston Multimodal project is “transformative.” He added that Boston is in communication with the Massachusetts Department of Transportation, residents, and community institutions concerning funding and design.

“Given the new Federal administration in Washington DC and its focus on infrastructure, and given all the benefits of this project, we would recommend focusing there first for 3rd party support,” Osgood said.

Moran said he is concerned that residents may have “to live through a lot of years of construction.” He added that he is focused on preserving the quality of life for residents during the span of the project, and is thinking about how to manage parking, construction work hours, and keeping truck routes out of the neighborhood.

Anthony P. D’Isidoro, president of the Allston Civic Association and a local resident, said he supports the Turnpike project and all the improvements it entails for public life.

“A successful Allston I-90 project, with all the modes of transportation that we’re looking to implement and improve, would have a resounding impact, in many ways, on the local economy, on job creation, on housing—you name it,” he said.

He spoke in particular about the economic potential of establishing a connection between West Station and Kendall Square, where there are many job opportunities.

“It’s really a once-in-a-generational opportunity to really make an impactful statement regarding regional transportation in the area and really focus on a better path forward,” he added. “We need a more balanced transportation system, and this is the way to do it.”

Despite the transportation opportunities the project presents, D’Isidoro said he feels the Massachusetts Department of Transportation’s handling of the development has been “erratic.”

Part of his concern, he said, stems from the Department’s recent request for increased funding for the project from Harvard.

Though D’Isidoro said he is skeptical Harvard would back out of the project due to the “substantial financial benefits” the University would gain from the increase in developable land, he said he fears disagreement over funding.

“If we can’t reach agreement and get funding, they may just reduce it back down to just a viaduct repair project and take another look at it 10 years from now,” D’Isidoro said. “It would be an enormous mistake. A massive mistake.”

D’Isidoro added that he worries such disputes would force the Department to exercise a “no-build option,” which would include only a renovation of the viaduct and none of the amenities D’Isidoro believes would benefit Allston.

Despite funding disagreements, D’Isidoro said he remains determined to ensure that the state delivers the project, with all its amenities.

“This project is personal to every resident of Allston; this is a once-in-a-generation opportunity to fix a lot of mistakes that were made along the line,” he said.

“Allston has been on the short end of a lot of things,” he added. “We have to be constantly vigilant, and to speak up when we need to speak up to make things right.”

— Staff writer James R. Jolin can be reached at james.jolin@thecrimson.com.

— Staff writer Maribel Cervantes can be reached at maribel.cervantes@thecrimson.com.