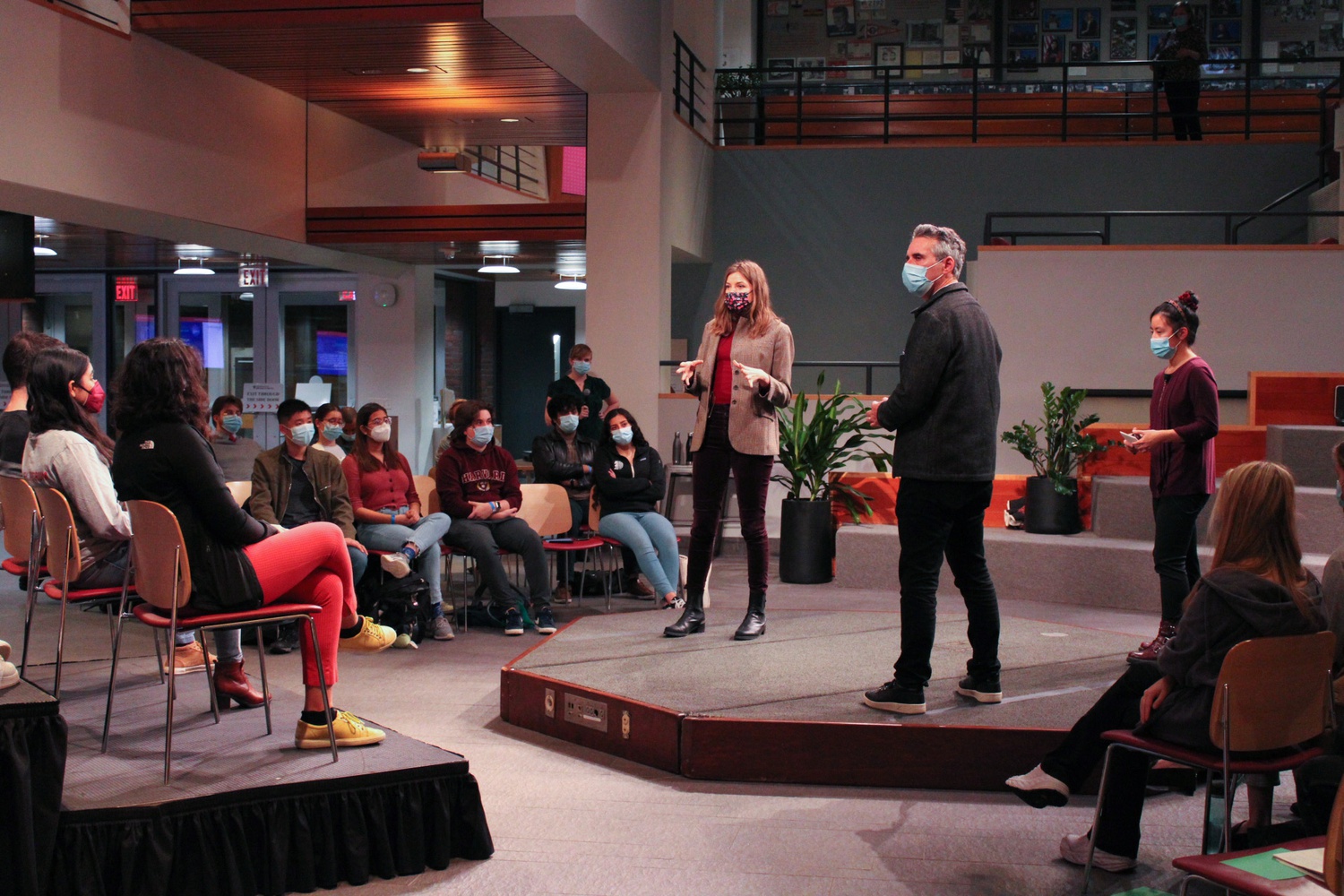 John Della Volpe (middle), director of polling at the Institute of Politics, Jing-Jing Shen '23 (right), student chair of the Harvard Public Opinion Project (HPOP), and Jacqueline M. Alemany '11 (left), congressional correspondent and anchor of "Power Up" at The Washington Post, joined students for a conversation on the results of the Fall 2021 Harvard Youth Poll on Thursday evening at the JFK Forum. By Ryan Nguyen
By Nia L. Orakwue and Rafid M. Quayum, Contributing Writers

Members of the Harvard Public Opinion Project — an Institute of Politics program that conducts a semesterly poll of young Americans — discussed how young people fear for their future at an IOP forum on Thursday.

The forum came one day after the release of the IOP’s fall poll, which found that the majority of young people in the United States view American democracy as “failed” or “in trouble.” The Youth Poll surveys Americans between the ages of 18 and 29 on topics such as climate change, the future of democracy, foreign policy, and Covid-19.

The panel — which was moderated by Washington Post reporter Jacqueline M. Alemany ’11 — featured John Della Volpe, the IOP’s director of polling, and Jing-Jing Shen ’23, who serves as the student chair of the Harvard Public Opinion Project.

“No generation has been through more in a shorter period of time than folks in this room — Gen Z,” Della Volpe said during the forum.

The forum included a panel of IOP student members, who shared personal experiences to contextualize the poll’s data. The survey found that a majority of young Americans face mental health challenges. Just over 50 percent of young people reported feeling down, depressed, and hopeless at least several times in the past two weeks.

“It’s hard to know that all of us feel this way across the national scale, but also, personally, I’m seeing that more with close friends,” said Janna E. Ramadan ’23, the IOP’s incoming student president.

The poll also showed that young people of color are more hopeful for the future of the U.S. compared to their white counterparts. Della Volpe, who is coming out with a book in January about how Gen Z is reshaping U.S. politics, attributed the hopefulness, in part, to Black Lives Matter protests that took place in the summer of 2020 after the murder of George Floyd.

“I think there’s a level of stress and trauma that we picked up in the survey,” he said, noting that a large majority of African Americans reported facing discrimination based on their skin color. “Seeing that they could, with other members of their generation — white, Latino, Asian, Pacific Islander, etc. — band together to come to support Black lives in response to Floyd’s murder, I think made African Americans feel better about this country.”

The poll also revealed an increased awareness of climate change. Fifty-four percent of respondents reported feeling worried about the the issue. Della Volpe said in an interview that he believes unease around climate change may contribute to the overall increase in young people who struggle with mental health.

“Climate and Covid are correlated with overall anxiety and depression,” he said. “I think that the government has addressed many of these issues — through Covid-related aid packages, through the bipartisan infrastructure package. That hasn’t necessarily been communicated well to young people, which is making them even more stressful.”

Shen said she hopes a main takeaway from the poll is Gen Z’s open-mindedness.

“It’s pretty clear that young people respect and value others, even if they look different than themselves or have a different political opinion or just fundamentally disagree,” she said. “The fact that we can have these difficult conversations and we’re open to continue learning — I think that’s really inspiring about our generation.”