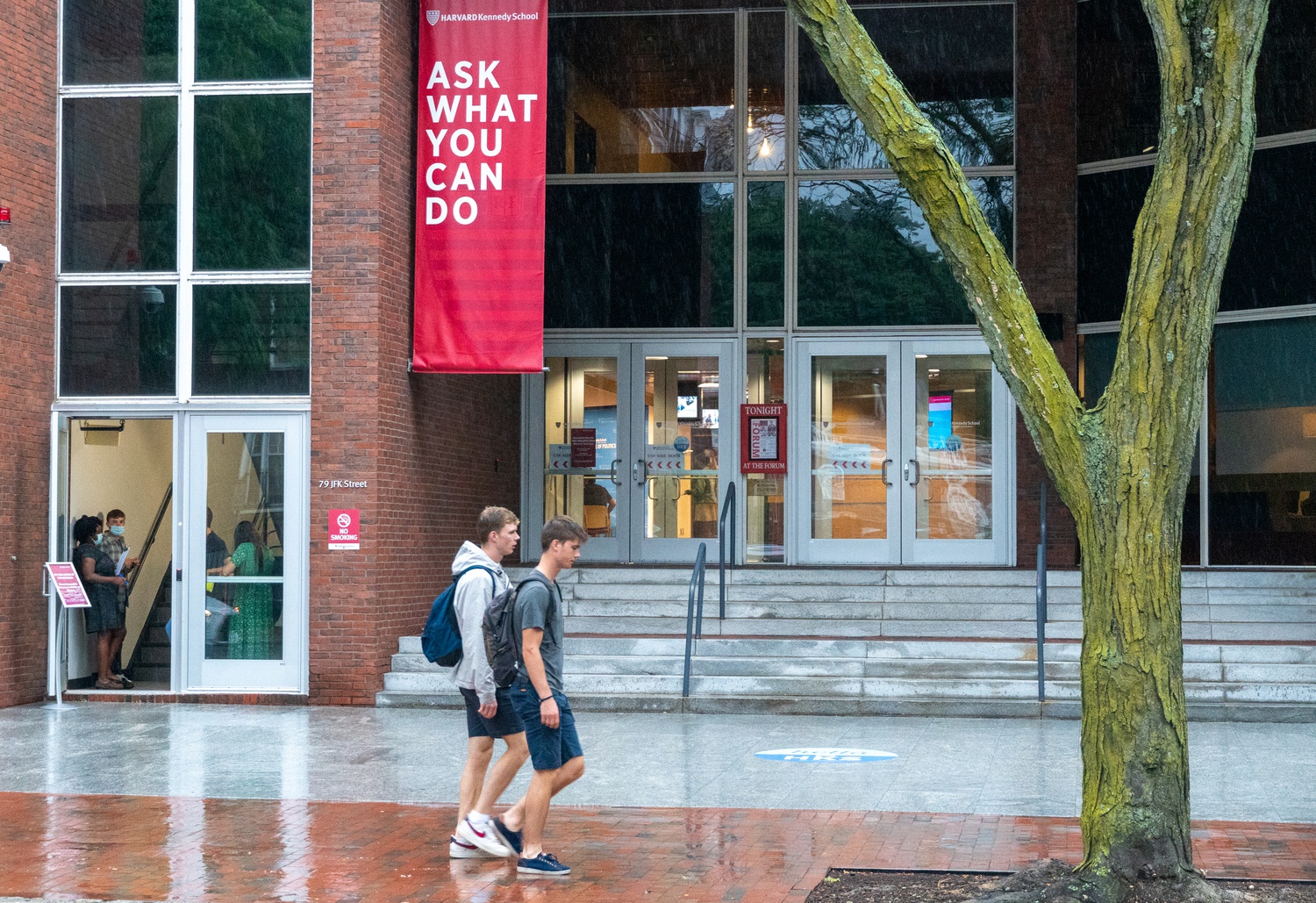 The Institute of Politics at the Harvard Kennedy School has examined the political and social views of young Americans in at least two polls nearly every year for over two decades. By Zadoc I. N. Gee
By Joshua S. Cai and Eric Yan, Crimson Staff Writers

Fifty-two percent of young Americans view the United States as a “democracy in trouble” or a “failed democracy,” according to a Harvard Institute of Politics youth poll released Wednesday.

The IOP’s Harvard Public Opinion Project conducted a nationwide poll of 18-to-29 year olds between Oct. 26 and Nov. 8, surveying 2,109 young Americans regarding their “concerns on their mental health, COVID-19, climate change, and foreign policy,” according to a press release.

The survey marks the 42nd youth poll conducted by the IOP, which has examined the political and social views of young Americans in at least two polls nearly every year for over two decades.

This fall’s poll also found that young Americans have also soured on the job performance of their political leaders. President Joe Biden’s job approval among survey respondents now sits at 46 percent, falling 13 percent compared to the IOP’s spring poll. Young Americans’ approval of congressional Democrats — who currently control both chambers of Congress — also fell from 52 percent in the spring to 43 percent, while congressional Republicans saw their job approval tick up three points to 31 percent.

In the press release, IOP Director of Polling John Della Volpe said the survey results suggest youth are disappointed in U.S. political leaders and concerned about the future of the country.

“After turning out in record numbers in 2020, young Americans are sounding the alarm. When they look at the America they will soon inherit, they see a democracy and climate in peril – and Washington as more interested in confrontation than compromise,” Della Volpe said. “Despite this, they seem as determined as ever to fight for the change they seek.” 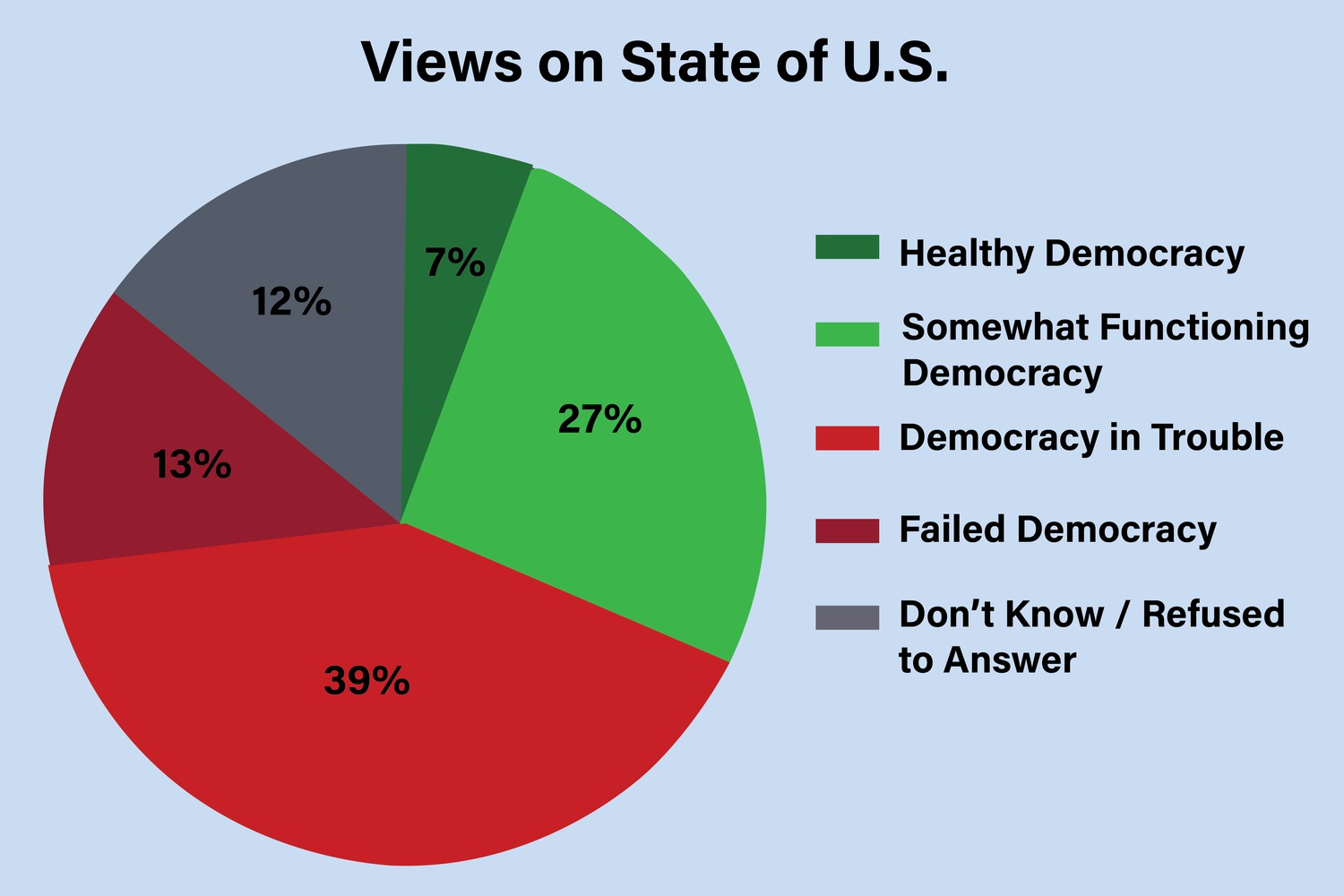 The spring poll found that 56 percent of young Americans were hopeful about the country’s future; that number has now dropped to 44 percent.

The poll released Wednesday also found that young Americans are pessimistic about the political divisions in the U.S.

Views on the impact of climate change, however, are split along partisan lines, with 60 percent of Democrats saying climate change has impacted their local community, while only 23 percent of Republicans agreed.

While most young Americans – 64 percent – believe that individual behavioral and lifestyle changes are “essential” or “somewhat important” to address climate change, respondents were divided on more ambitious proposals from elected officials.

Asked for their views on ideas “potentially costing up to $2 trillion” that “include overhauling the U.S. infrastructure, upgrading existing buildings and transport, and heavily investing in clean energy,” 23 percent of respondents said the proposals represent the “kind of bold action” needed, while the same proportion said the U.S. should be “more cautious” so as to not impact economic growth despite potential upsides to the measures.

Nineteen percent of respondents said “more drastic action” is needed, while 13 percent said the proposals were “too radical” to be considered.

Additionally, a majority of young Americans plan on voting in the midterm Congressional elections next November, with 56 percent of respondents saying they “definitely” or “probably” will vote.

Consistent with the IOP’s findings last spring, a majority of young Americans face mental health challenges, with 51 percent of respondents reporting symptoms of depression for “at least several days” over the course of the previous two weeks. Twenty-five percent of respondents also experienced thoughts of self-harm over the same time period.

Jing-Jing Shen ’23, student chair of HPOP, said in the press release that the polling results reflect the concerns of young Americans as they confront a wide variety of issues, but also demonstrate their motivation to solve those problems.

“Young people have come to even more deeply value their communities and connections with others, not only in contending with these crises but also in striving for a meaningful life,” Shen said.

Though the poll revealed disagreement on a myriad of issues, Shen said in a press call Wednesday that the results also highlight young Americans’ willingness to engage with individuals of differing backgrounds and perspectives.

“That really speaks volumes to the kind of collective power we hold in creating change together, even with such a diverse society,” Shen said.