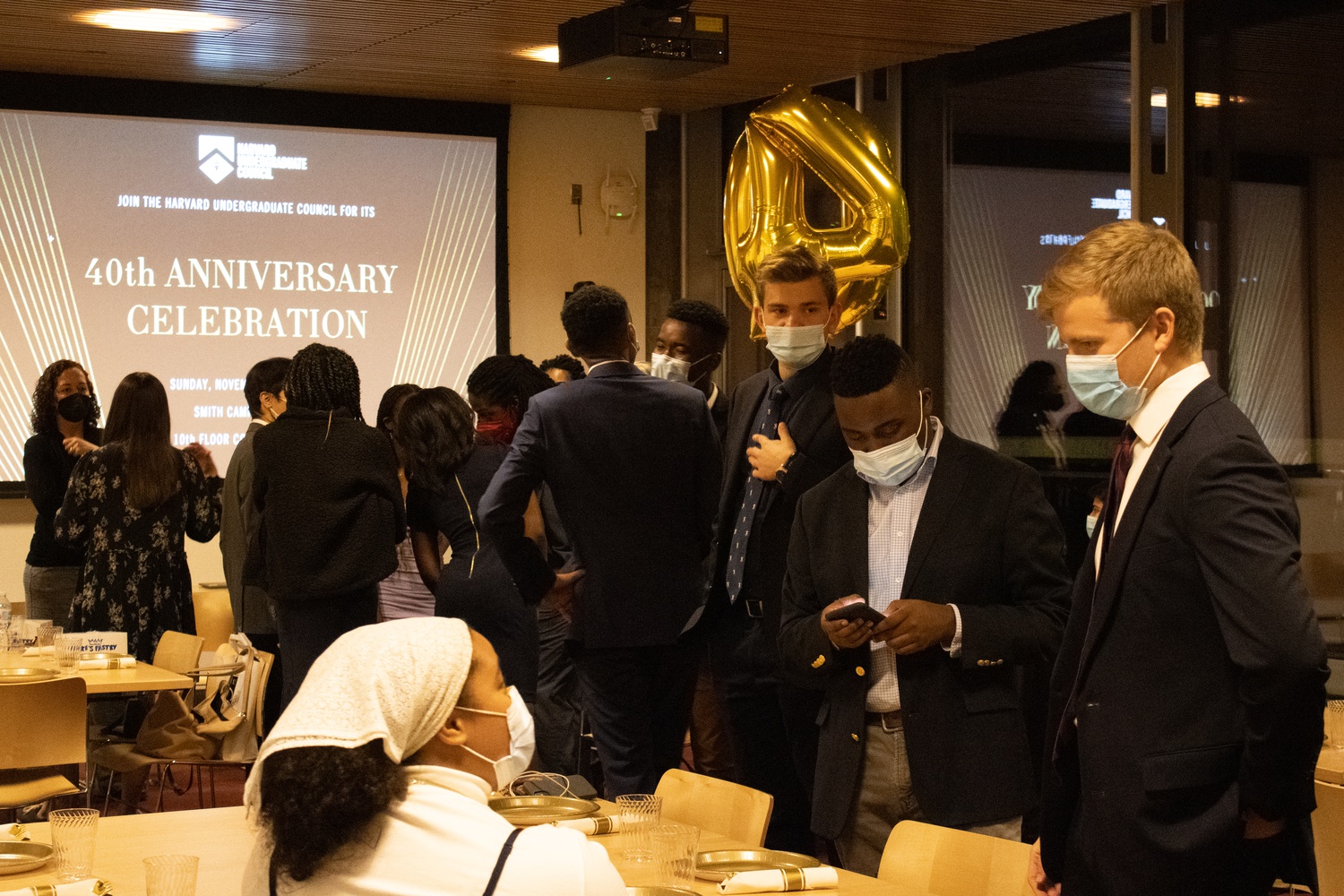 Attendees at Sunday's 40th anniversary celebration of the Undergraduate Council socialize on the 10th floor of the Smith Campus Center. By Pei Chao Zhuo
By Mert Geyiktepe and Rahem D. Hamid, Contributing Writers

The Harvard Undergraduate Council celebrated its 40th anniversary with a banquet in the Smith Campus Center Sunday evening.

In her keynote speech, Driskell told attendees her experience on the Council left her with many lasting life lessons.

“Understanding my truth and defying expectations have been two of the greatest keys to whatever model of success that I’ve had in life,” she said. “I came to better understand both of those concepts and how to deploy them effectively through my time on the Undergraduate Council.”

Driskell said throughout her career she has learned the importance of recognizing that everyone faces self-doubt.

“Maybe some of you have dealt with this feeling in your lives or maybe not, but imposter syndrome is that nagging unease that rises up when you feel like you don’t quite belong — that you’re not quite prepared enough,” she said. “I can tell you that everybody deals with imposter syndrome at some point. It’s a universal phenomenon that most of us will feel whether you're rich or poor, pauper or princess, and it’s okay.”

“Recognize that you’re not alone – it’s just that most people never talk about it,” she added.

Panelists discussed the significance of the Council in shaping their lives both during and after college.

Greenlaw, who served as finance committee chair, said the Council was his “favorite thing to do.”

Banks, who was vice president of the Council from 2016 to 2017, said close interpersonal relationships within the Council, particularly between the president and vice president, are crucial to its functioning. He said he and former Council president Shaiba Rather ’17 were “best friends.”

“The UC could be brought to its knees by an ineffective administration, specifically the president and the vice president,” he said. “At one point in my administration, an administrator said to me and Shaiba, ‘It’s like you two are married.’”

“We weren’t married,” he added. “We were in unison at all times.”

Coffey, a former chair of the Campus Life Committee, said his experience on the Council taught him that enacting change requires patience.

“Any kind of large bureaucracy, any kind of institution, it’s not going to change overnight,” he said. “You’ve got to be patient. You’ve got to keep trying, you’ve got to come up with different ideas.”

Singh, a former chair of the Academic Life Committee, said the Council sometimes focused on “nitty gritty” legislation instead of issues that more directly impacted students.

“Sometimes we would have really important legislation,” he said. “But instead of spending time talking about those issues and arguing over the merits of that statement and what the content was, we would spend two hours talking about a really nitty gritty amendment to the Constitution that litigated what issues and what bills we should talk about first or talk about last — things that didn’t matter to the student body.”

Jack M. Swanson ’22, a Council member who attended the event, said he enjoyed hearing the perspectives of the alumni panelists.

“I think it’s pretty rare that we get to hear from people who’ve served in the past and hear their experiences,” he said. “It’s great to see them all in one room.”