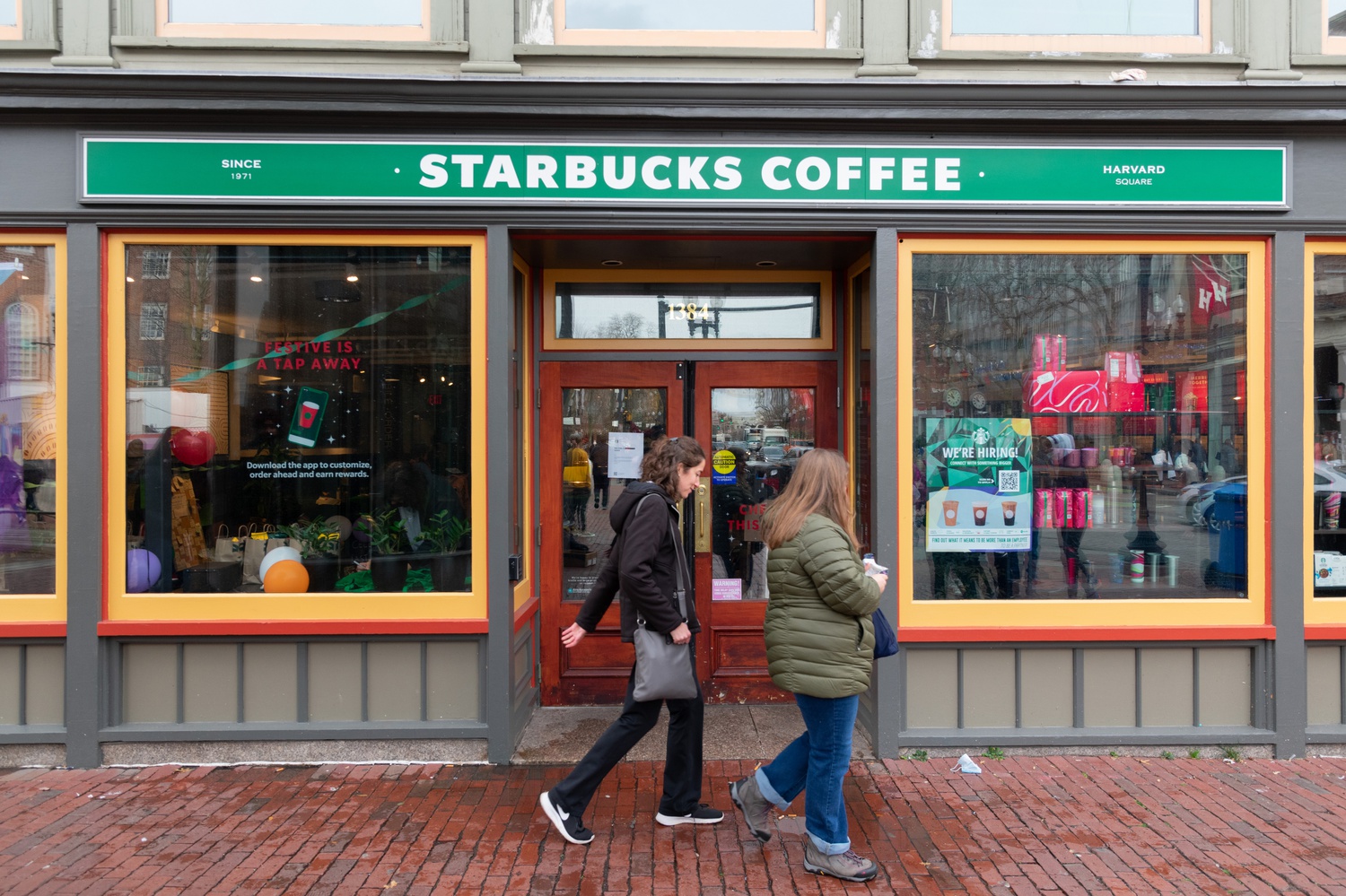 A longtime staple of Harvard Square, Starbucks closed Sunday. The Harvard Shop, which is affiliated with Harvard Student Agencies, will move into the space in 2022. By Julian J. Giordano
By Tracy Jiang and Davin W. Shi, Crimson Staff Writers

Ten years after debuting in Harvard Square, the Starbucks located at 1380 Massachusetts Avenue closed on Sunday, with the Harvard Shop set to take its place in 2022.

The closure is the third Starbucks location to leave the Square in recent years. For students who still need to satisfy their Starbucks cravings, the Starbucks store closest to the Square is located at 468 Broadway, near the Harvard Art Museums.

A few days before the Starbucks location officially closed, a sign displayed outside of the shop read, “come CELEBRATE our LAST WEEK with us!” The store also gave out free drinks and food – while supplies lasted – on its final day.

A spokesperson for Starbucks wrote in an email that “after careful consideration,” the store decided to shut down its operations at 1380 Mass. Ave.

“As part of Starbucks standard course of business, we continually evaluate our business to ensure a healthy store portfolio,” the spokesperson, who identified herself only as Allison, wrote.

“As difficult as this was, we must make the right business decisions for the sake of Starbucks’ long-term growth,” she added. “All Starbucks partners (employees) working at that store will have the opportunity to transfer to one of our nearby locations.”

The Harvard Shop, which is affiliated with Harvard Student Agencies, will move into the space previously occupied by Starbucks in the spring of 2022.

Harvard Student Agencies President George C. Guarnieri ’22 and President-Elect Alexander J. Kim ’23 wrote in an email that a Harvard Shop location will be relocating from the Garage, which will be undergoing renovations beginning in June 2022.

Many students mourned the loss of the last Starbucks location in the Square.

Anna G. Farronay ’24 said she used to frequent the Starbucks store “every day.”

“It was part of my morning routine,” she said. “I’m very sad it’s not anymore.”

Farronay said that initially, she did not believe the news about Starbucks closing.

“Starbucks can’t possibly close because it makes so much money. Literally, I am one person that goes there every day or maybe twice a day sometimes, and I’m sure there are other people exactly like me,” she said. “Starbucks makes bank. It’s always packed, it’s always super busy. I don’t understand why they would close.”

Farronay added that she was “legitimately really upset” on Monday morning when she realized that Starbucks had officially closed.

Christy Zheng ’25 said the Starbucks closing would “limit” the options available to students to get coffee in the Square.

“I’m not sure what they [will] open there, but I hope that it is something that Harvard students can still be interested in,” she said. “I do think this is a negative thing overall, but hopefully the new business will also be very helpful.”

Alexandria T. Q. Ho ’24, an inactive Crimson FlyBy editor, said that when she was making her college decision, she took the proximity of a Starbucks location to campus into consideration.

“When I was comparing my college options, not that the fact that we have a Starbucks store near Harvard Yard was an actual part in my decision, but I definitely took it into account,” she said.

“The fact that there was a Starbucks – I have a Starbucks addiction, just to clarify – the fact that we had a Starbucks in Harvard Yard made me so happy, and now that we don’t have it anymore, I feel even worse,” Ho added.