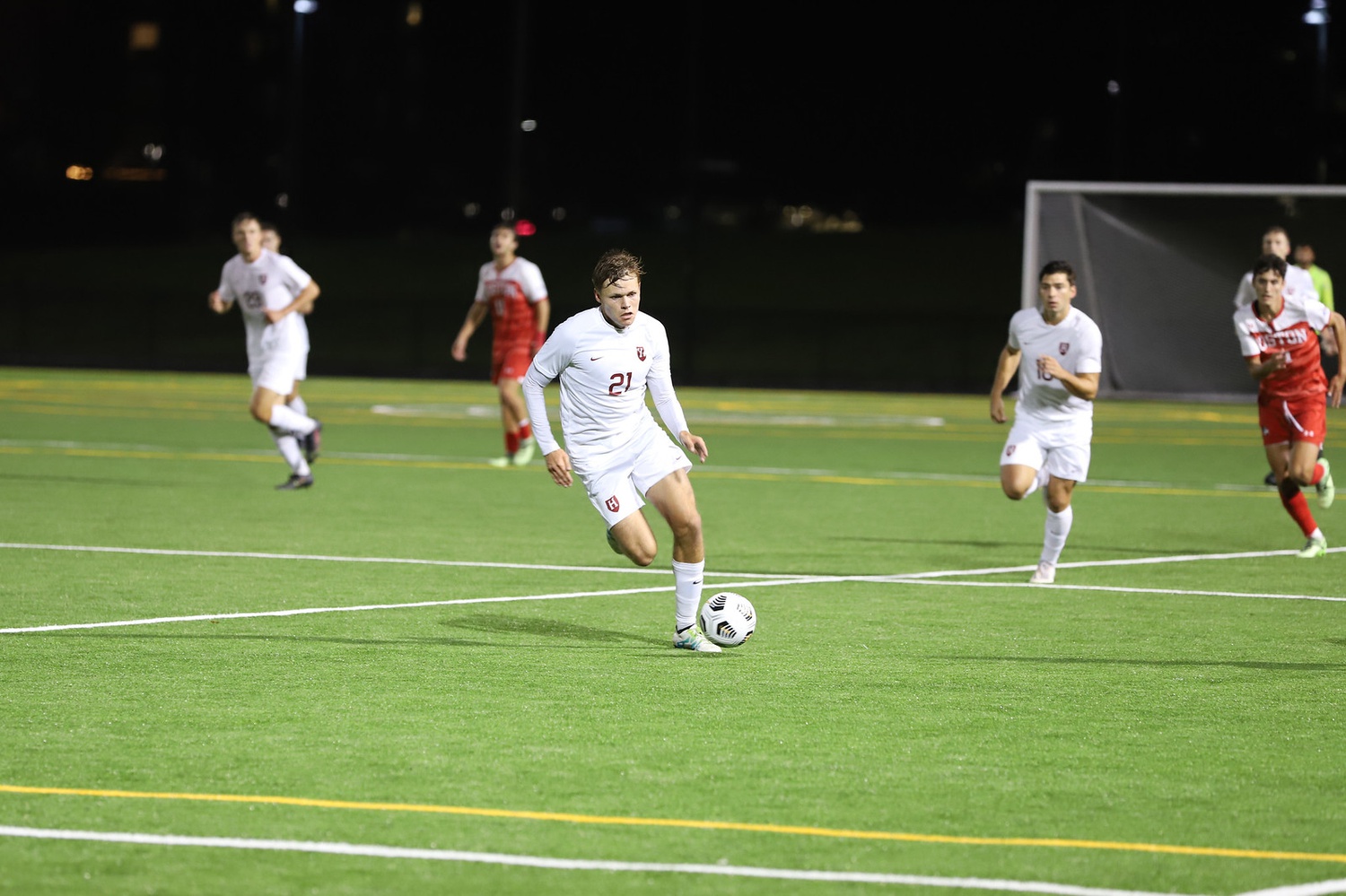 Sophomore midfielder Willem Ebbinge advances the ball up the field in a match against Boston earlier this season. Ebbinge picked up two assists in Tuesday's game against Holy Cross, bringing his team-leading assist total to eight on the season. By Owen A. Berger
By Eamon J. McLoughlin, Crimson Staff Writer

Harvard handed Holy Cross its first home loss of the season on Tuesday night, after senior midfielder Cornelius Bencsik scored a peach of a late winner to settle a back and forth affair at 3-2.

Harvard (5-4-3, 0-1-2 Ivy) was victorious in its last non-conference matchup of the season, outlasting Holy Cross (8-4-2, 5-1-0 Patriot) in an entertaining game in Worcester. The Crimson struck first and last in the matchup, with the Crusaders tying the game in both the first and second half before Harvard won the game with an outrageous first-time volley in the 88th minute.

“I was actually thinking a lot while the ball was in the air. It's one of those moments in soccer, where you almost have too much time, and you overthink. I was thinking about bringing the ball down, and whether to use my chest or my feet, but luckily for me, my instincts took over as I saw the goalie off his line,” Bencsik said of the game winner. “It was really wonderful to score that goal. A nice last minute goal to win the game is always an excellent feeling.”

It was a night which featured multiple standout performances for the Crimson, as Bencsik and sophomore midfielder James Fahmy both tallied a goal and an assist each, while junior forward Martin Vician scored for the fourth straight game. Sophomore midfielder Willem Ebbinge also tallied a pair of assists, his fifth and sixth assists in his last four games, which brings him to a team-best eight on the season.

Harvard settled quickly into the game, dominating the opening quarter of an hour, and it was rewarded with an early goal. Vician got on the end of a low cross from Bencsik in the eleventh minute, after the Brumunddal, Norway native found space down the right wing. The goal was Vician’s fourth in his last four games and his fifth on the season.

Holy Cross began to come to life following the Crimson’s goal, dominating possession after the first fifteen minutes of the game. Despite not creating many clear cut chances with this possession, the Crusaders tallied eight shots in the first half to Harvard’s two, and eventually found the back of the net in the 24th minute. Holy Cross converted a corner after whipping in a dangerous ball to the front post, which was headed home for 1-1.

The Crimson roared back to life after the break, settling into the game and scoring its second goal of the night in the 53rd minute. Ebbinge found some space down the line and picked out first-year forward Alessandro Arlotti in the box, who brilliantly faked a shot and ran over the ball, leaving the pass for a now-wide open Fahmy just inside the box. Fahmy made no mistake, curling the ball into the bottom corner for his first collegiate goal, which restored Harvard’s lead at 2-1.

The Crusaders hit back just a few minutes later against the run of play, following an unfortunate turnover near midfield by the Crimson, after Fahmy was hit in the back by a long pass out of Harvard’s defense. Holy Cross capitalized on the counter attacking chance, finding space on the right side of the box and firing home to tie the game at two.

As the game progressed into the final ten minutes, neither team could find a breakthrough, and it looked as if the Crimson would be playing its sixth overtime slate in twelve games. This changed in the 88th minute, when Fahmy launched a perfect ball from the middle of the Holy Cross half, which found Bencsik in space just inside the box. Bencsik volleyed the ball out of the air with his first touch, looping the ball over the goalie and into the far corner of the net to seal victory in a hard fought match.

“It was a huge relief. We have been heading to overtime a lot in recent weeks so it was great to get the job done in 90 minutes away from home,” Ebbinge said of the late goal. “We have set our sights on winning the last four games and are buzzing to play the majority of them on Jordan in front of a home crowd.”

Harvard will next host Princeton this Saturday at 4 p.m. on Jordan Field as it heads into its last four games, all of which come against Ivy League opposition.