These four couples in the Class of 2019 are tying the knot.
By Marella A. Gayla and Leah S. Yared 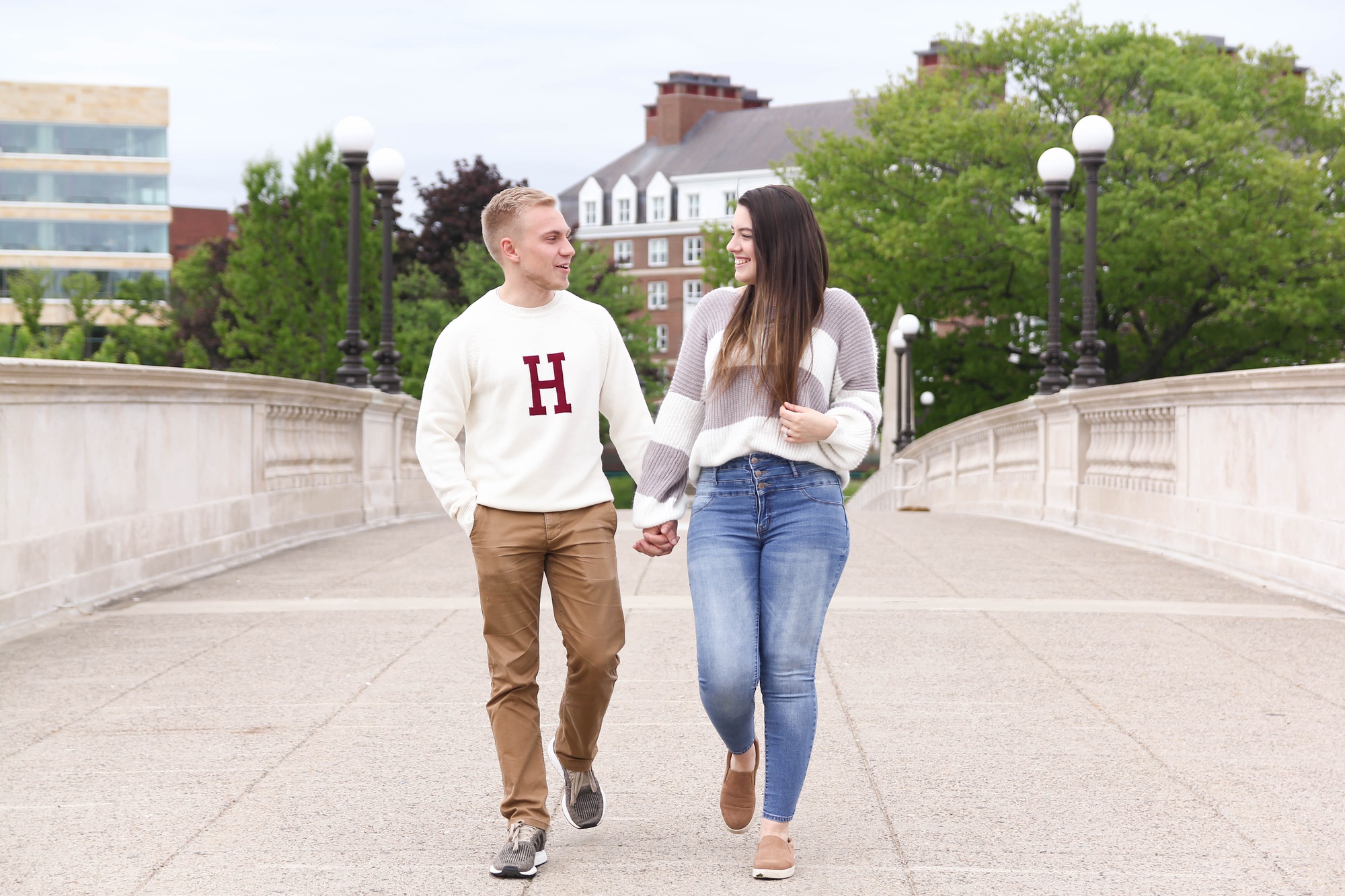 Charlotte Partow ’19 and Michael B. Broukhim ’07

Charlotte Partow ’19 says she would not have met her fiance without the help of her Harvard friends.

During the summer of 2017, Partow was working for the mother of a classmate at the Los Angeles District Attorney’s Office. She had created an account on The League — an exclusive dating app for career-oriented singles — at the urging of Janet J. Ho ’19, who was an intern at the company. Among all the pedigreed professionals on The League, Partow found Michael B. Broukhim ’07, a co-founder and co-CEO of the subscription service FabFitFun. Partow says she was drawn to Broukhim’s profile because his background seemed similar to her own — he, too is Harvard-educated and has Persian Jewish heritage.

Partow said she “rarely hit it off with people” before she met Broukhim. She remembered thinking, “even if we don’t hit it off romantically, maybe he’s someone interesting to know.”

“I also noticed the Harvard connection, and it goes without saying that she’s very beautiful,” Broukhim said. “Why not go out and get to know someone?”

After the two met for drinks at Soho House in West Hollywood, Partow phoned her mother and said, “I’m almost certain I met my husband.”

The only problem was that Partow, who is from New York City, had just five days left in Los Angeles. “My Airbnb was up,” she recalled.

Luckily, another Harvard friend, Chirine Mouharam ’19, came to the rescue. Mouharam introduced Partow to two friends from Lebanon who were studying at the University of California, Los Angeles and had an extra bedroom in their apartment. Partow extended her stay in Los Angeles by three weeks.

When Partow left California at the end of the summer, the couple embarked on a long-distance romance marked by frequent cross-country visits. Partow said she flew to Los Angeles to see Broukhim “at least every other week,” and Broukhim, a former Crimson Editorial Chair, traveled back to Harvard “around twice a semester.”

“The second he arrived, the first thing he wanted to do was go to Noch’s,” a popular Harvard pizza parlor, Partow said.

Partow and Broukhim’s adventures together so far include a “beautiful trip to Hawaii” and a visit to Europe marking the launch of FabFitFun in the United Kingdom. In April 2019, Broukhim proposed in Malibu, where many of their early dates took place.

“We had a picnic on the beach and he said, ‘I have a present,’” Partow said. “I was not expecting it at all that day.”

That was not the only surprise in store. Partow’s relatives had flown to Los Angeles for the engagement, and the two families held a celebration.

“All of our family was there,” Partow said. “My parents love Mikey so much.”

The two plan to live together in Los Angeles after Partow graduates from Harvard. Broukhim said his fiancee is “one of the most brilliant people [he has] ever known.” Partow said, “He’s opened my world up in so many ways.” 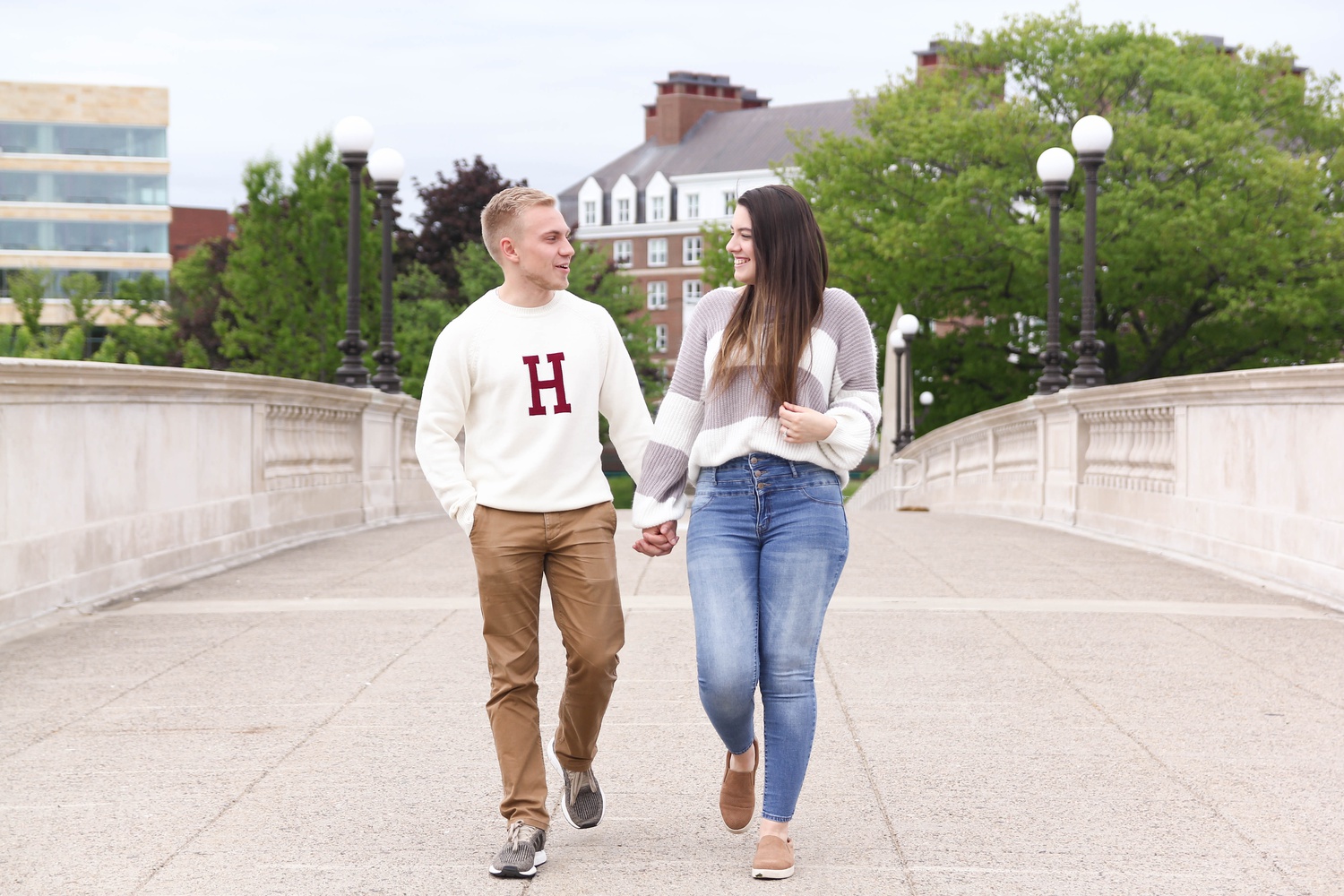 When Krystian W. Jurkowski ’19 went on vacation with Monica R. Kelly, his girlfriend of six years, he could not stop rummaging through his suitcase.

The two were spending spring break in Italy and France, and Kelly said that Jurkowski claimed to be “looking for his watch.” Jurkowski was, in fact, checking on the engagement ring he had hidden in a shoe.

“It was kind of nerve-wracking,” Jurkowski said. He surprised Kelly with a serenade and proposal in Paris. Accompanied by a violinist, the two danced in the rain to a song they discovered— and grew to love — when they first started dating: Steve Moakler’s “The Thing About Us.” Jurkowski also played a song on the guitar.

Kelly said she had a feeling that Jurkowski would propose during the trip, but that she was nonetheless “surprised by all the little details.” Jurkowski said he started planning his elaborate proposal “more than a year in advance.”

Jurkowski and Kelly are high school sweethearts, though they did not attend the same high school. Jurkowski is from Chicopee and Kelly is from the nearby town of Springfield. They met in a youth group at the Basilica of St. Stanislaus in Chicopee, Mass.

“We were really good friends for a year, and then it all fell into place,” Kelly said.

After high school, Kelly completed a degree in diagnostic medical imaging at a local college and Jurkowski studied computer science and psychology at Harvard. “We knew we would have a little bit of a long distance thing going, but we were up for the challenge,” Jurkowski said. “We knew that everything would be all good.”

Despite the distance, Kelly said she and Jurkowski have managed to see one another almost every weekend. The two of them have made many friends through the Catholic Student Association and the Harvard Boxing Club. “I’ve been involved in a lot of stuff at Harvard and that’s been really nice,” she said.

After graduation, Jurkowski will work as a software engineer at Fidelity Investments in the Boston area, and Kelly will pursue a career in the medical field. They plan to get married in July 2020, and Jurkowski said they anticipate a “decent-sized” wedding since he comes from a “big Polish family.”

“We have a huge community through boxing and social clubs that we’re definitely going to invite,” he said. 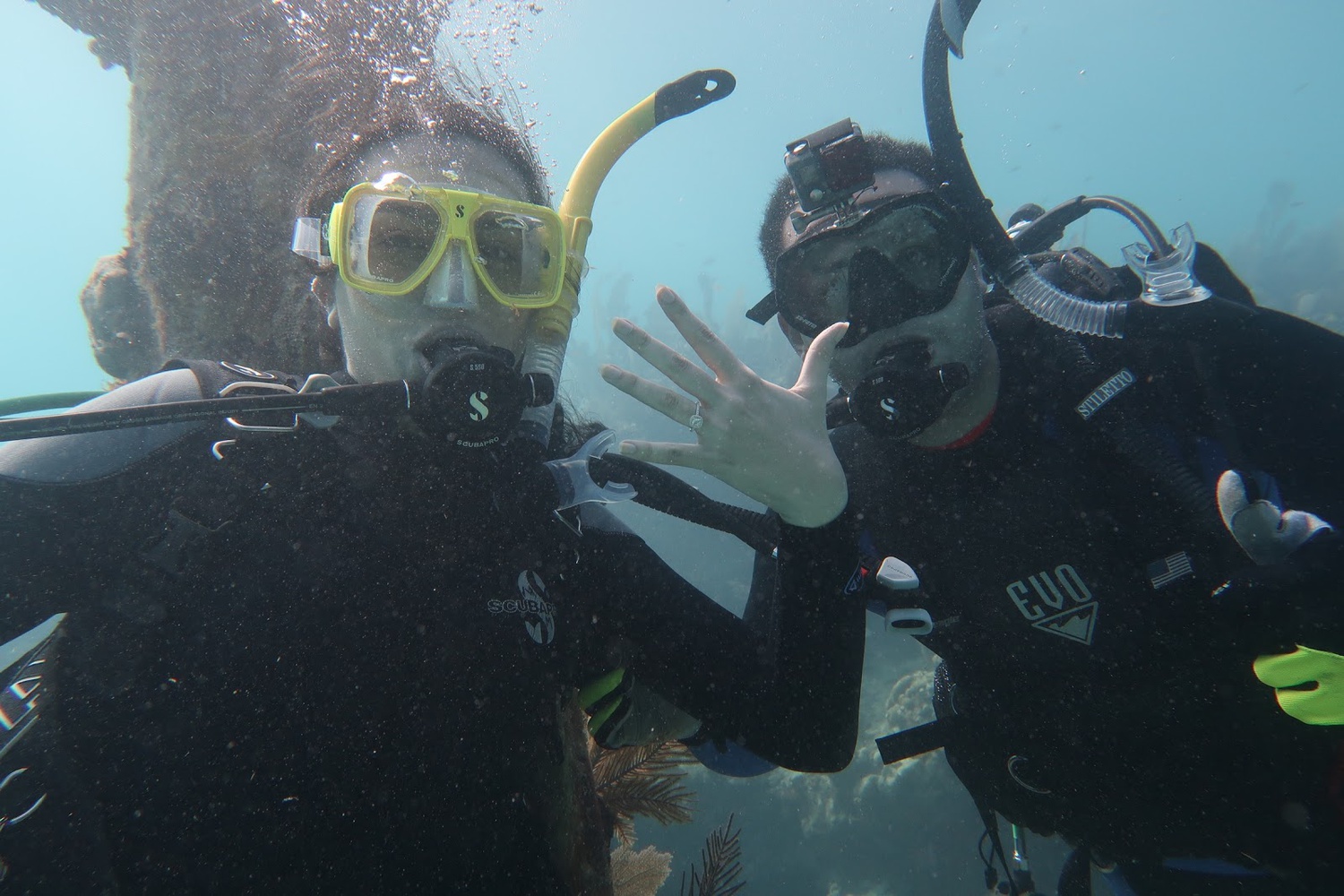 When Bryan Calvo-Herrera ’19 proposed to his high school sweetheart earlier this year, he did it in an unusual location: underwater. Calvo-Herrera and his then-girlfriend Karina Nogueras share a passion for scuba diving, so he took her to the first spot they ever dove together and unraveled a sign in front of her.

“I definitely wanted it to be a surprise. Nobody really knew exactly what I was planning,” said Calvo-Herrera, a Government concentrator who lives in Cabot House.

Calvo-Herrera and Nogueras met as middle schoolers in Miami, Fl., though the two did not really know each other at the time. They did not start seriously dating until sophomore year of high school. On their first outing as a couple — which Calvo-Herrera remembers as a “pretty standard first date”— they saw Expendables 2 at a movie theater.

“I liked her because she’s a very smart girl, very dedicated, and that intrigued me,” Calvo-Herrera said. “And I found out more about her — that she was funny and cute and all those gushy things.”

Going off to college tested the relationship. Calvo-Herrera headed to Harvard and Nogueras was off to the University of Central Florida. “When we were graduating high school, the big question was should we do long distance or not,” Calvo-Herrera said.

Despite the daunting distance between Miami and Cambridge (approximately 1,499 miles), Nogueras and Calvo-Herrera managed to make it work. They have now been dating for close to seven years, he says, and are planning to hold a nautical-themed December wedding on the water in Miami. (Noguera was unavailable for an interview.)

Nautical activities like scuba diving are one of the first hobbies that the couple grew passionate about together, and one of the main reasons why the pair plans to live in Florida after graduation.

“It’s something that I think is a fun hobby that we both enjoy,” Calvo-Herrera said. “It’s almost like a lifestyle.” Since scuba diving was one of the first things the couple did together, the underwater proposal, Calvo-Herrera said, marked a nice way to bring things “full circle.” 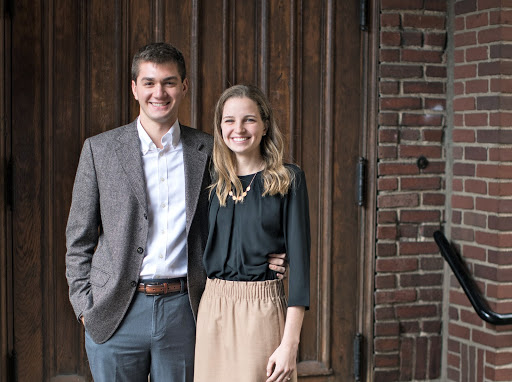 Last year, only a small percentage of graduating Harvard seniors said they planned to move to the Midwest. This year, Meredith A. Jones ’19 and Victor A. Mezacapa ’18 will fight that narrative. After the two marry in late June, they plan to move into a home located in a suburb of Cleveland, Ohio.

“I bet they don’t even have a statistic for people who aren’t originally from the Midwest who end up going there, like Meredith,” said Mezacapa, a Cleveland, Ohio native. Jones hails from Atlanta, Ga.

The pair began dating when Jones was a sophomore and Mezacapa was a junior. But Jones remembers seeing Mezacapa for the first time a bit earlier — she spotted him from afar at a Harvard-Radcliffe Orchestra concert she attended as a high school senior during a visit to Cambridge for her brother’s Junior Parents Weekend.

Once she got to campus, the duo’s friendship seemed to grow naturally; and now, the memories blur together, indistinguishable. “I don’t remember meeting him for the first time,” Jones said with a laugh.

The pair grew close as concentrators in the same track in the Classics Department (Classical Languages and Literatures) and spent time together in the Herbert Weir Smyth Classical Library on the third floor of Widener. Mezacapa said he will always remember these shared moments in the library.

“That clued me into how smart she was and how she had the same sense of humor,” Mezacapa said.

Mezacapa proposed to Jones in August, just before she headed back to campus to begin her senior year and before he went to work out of McKinsey and Company’s Cleveland office. Though the couple had discussed getting engaged, Jones did not know when Mezacapa planned to pop the question. She hoped it would happen while Mezacapa was traveling with her family on a vacation in New Jersey, the last time the two were to see each other before the start of the semester. But Mezacapa left without proposing.

To Jones’s surprise, Mezacapa returned, ring in hand. He remembers being nervous about the logistics — he had to retrieve the ring from a jeweler in Cleveland, keep it in a tiny bag stuffed in his pocket, and above all, make sure he did not lose it before he got to pop the question. Jones said the location of the proposal — a small beach town called Stone Harbor, N.J. — was meaningful to her because it has been the site of her family’s reunions for years.

Jones and Mezacapa are not the only ones in their circle of friends and family who will be getting married soon; Jones said the two will attend nine weddings this year.

“While this is kind of a unique thing to be doing, we’ve had the blessing of being surrounded by a number of people who are actually choosing the same path,” she said.