The Last Gymnasts of Hemenway

Why doesn't Harvard have a gymnastics team anymore? And what was it like to be a part of the team in its heyday?
By Eliel Ig-Izevbekhai 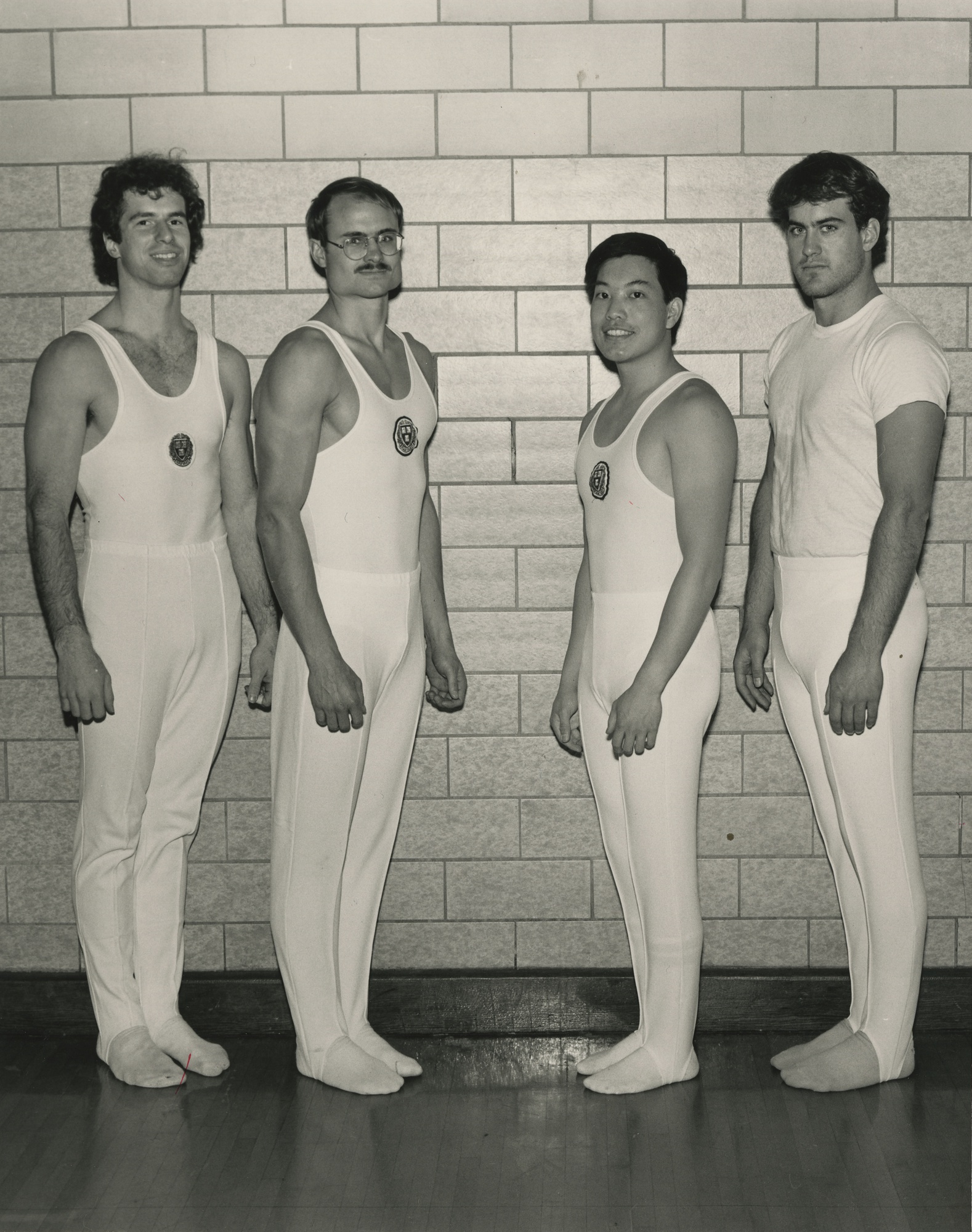 Harvard’s gymnastics hosted its first ever meet in 1980 against Northeastern, in which the men’s side swept the Huskies. Less than a decade later, the club faded into oblivion. By Courtesy of Harvard Athletic Communications

At the varsity level, Harvard sponsors over 40 Division I men’s and women’s sports, more than any other school in the country. These teams have combined for 146 national championships, 440 Ivy League titles and representation in every single Olympic Games.

Missing however from this eclectic mix of teams — ranging from skiing to women’s rugby — is one of the more popular sports in the world: gymnastics.

This, however, was not always the case.

Based on records from the Harvard Yearbook and Harvard Crimson, the last known written record of a small, self-sufficient club gymnastics team was in 1984. To understand the experiences of being a Harvard gymnast in those golden and final years of the eighties, we interviewed some of the last collegiate gymnastics performers to represent the Crimson.

The history of the program dates back to 1903, when the Harvard Gymnastics Club was conceived in the Trophy Room of the Hemenway Gymnasium by A. Tyng ‘04. The sport had been offered as an athletics class stretching back at least to 1896, with activities “consisting of prescribed calisthenics drills with wands, dumb bells, etc.; light work on the apparatus, jumping, burbling and running-in fact exercises for the general building up of the body.”

Flashing forward to 1968, the gymnastics program appeared to remain in good hands. The equipment in Hemenway Gymnasium had been replaced with a $2,500 investment, and former Olympic gymnast Joseph L. Massimo had joined as a coach/instructor. By 1972, the gymnastic class offered by the athletic department had 61 enrollees, and about 15 expressed interest in intercollegiate competition.

“The athletic department had classes you could take in various sports,” Todd Morrison ‘81 said. “There was a gymnastics one. We didn’t have a team or a club at that point [in 1977]. It turns out there were other people in the class that were interested. Sophomore year, 78-79,... the three of us, Ken [Mendez], Sarah Johnson, and I started the club. We went to the club office, said we could be the club officers, and that Harvard needs a gymnastics team. That meant we had access to financial needs, and the three of us went to Ivies that year.”

In the since-discontinued Ivy League Gymnastics Championships, the aforementioned Kenneth Mendez ‘82 finished as high as 11th out of 27 competitors in the floor exercise, tying fellow Crimson competitor Todd Morrison.

“I knew there was [no varsity program] at Harvard… that there might have been a club team but there was really no one to talk about it,” Mendez, who was a freshman during the club’s inception, said about his prospects for varsity college gymnastics as a high schooler.

We were practicing in Hemenway Gymnasium on the top floor,” Mendez added. “There was a small gym there with old equipment. It just was not safe up there. There wasn't enough equipment and we didn’t have a coach. What we ended up doing was going over to MIT and practicing during the season with their team.”

Less than two years since its inception, the Gymnastics Club held its first-ever meet in Northeastern’s Cabot Gym. The Crimson men defeated the Huskies in all of its events, while the Crimson group of five women performed solo(since no Northeastern women competed) in a public exhibition.

One of those women, Anne Harrington ‘81, noted the importance of various alumni in supporting the program despite limited opportunities for competition on the women’s side.

“We went to the Harvard Club of New York and did an exhibition program.” Harrington said. “We demonstrated our passion for the sport, and we then got some gift money to buy some equipment.”

She also noted the challenges of running a club sport, as a lack of a varsity designation meant no recruiting to continue the line of athletes and no paid coaches to oversee and commit to the program.

“There was no funding for coaching, it was volunteer work,” Harrington said. “When you look at a very organized club sport let varsity sport with a team, a schedule of training, and a coach, there are all sorts of support systems and systems that keep you accountable that we didn't have.”

Elsewhere in the Ancient Eight, support for gymnastics was growing, including on the women’s side. At a time when Ivy League institutions were just beginning to accept women, raw but promising gymnastics talent began to cultivate into polished teams. The first women’s gymnastics Ivy League Championships were held during the 1976-77 season.

“When women are admitted to an all-male school, it's hard to be a part of [athletics] right away and be accepted if tradition is being changed,” said Yale varsity women’s gymnastics coach Barbara Tonry.

Tonry has led the women’s side since its inception in 1973, joining forces with her husband and former Olympic gymnast Don Tonry, the coach of the men’s gymnastics team. By then, the men's team had already been well established, and had enjoyed incredible success. The women's team, on the other hand, was built from a small physical education class.

Tonry coached the team without pay initially, maintaining her job in teaching. Like many women's teams at that time, nearly everything was built from scratch by a passion for the sport. Tonry took a group of newly trained gymnasts at the school and started competing with some of the local teams, as well as Princeton. They enjoyed early success despite their relative inexperience, and by 1977, the Bulldogs had already built a blossoming program for the first Ivy League Championships.

“We had seven out of eight Ivies competing within a few years,” Tonry noted.

Yale took the first title against a full line of competition as the Ancient Eight began to build a thriving gymnastics program. Only Columbia did not send a competitor to the 1979 Ivy League championships. Some of the teams were fully varsity, while others — like Harvard — had club teams, not officially registered under the NCAA.

When teams were not fully supported by their school’s funds and infrastructure, the friendship and support from across the Ivy League stepped in. Surely, competition was an aspect of gymnastics, but the love of the game was the backbone.

“As you know there is a lot of friends between all of the Ivy Leagues, so a lot of the people who were at Harvard knew the people at Yale,” Tonry said. “Harvard came down on Sundays and we trained all together at Yale. It was all for the sport; it was not for anything other than that.”

Those early years of the 1980s was the peak of success for Ivy League gymnastics. In 1981, the Harvard team had a fair amount of competitors, was sending athletes to the Ivies, and even had local meets with teams like Boston University.

Still, both men’s and women’s teams at Harvard and in the Ivy League faced challenges, financially and logistically.

The Crimson team stayed around even after the graduation of its founding members with help from Morrison and other alumni, but before long, nobody was competing in the club program.

“Eventually, I don't know if it fell apart, other people took up the torch, or if it just expired.” Morrison said.

Similar challenges as far as enrollment and financial support plagued the once-promising foundation from the early-eighties, beginning with the dropping of Dartmouth women’s gymnastics and later Princeton. Men’s gymnastics lost its support at Yale, despite winning three consecutive Ancient Eight championships, and other programs followed soon after.

“The women continued,” Tonry said. “We had, at that time, the most successful team, men or women, at Yale. It was difficult to have a rationale for not having us continue.”

Despite other programs such as Yale and Penn later designating women’s gymnastics as a varsity sport, this consideration was not made in Cambridge. One factor during that period was the relative lack of space for athletics on campus.

“With limited resources, we decided that other things carried precedence,” stated Jack Reardon, Harvard Director of Athletics from 1978 to 1990. “If everybody in our league had strong teams, that would have affected our thinking. The Hemenway gym needed to accommodate other sports such as intramural basketball. We didn’t have enough floor space at the university.”

By 1990, there were no longer enough teams to be considered an Ivy League sport (varsity and non-varsity), since more than four teams are required to form a conference division. Only Cornell, Brown, Penn, and Yale preserved women’s gymnastics programs. The Brown varsity women’s gymnastics team lost funding from the university in 1991, but the school later reinstated the program a year later following a Title IX lawsuit.

In Cambridge, the 1991 Harvard Yearbook confirms the official closure of the Crimson gymnastics team, with no mentioning of the program in the club sports section.

Despite the what ifs in the story of Harvard Gymnastics, there was no regret for participating amongst those in the late seventies and early eighties.

“It's a life changing and influencing sport,” Mendez said. “It's a disappointment that Harvard never really made the commitment.”

Teammates echoed the same sentiment. Even after sustaining a devastating injury to end her gymnastics career, Harrington spoke very highly of her time on the team.

“There was a pride because we created the team from the ground up. We raised our own funds, coached ourselves. I was a never a superstar, but I was proud to be in competition. We made something happen, even if it was for a little while.”

Morrison was no less grateful for his time.

“I enjoyed it. A lot,” Morrison said. “Eventually I got to the point in my life where I didn’t have any working joints anymore, but I coached for a few years after that. I wouldn’t do it differently, it was an enormously good time.”

Though gymnastics is idle at Harvard, many associated with past programs would love to see Ancient Eight gymnastics return to its former glory and join the four current teams who compete at the varsity level.

“I would love to have Harvard gymnastics back,” Tonry said. “It would make it harder on us, but I would love to see all eight schools sponsor gymnastics again because it’s a fantastic and beautiful sport for both men and women.”