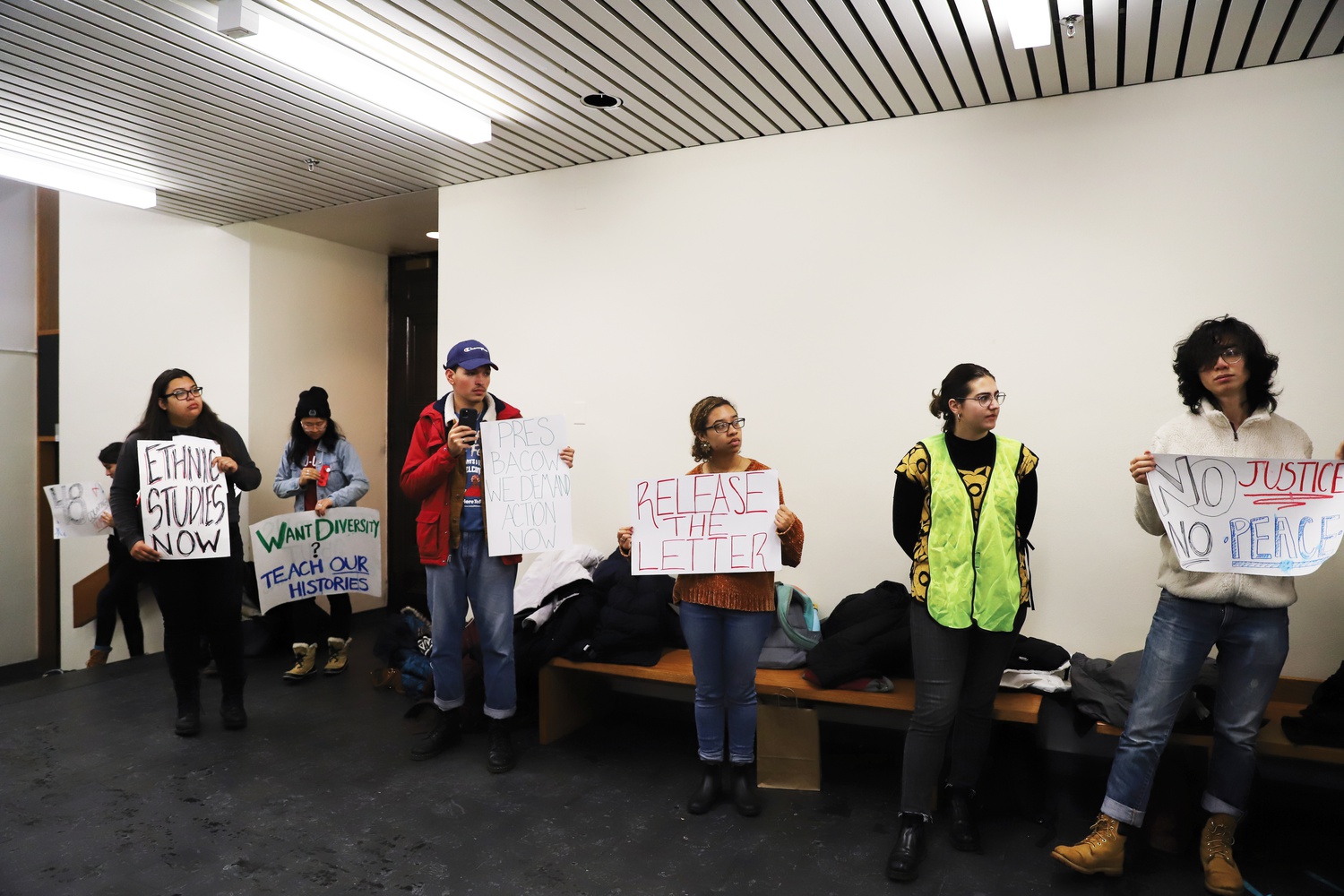 An individual protesting Harvard’s decision to deny tenure to Romance Languages and Literatures associate professor Lorgia García Peña stood silently inside the Faculty of Arts and Sciences meeting Tuesday while dozens of students demonstrated outside.

The protester held a sign which reiterated demands students first raised in a letter to administrators and a sit-in at University Hall yesterday. The sign called on Harvard to reverse García Peña’s tenure decision; publicly release correspondence about that decision between Bacow, Gay, and department chair Mariano Siskind; and open an investigation into García Peña’s case for “procedural errors, prejudice, and discrimination.”

The University informed García Peña — who specializes in Latinx studies — of the tenure decision Nov. 27. Since then, graduate and undergraduate students have organized against the verdict, penning letters to top Harvard administrators protesting the decision. More than 240 Harvard affiliates and 45 student organizations signed onto the first letter. The second letter, sent by a “coalition of graduate students and concerned scholars” from within and outside Harvard, has garnered more than 2,700 signatures.

The letters highlight García Peña’s accomplishments during her nearly seven-year tenure at the University, including helping establish an ethnic studies track in History and Literature, publishing a book on Dominican racial and national identity to critical acclaim, and receiving multiple awards from the University for her teaching.

García Peña did not respond to a request for comment on her tenure case.

The individual protesting inside of Tuesday’s meeting stood near the middle of the large lecture hall in Emerson Hall and immediately drew the ire of University President Lawrence S. Bacow, who chaired the meeting. Faculty meetings are closed to the public and most students.

Bacow asked the protester to move to the side of the room, saying that the sign was blocking the view of faculty members sitting at the back. He also asked the individual to provide their name, but the protester remained silent.

After the protester did not respond to his request, Bacow called the faculty to a vote, asking if he had their support to compel the protester to move. Multiple faculty members dissented, and the protester remained in place.

“I think this is a poor precedent for us as a faculty to have our meeting disrupted in this fashion,” Bacow said.

History professor Kirsten A. Weld asked Bacow to hold a discussion of the “substance” of the protester’s demands, but Bacow demurred, saying it was not “appropriate.” Later in the meeting, Weld told the protester she supports them and criticized the University’s tenure decision.

“I share your heartbreak and your outrage,” she said.

Standing outside the meeting, protesters linked the controversy over the tenure decision to broader calls for the University to establish a formalized ethnic studies program — a demand that has a more than four decade-long history. They conversed with faculty members entering the meeting and passed out flyers.

Multiple protesters declined to comment, including the one who disrupted the faculty meeting.

History of Science lecturer Soha Bayoumi said in an interview after the meeting that she supports the students’ demands for an ethnic studies program.

“This is a demand students have made for over 40 years now, to teach the different histories in an interdisciplinary program that will provide tools to understand the composition of this country, and the histories and communities that constitute this country,” Bayoumi said.

“And so, if we're really serious about diversity, I think it is important for us to also think about ethnic studies,” she added.

FAS Dean Claudine Gay has embarked on a nationwide search to hire three to four faculty members who specialize in Asian American, Muslim American, and Latinx studies. Gay said in a November interview that the search committee has compiled a long list of candidates and will invite some to campus to give public lectures and meet with faculty and students.

Since late 2018, at least three tenure-track professors who specialize in race and religion have left the University because they did not receive tenure or took a job elsewhere. In November 2018, the University declined to tenure Harvard Graduate School of Education associate professor Natasha K. Warikoo; History assistant professor Genevieve A. Clutario accepted a position at Wellesley College soon after; and the Divinity School denied tenure last spring to Science and Religion associate professor Ahmed Ragab.