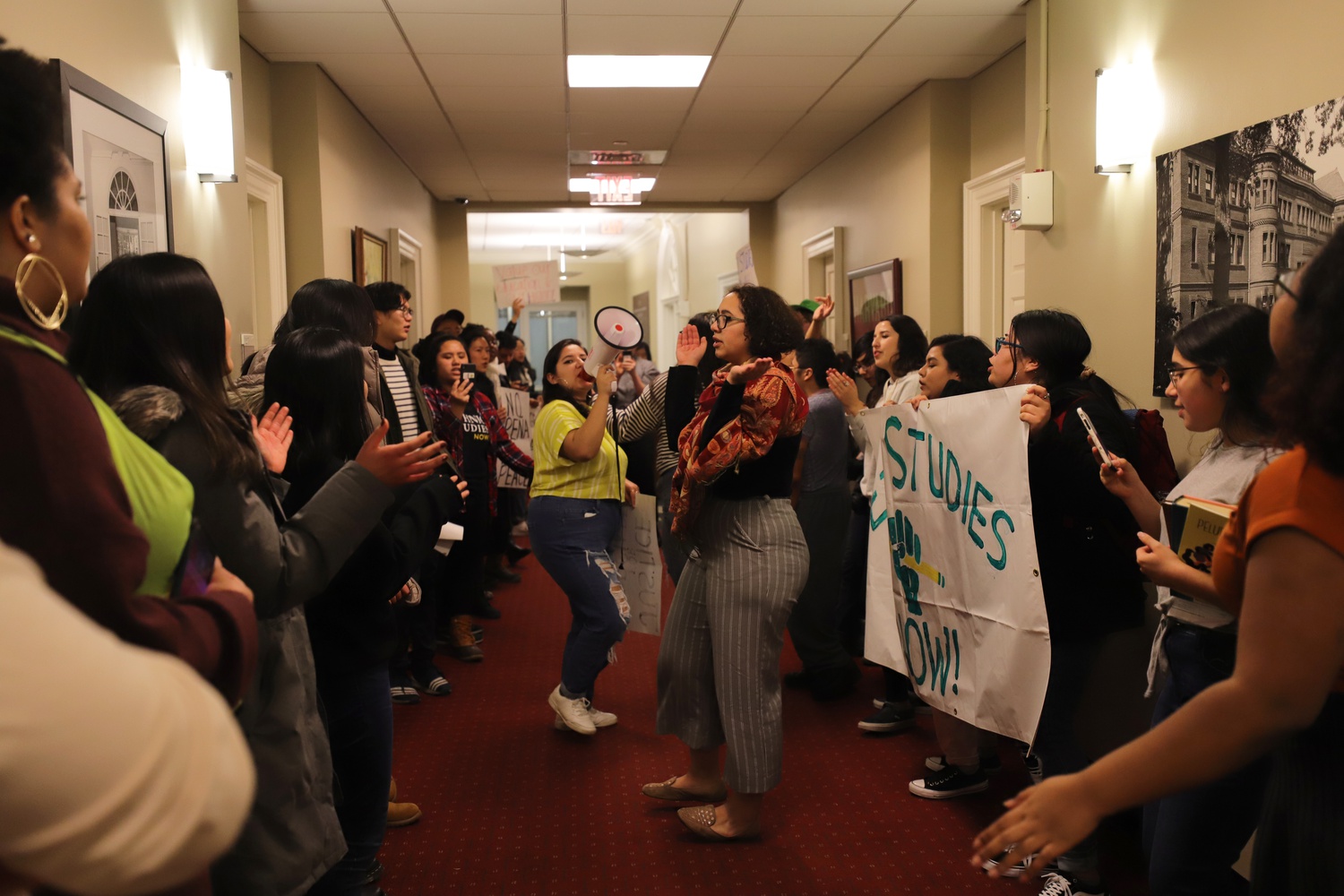 Roughly 50 Harvard students occupied Harvard’s Office of Admissions and Financial Aid Thursday to demand the University create an ethnic studies department, arguing that Harvard must extend its commitment to diversity beyond race-conscious admissions.

The protest coincided with the day that Harvard released early action admissions decisions. At 7 p.m., the Harvard Admissions Office informed 895 high school seniors of their acceptance into Harvard’s Class of 2024.

Throughout the sit-in, students wielded signs reading “After you admit us don’t forget us” and “Want diversity? Teach our histories!”

Speakers at the sit-in linked the fight for ethnic studies with the recent admissions lawsuit decision. In October, federal judge Allison D. Burroughs ruled against anti-affirmative action advocacy group Students for Fair Admissions and in Harvard’s favor, finding that the College’s race-conscious admissions policies do not unlawfully discriminate based on race.

Cecilia A. J. Nuñez ’20 and Catherine H. Ho ’21 — both of whom testified along with six other current and former Harvard undergraduates in the October 2018 admissions trial — spoke about their experiences in the aftermath of the trial during the sit-in.

Nuñez said in a speech at the sit-in that even though she testified on behalf of Harvard’s race-conscious admissions policies, she and other students of color still feel unwelcome on campus.

“Something that we've been telling them since day one is that while we do think that it is important that Harvard makes sure that its admissions practices welcome diverse students, that is by no means us saying that this place is a perfect place for diverse students,” she said.

In her speech, Ho criticized Harvard for simultaneously “tokenizing” students of color while denying them access to diverse curricula and faculty mentors.

“I am tired of Harvard using my story without giving me ethnic studies so I can fully understand what my story even means,” Ho said.

Asked for comment, Faculty of Arts and Sciences spokesperson Anna G. Cowenhoven referred to FAS Dean Claudine Gay’s recent email on ethnic studies. In the email, Gay promised an “institutional commitment” to building an ethnic studies program and reiterated her recent efforts, which include an ongoing cluster hire. 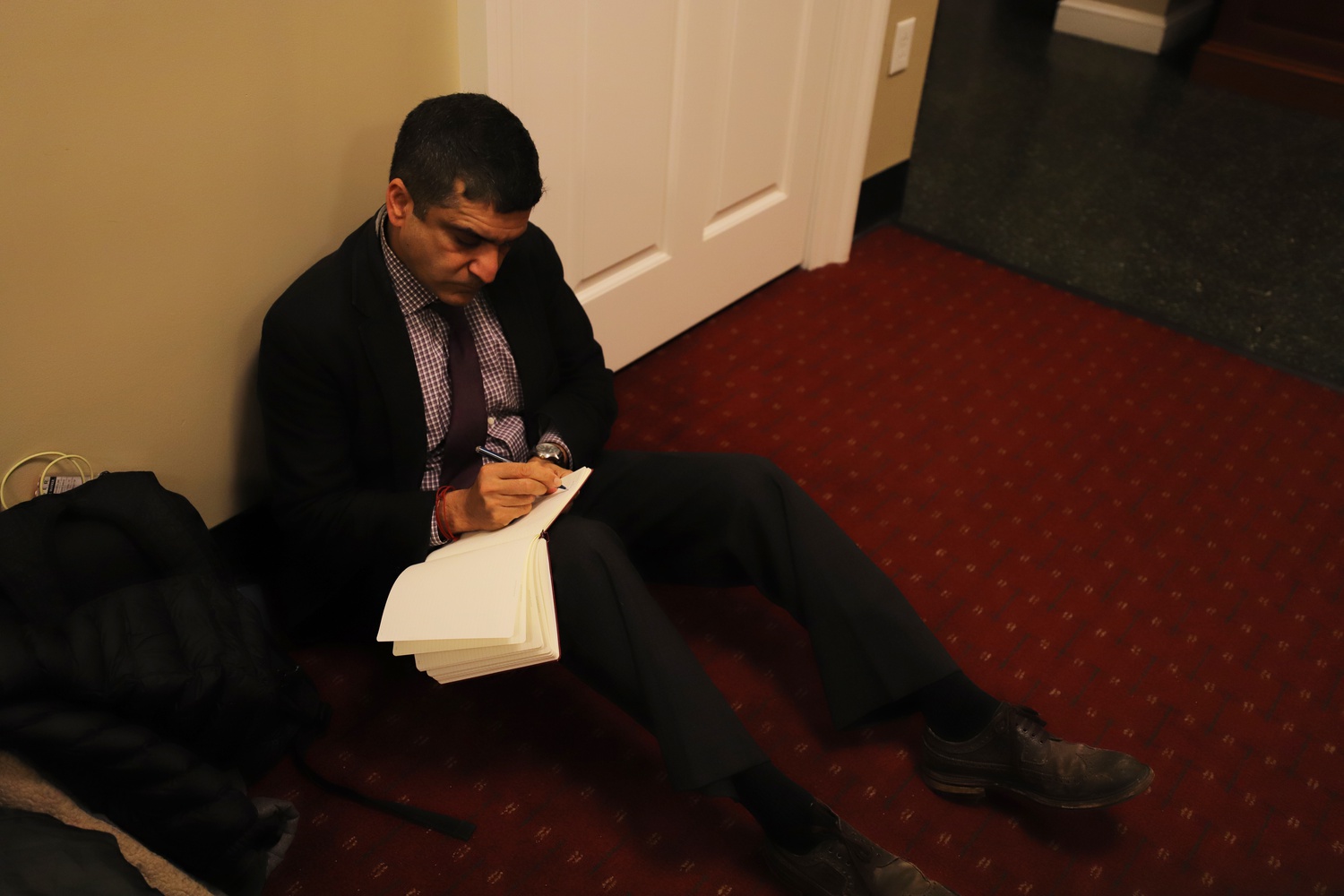 At one point during the protest, Dean of the College Rakesh Khurana arrived in the admissions office and sat down in the hallway, taking notes as he watched the students chant.

Khurana said in an interview after the protest that he attended the sit-in to listen to students’ concerns.

“Everybody on our campus deserves to be heard,” he said. “And I'm trying to understand what is important to them and see what we can do to continually strengthen dialogue and communication with the students.”

Students who work for the admissions office also spoke at the protest, calling on Harvard to reaffirm its commitment to diversity beyond admitting students of color by also creating a formalized ethnic studies program.

Maribel Nava ’20, who works for the Undergraduate Minority Recruitment Program, said at the sit-in that she signed onto an open letter addressed to Dean of Admissions and Financial Aid William R. Fitzsimmons ’67 today.

“We are asking Dean Fitzsimmons to be an ally, to really take this commitment to diversity and inclusion beyond simply the demographics of the student body,” Nava said. “We all know that it requires a diverse teaching and faculty staff and reflections of our identities in our curriculum.”

Maria J. Perez Franco ’20, a Harvard First Generation Program student coordinator, told protesters that she feels like she is “lying” to prospective students who ask about diversity on campus.

He also noted that the numbers of minority students who apply and are accepted to Harvard have “held up.”

“It is interesting, just given some of the issues on campus, that the minority number has held up very well,” he said. “That's encouraging.”

After the University informed García Peña of the tenure decision on Nov. 27, Harvard affiliates have protested the verdict by penning open letters, hosting rallies, interrupting a faculty meeting, and staging sit-ins at University Hall and the Office of the Provost.

García Peña did not respond to a request for comment.

After the sit-in, event organizers hosted a teach-in with graduate students to discuss the history of ethnic studies in the United States and share poems. Event organizers asked The Crimson to leave the teach-in — held in the admissions office — multiple times, citing attendees’ discomfort. Some students physically tried to block The Crimson from taking photographs and verbally harassed reporters.