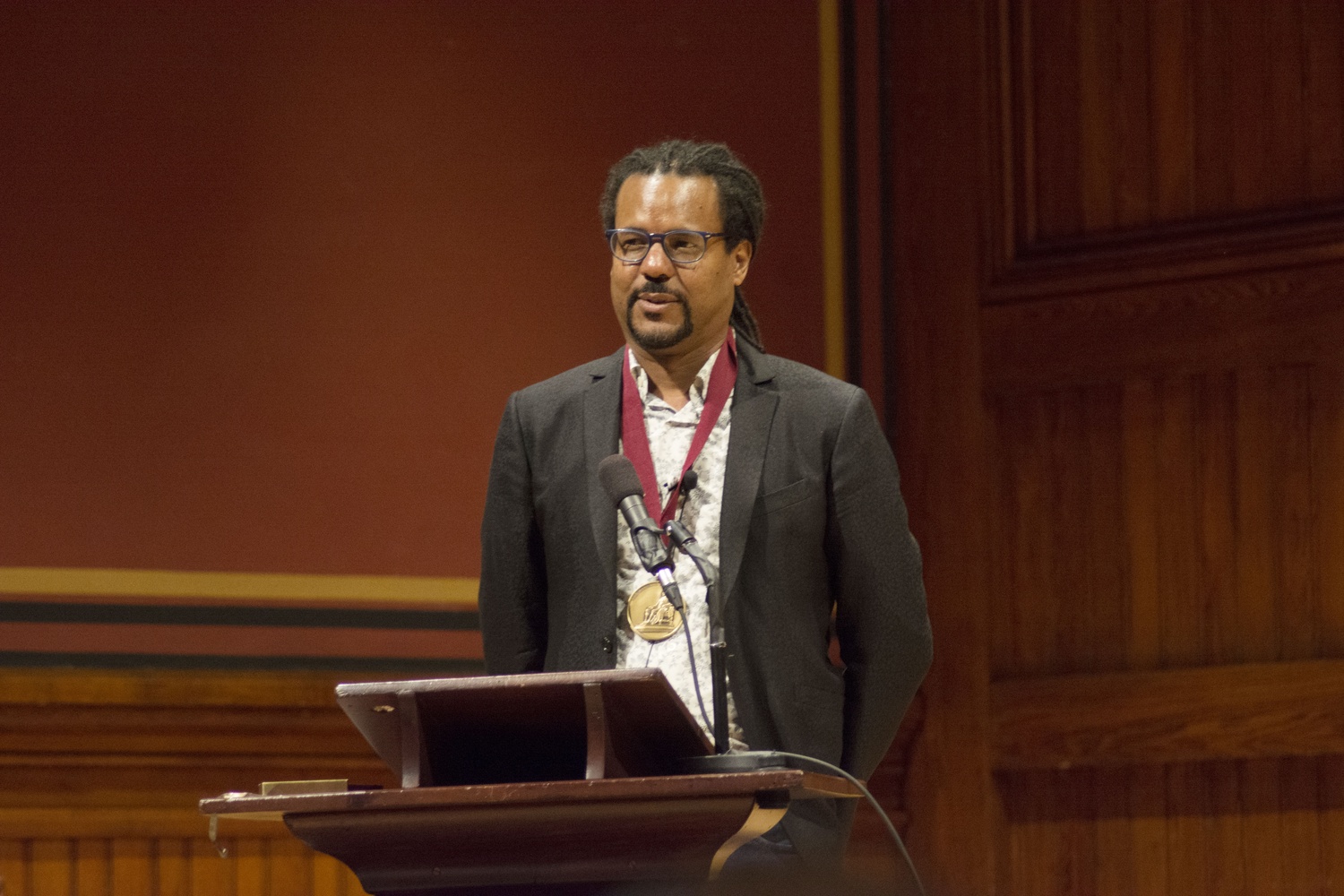 At the celebration, Faust described the medal—established in 1995—as “Harvard’s highest honor for artistic achievement by alumni.” Whitehead is the third novelist to win the award, following past recipients Margaret Atwood and John Updike ’54. As she presented the medal to Whitehead, Faust said the University is “grateful beyond words that your words are in our library."

Whitehead limited his acceptance speech to just a few sentences, explaining that, during his days as a Harvard student, he never would have expected such an honor.

“I accept this on behalf of the fourth floor of Pennypacker. May you all live in peace and harmony,” he said.

Whitehead’s novel “The Underground Railroad” won the Pulitzer Prize, the National Book Award, and was a #1 New York Times Bestseller. The novel is currently being adapted to an Amazon Studios television series written and directed by Barry Jenkins, the Oscar-winning writer-director of “Moonlight.”

In an hour-long interview with actor John Lithgow ’67—winner of last year’s Arts Medal—Whitehead discussed a range of topics including his writing career, his process as a writer, and the motivations for his work.

“Usually my books have too many black people to get picked up for live Hollywood,” Whitehead said with a chuckle.

Whitehead also spoke about his career transition—from working as a journalist early on to ultimately becoming a novelist.

“It was always about fiction,” he said, “When I was writing, one article would buy me four days of writing, that’s how I thought of it.”

Whitehead previously taught at Harvard as part of the “Black Writers Reading” series hosted by the W.E.B. DuBois institute in 2003.

The award ceremony marked the official start of this spring’s Arts First, an annual weekend festival on campus that showcases artworks and performances by University affiliates. Originally a festival limited to undergraduate art, the event has since expanded to include all University affiliates—including faculty and staff—as well as guest artists.

Randow said this is the first year that Arts First—which will run from Thursday to Sunday—will hold events across the river in Allston. Among these events and exhibitions, the Office for Arts is sponsoring a performance of Antigone at the Harvard Stadium Sunday evening.

Randow said the Office for the Arts also seeks to encourage independent student artists, in addition to organized groups, to bring their work to the festival.