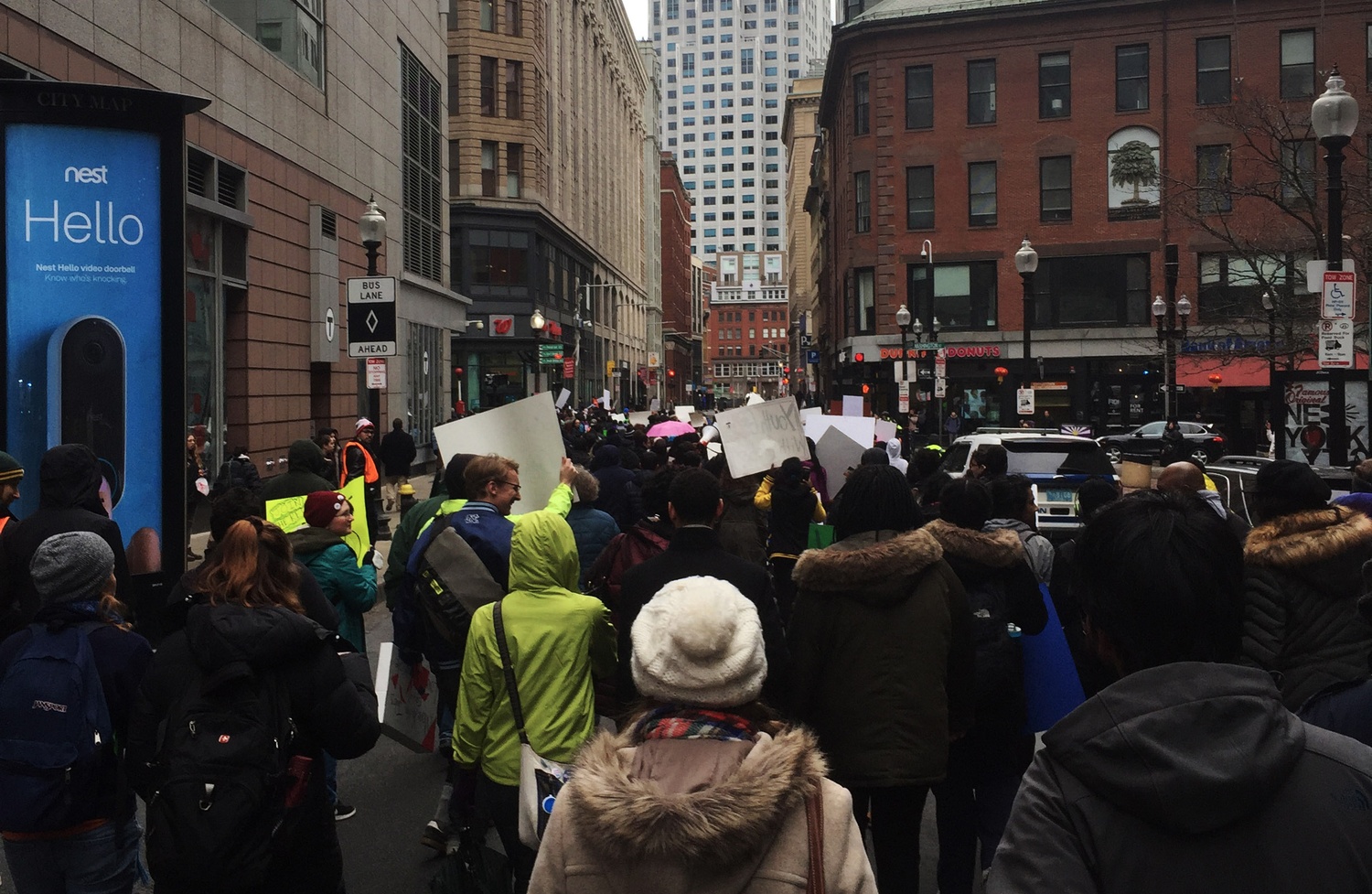 A crowd of people march the streets of Boston for the Dreams of Our Future Youth Jobs Rally on Thrusday afternoon. By Jordan Virtue
By Nina H. Pasquini and Jordan E. Virtue, Crimson Staff Writers

Amid chants of “Jobs not jails!” and sporadic hailstorms, about 20 members of Harvard’s Phillips Brooks House Association joined hundreds of “Dreams of our Future” protesters for the annual Youth Jobs Rally in Boston last week.

The march, which started in the Old South Church in Copley Square and ended at the State House, had three main goals, according to participants. First, protesters demanded an increase in funding from the state for youth jobs in Massachusetts from $10 million to $14 million a year.

Protesters also argued for expungement, meaning the erasure of misdemeanors from juveniles’ records after a certain period of time, and for altering the age of juvenile court jurisdiction to include ages 12 to 18.

The “I Have a Future” youth jobs coalition—which organized the march—argues that a $4 million spending increase for the state’s YouthWorks program should be a financial priority for Massachusetts.

“Young people need to be employed, partially to support their families and partially because there are pretty significant levels of violence and all sorts of other things in the city,” PBHA President Anwar Omeish ’19 said. “What we’re saying is that this should be a funding priority. Ultimately budgeting is a question of what do you think is most important.”

“There was a period of time when they raised the minimum wage from eight dollars to $11, but they never raised the overall funding, so they were paying people more, but they were able to pay less people,” Neudeck said. “So there were around 870 teenagers who lost funding for their jobs.”

“Our Summer Urban Program has 12 camps and serves 800 low-income kids across Boston and Cambridge,” Omeish said. “We employ 100 teens as part of the program, and if we didn’t have the funding for those 100 teens we would only be able to serve about half of that, which is 400 low-income kids in the community.”

Jose G. Coronado Flores ’19, a PBHA member and director of the Mission Hill summer program, said there are now fewer summer jobs available for local students, including those from Mission Hill.

After marching through downtown to shouts of “This is what democracy looks like!” and “What do we want? Youth justice! When do we want it? Now!”, demonstrators entered the State House, where they met in small groups with state legislators.

At the State House, Z-Kiya C. Jant, a sophomore at the Community Academy of Science and Health, a public high school in Boston, said the issue of youth employment is important to her personally.

“Within the community that I live in, there’s a lot of people who have moved towards negative outlets to gain money within the community to try to be successful and provide for their families,” she said. “And me being part of this organization, that’s me trying to say, 'No, you don't need to do that.'”

Adiel M. Pollydore, who helped plan the rally, said she attended the protest because she wanted to help empower young people to make changes.

“Today, I felt a very strong solidarity with the young people who are organizing in Florida right now, and also young people who have been organizing. Young people have organized in Ferguson, in Baltimore, all over,” she said. “I think that young people aren't afraid, and you can feel that energy, that fire, and that hope. It’s infectious. So that's why I'm here.”