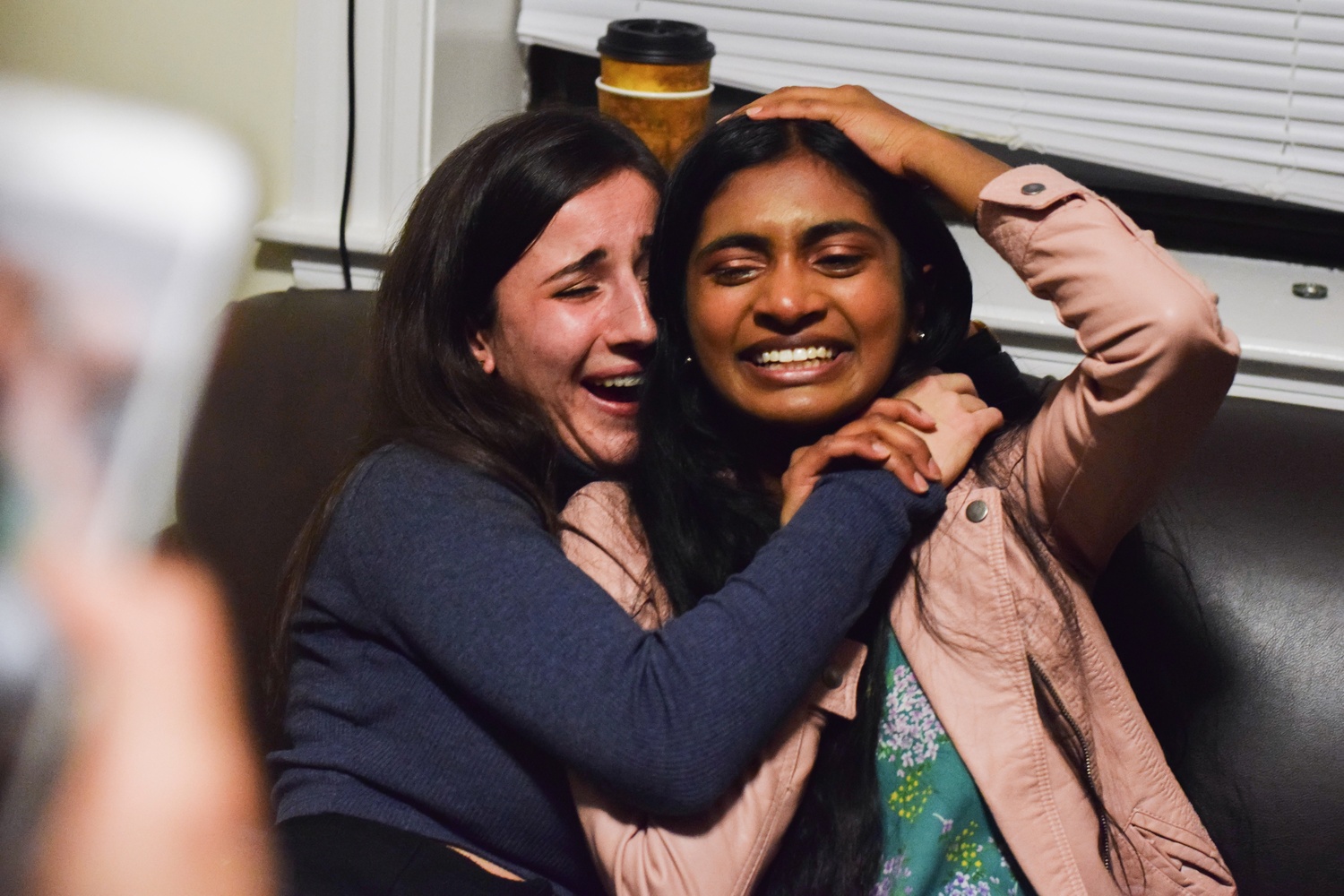 "It's so surreal,” Palaniappan said in an interview Thursday evening, surrounded by fellow students who worked on her campaign.

Huesa said the results left her unable to fully articulate her feelings.

“I still feel like I haven't registered it,” she said. “I still feel pretty normal, but it's one of those things where you don't realize that it's happened until later.”

Palaniappan and Huesa — who will take the reins in December from current UC President Catherine L. Zhang ’19 and Vice President Nicholas D. Boucher ’19 — ran under the slogan “make Harvard home.”

The duo proposed offering funding for some undergraduate social events and called for the creation of cultural climate committees across all academic departments to bolster Harvard's capacity to address sexual assault allegations. The Government department created a committee earlier this year to evaluate departmental culture in the wake of allegations of sexual misconduct against Government professor Jorge I. Dominguez.

Olivia K. Bryant ’21, a member of the Harvard Open Data Project, which polled students about the race last week, said in a Wednesday interview that the new voting method could potentially lead some undergraduates to vote in a more strategic manner. But given the margin of victory for Palaniappan and Huesa, the voting system likely did not change the election’s outcome.

This year’s winners are both longtime members of the UC.

Palaniappan, the Council’s education committee chair, has organized student town halls about proposed changes to shopping week and spearheaded legislation to fund faculty-student dinners. Huesa, who serves as vice chair of the Council’s Student Relations Committee, has participated in efforts to establish a multicultural center on campus.

Palaniappan said she and Huesa plan to work on improving the Council’s communication with the student body in their first days in office.

“I think from the onset, better structuring the way we communicate with students I think is something that we need to already set the tone and plan for,” she said. “I think we're going to work on it before we even leave for break and just get off the ground running.”

Huesa said she hopes to increase the diversity of the UC, a push that she noted would need to begin shortly, given the Council’s spring elections occur in mid-February.

“I think recruitment for midterm elections will also be really important because there's a lot of underrepresented communities on the Council so far and people just generally don't know what they can do on the Council,” she said.

Huesa added that she would work to ensure that the Council’s identity caucuses are fully “instituted” by the beginning of next semester.

Zhang said in an interview Thursday that she is “excited” for Palaniappan and Huesa to begin their term.

“It’s going to be an amazing, challenging, and learning adventure,” she said. “And I have full confidence in them.”

Boucher agreed, saying he was eager to see what the duo would accomplish during their tenure.

“I think they’re an exceptionally deserving ticket, and I cannot wait to see what they will do over the coming months,” he said.

Before the results were released, Ragheb — the only presidential contender who had not previously served on the UC — said that campaigning for the student body’s highest office had been an “amazing experience.”

“All three tickets would do amazing things after being elected,” he said. “I think all three tickets, and we especially, generated a lot of enthusiasm on campus for something that people normally don’t turn out for.”

Ragheb and Miller’s loss represents the 22nd time in the past 23 UC elections that outsiders have fallen to tickets with previous UC experience.

Voters also weighed in on two referenda in this week’s election, after the Council decided to place them on the ballot at its meeting last Sunday. The first — which calls on Harvard to divest from the “fossil fuel industry” — won support from 71.5 percent of voters. That figure is virtually unchanged from 2012, the last time students voted on the issue. In that election, 72 percent of students voted in favor of fossil fuel divestment.

James H. Coleman ’21, co-president of Harvard Undergraduates for Environmental Justice, which campaigned in support of this year’s referendum, called the results “encouraging,” especially in light of the 2012 vote.

“That really shows that the student body still has a really strong sentiment for divesting from fossil fuels,” he said.

Responding to the referendum, University spokesperson Melodie Jackson wrote in an emailed statement to The Crimson last week that Harvard would not change its investment strategy with respect to fossil fuels, but remained “committed” to tackling climate change in other ways.

“The commitments made in Harvard’s Climate Action Plan explicitly recognize what the science has made clear: the world must move quickly to end its use of fossil fuels,” she wrote. “While we agree on the urgency of this global challenge, we respectfully disagree with divestment activists on the means by which a university should confront it.”

The second referendum on the ballot, which urged the University to divest from the “prison-industrial complex,” garnered 77.2 percent of the vote.

Asked in October whether Harvard would consider divesting from prisons, University President Lawrence S. Bacow reiterated what his predecessor, Drew G. Faust, repeatedly stated throughout her tenure: the endowment is not the appropriate mechanism to effect social change.