At Bacow’s Inauguration, Pomp and Protest 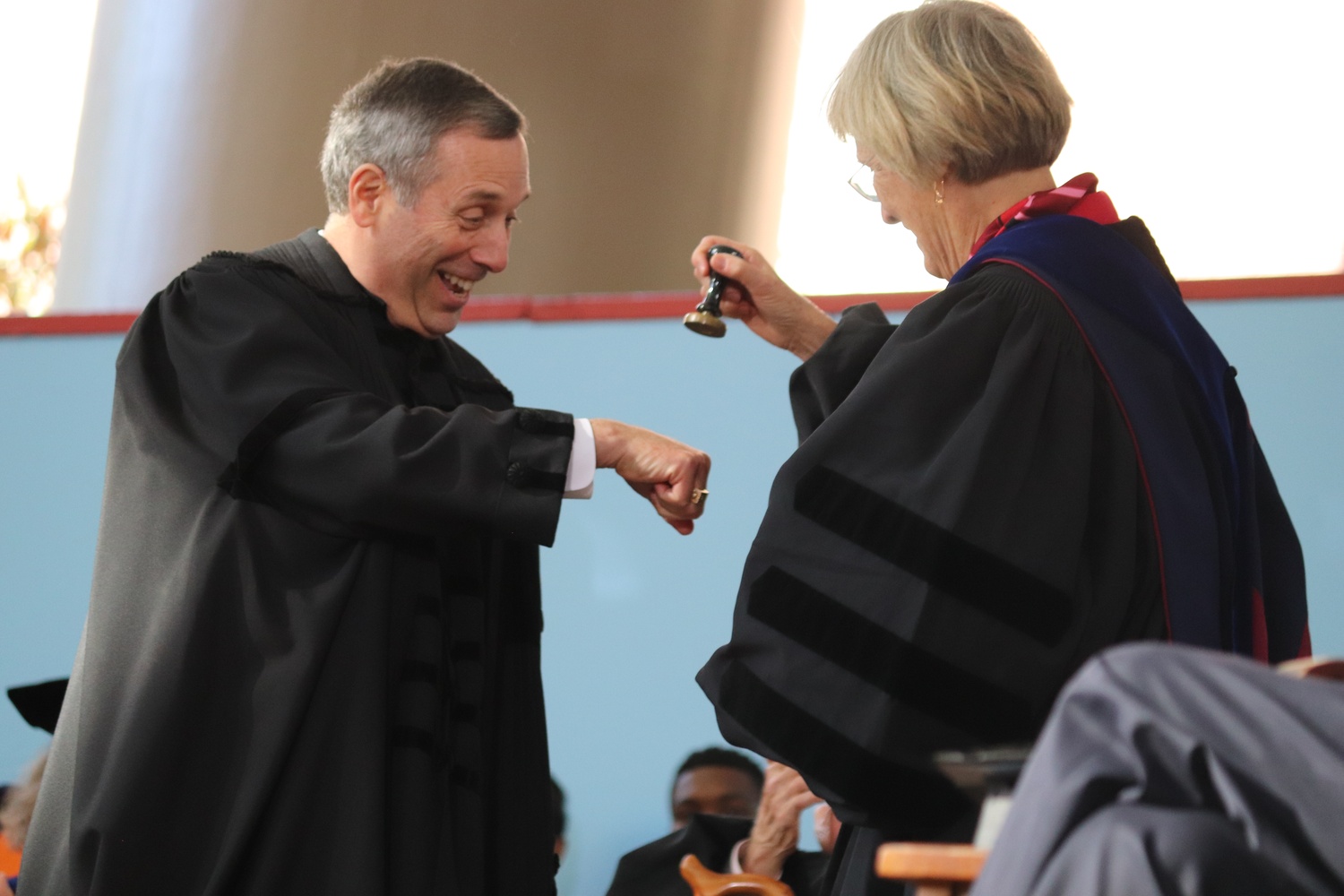 It’s not often that five Harvard presidents gather in one place.

Friday was one of those rare occasions, as the last four presidents descended on Harvard Yard to ceremonially welcome Lawrence S. Bacow to their ranks.

Though Bacow officially assumed office July 1, the University reserved pomp and circumstance until students returned to campus. Hundreds of academics from within Harvard’s ranks and institutions around the country dressed in robes of all colors, patterns, and fabrics to celebrate Bacow’s ascent to higher education’s top job.

In his first months in office, Bacow has already begun to articulate some of his priorities, which center around combatting the hostile political climate surrounding higher education — issues he spoke about in his inaugural address.

But before Bacow took center stage, the afternoon began on a lighter note with a cheeky address from L. Rafael Reif, the president of the neighboring Massachusetts Institute of Technology.

“We spent decades getting Larry ready,” Reif said, referencing Bacow’s undergraduate career at MIT and drawing laughs from the crowd. 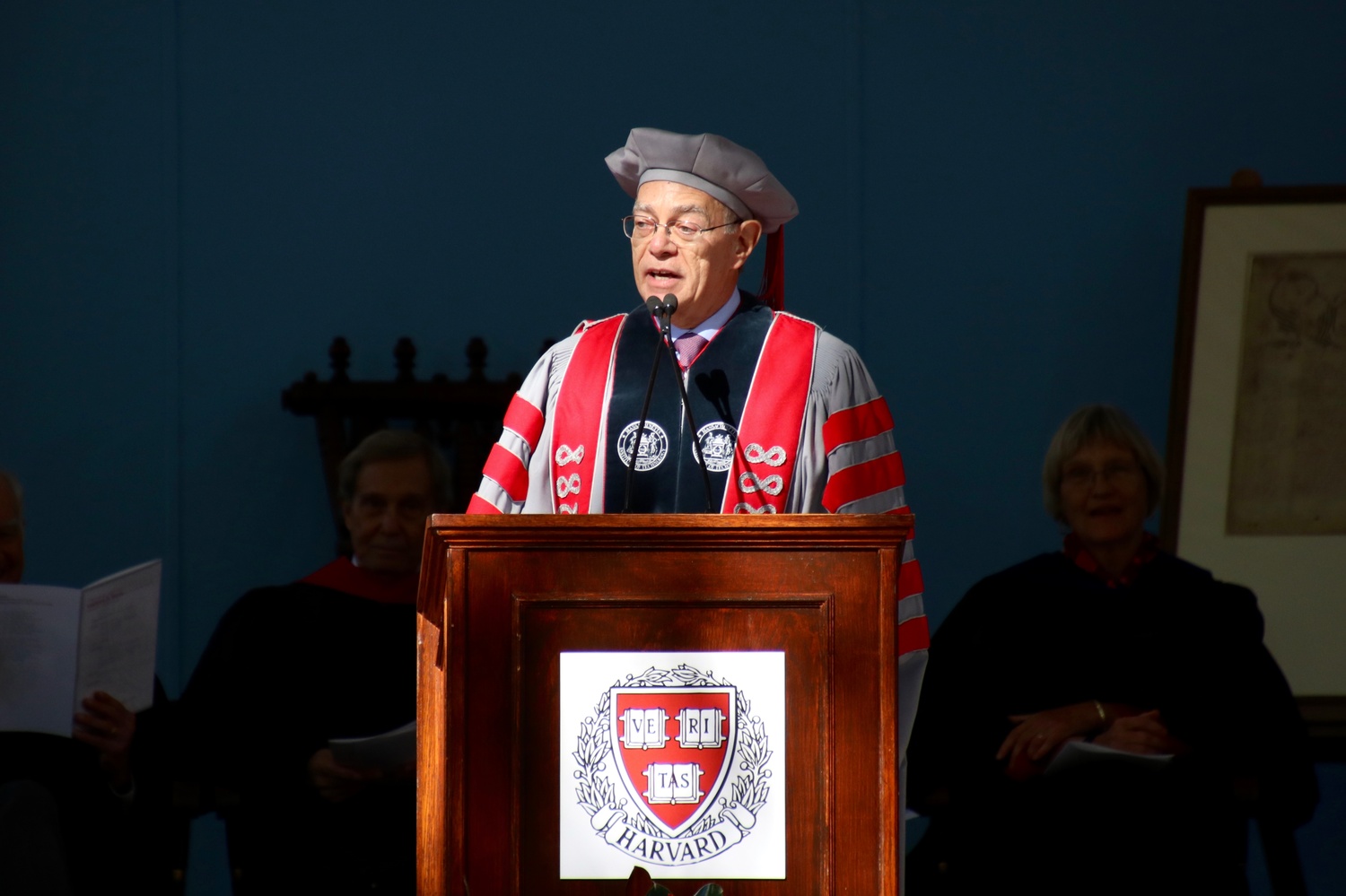 Cambridge school rivalries shone through Reif’s speech as he spoke about Bacow’s involvement at MIT and MIT’s influence on Bacow’s career. Bacow served as MIT’s chancellor for three years until 2001.

“That’s when we taught him the fine art of working with faculty over whom you have no actual power. In 2002, we sent him to Tufts, so he could have a hand of being president. And finally, and this was the tricky part, we had to get him installed on Harvard’s presidential search committee,” Reif said. “I’m not allowed to reveal our methods. Obviously, it worked. So, as you can see, the best MIT hacks take time.”

Following Reif’s facetious assertion that MIT might have hijacked Harvard’s leadership selection process, a string of speakers took the stage, welcoming Bacow from every corner of the University including the students, faculty, staff, and alumni.

“Larry knows Harvard is not a place, it’s an idea which can also be the face of higher education, where every day we make the unknown perceivable and the impossible achievable,” she said. 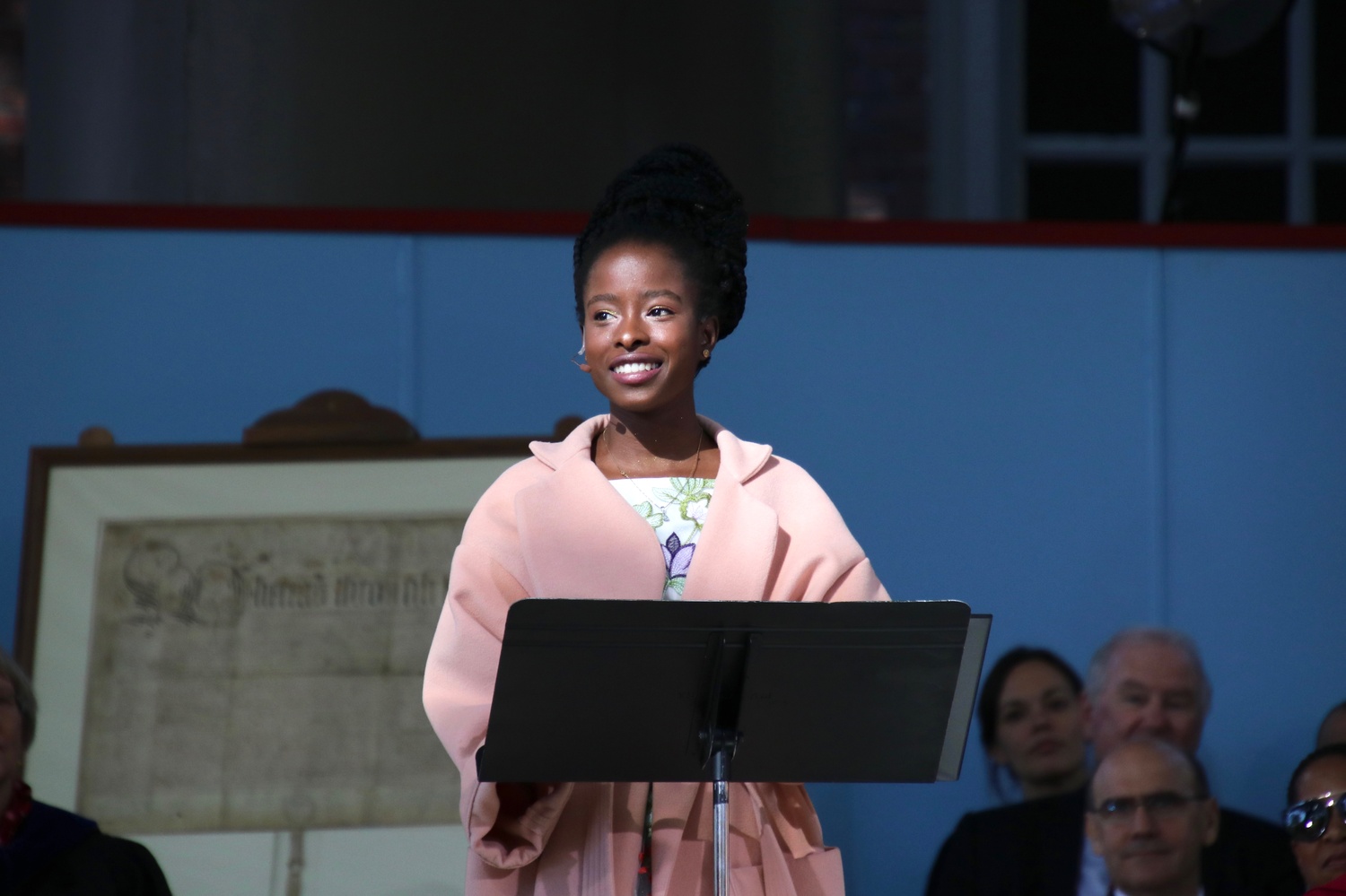 The main event, though, was Bacow’s nearly 35-minute speech highlighting the key themes of his presidency thus far. After taking a quick seat in the notoriously uncomfortable president’s three-legged chair, he stepped up to the podium to talk about issues including public service, immigration, and ideological diversity.

Bacow addressed common criticisms of higher education, including that it has become “unaffordable,” “inaccessible to” and “out of touch” with the rest of the country. He invoked critiques that colleges and universities are not “nearly as open” to ideas from across the political spectrum “as we should be.”

“For the first time in my lifetime, people are expressing doubts about whether colleges and universities are even good for the nation,” Bacow said. “These questions force us to ask: what does higher education really contribute to national life?”

Bacow said higher education is a “public good” and that Harvard has an “obligation” to the public. He added that he hopes every Harvard graduate will be an “active, engaged, enlightened citizen.”

Bacow also announced a commitment to funding public service internships, which are often low-paid or unpaid summer positions, for every undergraduate who would like to pursue a position in that sector.

“I am pleased to announce today that we will work towards raising the resources so we can guarantee every undergraduate who wants one a public service internship of some kind, an opportunity to see the world,” Bacow said.

The commitment to increasing support for public service jobs echoes a promise that Faust made in her 2010 Commencement address, in which she announced that Harvard would commit to “doubling the current amount of funding for undergraduate summer service opportunities, and a significant increase for graduate students.”

In May, a bipartisan group of six senators — including Elizabeth Warren (D-MA) — penned a letter to Faust asking her to fulfill that commitment, writing that travel and living costs make accepting an unpaid or low-paid position “a real challenge” for many students who demonstrate a “strong interest” in pursuing public service jobs.

Bacow’s call for civic engagement during his inaugural address comes after he urged Harvard students to register to vote and cast a ballot in the midterm elections in an email headlined “Democracy” Tuesday. In that message, Bacow called voting “the first responsibility of citizenship in a democracy.”

Bacow also focused in his speech on supporting immigrants and acknowledging their significance to Harvard and higher education more broadly. Drawing on his parents’ own stories of immigration to the U.S. after facing persecution in Europe before and during World War II, he talked about the necessity of embracing and supporting immigrants, especially in the face of growing national hostility.

Bacow wrapped up his speech by talking about the importance of ideological diversity — also the theme of Massachusetts Governor Charlie D. Baker ’79 earlier in the afternoon.

“We should not be afraid to welcome into our communities those who challenge our thinking,” Bacow said.

But not every member of the crowd shared in the day’s celebratory sentiment. In the first few minutes of Bacow’s speech, 30 protestors on the steps of Widener Library started chanting, “Hey, Larry, time’s up.” The group wore black in support of survivors and wore stickers emblazoned with phrases related to the #MeToo movement, such as “I Believe Her,” “Times Up Harvard,” and “Believe Survivors.”

At the beginning of the event, the protestors — including students from the College, Harvard Kennedy School, Harvard Law School, and the Graduate School of Education —carried signs reading “The silence is killing me,” forming a line silently during the academic procession. As faculty streamed in to take their seats in Tercentenary Theatre, the protesters handed them stickers to affix to their robes.

Charlene A. Wang, a student at the Kennedy School and one of the protest’s organizers, said the inauguration was “great opportunity to make a statement.” 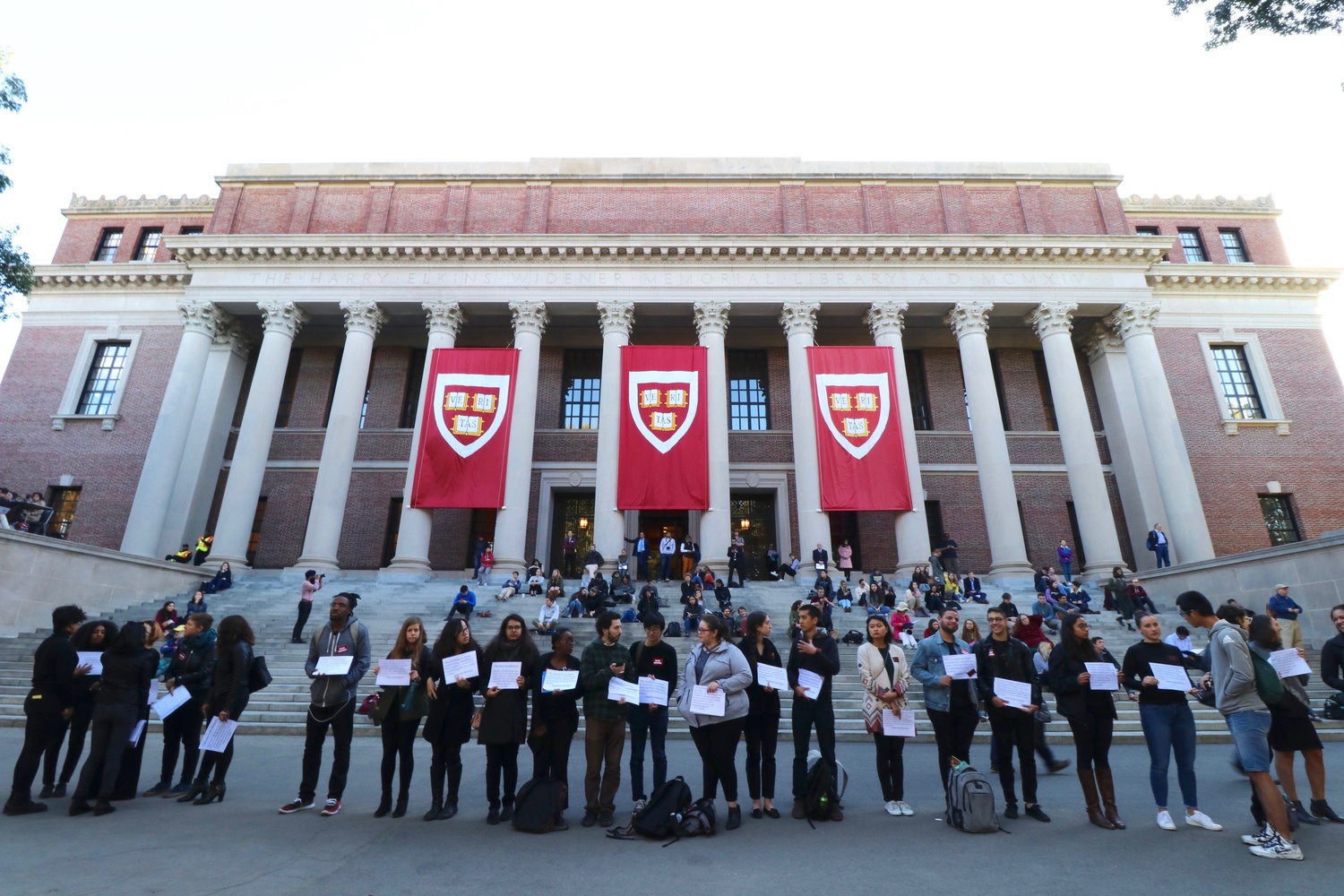 The protest’s timing coincided with the U.S. Senate Judiciary Committee’s hearings on the nomination of Judge Brett M. Kavanaugh to the Supreme Court. At least two women have accused Kavanaugh of sexual assault, and their allegations roiled the judge’s confirmation process, sparking protests at Harvard and across the country over the past two weeks.

Kavanaugh is expected to be confirmed to the nation’s highest court tomorrow.

Karyn L. Bruggeman, a student at the Kennedy School and participant in the protest, said she felt it was important to highlight the presence of sexual assault on academic campuses as well.

“Given that academic institutions are also places that have mishandled these issues of sexual harassment and rape in the past, it felt important to students to show up and have a visible presence and remind people that this is an issue that Harvard, as well as other institutions, shouldn’t ignore,” Bruggeman said.

"The safety and well-being of our community remains the University’s top priority," she wrote."We have worked hard in recent years to develop strong policies and procedures, to significantly expand our training and prevention efforts, to increase the support services available to our community members, and to raise awareness of them across campus."

A previous version of this story incorrectly indicated that University President Derek C. Bok is a graduate of Harvard College. In fact, he completed his undergraduate degree atStanford University.