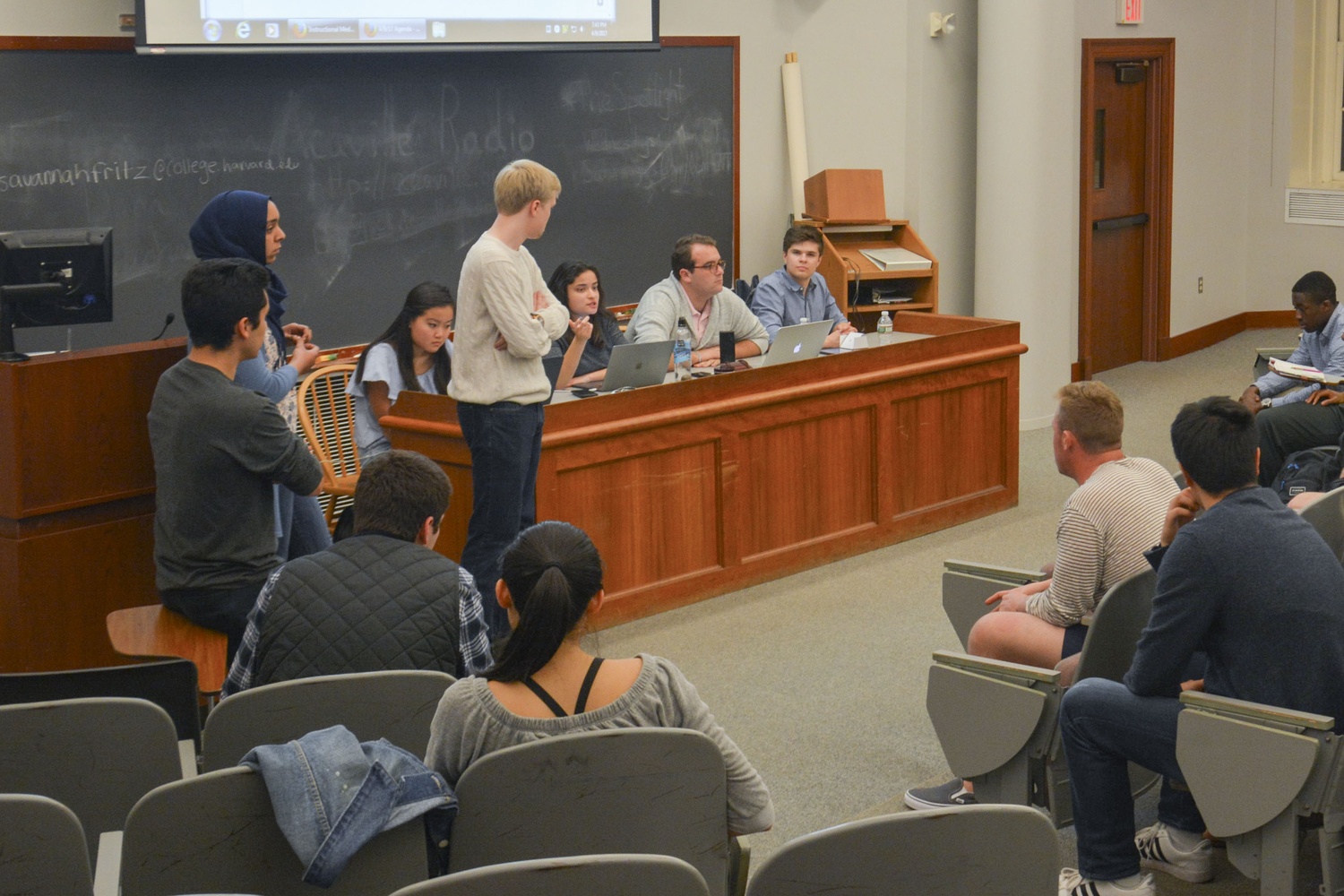 Eduardo A. Gonzalez ‘18, Salma Abdelrahman ’20 and Evan M. Bonsall ’19 present a letter condemning Dean of the College Rakesh Khurana’s rejection of the proposal for a summer bridge program for low-income students at the Undergraduate Council meeting on Sunday evening. By I. Blu Frankel
By Andrew J. Zucker, Crimson Staff Writer

The Undergraduate Council signed a letter of support for a summer program for low-income and first generation students at its general meeting Sunday after members debated specifics of the letter’s language.

Last month, Khurana rejected a proposal calling for a brief freshman pre-orientation program to help low-income students adjust to Harvard. That decision has been controversial among some students and several members of the UC.

UC Vice President Cameron K. Khansarinia ’18 said he thought it would be inappropriate to censure Khurana when his intent behind the rejection was not clear.

“It’s just inappropriate to me to say he’s acting against the mission of the College, even though to us it may be perceived that way, we don’t know that to be true and I don’t think we should accuse people of acting in such a way,” Khansarinia said.

Khansarinia and Winthrop House representative Vimal S. Konduri '17, an inactive Crimson editor, requested an amendment to the letter that struck the phrase “conflicts with our community’s core values” from the letter and replaced it with language stressing the UC’s “disappointment in the rejection.”

However, UC Rules Chair and Winthrop representative Evan M. Bonsall '19 said he believed a letter of support needed to push back more strongly against the administration.

“I think that if we want change to happen on this campus, especially if it’s change that has to happen as a result of administrative action, that it’s important for us to actually say something,” he said.

Meanwhile, Crimson Yard representative Nadine M. Khoury ’20 said she believes that if the Council hopes to work with Khurana to create a summer bridge program, the body is better off not provoking College administrators.

“If we want a bridge program, it’s going to happen through us collaborating with the administration,” she said.

UC members also debated about whether or not to include a reference to data from a similar program at Yale in the letter. The letter initially stated that “Summer Bridge Programs at many of our peer institutions have demonstrated both their value and efficacy.” It subsequently included a link to data that claimed program participants had higher GPAs, but representatives were uncertain about the data’s reliability.

“It’s super important to keep good data in your argument, but the worst thing you can do is try to draw data that’s not good. I mean that just makes you look sloppy and unprepared,” he said.

After much debate, Mather House representative Eduardo A. Gonzalez ’18—a vocal supporter of the bridge program who helped draft the letter—proposed an amendment to the letter by restructuring the sentence, deleting “efficacy,” and adding “importance.” Additionally, Gonzalez’s amendment removed the data reference.

“I am no expert when it comes to evaluating data or really being able to vet that particular source, and I would much rather present something that I’m 100 percent comfortable with,” he said.

Both amendments ultimately passed and the UC is planning on releasing the full letter soon.