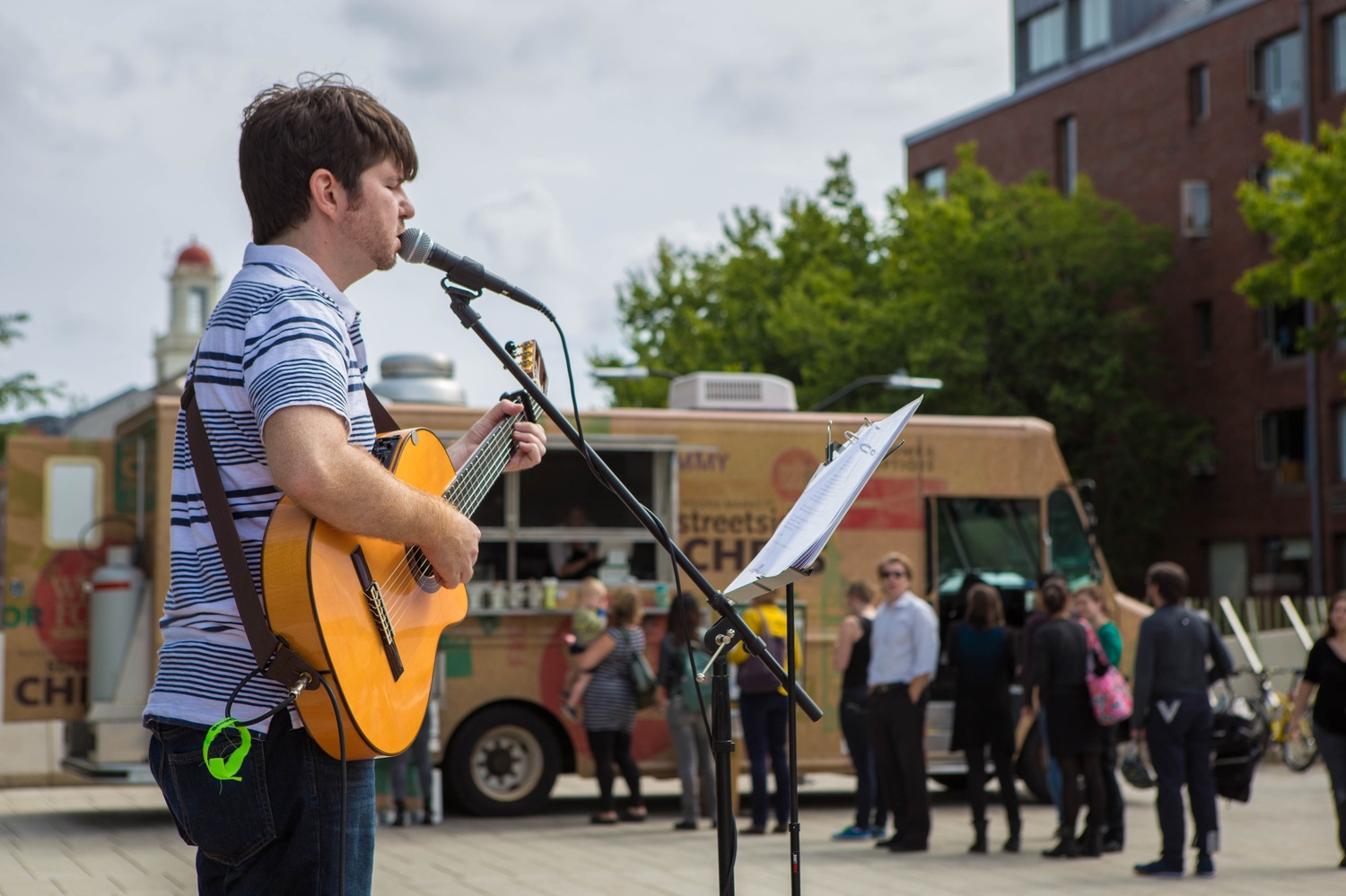 Patrick Yerby, a local musician, plays the guitar and sings at the most recent Pop Up Performance on Tuesday afternoon in the Science Center Plaza. Yerby plays a range of cover and original songs. By Cynthia Guo
By Jonathan G. Adler and Jamila M. Coleman, Contributing Writers

Harvard affiliates and Cantabrigians listened to local musician Patrick Yerby perform modern pop and classic rock songs at a “pop-up” concert in the Science Center Plaza on Tuesday afternoon, part of a series of recent performances there.

Yerby, a guitarist and vocalist who plays a range of covers and original material, emphasized that the concert offered a chance to practice performing.

“Any kind of opportunity where you can play in front of people is awesome,” Yerby said. “In a city like Boston where there’s so many talented musicians, sometimes there are fewer gigs per musician than there should be.”

One attendee also noted the benefit of a venue for demonstrating artistic talent.

“It’s great that there’s a space for performers who want to make it—to have a space for them to showcase their talents is awesome,” Stephen J. Kim ’15-’16 said.

The concerts are part of a University-wide effort introduced in the summer of 2009, after University President Drew G. Faust assembled a Committee on Common Spaces in 2008. The initiative, known as Common Spaces, seeks to liven up Harvard’s public spaces with artistic performances and workshops, according to Lara E. Adams, the associate director of common spaces operations.

“It’s a really fun space,” said Adams, referring to the Science Center Plaza. “The community loves it, the students love it.”

Common Spaces organizers initially chose performers primarily from students in Harvard’s arts programs, but more recently, they have invited performers from the Boston area more generally. Students, faculty members, and local residents alike are welcome to indicate their interest in performing through a form on the Common Spaces website, Adams said.

Several spectators said they were pleased with the opportunity to hear live music as they went about their days.

“It's kind of nice to just sit here and eat lunch, listen to the music and go back to whatever you were doing,” said Tomasz Macieik, who works as a lab technician at a Faculty of Arts and Sciences lab.

"It's really very lovely,” said Mark Z. Jia, a student at Harvard Law School. “I wish it were here every day.”