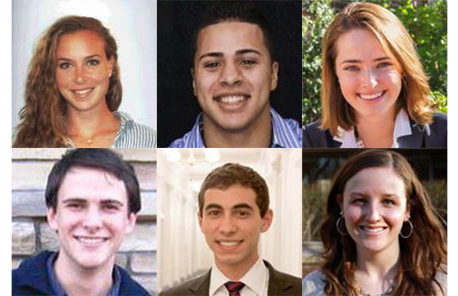 Five Harvard College seniors and one Harvard graduate from the Class of 2013 were named Rhodes Scholars and will enter Oxford University in October 2014, the Rhodes Trust announced Saturday.

Harvard was the top represented school on the list of American Rhodes winners this year, followed by Yale and Stanford, who had three winners each. The selected students join a class of 32 total Americans awarded the scholarship each year through a rigorous two-stage selection process, which takes into consideration academic performance, leadership potential, philanthropic interest, and athletic accomplishments.

In interviews by phone and email on Sunday, Harvard-affiliated winners expressed gratitude for the chance to study at Oxford.

“Words can’t express how grateful I am for the Rhodes Trust for blessing me with this scholarship,” said Diaz, a psychology concentrator who will join the comparative social policy program at Oxford.

Singer, who is concentrating in economics, wrote in an email that at Oxford he plans to pursue a master’s degree in economics for development and urban geography, focusing on strategies to confront youth poverty in the United States and internationally.

“I've learned so much from my friends, professors, and mentors at Harvard the past four years. It's because of them that I have this opportunity today,” Singer wrote.

Griffin, a classics concentrator who plans to pursue a master’s degree in theology in the Christian ethics track at Oxford and ultimately work in bioethics, wrote in an email that she was astounded when she learned she had been named a Rhodes Scholar.

“I was honored and humbled because I had spent some time with the other candidates and knew that they were all amazing people,” Griffin wrote.

The winners agreed that the competition for the coveted 32 spots was fierce.

“Everyone who was competing as a finalist was top-notch,” Diaz said, adding that he thinks his “undying passion for helping those who are least well-off in society” was what made him stand out among the other applicants.

For her part, Griffin wrote that she believes she won the scholarship because she is “firmly committed to fighting the world's fight through bioethics, using principles from my faith and education in the Classics to address questions never asked before about emerging biotechnologies.”

The selection of Harvard’s newest American Rhodes Scholars brings the University’s total to 348 since the scholarship was first established in the will of Cecil Rhodes in 1902.