The Burrito Brawl: A Case for Felipe's 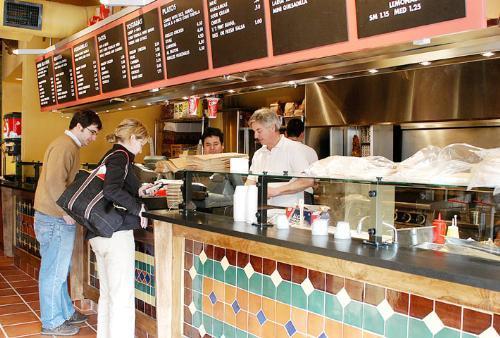 It's an argument almost as old as the burrito itself, and students for generations have devoted untold hours to debating the best burrito joint in Harvard Square. Over the next few days, members of The Crimson's summer staff will make a case the Big 4 of Square burritos: Boloco, Chipotle, Felipe's, and Qdoba.

Like many Harvard students, I was struck by one question when I first explored Harvard Square: why on earth were there four burrito places within a few blocks of each other? Within a few months of living in Cambridge, however, that enigma had been replaced by another: how on earth do Boloco, Chipotle, and Qdoba compete with Felipe’s?

It’s a question that still mystifies me today. In addition to its prime location in the Garage, Felipe’s features more seating than any other burrito joint. When it’s snowing, raining, or below 10 degrees, that makes a big difference.

But it's the burritos, which feature delectable ingredients and sturdy tortillas, that what really distinguish Felipe’s. No other Harvard Square burrito establishment can compare to these gems.

Boloco, though deservedly lauded for its incredible smoothies, offers burritos just as unconvincing as their faux-Mexican moniker. Due to its somewhat flavorless ingredients, you’ll most likely leave Boloco feeling unsatisfied, even if you don’t purchase the unfortunately named “disturbingly small burrito.” Qdoba’s fillings may be slightly better, but not by any large margin.

And though the contents of Chipotle’s burritos are often excellent, their tortillas are much too flimsy to provide a truly satisfying experience. When I find myself eating a burrito from Chipotle, it’ll nearly always end up falling apart in my hands.

Most important, however, is the fact that Felipe’s is the only burrito joint open later than 11 p.m. On Thursday, Friday, and Saturday nights, you can get a burrito until two in the morning. And since it’s a Felipe’s burrito, it's an an undeniably great way to end the night.