Give and Go: Men's Basketball 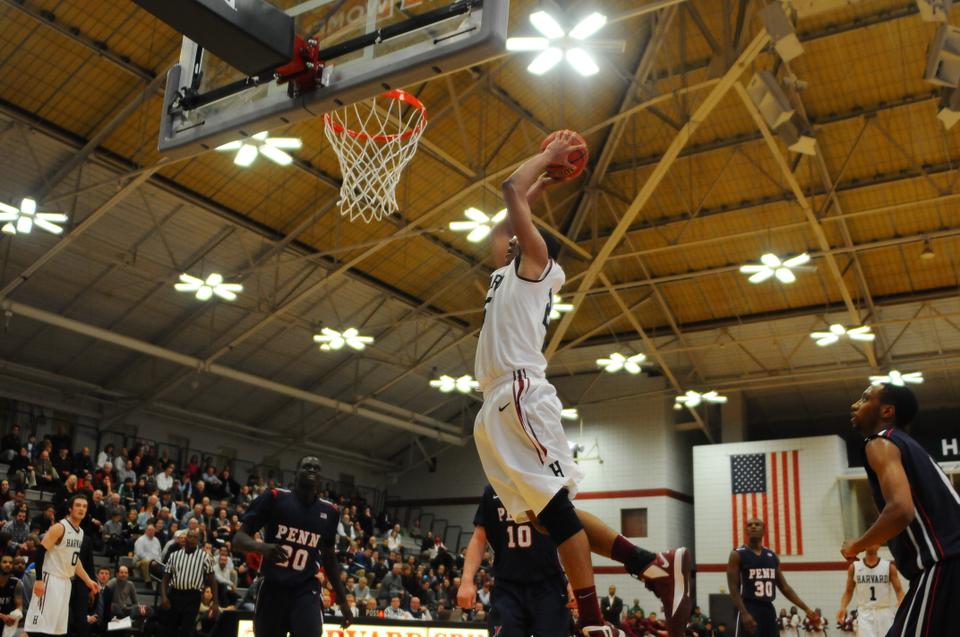 In games against Penn and Princeton, sophomore Kenyatta Smith tallied a total of 34 points, 16 blocks, and 16 rebounds. Smith set career highs in each of those three categories in Friday’s contest against the Quakers.
By Catherine E. Coppinger, David Freed, Martin Kessler, and Hope Schwartz, Crimson Staff Writers

On the way back from a tough road trip at Princeton and Penn, the Harvard men’s basketball beat writers convened to discuss the events of the weekend. Below are the highlights from the exclusive taped conversation made available to The Back Page.

David Freed: “Has Siyani Chambers been figured out by the Ivy League?”

Catherine E. Coppinger: “I don’t know if that’s true. Penn definitely figured out how to contain him.”

DF: “He doesn’t shoot from outside and he’s not getting into the lane. He’s 3-14 in his last five games.”

Hope Schwartz: “That’s crazy because he started out as one of the strongest three-point shooters on the team.”

DF: “It helps that nobody sets screens for him on pick-and-rolls. Steve’s screen is basically a show-and-roll to them.”

On the way the Quakers played:

Martin Kessler: “I was just impressed by Penn and a lot of people will look at the game and say that Harvard lost because they were considered to be favorite but I feel like Penn won that game the way they played.”

HS: “You can’t say enough about their defense this weekend. Harvard was shooting twenty percent for most of the first half. It was ridiculous and going one for ten from three, whatever it was, that was great.”

MK: “Penn is going to be very good in years to come. The Hicks-Chambers matchup will be a good one to watch going forward.”

On the final shot against Penn…

MK: “Although that last play, it was really well executed. Relatively, Webby had a fairly open look.”

CEC: “That was a lot better than the look they got two nights ago against Princeton.”

HS: “If he’d had a second or two more, I think he probably could have had an open look. He was pretty open”.”

DF: “Definitely feel like it should have been Rivard taking that last shot though.”

MK: “It was weird that all those plays were run for Webby in the second half. They didn’t find Rivard at all.”

On the importance of sophomore forward Kenyatta Smith…

CC: “I still think it’s crazy that we lost both those games.”

DF: “It’s weird how much our expectations have changed because this is basically a team with five guys that didn’t play at all for most of last year. And they’re probably only going to lose three in the Ivy League.”

HS: “After the games against Penn and Princeton, it’s interesting to think that now they have lost to both those teams and how much those wins were a fluke because of how Yatta played. He turned in a performance he probably won’t ever repeat.”

DF: “We saw against Princeton how bad it was when we didn’t have Yatta in rebounding. He’s really our only interior defender there.”

HS: “What he did besides the monster numbers was that he broke up Princeton’s rhythms and altered their shots.”

DF: “When you have a guy like that behind you that it helps a lot as far as knowing that on the perimeter you can focus more on denying them threes and not worrying about letting them go by you as much.”

On the growth of sophomore forward Steve Moundou-Missi…

HS: “I think Steve was really impressive at the line this weekend.”

DF: “Steve has been the most impressive person and most consistent Crimson player for us this weekend. He really works on us. He was out there two hours early.”

HS: “That was a major concern early in conference games it that he couldn’t hit free throws with any consistency but it definitely seems like he has figured it out and you can use him in these clutch situations down the stretch where he has a lot of composure."

DF: “Agunwa’s an interesting player. He got the same recruiting grade at Yatta.”

MK: “He has the potential to be a Saunders-type defender on the perimeter and I think he came in a bit less raw offensively than Wes. Obviously Wes has taken ten steps forward but Agunwa is farther along at this point than Wes was midway through last season.”