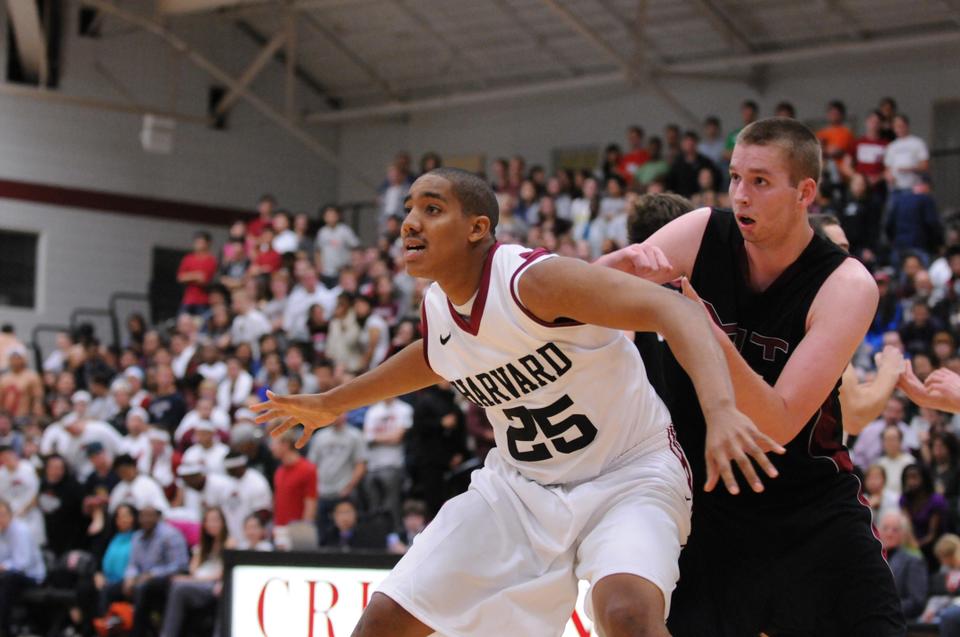 Sophomore center Kenyatta Smith had a breakout weekend for the Crimson as it hosted Penn and Princeton in Lavieties Pavilion. Scoring a career-high 20 points and recording a program-best 10 blocks, Smith was just one rebound shy of a triple-double against the Quakers on Friday night.
By Catherine E. Coppinger, David Freed, Martin Kessler, Hope Schwartz, and Juliet Spies-Gans, Crimson Staff Writers

This weekend marks the last road stint for Harvard of the 2012-13 season. With games at Princeton and Penn on deck for this weekend, the Crimson has the chance to seal its place at the top of the Ivy League standings with back-to-back wins. The Crimson’s basketball beat writers answer five questions about this weekend’s match-ups.

1) Riding a four game win-streak, what kind of momentum does the Crimson have going into this weekend?

JSG: After last Saturday's win over Yale, I feel like Harvard has finally shaken off some of its hesitancy and is hungry for two more wins this weekend. The Bulldog match-up tested Harvard—the home team fought back against the Crimson, even taking the lead at one point, forcing Harvard to continually seek new ways of scoring and regain the advantage. After a huge first half from sophomore Wesley Saunders, the Crimson was able to turn to others for its offensive output in the second period, an option that was less available earlier in the season. The fact that this game was against perennial-rival Yale made a difference, too—the squad got the big win in front of an even bigger crowd, and was even able to land Saunders' first-half dunk on SportsCenter. All of this, I believe, will add to both the team's confidence level and momentum going into this weekend's dates with the Killer P's. If you had asked me this question after last Friday's game against Brown, where the Crimson temporarily fumbled away a large advantage in the second period due to an uncharacteristically poor shooting night, my answer would have been radically different. But wins help. SportsCenter helps. And, of course, beating Yale will always augment a team's momentum going forward.

2) What were the main keys to Harvard's success in its 69-57 win over Princeton at Lavietes two weeks ago?

HS: The keys to Harvard's win over the Tigers were being efficient on offense, limiting Ian Hummer, and defending the perimeter. The Crimson shot 48 percent from the field to Princeton's 40 percent, and had five players in the double digits. Sophomore forward Kenyatta Smith led the way with 14 points on five-for-five shooting from the field, and Harvard outshot the Tigers across the board. With top scoring sophomore Wes Saunders given the task of guarding Princeton's Ian Hummer, the Crimson had to find its offensive spark elsewhere. Saunders stayed tough on Hummer, who put up 18 points but was limited to 7-for-14 shooting. Smith's six blocks and seven rebounds were huge in breaking up Hummer and the Tigers' offensive rhythm. Finally, Harvard focused on limiting Princeton from deep. The Tigers--the second best three point shooting team in the Ivy League after Harvard--sunk four of their 11 shots, while the Crimson hit 7.

3) What should Harvard look out for this time around in its away match-up against the Tigers?

DF: If the Crimson is going to break its two-decade drought at Jadwin Gym on Friday, it will need to play its best game of the season. Since Harvard last defeated the Tigers, Princeton posted its two most impressive performances of the year in double-digit road victories over Cornell and Columbia. The Tigers posted a +34 point margin on the same trip the Crimson posted a -18 on just two weeks ago. In that same time span, Tiger star forward Ian Hummer has been on fire. Hummer made 17 of his 23 shots taken during the trip, compiling eight assists against just three turnovers and scoring 40 points on the weekend. In Lavietes, the strong interior defense of Kenyatta Smith and Moundou Missi—who rejected Hummer three times—helped Harvard force the Tigers to the perimeter, where they shot only four for 11 from behind the arc. Playing at home, the Crimson should expect Princeton to come out firing. Against both Cornell and Columbia, the Tigers asserted themselves early and entered halftime with double-digit leads. It will be Hummer’s last weekend at Jadwin Gym to cap off an illustrious career for the forward, who leads his team in points, rebounds, assists, and blocks. The crowd will be ready and with the Tigers will be looking to seize their opportunity to get back into the Ivy race, the Crimson has to play forty minutes of its best basketball.

4) How can Harvard make sure to easily handle the Quakers after a sure-fight against Princeton the night before?

MK: Perimeter defense will be the key to a Harvard victory over Penn this Saturday. When the teams last met, the Crimson clamped down on the Quakers' talented guards Tony Hicks and Miles Cartwright, holding the duo to 15 points on 5 of 21 shooting. If the Crimson can come up with a similar performance this weekend, Harvard should earn a season sweep of Penn for the first time since the 2010-11 season.

5) If Harvard wins out this weekend, what can Crimson fans expect for the rest of the season?

CEC: As is probably obvious by now, this is a huge weekend for the Crimson.

With two wins, Harvard would clinch at least a share of its third-straight league crown, improving to 11-1 in conference play while handing Princeton a key third tally in the Ivy League loss column. If that happens, it would be tough for anyone to catch the Crimson in the Ivy standings. If they lose to Harvard this weekend, the Tigers would need to win out and hope the Crimson drops both of its final two conference games at Lavietes Pavilion, in which case they would also earn a share of the title--and force a playoff for the league's automatic bid to the NCAA tournament.

But if history is any indication, getting two wins on the road against the Killer P's is easier said than done. Although the Crimson is the favorite heading into both of this weekend's contests, Harvard hasn't won at Jadwin Gymnasium since Feb. 3, 1989--before anyone on the current Crimson roster was even born. And the last time Harvard swept this road trip was during the 1984-85 campaign. At this point, the Ivy League's automatic bid to the Big Dance--along with the Ancient Eight title--is still very much up in the air.