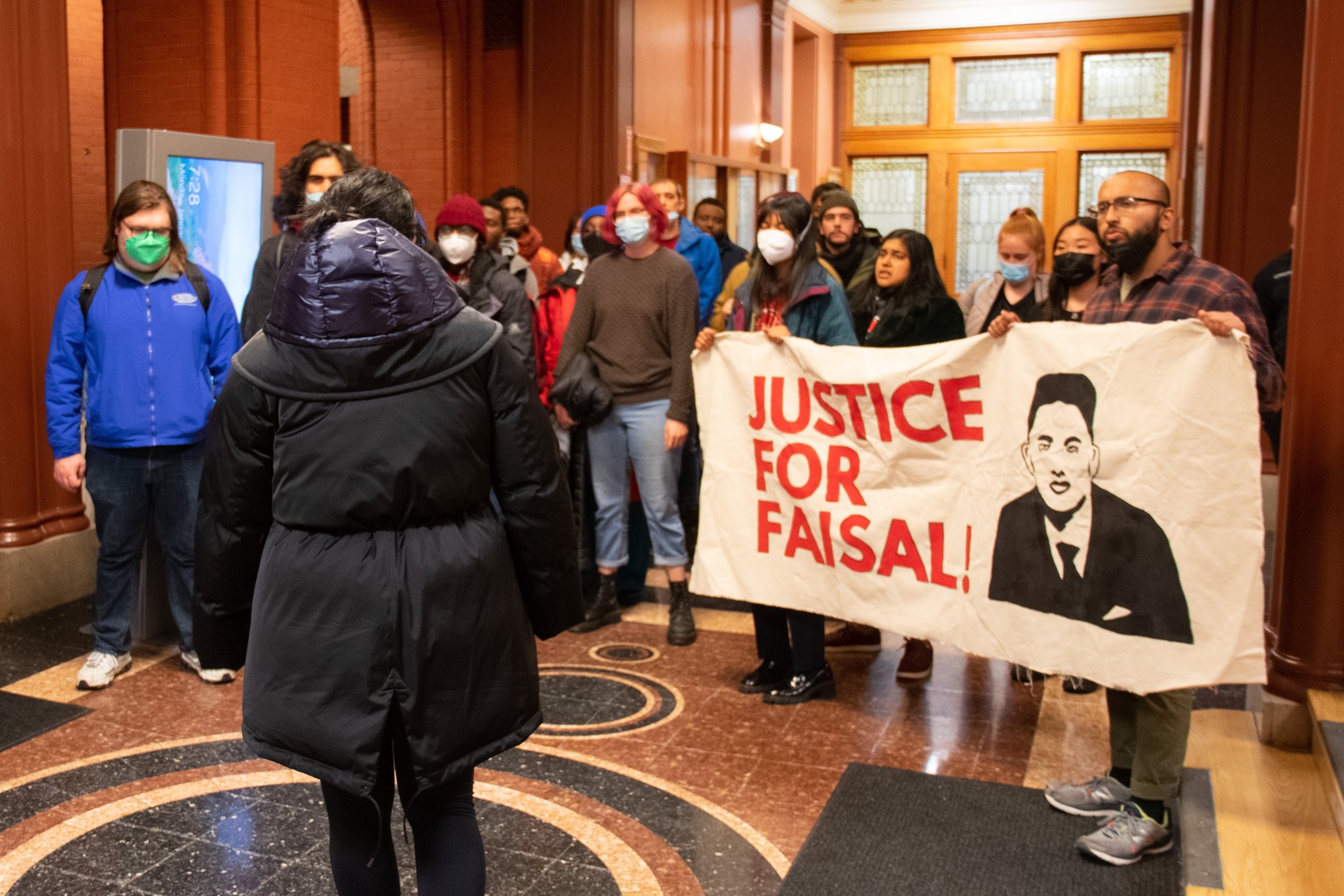 Protesters stormed Cambridge City Hall and marched into Cambridge Mayor Sumbul Siddiqui’s office Monday evening to demand answers on the police killing of Sayed Faisal, calling on city officials to release the names of the officers involved in the shooting.

The protest interrupted an otherwise ordinary city council meeting, with more than a dozen protesters demanding justice and transparency on the Jan. 4 fatal shooting of Faisal — a 20-year-old University of Massachusetts Boston student and Cambridge resident— by a Cambridge Police Department officer.

Led by Somerville resident Suhail P. Purkar, the protest was the latest in a series of demonstrations sparked by resident outrage at the killing, with gatherings at Cambridge City Hall on Jan. 9 and Harvard Square on Jan. 14.

“City Manager Huang, Mayor Siddiqui, it has been two weeks since our brother Faisal was murdered!” Purkar shouted from the audience, as the Council voted on a motion to conclude public comment. “We still do not know the names of the officers who murdered Faisal!”

The councilors immediately motioned to recess as protesters shouted from the rear of the chamber, with some demonstrators holding a large banner with a portrait of Faisal and the inscription “Justice for Faisal.”

As councilors rose from their seats and hurried to the exits, the protesters remained in the chamber and chanted “Release the names,” “No justice, no peace,” and “Send those killer cops to jail,” for several minutes.

CPD spokesperson Jeremy C. Warnick wrote in an emailed statement that no one was arrested in connection to the protest. In a Jan. 6 statement, Warnick wrote that it “would not be appropriate” to comment on specific allegations while the shooting remains under investigation by the Middlesex County District Attorney’s Office.

Siddiqui did not immediately respond to a request for comment.

On the afternoon of Jan. 4, police responded to a report of a man harming himself with a weapon. According to a CPD press release, officers asked the man, Faisal, to drop the weapon, and fired non-lethal sponge rounds when he allegedly advanced toward them. An officer shot and killed Faisal when he continued to approach, the press release said.

Purkar, an organizer with the Party for Socialism and Liberation, said in an interview that the protesters sought the release of the full, unredacted police report and the names of the officers involved in the killing, as well as their removal from the department.

The chants continued outside the chamber as protesters stormed Siddiqui’s office and pounded on her door, disrupting Siddiqui’s attempt to resume the meeting over Zoom and following through on their chant to shut down “business as usual.” 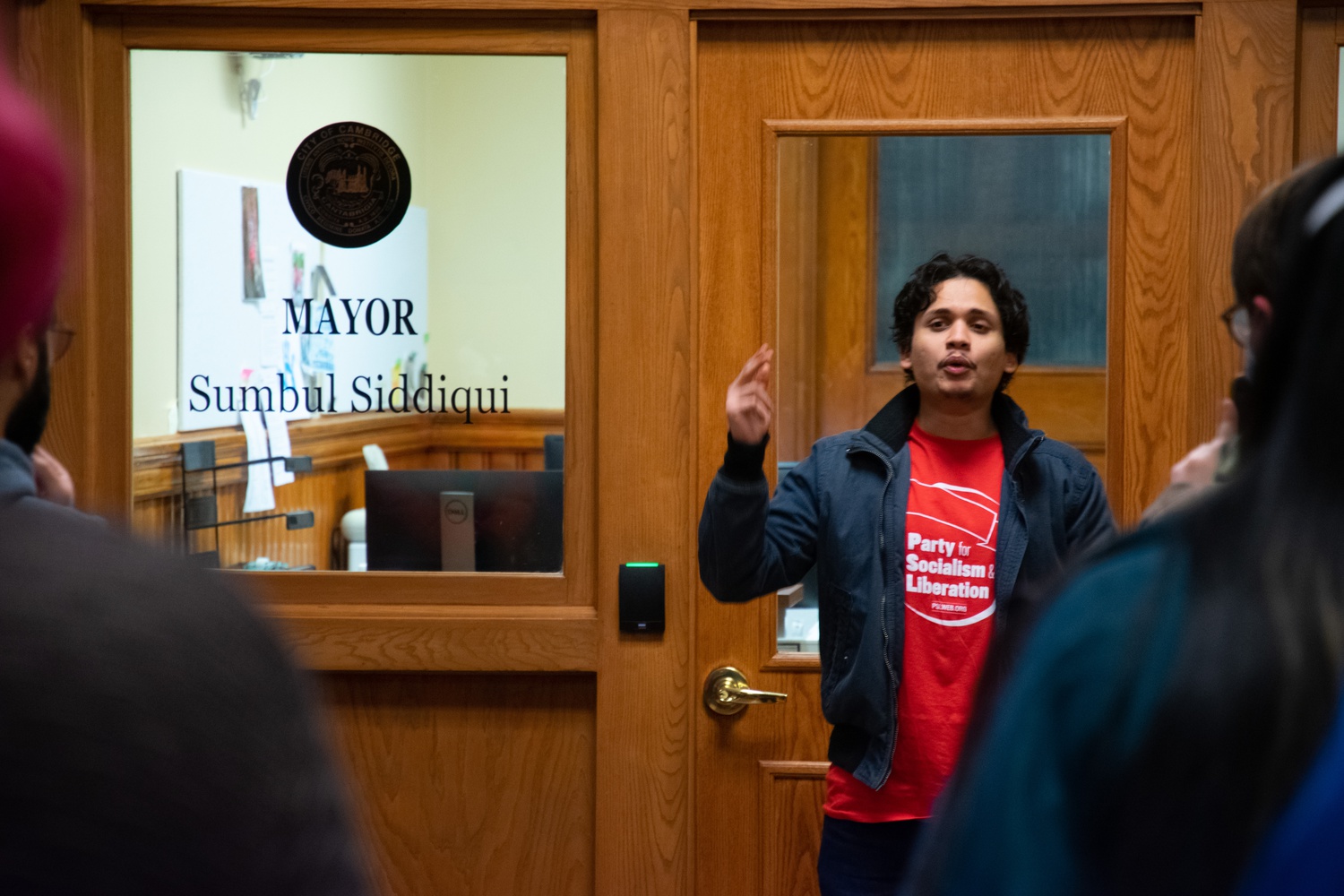 Suhail P. Purkar, an organizer of the protest, speaks to protesters in front of Mayor Siddiqui's office. Purkar interrupted the City Council meeting and led the group into her office when the meeting moved to Zoom. By Julian J. Giordano

As the meeting resumed at around 7 p.m., Councilor E. Denise Simmons asked if protesters were still in the building. Shouting could still be heard in the background of the Zoom webinar several minutes after business resumed.

“They want to kick the can down the road. They want to have a prolonged cover-up. They want to wait for the steam to dissipate from the movement,” Purkar added. “We refuse to do that.”

The Cambridge City Council will hold another special meeting on Wednesday in response to the police shooting of Faisal. Purkar said protesters would attend the special meeting, and would hold a march at Somerville High School on Sunday.

—Staff writer Samuel P. Goldston can be reached at samuel.goldston@thecrimson.com.

—Staff writer Jina H. Choe can be reached at jina.choe@thecrimson.com.