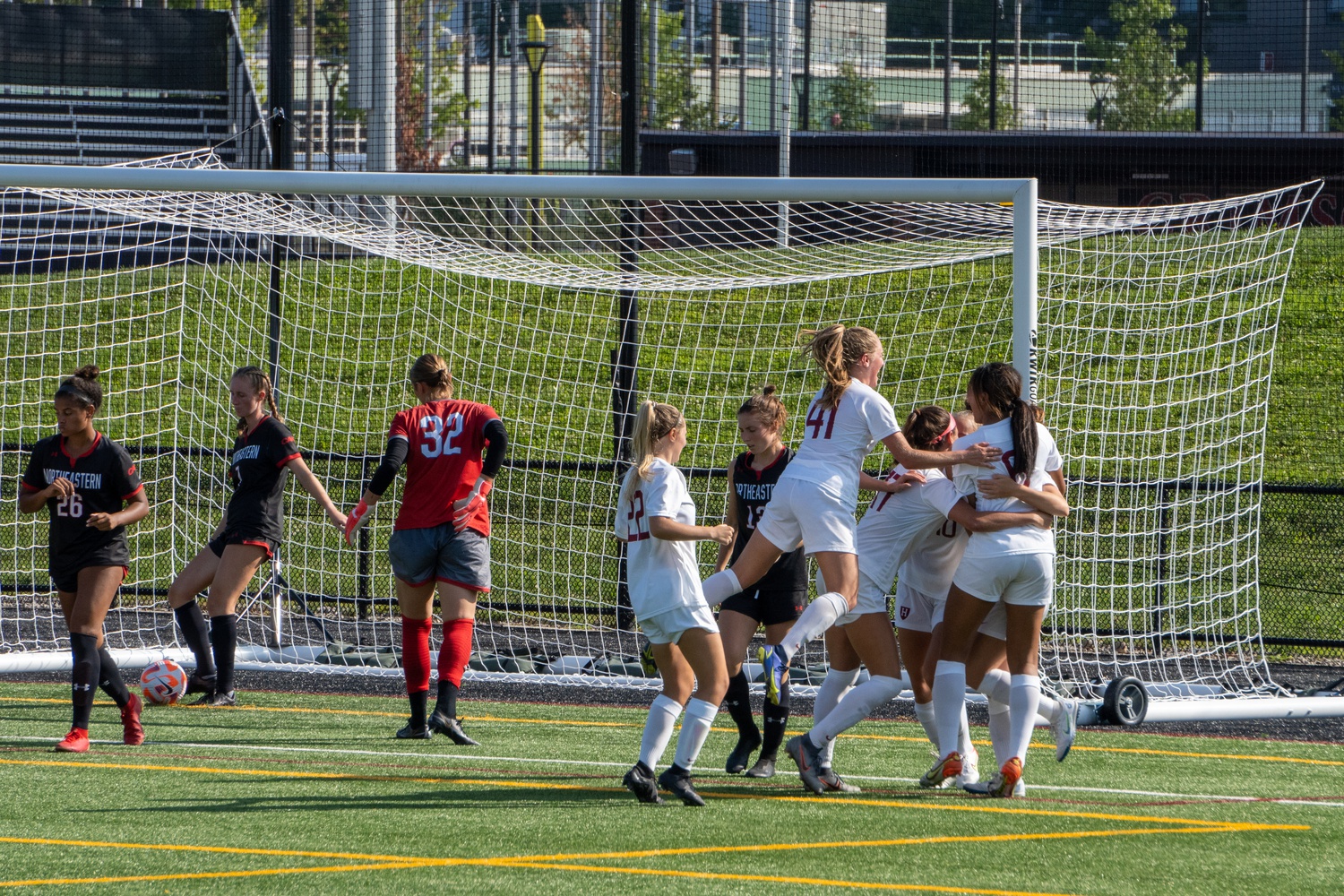 Harvard celebrates seconds after sophomore forward Ainsley Ahmadian scores a header off the corner kick from sophomore midfielder Aslaug Gunnlaugsdottir to put Harvard up 3-2 in the second half over Northeastern. Harvard would hold on to win its home opener 3-2. By Zadoc I. N. Gee
By Zing Gee, Crimson Staff Writer

“This season is going to be about us really just continuing to hit our highest possible standards, because I think when we do that, we’re going to be a difficult team to defend and play against,” said Harvard women’s soccer head coach Chris Hamblin, reflecting after the team’s season-opener win over Central Connecticut.

Harvard is back in action and there was no shortage of excitement in a successful week. It outshot Central Connecticut 18-2 en route to a dominant 3-0 victory on Friday, Aug. 26, in New Britain, Conn. and followed it up with a thrilling 3-2 comeback win over Northeastern in the home opener at Jordan Field three days later.

The Crimson (2-0-0, 0-0) entered the season ranked No. 2 in the Ivy League preseason media poll, trailing only the Brown Bears. Harvard starts this season with outstanding returning talent and incoming first-year players, who are poised to compete for a title following last season’s success – which saw it go 12-3-1 overall and 5-2 in conference play, earning an at-large bid to the NCAA Division I Tournament for the first time since 2004 in the process.

“The level of practice has been outstanding, the level of commitment to every activity, every video session,” said Hamblin, who later added that as sharp as his players have been, the team still has a long way to go. ”Every weight room session has been at a really, really high standard.” He also praised the team’s success in supporting and integrating the class of five first-years as they begin their time at Harvard.

This season, the Crimson will play an even more challenging non-conference schedule, with opportunities to compete at North Carolina State and Texas Christian University, both top-25 teams last year. NC State advanced to the second round of the NCAA Tournament, while TCU made it all the way to the third round, where the Horned Frogs fell to Rutgers in penalty kicks. 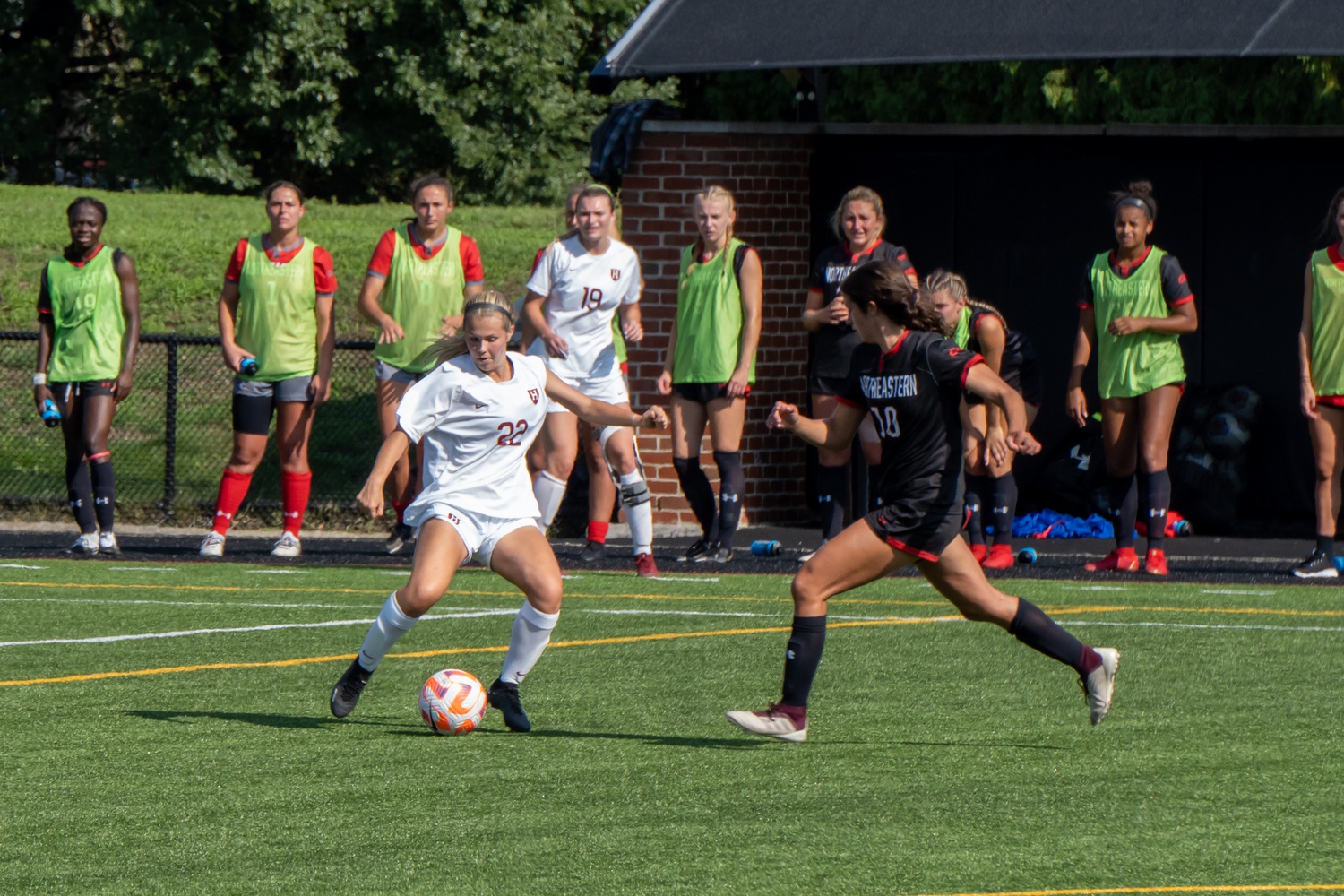 The Crimson went down early to the Huskies (1-2-1, 0-0) as Northeastern found the net in the seventh minute, but Harvard struck back in the 16th minute after senior midfielder Hannah Griffin fired a pass to sophomore midfielder Hannah Bebar, who then found senior forward Angela Caloia for the goal. The Crimson went up 2-1 after roles were reversed and Bebar scored off the assist from Caloia.

The Huskies scored the equalizer just before the first half ended, netting a tough shot that sailed above junior goalkeeper Anna Karpenko, despite the full-extension save attempt. Harvard replied with the eventual game-winner in the second half, as sophomore forward Ainsley Ahmadian headed in sophomore midfielder Áslaug Gunnlaugsdóttir’s corner kick to secure a thrilling victory. The game proved to be the first test of the season.

“I think there’s a lot of areas where we need to do better…and I think shining the light on those areas is going to help us now,” Hamblin said. “I think when you don’t play great, but you still find a way to win, that’s a really good sign of the resilience of the group. I don’t think anyone’s walking away from here thinking that we played really well.” 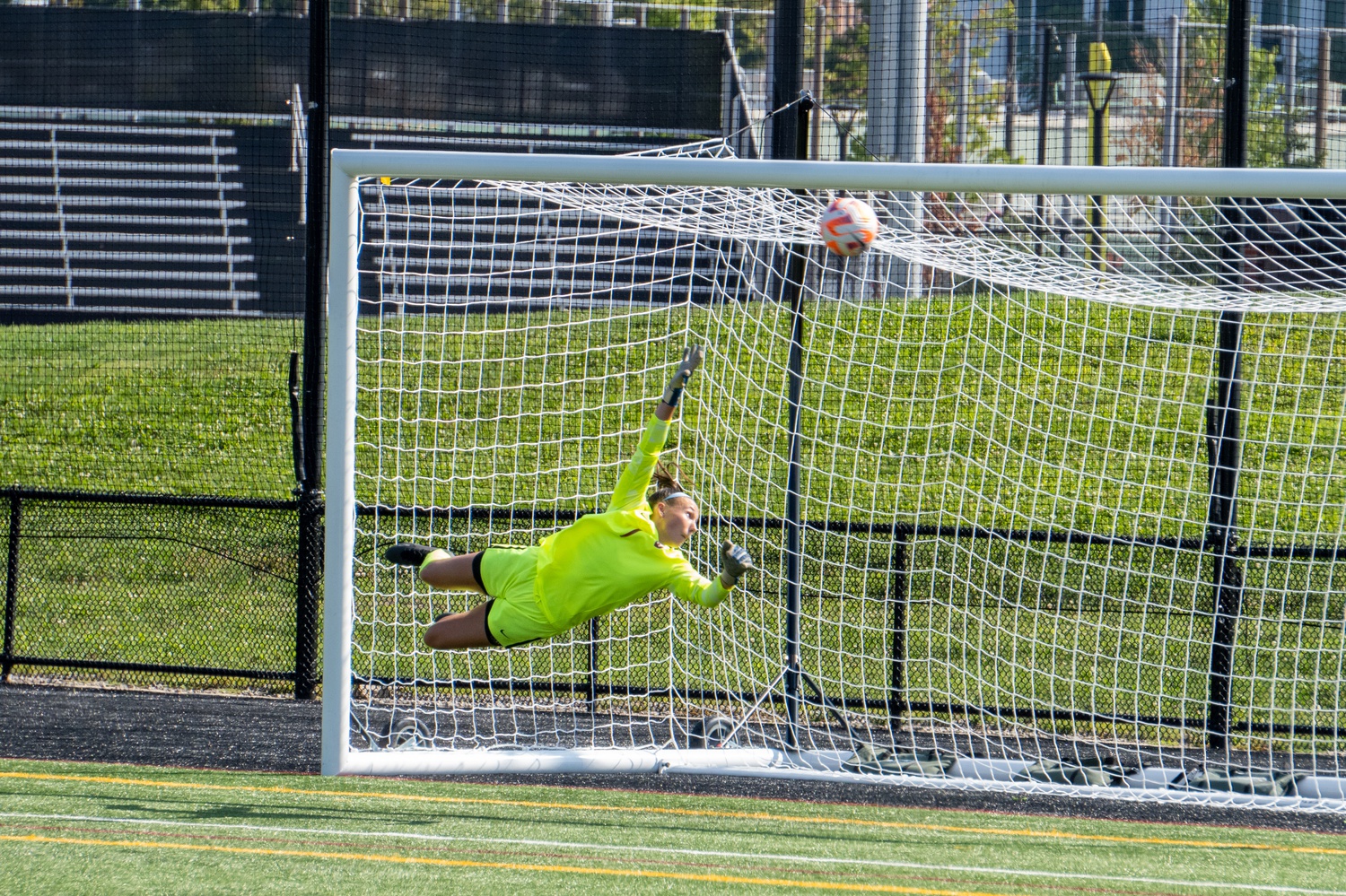 Junior goalkeeper Anna Karpenko makes a diving save attempt late in the first half, yet Northeastern finds the net to tie the game at 2-2. Karpenko answered with a key save in the second half to preserve the 3-2 lead, for a total of three saves on the game. By Zadoc I. N. Gee

While the team shone as a collective unit against the Blue Devils (1-2-0, 0-0), the spotlight was on sophomore center midfielder Josefine Hasbo, as she scored all three Crimson goals of the night—the first program hat-trick since Midge Purce ‘17 in 2015. The first came on a loose ball, while the second and third were assisted by first-year forward Audrey Francois and Bebar, respectively.

“She covers a ton of ground, and we’ve been working with her to try and get into the box more,” Hamblin said.“She showed up in the right spaces.”

“I think the key is our ability to work together and manage our energy…on and off the field,” said Hasbo, reflecting on the team’s preparation and drive, which has been key to its success so far.

Harvard’s success has not gone unnoticed away from Cambridge, either; three Crimson players have been called up to compete with their respective national teams during qualifiers for the 2023 FIFA Women’s World Cup, which will take place in Australia and New Zealand. Hasbo, Gunnlaugsdóttir, and sophomore defender Jade Rose will be competing for Denmark, Iceland, and Canada, respectively. 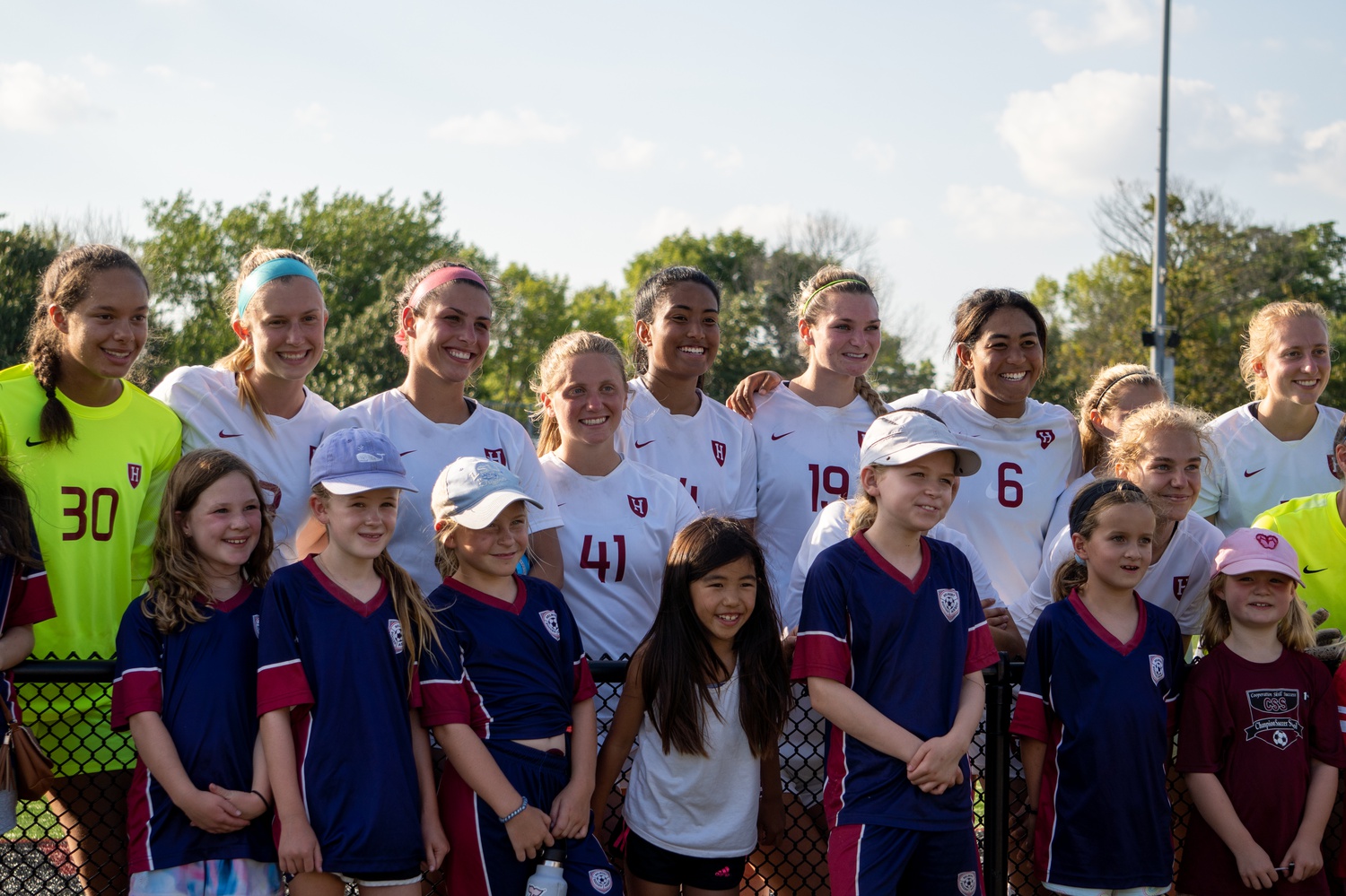 The Crimson poses for a photo after the game with a group of young fans from Belmont Soccer Association who stayed after to ask the team some questions. By Zadoc I. N. Gee

“[It’s] really an incredible, incredible opportunity [and] achievement for all of them,” Hamblin said. “That’s going to now give other people the chance to step up, which we’ve really excited about as well.”

“Overall, I think it’s just kind of this huge opportunity that I’m so happy the team has supported me in,” added Hasbo, who flew out the day after the Central Connecticut game, but will only miss two games.

Harvard hits the pitch again this Friday on the first part of its trip to North Carolina, squaring off against UNC Greensboro for its third game of the year. Two days later, on Sunday, it plays highly-anticipated opponent NC State. Against the Wolfpack, Harvard will surely earn a boost from the return of Hasbo, who will be back from Denmark after scoring in the Danish national team’s 5-1 FIFA World Cup Qualifiers win over Montenegro on Thursday.
- Staff writer Zing Gee can be reached at zing.gee@thecrimson.com. Follow him on Twitter @Zing401.