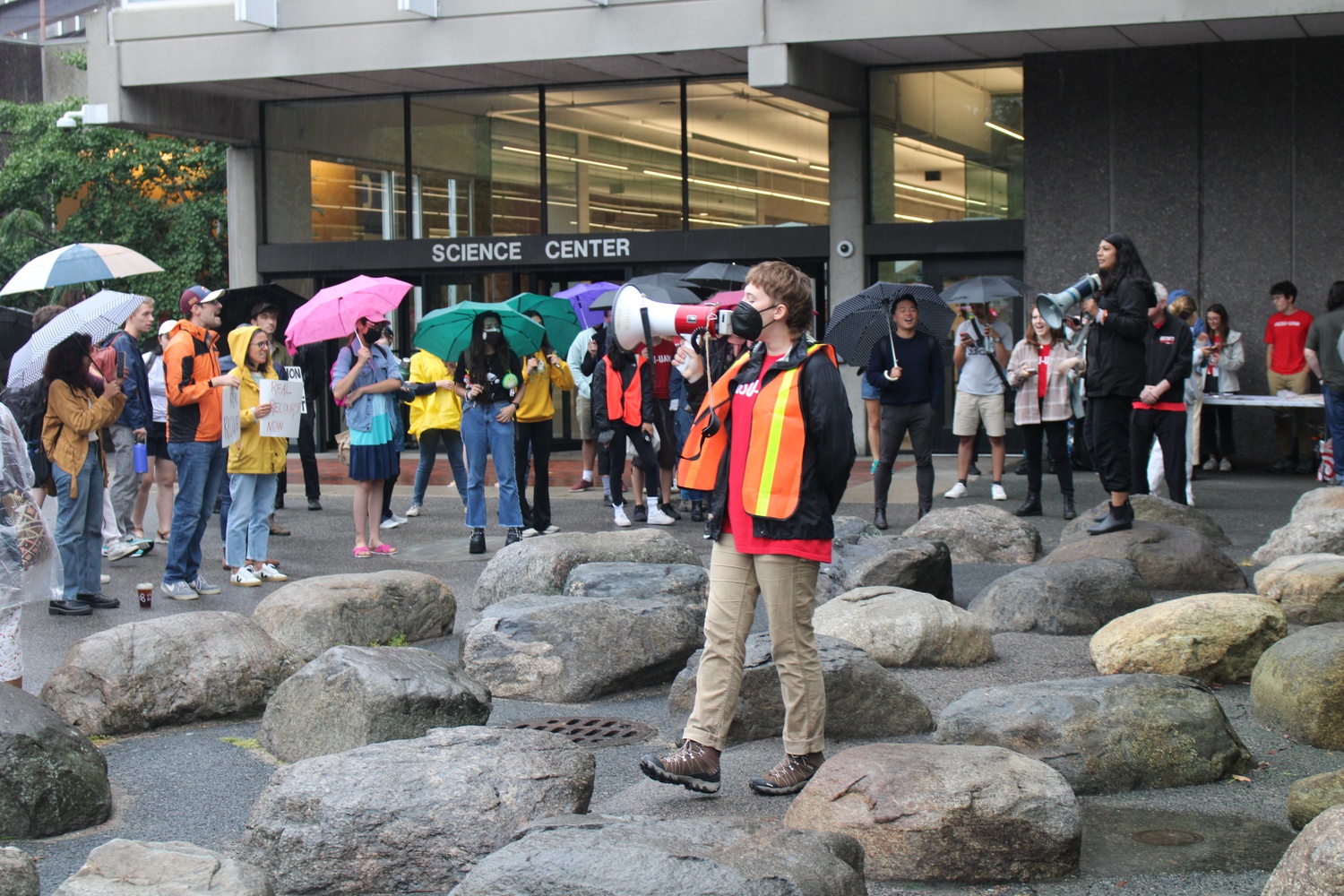 Members of Harvard's graduate student union walked out of class last week to rally for stronger protections against harassment and discrimination at the University. By Cory K. Gorczycki
By Sophia C. Scott and Claire Yuan, Crimson Staff Writers

The grievance denounced professor John L. Comaroff’s return to teaching this fall. Comaroff was placed on unpaid leave in January following a pair of University investigations, which found he had violated Harvard’s sexual harassment and professional conduct policies.

The complaint, filed on Aug. 8 by the Harvard Graduate Students Union-United Automobile Workers, alleged that by allowing Comaroff to teach, the University violated provisions outlined in Articles 7 and 10 of the HGSU-UAW contract, which require Harvard to protect affiliates from discrimination and remedy any harm.

“Comaroff’s presence in the classroom is an unnecessary threat to safety of women and queer students, including student workers who may work in the same buildings in which he teaches,” the grievance states.

Ljunggren said the University requested a private meeting after receiving the complaint, where administrators said the school wanted to bypass the typical grievance process steps, in which the union would meet with University stakeholders.

Harvard’s Office of Labor and Employee Relations wrote in an August response to the grievance that the union’s contract does not give HGSU-UAW jurisdiction over how the University decides to discipline faculty and staff.

“As the union should be aware, the contract between the University and the union explicitly retains for the University the exclusive right to make academic decisions, including but not limited to who is taught, what is taught, how it is taught and who does the teaching,” the letter reads.

The letter added that Harvard believes the complaint does not fall under matters that can be resolved through the contract’s grievance process.

“The union sought to change the Title IX policies and procedures during bargaining but ultimately agreed … that the University has the exclusive right to amend the policies and that student workers may not raise complaints regarding sexual and gender-based harassment through grievance and arbitration,” Harvard's letter reads.

“If the union nevertheless seeks to challenge the question of grievability and arbitrability, it may proceed directly to arbitration,” it adds.

But some union members have voiced concerns about the feasibility of the arbitration process.

“An arbitration can take many months to settle,” said Denish K. Jaswal, co-chair of the Contract Enforcement and Education Committee. “So by the time we got in front of an arbitrator, the class would have already been over.”

Ljunggren said the union’s goal is to protect all affiliates on campus from harassment and discrimination.

“Looking forward — while the grievance might be sort of dead in the water — I think what we’re really trying to do is make sure the campus is continuing to engage in the conversation around Title IX reform,” they said.

As of Sept. 14, no students are enrolled in Comaroff’s course, down from two when the course began, according to FAS class enrollment data.

Max G. Ehrenfreund, a sixth-year graduate student and a member of HGSU-UAW, said the responsibility of protecting affiliates should lie in Harvard’s hands.

“As to what happens next, I think that’s a question that administrators really need to answer,” he said.

“If they don’t answer it, the University will continue to suffer reputational damage, and the potential that Comaroff will continue to abuse the students will remain unaddressed,” Ehrenfreund continued.