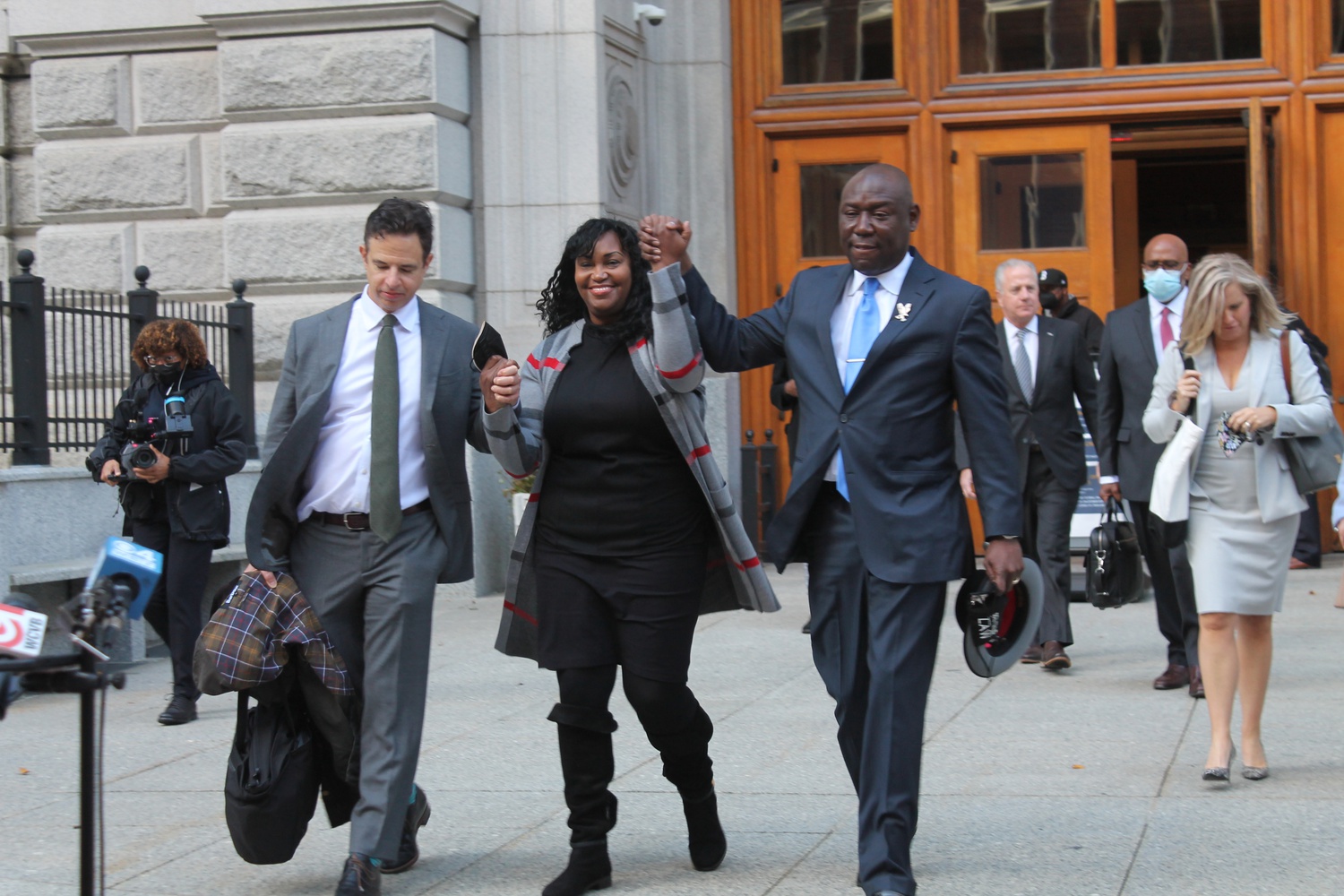 Attorneys Josh D. Koskoff, left, and Ben L. Crump, right, accompany Tamara K. Lanier on her way to a press conference after their hearing before the Massachusetts Supreme Judicial Court at the John Adams Courthouse in Boston in November 2021. By Raquel Coronell Uribe
By Isabella B. Cho and Brandon L. Kingdollar, Crimson Staff Writers

Massachusetts’ top court on Thursday partially revived a lawsuit filed by Tamara K. Lanier, who is suing Harvard over its possession of photographs she says depict her enslaved ancestors, ruling that Lanier has grounds to sue the school for emotional distress.

In the decision, the Court ruled that Lanier’s allegations are sufficient grounds to pursue her original claim that Harvard negligently inflicted emotional distress, as well as the more severe civil charge of “reckless infliction of emotional distress.” The suit was dismissed by the Superior Court in March 2021, and Lanier’s attorneys since sought a second opinion from the Supreme Judicial Court.

“We are gratified by the Massachusetts Supreme Court’s historic ruling in Tamara Lanier’s case against Harvard University for the horrible exploitation of her Black ancestors, as this ruling will give Ms. Lanier her day in court to advocate for the memory of Renty,” Lanier and her attorneys, Benjamin L. Crump and Joshua D. Koskoff, said in a joint statement Thursday.

Both Crump and Koskoff have litigated cases that have drawn national headlines. Crump has represented the families of Ahmaud Arbery, Breonna Taylor, George Floyd, and Henrietta Lacks, as well as residents of Flint, Michigan, who were affected by the contaminated water in the city.

Koskoff previously represented the families of the victims of the Sandy Hook Elementary mass shooting in their successful lawsuit against Remington Arms — the manufacturer of the AR-15 — and represents families exploring legal action against gunmakers who manufactured the weapons used in the Uvalde, Texas, and Buffalo, New York, mass shootings.

The Supreme Judicial Court’s decision does not, however, side with Lanier on all counts.

The justices affirmed the lower court’s dismissal of Lanier's claim that Harvard violated the Massachusetts Civil Rights Act, as well as her property claims to photographs which according to the lawsuit depict her great-great-great-grandfather, Renty, and his daughter, Delia.

The case has been remanded to the Superior Court, which will review Lanier’s emotional distress claims in light of the decision by Massachusetts’ highest court.

“Harvard was put on notice that she would reasonably be greatly concerned about how the images — created through coercion and depicting her ancestors in a degrading, dehumanizing light — would be used, displayed, and disseminated,” the Supreme Judicial Court wrote. “Because, as alleged, Harvard did just the opposite, its actions plausibly rose to the level of extreme and outrageous conduct.”

The lawsuit, brought against the University in 2019, surrounds Harvard’s possession of daguerreotypes which are believed to be among the oldest existing photographs of enslaved people. The photographs were commissioned by Harvard biologist Louis Agassiz for a research project based in polygenism — a racist pseudoscience that claims that some racial groups are genetically inferior — and are currently housed in the Peabody Museum of Archaeology and Ethnology.

A landmark report released in April by the Presidential Initiative on Harvard and the Legacy of Slavery stated that Agassiz conducted “abusive ‘research’” that was “rooted in racial hierarchies of the sort marshalled by proponents of slavery.”

“In light of Harvard's complicity in the horrific actions surrounding the creation of the daguerreotypes, once Lanier communicated her understanding that the daguerreotypes depicted her ancestors and provided supporting documentation, we discern in both existing social values and customs and appropriate social policy a duty on Harvard's part to take reasonable care in responding to her,” the Court wrote.

The decision cites Harvard’s failure to inform Lanier that a photograph of Renty would be used on the cover of a book published by the University and in materials for a March 2017 conference on universities’ ties to slavery, as well as a statement by then-Peabody spokesperson Pamela Gerardi to Lanier’s local paper denying her ancestral ties to Renty.

“She’s given us nothing that directly connects her ancestor to the person in our photograph,” Gerardi said in a 2014 statement to the Norwich Bulletin. “She claims she has more evidence, but we haven’t seen it.”

According to the suit, Lanier contacted former University President Drew G. Faust in 2011, asking the University to formally review documentation connecting her to Renty and Delia, including United States Census records. In a written response, Faust wrote that Peabody staff would “be in touch” with Lanier on developments related to the daguerreotypes, though the Court notes Harvard failed to do so.

University spokesperson Rachael Dane wrote in an email that the University is reviewing the decision, but declined to provide further comment.

The Supreme Judicial Court’s decision on the Lanier case comes three weeks after The Crimson published an article with details on a draft University report that stated Harvard holds the remains of 7,000 Native Americans and 19 individuals who were likely enslaved. The report acknowledged that the collections, held principally in the Peabody, represent “the University’s engagement and complicity” with slavery and colonialism.

The University’s April report from its Legacy of Slavery initiative provided historical research on Harvard’s entanglements with slavery and recommended the University take action to remedy the harm done.

“The damage caused by Harvard’s entanglements with slavery and its legacies warrant action,” the report reads. “Harvard should take responsibility for its past, and it should leverage its strengths in the pursuit of meaningful repair.”

In their joint statement Thursday, Lanier and her attorneys said they look forward to continuing the fight for Harvard to redress its treatment of Lanier and her ancestors.

“It is with great pride that we continue this legal and moral battle for justice against Harvard, as we look to repair the damage and degradation that they have caused Tamara Lanier, her ancestors, and all other people of color exploited by their institution,” they wrote.