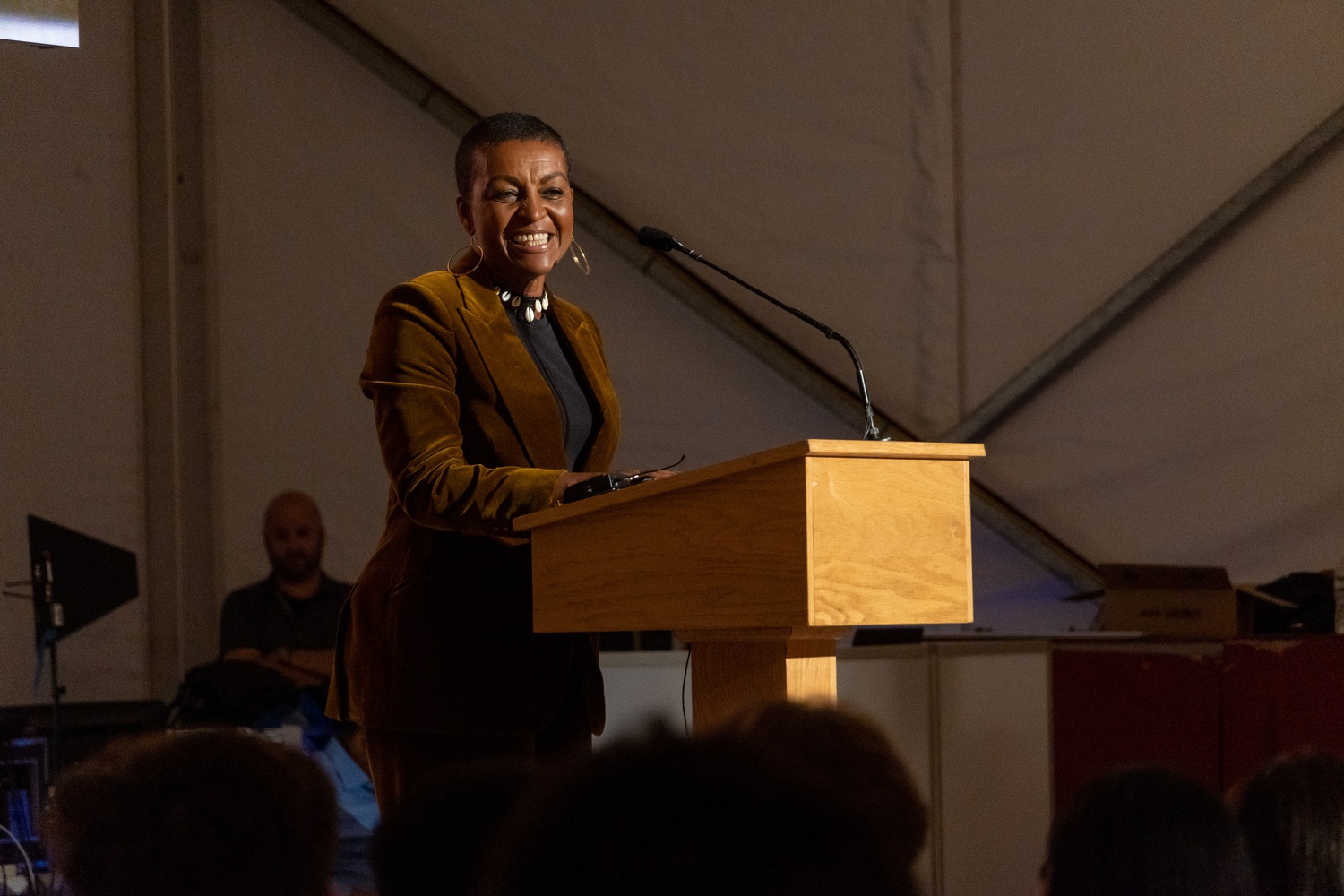 British actress Adjoa Andoh, known for playing Lady Danbury in the television series “Bridgerton,” called on members of the Harvard College Class of 2021 to leverage their “global reach” and “glory in the miracle of being alive” at an in-person Class Day dinner on Saturday.

The dinner comes one year after the Class of 2021’s virtual Class Day event, which featured professional basketball player Jeremy Lin ’10 as a keynote speaker.

In addition to her role in “Bridgerton,” Andoh starred in and co-directed the first Shakespeare play on a major British stage featuring all women of color, “Richard II.” She has also appeared in the sci-fi show “Doctor Who” and the medical television series “Casualty.”

During Saturday’s speech, Andoh said she was proud to address “Harvard’s first majority-minority class in its 380 year history.”

This milestone, she noted, came after Harvard published a landmark report detailing Harvard’s economic and pedagogical ties to slavery and pledged $100 million to educational support for marginalized groups, memorialization, communication with direct descendants, and more.

The current times are “groundbreaking times indeed,” she added, “worthy of reflection and perhaps a shift in the lens through which the story of Harvard will be received in the future.”

Andoh also acknowledged other recent moments of social change, including the Black Lives Matter movement, the Me Too movement, as well as the recent tragedy in Uvalde, Texas, where a deadly school shooting killed 19 students and two teachers. She called on the Class of 2021 to consider how they, as students of an “elite American institution,” will use their potential to enact global change.

“Your nation’s reach is global,” she said. “Your power to influence to uplift or throw down is unrivaled on the planet. And whether you are an American citizen or an overseas student, by studying at this elite American institution, Class of 2021, you are now active movers and shakers in the flow of that global reach and influence.”

“What will you do with your American reach and your Harvard glow?” she said.

Andoh reflected on the diversity displayed in “Bridgerton,” which featured numerous actors of color, and charged the Class of 2021 with “celebrating your differences.”

“No one was excluded from the ‘Bridgerton’ invitation at a time of isolation,” she said. “Everyone was welcomed in and more. It challenged our preconceptions about history, about who was there, who did what, who has a claim to be a part of what.”

She concluded by urging the class to find joy in themselves and in others. 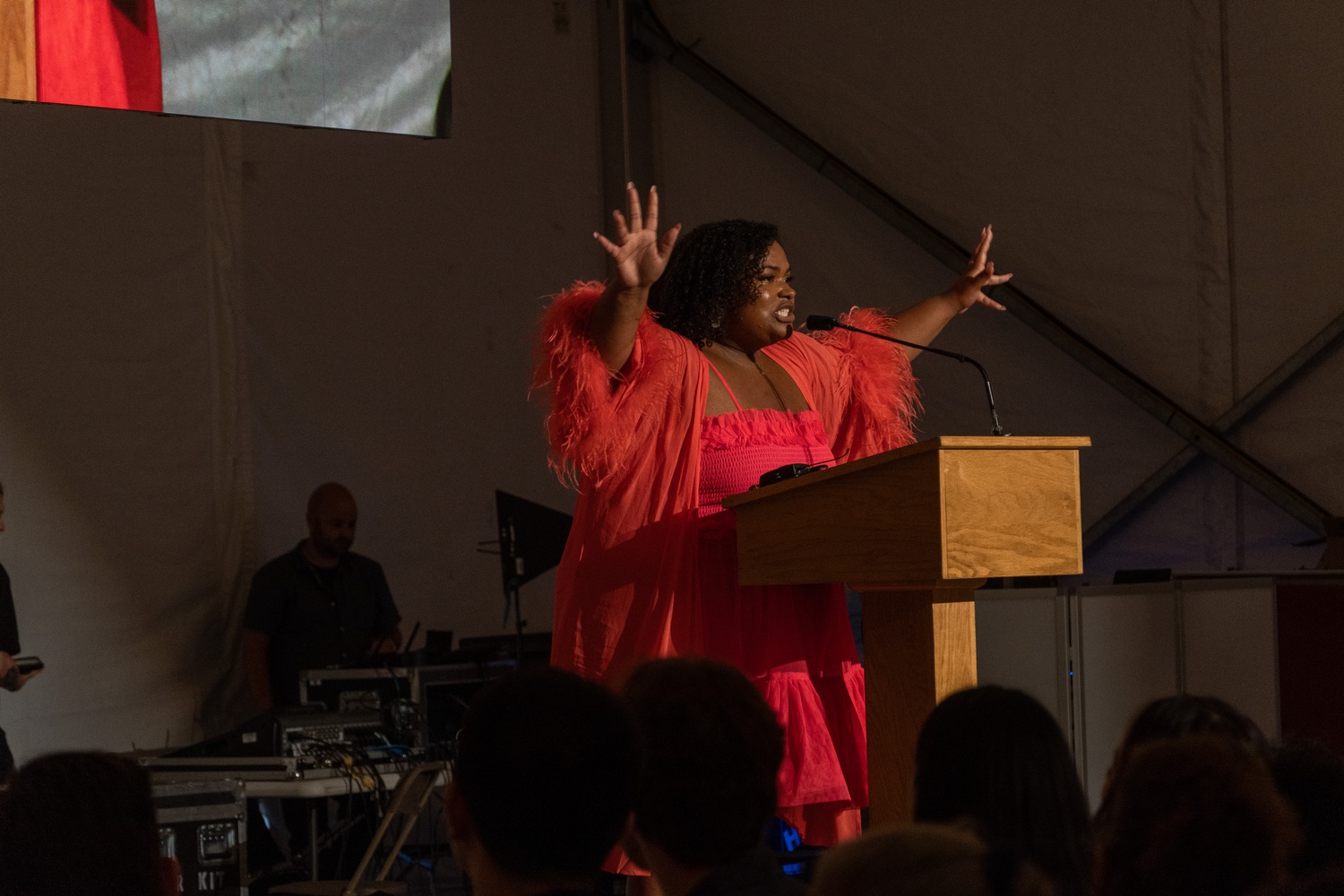 Cyrus N. Faruque ’21 and Yuke Zheng ’21 also spoke about their effort to gift Harvard’s first commemorative non-fungible tokens to the Class of 2021. NFTs are a digital asset that represent ownership over a real-world image or object.

Zheng said that within 24 hours of releasing the NFTs, one had already sold for $500.

“Who knows, maybe 40 years from now, we can all retire on these NFTs,” Zheng said. “This is a timeless asset. It can only go up.”

Mario O. Haskett Jr. ’21 concluded the evening with a rendition of the 2021 Class Ode.