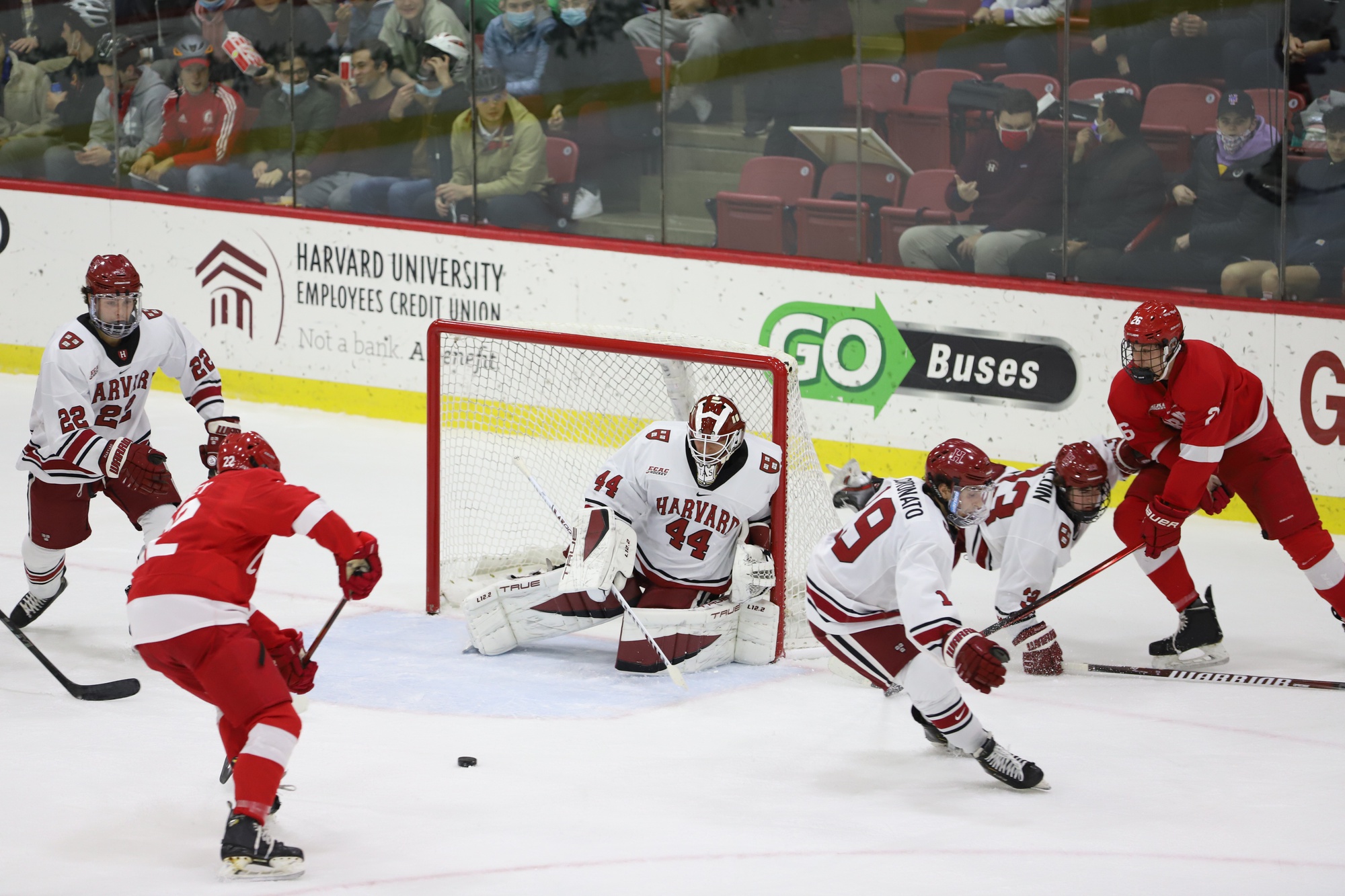 Stealing the Show: Mitchell Gibson and Matthew Coronato, Male Performance of the Year

By Bridget T. Sands
Harvard men's ice hockey faces off against Cornell in a nail-biter on Nov.5, 2021. Junior goalie Gibson made 36 saves, paving the way for the 3-2 win. By Owen A. Berger

There have been countless impressive performances by Harvard athletes over the past year. Prevented from participating in the 2021 season by the Ivy League due to Covid-19 protocols, many athletes took the year off from competition to train and practice — and the break paid off for many, as their respective dominant returns acted almost as vengeance for the time they had lost.

However, there was one competition — in which two players greatly contributed — that stood out among the rest. The Harvard men’s hockey team’s success continued to grow throughout the season and climaxed during the Eastern College Athletic Conference playoffs. The crown of the team’s success in the tournament was the championship game against No.6 Quinnipiac on March 19 that secured Harvard the conference title and propelled it to the NCAA tournament. Although the Crimson won as a team, its success in the game would have been impossible without junior goalkeeper Mitchell Gibson’s career-high 47 saves and freshman forward Matthew Coronato’s aggressive and tactical offense.

Prior in the tournament, Harvard had survived two win-or-go-home situations. It defended its home, the Bright-Landry Hockey Center, from Rensselaer Polytechnic Institute in a quarterfinal battle of a three-game series, with two of the contests going into overtime. The team then headed to Lake Placid, N.Y. to play at the historic Herb Brooks Arena for the remainder of the tournament, taking down No. 14 Clarkson University in the semifinals. The Crimson had previously lost to Clarkson twice earlier in the season, but defeated the Golden Knights when it mattered most.

“We basically knew that winning the ECAC was going to be our only way to keep playing,” Gibson said.

“We already had a tough series with RPI at home — we played the toughest opponents going into Lake Placid [the championship game], and I think that prepared us a little bit more than some of the other teams that maybe had it a little bit easier….We just took it game by game because we knew if we wanted to keep our season going we had to just to win out.”

Entering the championship, with about 4,500 fans in attendance, Harvard was a significant underdog to Quinnipiac. The Bobcats had a league-best 18 conference wins, and although the Crimson managed a split in the two regular season contests, in both previous games the hockey was physically aggressive, tensions were high, and offensive possession was heavily dominated by Quinnipiac.

Harvard started Gibson in goal, as it had consistently done in the latter half of the season. The junior from Phoenixville, Pa. was a brick wall, recording 47 saves on 49 shots against one of the best offenses in the country. One of the goals scored was during a power play in which Qunnipiac also pulled its goalkeeper for an extra skater, resulting in a 6-on-4 advantage. In comparison, the Crimson offense only produced 17 shots against the Bobcats, but scored three times. Gibson was challenged with more than double the amount of shots, but nevertheless stood strong behind the mask.

“I felt good going into it,” he said. “Towards the end of the playoffs, you play so much hockey that I think you start to figure yourself out…I hadn't played in over a year, so I felt like the first half of the season for me was slow — I wasn't feeling great. I was shaky in a few, and then towards the second half, I thought I was able to become more consistent and pull out some wins and plots and saves that I maybe shouldn't have.” 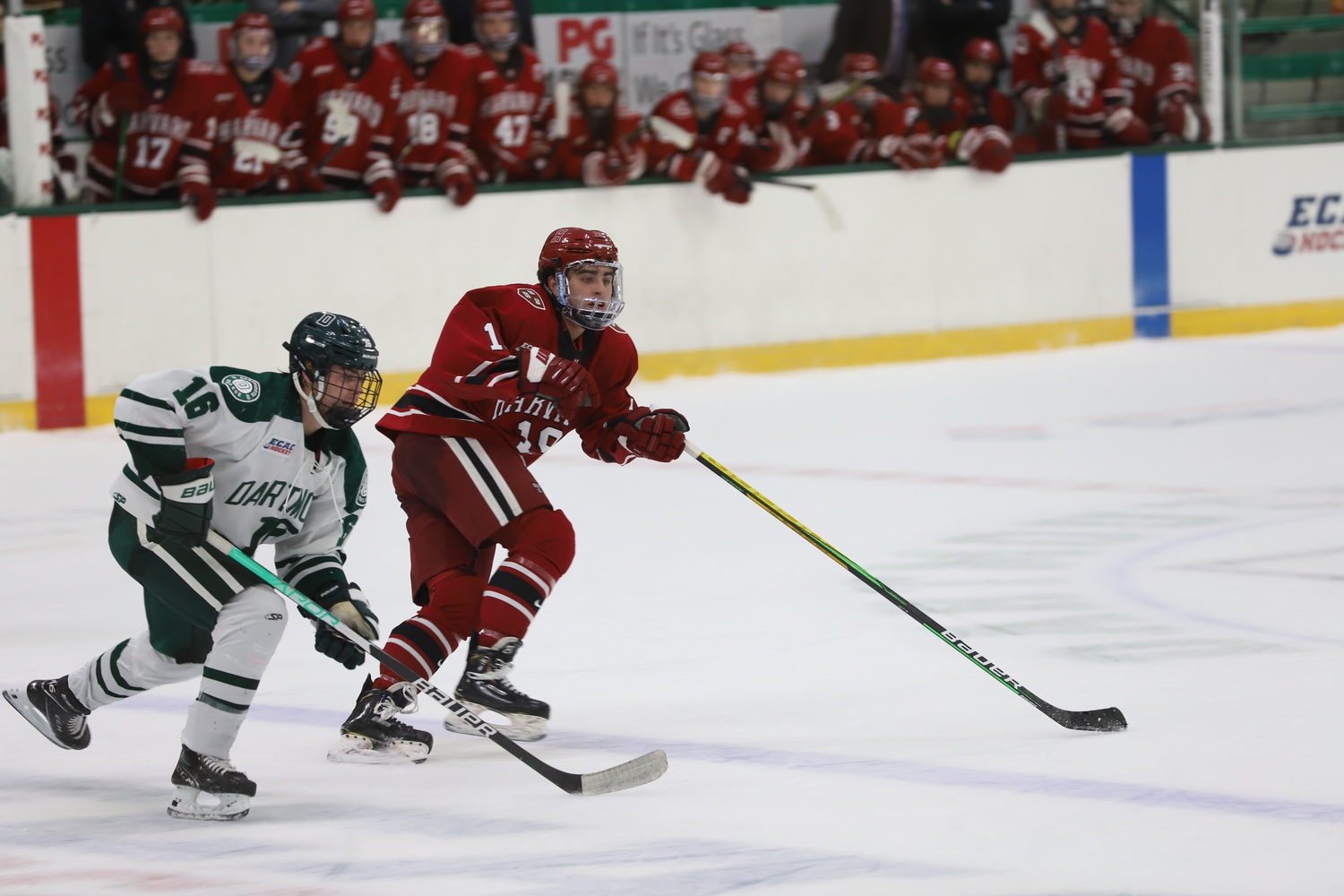 The Crimson plays Dartmouth on October 29, 2021 in Hanover, N.H. The 9-3 blowout featured 2 goals and 2 assists from first-year forward Matthew Coronato. By Owen A. Berger

Outside the crease, Coronato also played an outstanding game. Playing on perhaps the most talented offensive line of the team, alongside U.S. Olympians sophomore forward Sean Farrell and junior forward and captain Nick Abruzzese — now a professional hockey player for the Toronto Maple Leafs — Coronato saw significant time in the game, kept up with the physicality of the Bobcats, defended the zone, and produced offensive opportunities.

Coronato recorded his first point with a beautiful cross-ice assist to freshman defenseman Ian Moore on a power-play breakaway in the second period, putting Harvard up 2-1. The Crimson would lose the lead in the third period after the aforementioned 6-on-4 power play goal and headed into overtime.

Coronato only had one shot on goal during the game, but it would prove to be successful and the most important. Just over nine minutes into overtime, Moore found Coronato, who then lifted the puck into the top left corner of the net, ending the game and securing the Crimson the Whitelaw Cup for the first time since 2017.

“In between [the third period] and overtime, we just tried to regroup and settle down,” Coronato said. “[Moore] made a good drop pass to me in overtime. I tried to shoot it as quickly as I could — just get it off my stick. I had eyes and found the back of the net. It was just a really exciting moment for all of us … It was a well deserved win for our whole group.”

After losing last season to Covid-19, both players spoke on the importance of bringing the victory to their team as well as qualifying for the NCAA tournament.

“While a lot of other teams played, we had to sit on the sidelines for a full year and watch them, and I think that put a fire underneath us, so when we did have the opportunity, I think we all played exceptional and did well,” Gibson reflected. “We were all just happy to be at the rink and playing hockey again, and then to win [the ECAC championship] on top of that was unbelievable.”

“The number one goal for our team at the beginning of the year was to make it to [the NCAA tournament] and have a chance to compete for the national championship,” Coronato added. “I think that's everything for every team, and it was for ours. Having that experience this past year is huge for our team next year.”

Both Gibson and Coronato, prospects of the Washington Capitals and Calgary Flames, respectively, plan on returning next season to compete for Harvard. After the experience gained by their young team this year, they are anxiously awaiting to get back out on the ice to see what they can do next.

“I think we have a chance to be really, really good; we were really young this past year,” Coronato said. “Giving everyone a year to grow up, put some weight on, get stronger, just continue to mature — I think as this team continues to grow we have a chance to do really well, and we're all really excited for next year to see what we can do.”

—Staff writer Bridget T. Sands can be reached at bridget.sands@thecrimson.com.