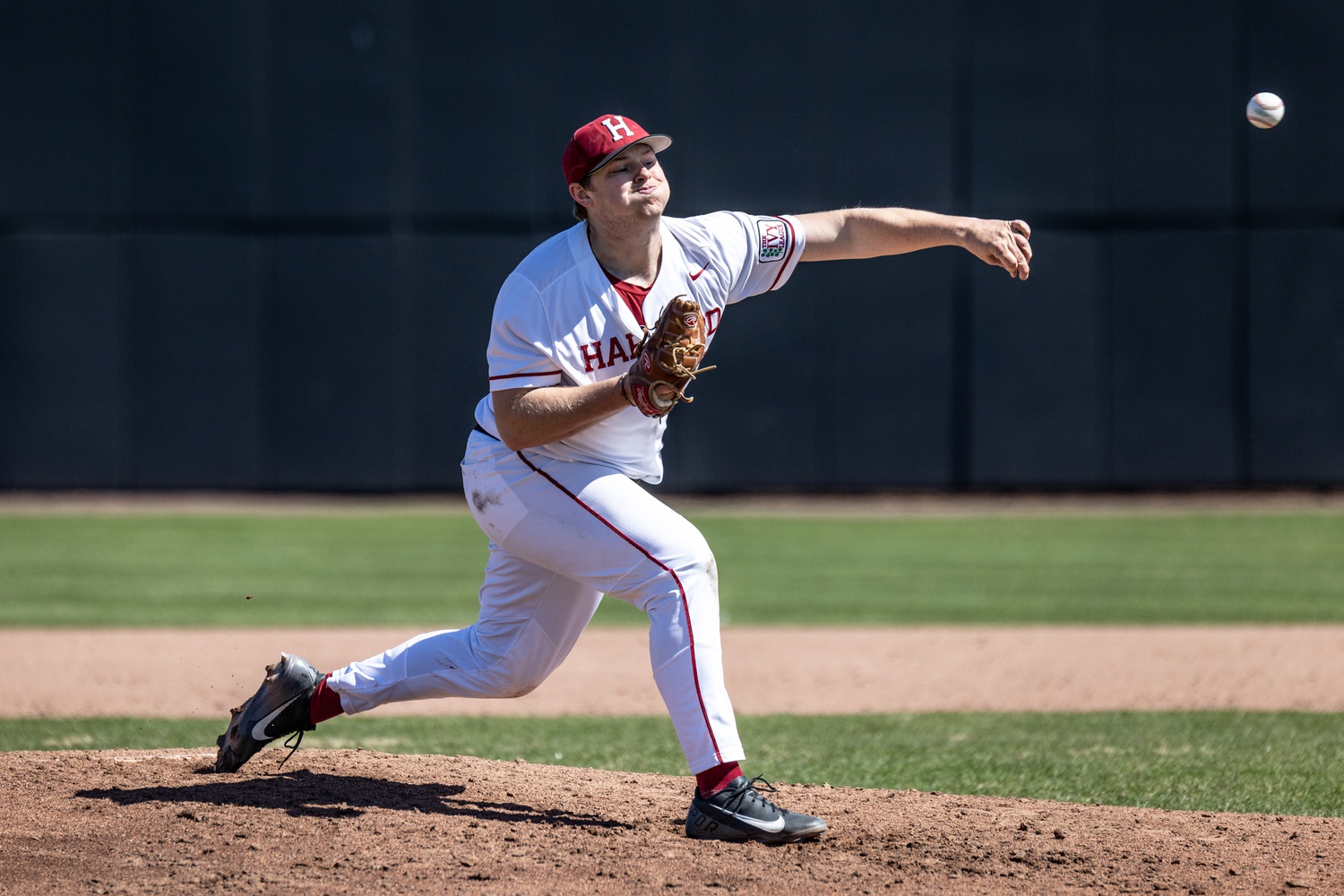 Junior starting pitcher Tim Williamson throws a pitch during the first game of Saturday's double-header. He struck out nine batters in five innings and allowed just one earned run, earning his fourth win of the season. By Dylan J. Goodman
By Jack Silvers, Contributing Writer

The last time that the Harvard baseball team stepped on to O’Donnell Field to play a game of consequence was May 18, 2019 in a 3-1 win against Columbia. That changed this past Saturday, when the Crimson returned to its home stomping grounds for a resounding 17-7 win against Brown. That game kicked off a three-game weekend series against the Bears in which Harvard took the second game of the series 7-1 before falling in the matinee by a score of 7-5.

“We’re headed in the right direction,” said sophomore outfielder Ben Rounds. “That was the first regular season home game for three classes, so it was really good to just get out there and get a couple W’s.”

The Crimson (13-10, 5-1 Ivy League) tallied the series win over Brown (6-14, 2-4 Ivy League) after starting the season on an 18-game road trip that included stints in Florida, California, Texas, and New York. By taking two of three, Harvard won its second series in a row, after sweeping Cornell decisively the previous weekend. In between the Cornell and Brown series, the Crimson dropped a game against Holy Cross 11-5 in Worcester last Tuesday, March 29.

Against the Bears, the team was propelled by strong hitting up and down the line-up but especially from the top of the order, led by first-year second baseman George Cooper, Rounds, sophomore outfielder Chris Snopek, and junior first baseman Logan Bravo. Junior starting pitchers Tim Williamson and Adam Stone picked up the wins in the first two games of the series, while first-year righty Sean Matson took the loss in the final game of the series.

Playing in its first home game in 1,049 days, the Crimson lineup looked right at home from the outset of the first game on Saturday, posting an 11-run inning in the bottom of the first which all but put the game out of reach for the Bears.

Rounds, hitting in the two-spot, acted as the spark plug in that monumental inning with a double to left field that was followed by four consecutive hits by Snopek, Bravo, sophomore shortstop Jake Berger, and sophomore third baseman Will Jacobsen. By the end of the frame, Cooper and Snopek had each driven in two runs with RBI triples and the Crimson had forced Brown’s starting pitcher Bobby Olson out of the game after just two-thirds of an inning. 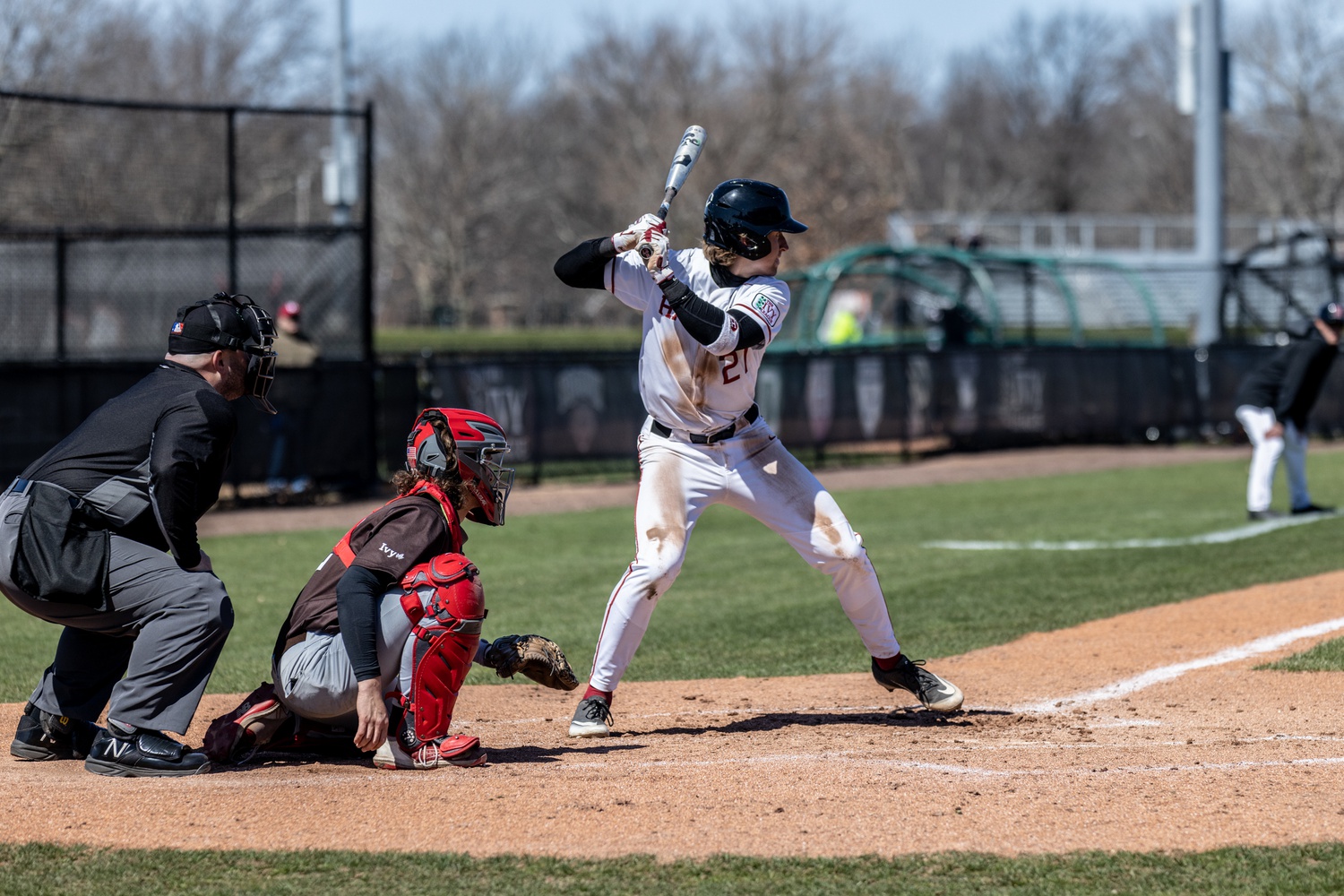 “A couple guys got us started and we just started feeding off the energy,” Rounds said, reflecting on the masterclass in momentum hitting during the first inning “Everyone was excited to be there and then just kept piling off the momentum that we had.” The outfielder also gave credit to the parents and classmates who populated the stands for motivating the team over the weekend.

The Bears managed to scavenge two runs across Williamson’s five innings, one of which scored on a strikeout and passed ball allowed by junior catcher Zach Brown. The right-hander left the game after the top of the fifth having allowed two runs, one earned, and striking out nine. His strong start represented a bounceback from his last outing against Cornell, in which he allowed five earned runs across four and a third innings.

The Crimson tacked on an additional run in both the second and third innings, after which both teams cooled down and pitched a scoreless fourth and fifth. In the sixth, the Bears managed to score four runs against junior relief pitcher Ian Buckner on the strength of three hits, a pair of walks, a hit-by-pitch, and a throwing error by Berger.

Harvard added three insurance runs in the top of the eighth, with Rounds, Bravo, and Jacobsen all continuing their hot hitting on the day. First-year righty and Massachusetts native Tanner Smith earned the save, his first of the year, with three scoreless innings to end the game for the Crimson.

In the second game of the Saturday doubleheader, the Crimson got off to a slower start offensively, posting just one run on three hits through the first five innings of the game against Brown starter Tobey McDonough. That run came on an RBI single by first-year designated hitter Peter Levin that drove in Berger, who reached base on an infield single and throwing error.

The team’s sluggish start at the plate was excused because starter Adam Stone twirled a gem, allowing just two hits and one run over six innings, striking out six batters in the process. Finally, in the bottom of the sixth inning, Harvard drove McDonough out of the game with a familiar pattern of hitting from the top of the lineup: Rounds singled to start the inning and was driven home by a double to right-center from Bravo, who then scored on an RBI single by Berger.

With the momentum on its side, the Crimson added another run in the seventh and three more runs in the eighth, which were charged to McDonough and Bears’ relief pitcher Paxton Meyers. Having trailed for virtually the entire game, Brown was unable to muster any offense off of sophomore relief pitcher Chris Clark, who earned the save with three innings of two-hit ball.

The final game of the series, which kicked off at mid-morning on Sunday, was a tight contest that ultimately went Brown’s way behind a five-run seventh inning from the Bears. For the third straight contest, Harvard received a strong starting pitching effort, this time from senior right-handed starter Jaren Zinn, who missed his sophomore season in 2019 and therefore saw his first home action since spring 2018.

Zinn managed to keep the Bears lineup mostly quiet through the first six frames, allowing one run to score on a double-steal in the second and another on an RBI double from the Bears’ third baseman, Charles Crawford, in the fourth. On the offensive side, Harvard benefitted early from two defensive miscues by the Bears, scoring on a wild pitch in the second and then a throwing error by the right fielder in the third.

The game began to unravel for the Crimson in the top of the seventh, with Sean Matson on the mound. Two singles and a walk to begin the frame created a bases-loaded, one-out situation for Brown designated hitter Ray Suss, who delivered by singling to left, driving in two. The next two batters, first baseman Ryan Marra and center fielder Deri Morphew, doubled and singled, respectively, giving Brown a 7-2 lead before Matson was able to escape the inning with a clutch strikeout.

The Crimson mounted a valiant comeback attempt in the bottom of the inning, sparked by Rounds, Bravo, and Berger, but the effort was snuffed out when Berger was thrown out attempting to advance to third on a two-out single by Jacobsen. Down 7-5 at the end of the seventh, Harvard wouldn’t score another run for the rest of the game off of Brown relief pitcher Jack Seppings.

Even with the disappointing end to the series, Harvard’s hitters had an impressive three-game showing to build off of their offensively strong road trip. Rounds hit 8-14 over the three games, while Snopek was 6-11, Bravo was 6-13, and Berger was 6-12. Bravo extended his hitting streak to 12 games, while Berger and Rounds extended their streak of games where they reached base safely to 18 and 14, respectively. All have had hot starts to the season and will look to continue their success this weekend at home against Penn (17-8, 4-2 Ivy League), the top team right now in the conference.

“I think that it’s going to be a challenge, but we’re excited to compete against them, to play against that type of competition and just see how we stack up,” Rounds said, looking ahead to the Penn series. The first game of the series will kick off this Saturday, April 9 at 11:30am at O’Donnell.