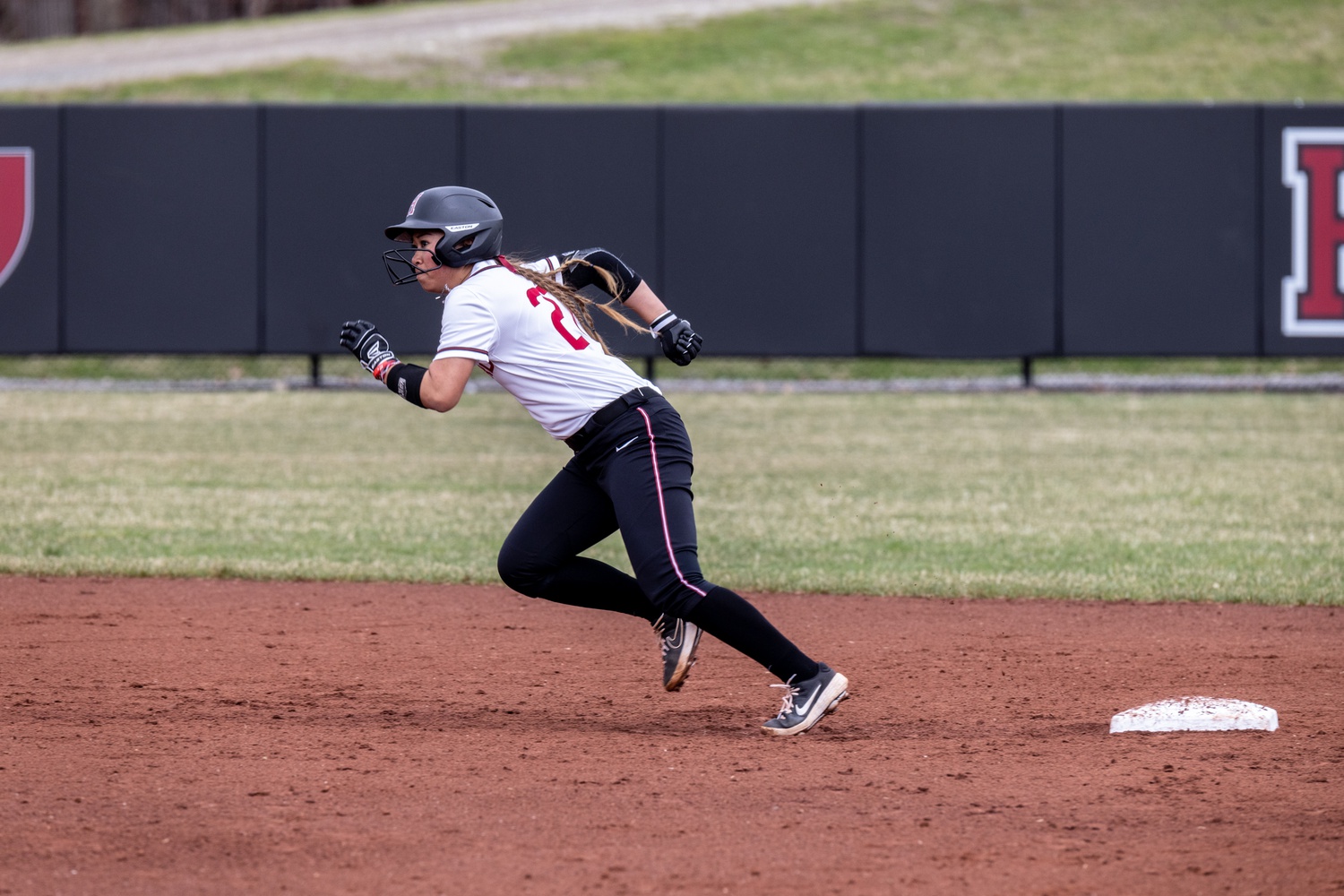 Junior infielder/outfielder Trina Hoang races out of the box during an 8-2 victory over Penn on April 9, 2022. This past weekend, Hoang helped the Crimson to a 2-1 series victory over Brown that kept it in contention for a conference title. By Dylan J. Goodman
By Hannah Bebar, Contributing Writer

Harvard softball left Providence, R.I., with a pair of wins under its belt after a three-game clash against Brown this past weekend. The Crimson traveled south to face the Bears after a Covid-19 outbreak resulted in a cancellation of its Cornell series the previous weekend.

Standout senior infielder Morgan Melito reflected on the importance of getting back on track after the outbreak as the team gears up for the homestretch of its season.

“We are definitely coming off of a lull in our momentum that we have been gaining throughout the season,” she said. “This weekend was all about rebuilding and getting back to a better spot.”

The Crimson went into Saturday with a 10-3 record in Ivy play, with the top two schools in the conference clinching postseason berths. The first game of the series, although low scoring – 2-1 in favor of Harvard – was high in action. Junior catcher Allison Heffley singled to shortstop in the fourth and was brought in by a sophomore infielder Molly Dickerson walk to score the game’s first run. However, the Bears would rally in the fifth, as Laurel Moody hit a solo home run. It would be Brown’s only run of the game; sophomore Anna Reed pitched well and halted any momentum the Bears garnered. Harvard would go on to score in the top of the sixth and held on for the 2-1 victory.

In the second game of the series, Brown’s pitchers posed more of a challenge, as the Bears ultimately edged out the Crimson, 1-0. Harvard managed to out-hit Brown, 8-4, but could not capitalize on its scoring chances.

The Crimson reset, rested, and returned for the third and final game of the series on Sunday. First-year Katie Arrambide stepped up to keep Brown scoreless beyond the third inning, allowing Harvard to rally from a 3-0 deficit. The Crimson showed heart and persevered to claim a 4-3 victory in eight innings.

Melito did not hesitate to praise her teammates and emphasized the impact of teamwork on Sunday’s victory.

Yet it was the senior from Westlake Village, Calif. and former Ivy League Player of the Week recipient herself who struck the fatal blow, coming through with a game-winning solo home run in the top of the eighth.

“Going into Sunday, I was really focusing on simplifying my hitting mechanics, and really seeing the ball in,” Melito reflected.

Coming off of a difficult Saturday of play, her home run put the Crimson in good position coming into the final weeks of Ivy play. Head coach Jenny Allard praised her team for overcoming hardships not only this season, but throughout the pandemic.

“I am very proud of how hard the team has worked to come together this year after our prolonged shut down. We have had different players step up at various times and that is the mark of a great team,” she commented.

Harvard approaches the end of Ivy league play in contention for its third straight conference title and tenth overall. It heads to Dartmouth this weekend for a three-game series, and if it comes out victorious, it is guaranteed at least a share of the Ivy League championship with Princeton. Yet, depending on how other results shake out across the league, given cancellations, the Crimson could still stand atop the conference alone.