Harvard Baseball Continues Slide Against Columbia, Gets Swept in NY 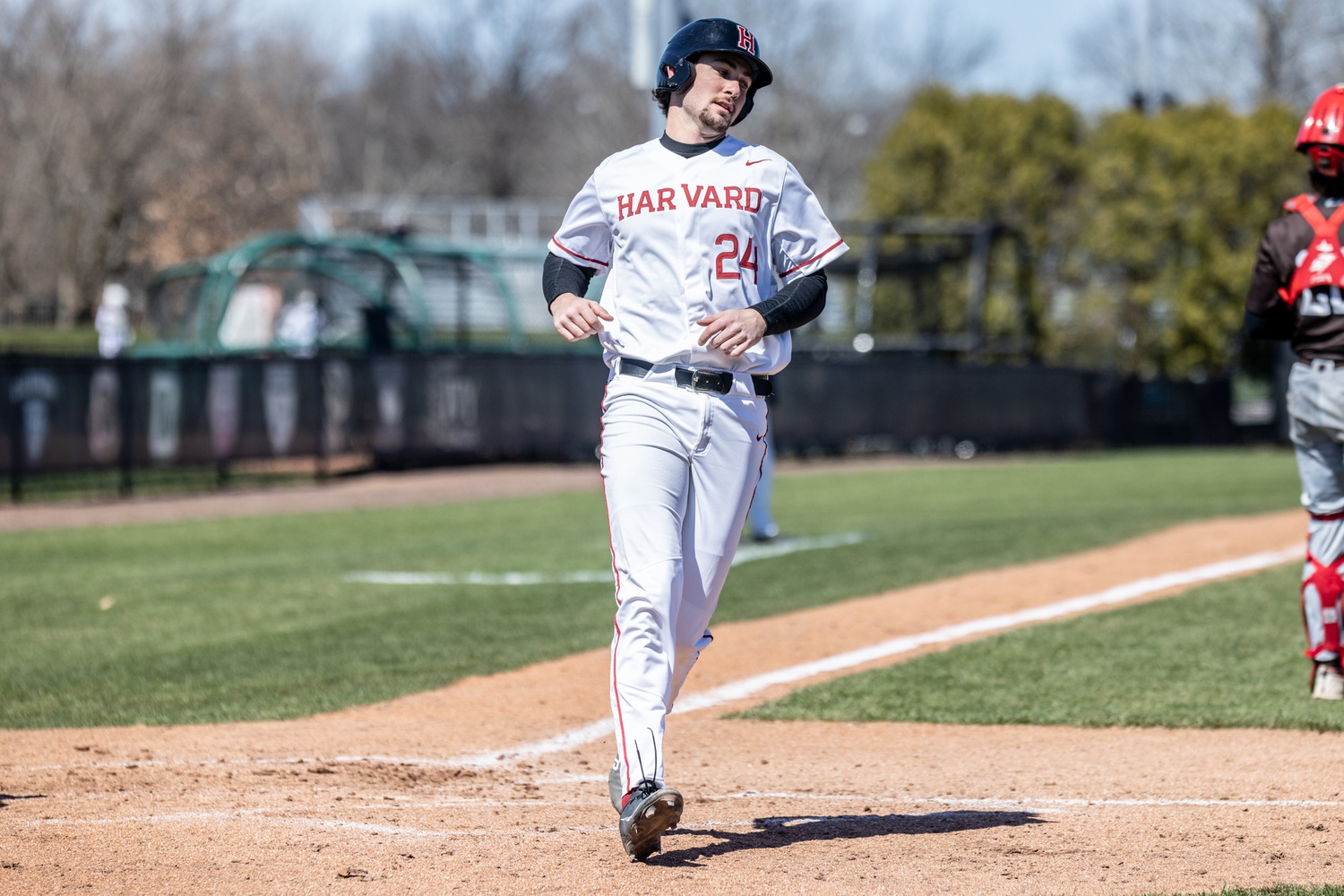 Junior catcher Zach Brown rounds the bases in a contest at home earlier this April. The Crimson won the series 2-1. By Dylan J. Goodman
By Jack Silvers, Contributing Writer

The Harvard baseball team had scored double-digit runs on four separate occasions going into the weekend of April 16-17, earning a victory each time. That came to an end on Saturday, April 16, when the Crimson fell 21-12 to Columbia in a shootout which kicked off a three-game sweep for the Lions. The Crimson extended their losing streak to a season-high eight games.

“We were expecting them to be a good team and they certainly were,” said junior outfielder Hunter Baldwin. “It was a tough series.”

Harvard (14-16, 5-6 Ivy League) followed up the high-scoring loss by losing the second game of Saturday’s doubleheader 9-4 and then dropping the matinee on Sunday 7-3. With the three victories, the Lions (19-13, 10-2 Ivy League) extended their winning streak to an impressive 11 games and improved their conference record to the best in the Ivy League.

The team traveled to New York for the series after an eight-game homestand which included a series win against Brown, a sweep at the hands of Penn, and losses to Northeastern and UMass sprinkled in between. On April 1, the Crimson sat at a record of 11-8 and looked to be one of the teams to beat in the Ivy League. Now, the squad is staring at the wrong side of .500 and looking to rediscover its mojo.

The wind was blowing out toward the outfield at Robertson Field on Saturday, and both offenses reaped the rewards — the Lions were able to build a lead that proved insurmountable. Together, the teams combined to hit seven big flys. As Baldwin put it, “If you put the bat on the ball, it was gonna go.”

Senior starter Jaren Zinn, who had been a reliable innings eater for the Crimson in his previous two starts, was knocked around in the first inning by the Lions to the tune of seven runs. The righty didn’t help himself by committing a throwing error midway through the inning which led three of the runs to be unearned. Zinn came back out for the 2nd inning but was pulled after ceding three more runs; he finished with a stat line of twelve runs (nine earned) and four walks in an uncharacteristically wild outing.

For the next five innings, the mound was mainly manned by first-year righty Tanner Smith, who allowed six earned runs to the Lions before turning the ball over to junior James Fitzpatrick, who finished the bottom of the sixth after allowing four more Lions to score. Only junior righty Pryor Thomas had any success keeping the Columbia bats quiet on the day, and quiet did he keep them: Thomas pitched a perfect eighth and ninth, striking out three in the process.

On the day, the team struggled to play clean baseball on the defensive side, with the pitching staff combining to throw five wild pitches and Zinn’s throwing error being matched by errors from first-year second baseman George Cooper and sophomore shortstop Jake Berger.

Offensively, the team gained easy traction against the Lions pitchers. Juniors Logan Bravo and Will Jacobsen, who play first base and third base respectively, and sophomore outfielder Peter Messervy all hit home runs and had multiple hits on the day. The bats were able to trim an eleven-run deficit to pull within shouting distance in the fifth, when the score was 15-10, but they ultimately fell short of the Sisyphean task of catching up to a Columbia offense that delivered blow after blow.

The second game of the doubleheader lacked the roaring winds or crooked score lines of the first game, but the result was the same in the end, as first-year Lions starter Joe Sheets was able to completely shut down the Crimson line-up for the first seven innings of the game. Harvard rolled out junior righty Tim Williamson, the second man in the three-headed rotation, who pitched three and a third solid innings but was outshone by Sheets.

Columbia showed remarkable consistency between the first and second game: just as they did in the series opener, the Lions hit four home runs off Crimson pitchers and benefitted from three errors by the opposing team in the field. They wasted no time, with left fielder Cole Hage and designated hitter Andy Blake hitting back-to-back blasts to open the bottom of the first inning.

From then on, the Lions never looked back. As Sheets cruised through the Crimson line-up, sprinkling six hits and seven K’s across his seven frames, the Columbia line-up continued to tack on runs so that the score was 9-0 before the Crimson was even on the board. In one particularly frustrating sequence for the Crimson, Columbia shortstop Jacob Phelps came all the way around to score from first on three consecutive wild pitches from first-year righty Sean Matson.

Once Sheets left the game, the Crimson immediately capitalized against the Lions bullpen. Berger and junior catcher Zach Brown both hit two-run homers off reliever Derek Yoo, giving the Crimson some life in the top of the 8th. However, Yoo settled in to get the final out of the eighth and then pitched a scoreless ninth, putting the Lions in prime position to sweep.

In addition to playing lackluster defense and pitchers missing their spots, the Crimson line-up was unable to capitalize on the few opportunities it garnered against Sheets: the squad was 1-3 with runners in scoring position and grounded into an inning-killing double play in the sixth. A bright spot was Messervy, who continued to rake with another two hits in the game.

The series finale had a familiar feel to it: the Lions lept out to an early lead that was preserved through strong starting pitching, and a late Crimson rally fell short. This time, the Lions got it done against the Crimson without putting on a power display, relying on clutch hitting and another string of defensive missteps by Harvard to scrape through with a win.

This time, it was lefty JD Ogden who mowed down the Crimson line-up over the first five and two-thirds innings, holding Harvard to just a sacrifice-fly in the first by sophomore outfielder Chris Snopek that gave the Crimson its first lead of the series. The advantage was short-lived, as the Lions put up two runs in the bottom of the frame via a throwing error by first-year catcher Sawyer Feller and an RBI double by Lions right-fielder Hayden Schott.

Once Ogden settled into a rhythm, the Lions were able to stretch the lead against Crimson junior starter Adam Stone and sophomore southpaw Uday Narrotam, who came in to relieve the staff ace after four gritty innings. In the sixth inning, Narrotam walked the bases loaded with two outs and the Lions clutched up with runners in scoring position, bringing all three runners home to score on a double, single, and a passed ball by Feller.

The Crimson’s last gasp came in the top of the eight, when Berger showed Harvard’s continued affinity for the long-ball with a solo shot to right field, then Messervy scored Jacobsen with a sacrifice fly. Feller flew out with a runner on third to end the inning, however, and Snopek grounded out with two runners on in the ninth to seal the Crimson’s fate.

Despite the string of painful sweeps at the hands of Ivy League opponents, the team’s spirits don’t seem to be flagging, and they brought good energy into a midweek game against Merrimack College (10-21-1, 5-7 Northeast Conference) that finally broke the team’s slump. The 18-2 victory against a weaker opponent could be the spark that the Crimson needs going into the final stretch of the season. Seven of the nine starting hitters picked up a hit, including Baldwin, who went 2-4 filling in for Cooper, who has a mild hamstring sprain from the Columbia series.

“It was fun being the spark plug for the team,” Baldwin said of hitting in the lead-up spot. “A win always feels good, so we’re looking to carry that momentum forward.”

The Crimson followed up the Columbia series and the Merrimack win momentum with a 2-1 series win last weekend as they travelled to Princeton to play the Tigers, winning the last game 14-10 in twelve innings. Harvard then fell to University of Massachusetts Lowell this past Tuesday, April 26, 4-12, but looks to rebound with a three-game homestand versus Dartmouth that begins this weekend on Saturday, April 30, at 11:30am.