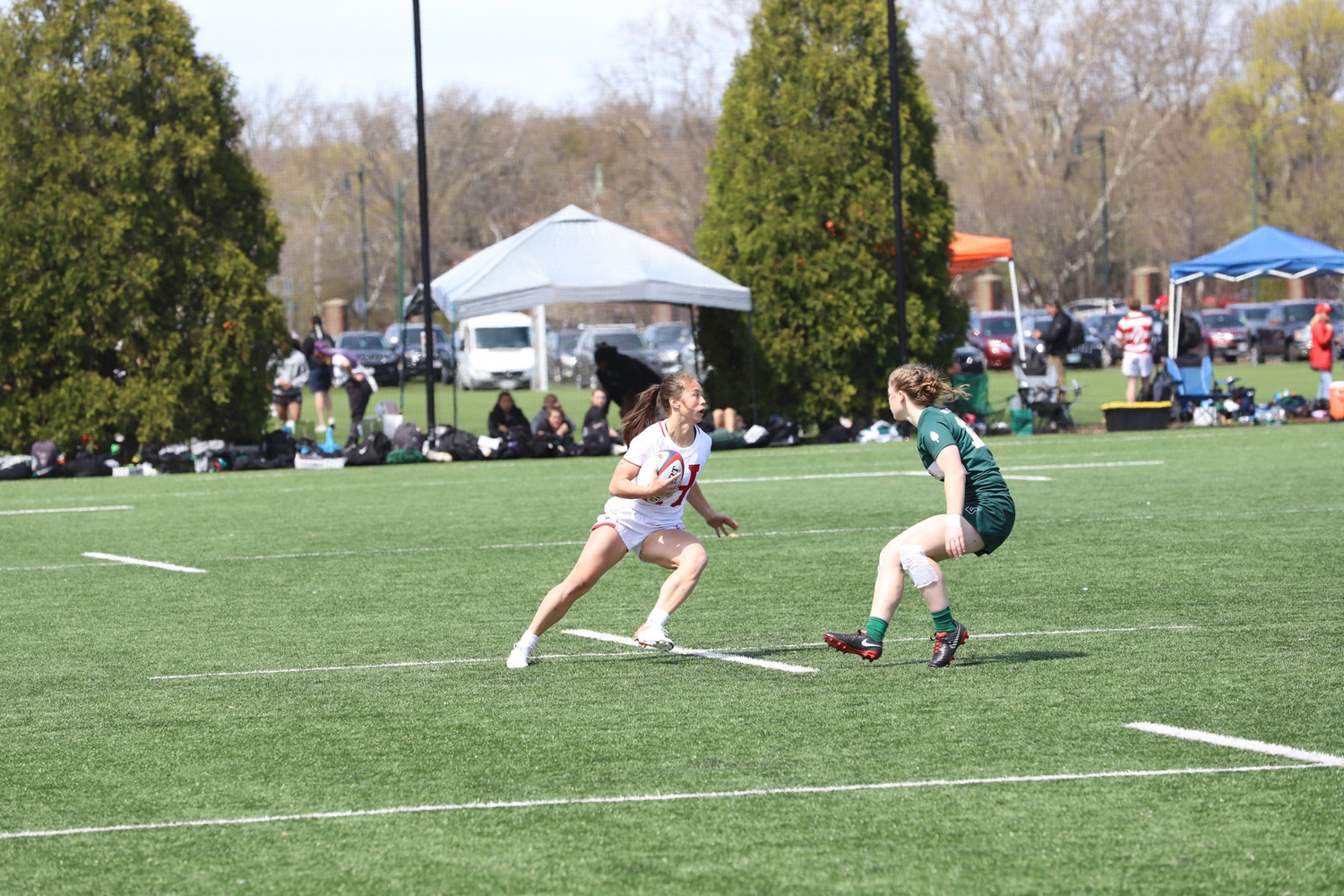 Senior center Sofie Fella sizes up her Dartmouth defender during the 2022 Ivy 7s Tournament on April 23. Fella scored eight tries for the Crimson throughout the weekend as she led the team to its second straight tournament title. By Owen A. Berger
By Mimi S. Koenig, Crimson Staff Writer

The Harvard women’s rugby 7s won the 2022 Ivy League Tournament this past weekend, going 3-1 on the day and ultimately defeating Dartmouth for the championship at Mignone Field. It was the Crimson’s fourth-ever Ivy 7s championship and its second tournament win of the season. Senior center Sofie Fella led the way for the Crimson, scoring eight tries throughout the tournament to continue her torrid start to the season.

“Individually, my goal was just to put everything out there on the pitch,” wrote Fella when reached via email. “I also knew going into it that it'd be my last home tournament on Mignone so I really wanted to play for my teammates, coaches and play hard with gratitude.”

The Crimson previously won the 2019 Ivy 7s championship and came into the tournament having won 10 of its last 11 7s matches since 2019, including six in a row at Mignone. Harvard continued its momentum all day on Saturday, despite the pressure of defending its title.

“It’s funny, because it’s such a totally different team than in 2019,” said head coach Mel Denham of handling the lofty expectations “I don’t even think we ever once even had a conversation about the fact that we were defending our 2019 7s Ivy League title. I think that was something that we really focused on was just taking the pressure off and going out there so we could play our game and keep the focus on what we want to do for the day.”

The Crimson started off pool play strong, with a 38-5 win against a Princeton team just recently elevated to varsity level for the 2022-23 season and then a come-from-behind victory over Brown. Against the Tigers, the Crimson got off to a quick start with a try only 20 seconds in by first-year scrum half Reese Morgan, which was quickly followed up by two tries from Fella to put the team up 19-5. Contributions by first-year flyhalf/fullback PK Vincze, senior wing/scrumhalf Sabrina Kim, senior scrum half Cassidy Bargell and first-year fullback Chloe Headland rounded out the dominant performance.

Against Brown, the Crimson found itself in a much closer match. An early score by the Bears was answered by a try from first-year wing/fullback Kiani Akina. A subsequent try by Morgan and conversion by Vincze sent the Crimson into the half up 14-12. After the break, Bargell extended the lead, only for Brown to take a 26-21 lead on the back of a pair of tries and conversions. After tying the game up, Harvard sought a game-winning try on its final drive. With the clock ticking down, junior center/flyhalf Alex Pipkin found Morgan for a game-winning try to eke out a 31-26 victory.

“We sort of strategically planned to kind of match our speed against Princeton and match a little bit more power against Brown,” Denham explained. “But always, at the end of the day, just kind of keep to our game and play our game despite, you know, whoever we’re playing.”

Despite suffering its first defeat of the season in the third match in pool play against Dartmouth, 22-19, the Crimson was immediately able to correct its faults in the teams’ championship rematch.

“It’s hard to win against a team twice in a row in 7s, especially when the team is good competition like Dartmouth,” Fella wrote. “We played hard and well against them, so the narrow loss didn’t really affect us too badly. It fueled us for the next game. In 7s, the team that wants it more is going to win so our focus was just stay hungry and gritty. With this mentality, we had a really firey start and it was a great first half for us.”

The Crimson did indeed come out strong. A quick try by Fella, and one from sophomore flanker Nafanua Malietoa Fitisemanu following a yellow to the Big Green gave the Crimson an early 12-0 lead. While still playing with the woman advantage, Bargell added another try following a breakaway from a ruck, taking the Crimson into the half with a 17-7 lead. Dartmouth was able to cut the advantage to 17-12 with under three minutes to go, but with the Big Green threatening, Harvard was able to strip Dartmouth near the try line and Fella added a final try–untouched–to secure the championship for the Crimson.

Denham expressed her pride, not only for those who were on the match roster, but also the rest of the team’s contributions off the field.

“I think the feeling at the end of this weekend is just really proud of everyone,” she said. “7s is a real team sport. Only 12 people are making these match rosters. So you really have to kind of know your role and be there and be your best for the team. You know, they’re long days and so, really proud of everyone’s effort and also just all of the off field roles with some of our players that weren’t in the playing group this weekend.”

“I’m so proud of our team,” Fella echoed. “ We have been building all 7s season and have so many talented young players. I’m so excited to see them play and dominate in the next few years as well. We’ve been building in confidence as a team and individually as well, which is great for nationals in a few weeks.”

Fella hopes that Harvard’s increased confidence can result in a national title, as it looks toward the USA Rugby Collegiate 7s Championships in Atlanta, Ga. on May 14-15.

–Staff writer Mimi S. Koenig can be reached at miriam.koenig@thecrimson.com.