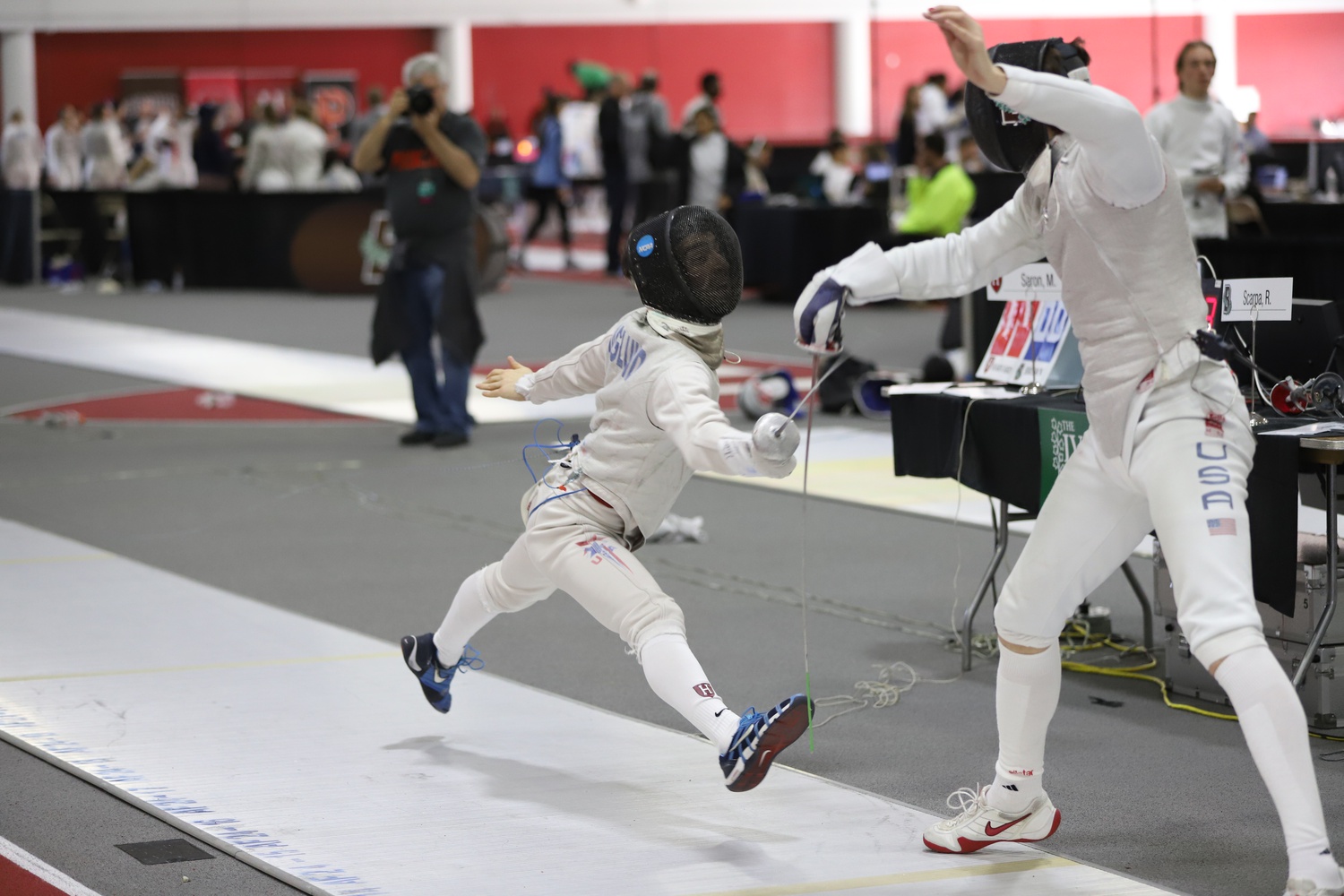 Harvard fencing traveled to the campus of Notre Dame in Indiana to compete in this year's NCAA Division I fencing Championships from March 25 to March 28 and came home with two individual sabre champions and an overall second place team finish. Led by Junior captain Elizabeth Tartakovsky and sophomore captain Filip Dolegiewicz, the team’s second place finish was their best result since 2006.

On the women’s side, Tartakovsky came out of the gates strong, fencing in women's sabre, alongside her teammates freshman Emily Vermeule and sophomore Greata Candreva in women’s epee, and freshman Lauren Scruggs and sophomore Annora Lee in women’s foil. Tartakovsky was the only Harvard fencer who has had previous NCAAs experience, as the event was canceled in 2020 due to the pandemic and the Ivy League season was canceled in 2021. After a third place individual finish her freshman year, Tartakovsky returned to the pinnacle of collegiate athletics with high expectations high for herself, but a greater belief in her team.

“We were all excited. I had high expectations because I placed third my freshman year...but I came back and wanted to do better,” said Tartakovsky. “I think everyone that didn’t have NCAAs before really stepped up in terms of their energy, supporting each other, and all the preparation that we did.”

The women set the stage in the first two days of competition with excellent performances all around. Each fencer competed in twenty-three matches and the top four finishers with the best records then fenced in the final four semifinal bracket. These short matches only go up to five points. The Crimson came out with strong results on day one and two of competition.

“In those final four matches, you fence up to fifteen. It is a much longer match with a lot of changes in momentum. Someone goes up, then someone goes down,” explained Tartakovsky.

She accepted this challenge as an underdog in rankings, but came out victorious after defeating fellow Ivy League competitor, junior Maia Chamberlain of Princeton, 15-13. She went on to win the individual sabre national title, defeating Atara Greenbaum of Notre Dame 15-10. Vermeule finished second place overall, achieving this impressive feat as a freshman. The Crimson totaled four top-ten finishes amongst the women and an overall record of 76-39.

After a stunning women’s performance, it was time for days three and four of competition featuring the men’s side. Both the women and men needed to perform well to combine for the overall team championship results, and they did just that. After the third day of competition, the first day for the men, the Crimson sat in third place overall with Dolegiewicz and first-year James Chen leading the charge in men’s sabre and men’s foil, respectively.

“[You must] keep your head straight and stay focused the entire time because if you lose a bout or two in the first phase of the tournament it is very easy to get discouraged,” Dolegiewicz reflected.

Overall, the sophomore sabre fencer felt he was able to manage his nerves and take it match by match leading up to the final day of competition. Dolegiewicz, the No. 2 seed, recounted the change in atmosphere as he was headed into the semifinal round.

“They [the final two matches] were in a different arena, the same place where Notre Dame basketball plays. It was really cool because there was a jumbotron playing replays and a massive area where my parents and my team were sitting,” Dolegiewicz stated.

He then explained that it was not all smooth-sailing in these final matches.

“The first semifinal match started off pretty poorly. I was very nervous. I went down 7 to 3 in the first part of the match,” Dolegiewicz confessed.

However, humbly and simply put right after this statement, Dolegiewicz conceded that he went on an astounding 12 to 1 point run. Only uphill from there, he won 15-11 in the final match, earning the individual NCAA men’s sabre championship title.

Dolegiewicz knew that his accomplishments could not have been possible without the unconditional support from his teammates and his parents. He expressed that he is especially grateful for his assistant coach, Eli Dershwitz, for pushing him to reach his potential this season.

“Learning from him is an incredible experience. Having him as a training partner every single day at Harvard really helped me improve my fencing throughout the entire season,” Dolegiewicz said.

Tartakovsky and Dolegiewicz will return to fence for the Crimson next year, with high expectations for the season and also at the international level.

“It would be nice to repeat the NCAA win of course. Outside of the NCAA, I have aspirations to make the Olympic team,” said Tartakovsky. “The 2024 Olympics are not that far away and I’m hoping to give that another chance.”

Tartakovsky traveled to the Tokyo Olympics this past year as a training partner. Fueled by her preparation and dedication, her Olympic dream becomes more real every day. As for Dolegiewicz, he will return next year with similar aspirations on the collegiate and international stage.