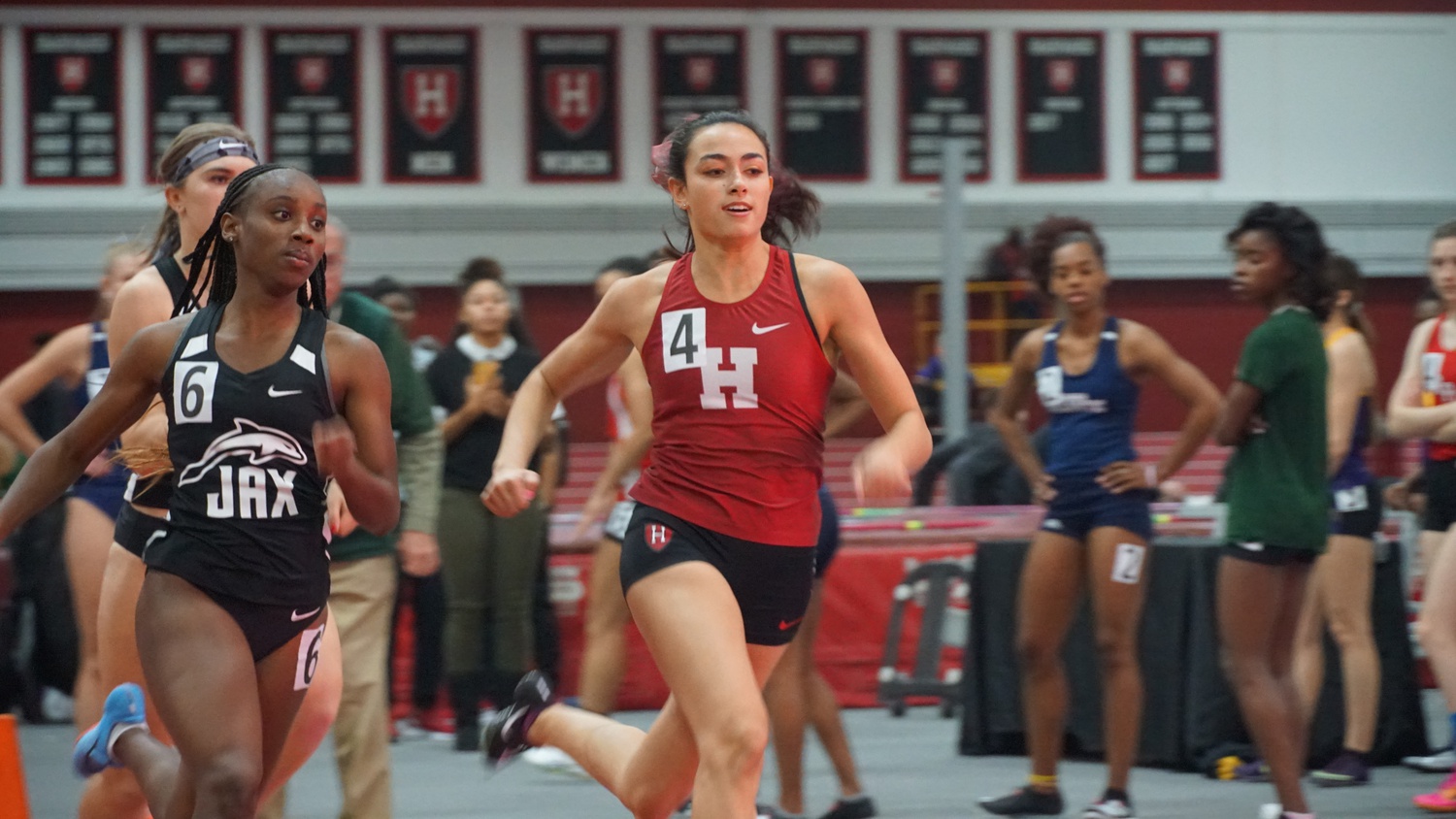 Harvard women's track and field competes in the Crimson Elite meet on Jan. 31, 2020. Although it had been away from competition for nearly two years, it has started off its spring season strong in 2022. By Zadoc I. N. Gee
By William Connaughton, Crimson Staff Writer

Over the past two weeks, Harvard track and field has kicked off its spring season with four school records, a strong performance at the Duke Invitational, and a sweep of Yale in their dual meet. The early-season success sets a strong tone for the rest of the campaign.

“The turn around from winter to spring season is very quick. A lot of us only get a couple days off before we are right back training, so the bumps and bruises of a long season can really start to show,” commented senior co-captain Kylie Hilton on the differences between the winter and spring season. “With indoor track and field, we not only have an entire preseason to train and prepare, but also many more competitions. It’s also nice to have the whole team out there competing. Some events, like the javelin, are only outdoors, which means those athletes do not get to compete until the spring. It’s nice to watch all their hard work finally show in competition.”

On March 24-26, Harvard’s distance teams traveled down to N.C. for the Raleigh Relays. For the men, senior standout Matthew Pereira finished 15th in the 5k, good enough for fourth best in school history. In the 10k, sophomore Acer Iverson set a new Crimson record, placing sixth in the event with a time of 28:24.56, which bested the previous record set by Olympian Kieran Tuntivate ‘20. Not far behind, senior David Melville set the third-best time in Harvard history, crossing the line in 29:13.44.

For the women, senior Judy Pendergast also set a school record in the 5k, finishing in tenth with a time of 15:58.54. Later, first-year Maia Ramsden put up the second-best time in Harvard history in the 1500m, placing ninth in four minutes, 18.06 seconds. Finally, in the 10k, junior Iz Sagar finished 20th and first-year Eloise Freitag finished 30th, good enough for fifth and eighth all-time for the Crimson, respectively.

The same weekend, the short distance and field athletes split between the Hurricane Invitational at UMiami and Riverhawk Invitational at UMass Lowell. In Fla., junior Tina Martin, first-year Egbe Ndip-Agbor, senior Jada Jones, and first-year Eden Finkelstein captured a win in the 4x100m relay with a time of 45.36. Continuing her strong day, Finkelstein came in first in the 100m with a time of 11.61. Senior Sharelle Samuel and first-year Izzy Goudros added two more wins to the Harvard tally, taking first place in the 400m hurdles and javelin respectively. Finally, despite not winning the event, freshman Anastasia Retsa set a Harvard record in the women’s pole vault with a mark of 4.15m in a third-place effort.

This past weekend, three Harvard athletes posted strong performances in multi-events at the Duke Invitational. Goudros continued her stellar season, placing second in the heptathlon with a total of 5,444 points. This mark was the second highest in school history at the meet. Sophomore Jada Johnson also had a strong day in the heptathlon, finishing seventh. Finally, junior John Minicus placed third in the decathlon with 6,532 points, setting a new personal best and tallying the third-highest score in program history.

To round out the week, in the first spring Havard-Yale dual meet since 2019, the Crimson men and women swept the Bulldogs 87-62 and 75-70 respectively. On the track, the same record-setting 4x100m team from late March repeated their success in New Haven, winning the event by 0.06 seconds. Melville ran a personal best of 9:10.05 in the 3k, good enough to win and notch the eighth-fastest time in Harvard history. In addition, Ward won the 400m with a time of 47.50, the ninth-fastest by a Crimson athlete, and Stradford won the 100m, third best in school history. First-year Peter Fischer won in the 400m hurdles, while Pereira continued his dominance in the 5k, winning the event with a time of 13:50.17. Pereira’s performance was good enough for fourth all time for Harvard. The Crimson continued its success in the field events, with junior Kyle Murphy, first-year John Chilson, and fellow first-year Kenneth Ikeji winning the long jump, javelin, and hammer throw, respectively.

For the Harvard women, first year Shaked Leibovitz set a personal best in the 3k steeplechase, the eighth-fastest time in school history. In the 800m, senior Anna Juul set a personal best, winning the event in 2:09.13. Finkelstein captured two event wins on the day, setting the sixth-best mark by a Crimson athlete in the long jump and later winning the 200m. Junior Estel Valeanu, junior Hannah McLaughlin, and junior Cammy Garabian won the discus, the javelin, and the hammer throw. Garabian’s hammer throw landed her in fifth in the Crimson record books.

“Our training cycles vary across all the event groups, but generally speaking we will start easing off around mid-April to give our bodies time to relax and prepare for championship season,” noted junior co-captain Max Serrano-Wu on the training strategy going forward. “We have a couple of two days meets coming up at Auburn, [Virginia], and Baylor, so we’ll decrease the practice intensity going into those meets to ensure we perform at the highest level. We have to make sure we take care of our bodies on the ‘other side’ of the river, like sleeping and eating properly, and staying on top of academics.”

Following the strong start to the spring track and field season, Harvard will compete in two meets next weekend, at Auburn on April 15-16 and at UMass again on April 16.

–Staff writer William Connaughton can be reached at william.connaughton@thecrimson.com.