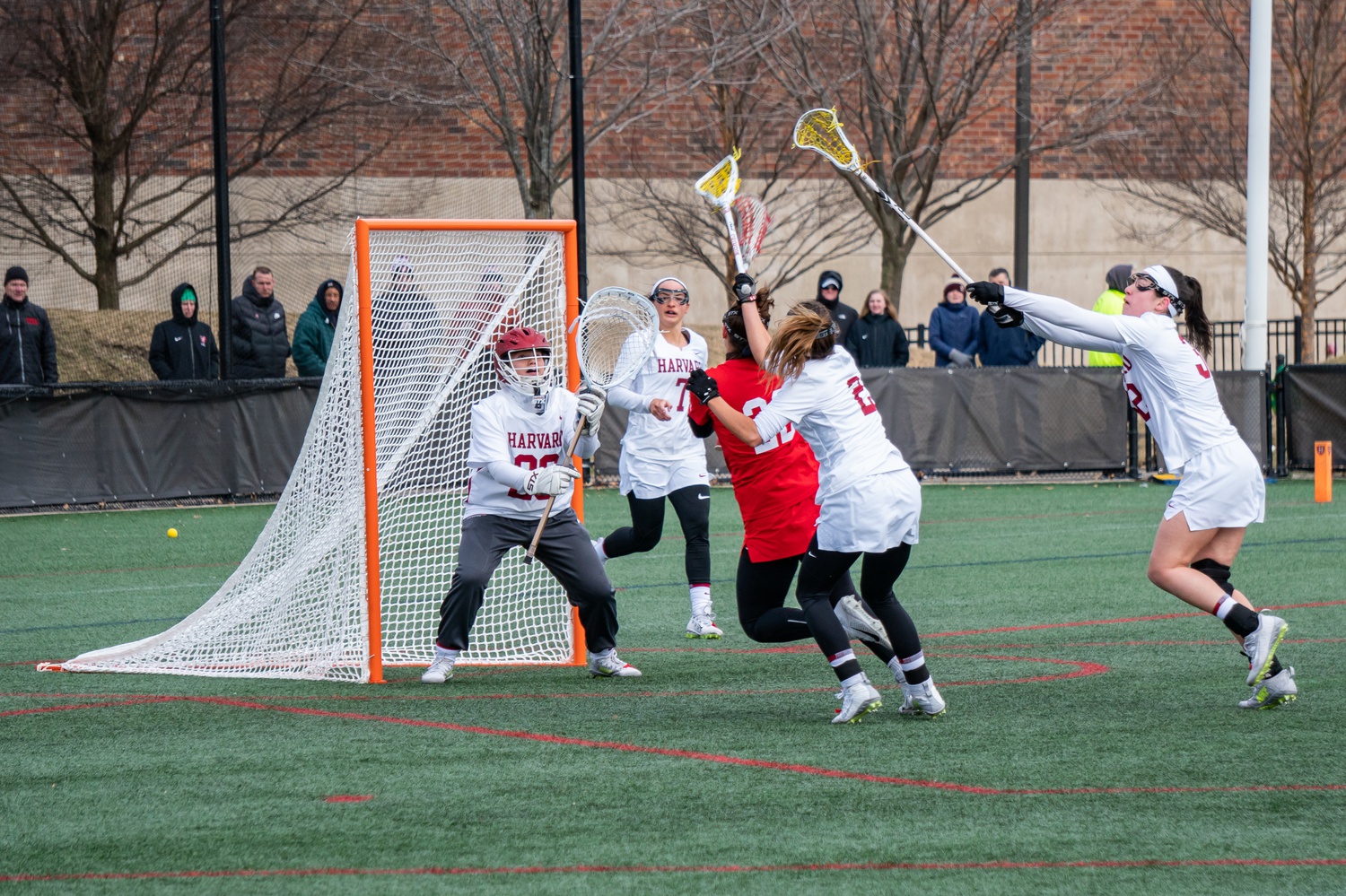 The Crimson defend against an attack from Cornell on February 29, 2020 in what would be a close 8-9 loss at home. By Brendan J. Chapuis
By Sydney Farnham

While the rest of the student body dispersed for a much-needed mid-semester recess, the Harvard women’s lacrosse team (3-3, 1-0 Ivy League) traveled to Jacksonville, FL for two Spring Break matchups. Following a hard-fought loss on Monday to MAAC opponent Monmouth (5-3, 0-0), the Crimson came ready to battle with No. 20 Jacksonville (4-3, 0-0 ASUN) on Thursday. Despite two early goals from sophomore midfielder Maddie Barkate, the high-powered Jacksonville Dolphins stormed back and then some, defeating the Crimson 21-8.

“Those programs…the style of the game, are gonna give us a lot of good experience heading into this next stretch of games with our Ivy opponents,” said Harvard head coach Devon Wills. “Jacksonville was really skilled in some of the offenses that they were running against us. They were really patient defensively. So again, it kind of helped to prepare us even though it was a disappointing trip. You have to play these top 15 opponents to be prepared for your Ivy League games.”

The pair of goals by Barkate were quickly followed by eight Jacksonville goals to close out the first quarter of play. Although the Crimson fought an uphill battle for the remainder of the game, they certainly never gave in. As Harvard headed into the second quarter down seven, Coach Wills made a swap at the goalkeeper position, subbing in first-year goalie Lizzie Francioli for sophomore Chloe Provenzano, who already has 46 saves on the season. Wills commended both of her keepers, who constantly help each other improve even while competing for time.

“My mentality has been to always be ready if my name were to be called. At that point in the game I just wanted to do whatever I could to help my team. I was just thinking about trying to generate a little bit of offense and be a spark for the team,” said Francioli, who was recently cleared to return after an ACL injury. She made eight saves on the day, bringing that spark in the second quarter, though Harvard headed into the second half down 13-4.

Francioli and Provenzano are two of 19 underclassmen on the 33 member women’s lacrosse roster. In addition to the obvious inexperience of first years and sophomores due to the pandemic, it should be noted that the junior class also played very few games before the pandemic hit. Nevertheless, the group attacks every challenge and carries itself with an impressive maturity and levelheaded-ness on the field.

Seven of the eight goals contributed in the loss to the Dolphins were secured by sophomores. Along with Barkate, sophomore attacker Riley Campbell and midfielder Callie Hem each scored a pair of goals. Junior captain Grace Hulslander also contributed a beautiful diving goal from the crease. Three of these goals came in the third quarter, when the Crimson was able to match the tempo of Jacksonville, but it would not be enough.

“I'm just really pleased with how they've embraced the challenges of every different game and really how they've…handled themselves out on the field, both from a tactical standpoint as well as a mental standpoint,” Wills said when asked about the contributions of her younger players. “It's not always going to be about the X's and O's—but the process that they're embracing, and it’s really fun to watch.”

The team certainly reflects the optimism and drive of their coach, who gives credit to a talented and well-coached Jacksonville team, but also recognizes the potential of her squad.

Francioli echoes the message of her coach when asked about what this game means for Harvard moving forward.

“Games like that give you an opportunity to show what your team is about and what we can do as a team,” said Francioli, referencing the challenge of playing a ranked opponent. “It was the perfect opportunity for us to gauge what we need to work on.”

The Crimson get their next opportunity to compete on Saturday, March 26th at home in an Ivy League matchup against Cornell.