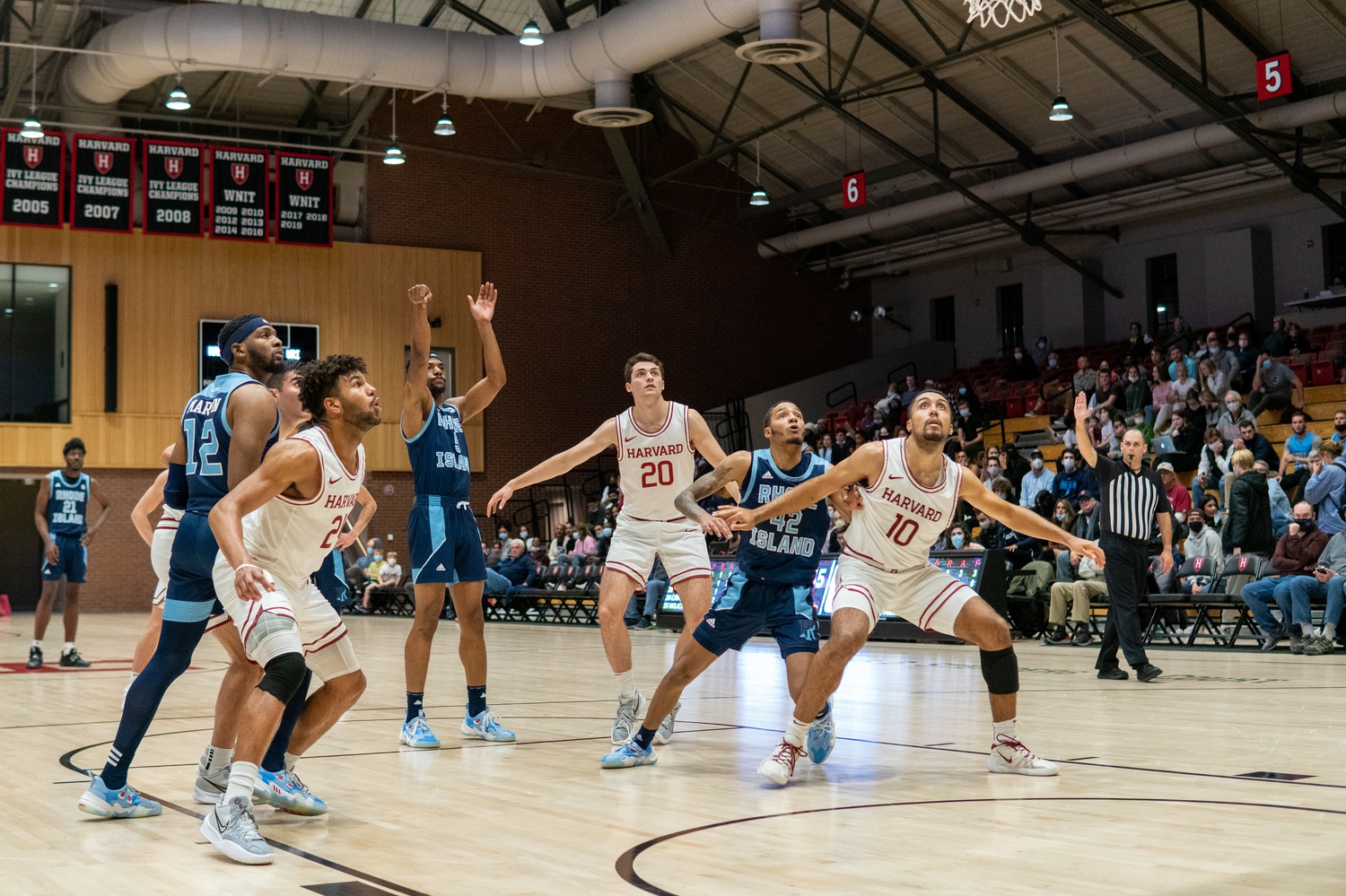 Senior guard Noah Kirkwood (10), sophomore guard Sam Silverstein (20), and senior forward Kale Catchings (24) battle for a rebound in a 64-57 loss to Rhode Island on Dec. 1. This weekend, the Crimson lost twice and were eliminated from playoff contention. By Zadoc I. N. Gee
By Mahtab Shihab, Crimson Staff Writer

The last two times the Crimson was in the Ivy League tournament, it lost the final game to the host team. During the 2020 season, it seems their fortune would be reversed, as it was finally the one hosting the tournament. Unfortunately for Harvard, its season was canceled before it could experience the postseason, and for the last two years, the Crimson had been awaiting the opportunity to play in the Ivy League tournament at Lavietes Pavilion.

Following two losses against Princeton (21-5, 11-2 Ivy) this past week, Harvard (13-12, 5-8) was officially eliminated from postseason contention and will not have the opportunity to defend its home court in the Ivy league tournament.

Contrary to what the team’s record indicates, the Crimson has been competitive against the best teams in the Ancient Eight. Each of its six losses against the top three teams in the Ivy League were by single-digit margins – with several of these games decided by the last possession.

“We've had some tough games all year in different ways, close ones that came down to the last possessions,” Coach Amaker said. “The league has been like that forever. Princeton is really good in my opinion and they have shown they are the best in our league this year.”

Harvard’s games against the Tigers were no different. A Friday night trip to Jadwin Gymnasium saw the Crimson in a nailbiter against Princeton, where the Tigers eventually pulled away with a late scoring burst to win 74-67. Returning home on Sunday, Harvard had a one-point lead in the final seconds of the game before Princeton’s junior forward Tosan Evbuomwan scored the game-clinching layup with three seconds remaining in a 74-73 victory.

“It was just an outstanding performance by them to make plays when they had to,” Coach Amaker admitted. “At the end there, we were trying to take a foul, and we didn't execute it, so that really hurt us there at the end.”

Despite the disappointing outcome, the Crimson had a bevy of great performances from the team. Senior captain Kale Catchings scored a career-high 19 points while first-year guard Evan Nelson contributed 14 points. Nelson has started coming into his own during the latter portion of the season, scoring in double-digits in three of the past five games.

“He [Nelson] has been finding his rhythm, which is nice to see for a younger player, and his confidence is growing,” Coach Amaker said. “You can see it in him that he's played more and gotten more comfortable. His teammates have confidence in him, and it’s wonderful to witness that.”

Along with Nelson, junior guard Luka Sakota has continued to establish himself as a go-to option during the critical moments of the game. The Etobicoke, Ont. native was an integral part of why Harvard had a chance to win at the end of Sunday’s game. Sakota hit two clutch free throws to put the Crimson up by one with 18 seconds left in the game.

“You know, he really came through and came to life for us to make some big baskets, and those free throws when he got fouled on the break were outstanding,” Coach Amaker said. “It was amazing that he could do that, and we were so disappointed we couldn't hold it down on the other end to get the stop that we needed to get the win.”

Even though Harvard’s chances of advancing to the NCAA tournament have been stymied, its season is not yet over. The Crimson’s last game of the season will be at home against Dartmouth, and this season-ender will be especially memorable for the seniors, who havehad to experience one of the most adverse four-year stretches of any collegiate player.

“I am trying to make sure that the team knows that we should be thinking right away about next weekend for our seniors,” Coach Amaker said. “It's hard for all this to be absorbed right now,but I want them to hear that from me.”

The seniors have been a battle-tested group, which has had to lead a team with numerous injuries throughout the season. This game was especially bittersweet for senior forward Noah Kirkwood, who played through injury and still scored 12 points.

“I was proud of the effort and how they fought even with Noah banged up,” Coach Amaker said. “He couldn't really go today and tried, and we tried our best to do what we could and get some neat things done.”

It is particularly unfortunate that the Ottawa, Ont. native cannot continue his exploits in the postseason, as he is having the best season of his college career.

–Staff writer Mahtab Shihab can be reached at mahtab.shihab@thecrimson.com.