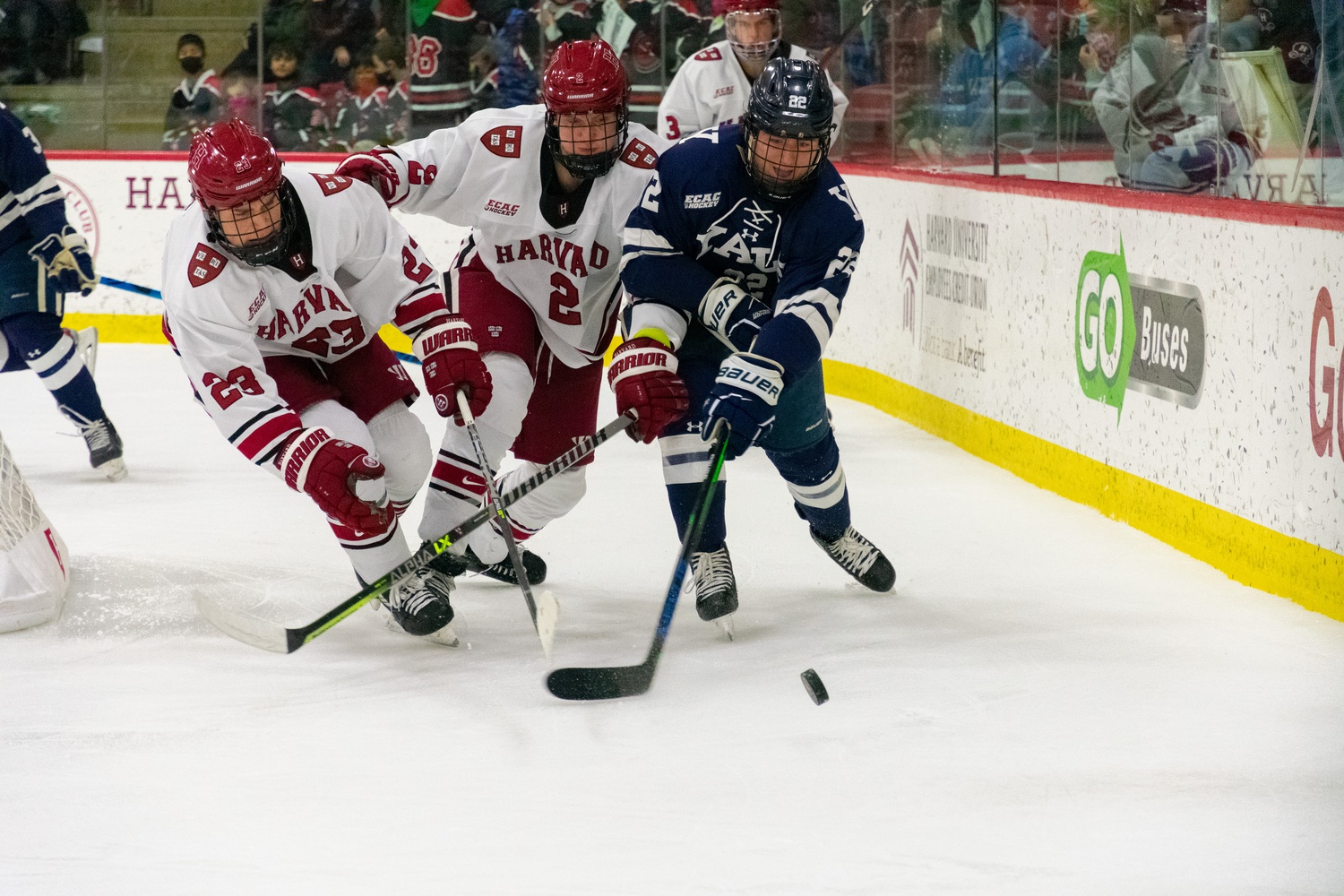 Junior forward Baker Shore (23) and first-year defenseman Ian Moore (2) battle in the defensive zone with a Yale player in a 2-0 victory on Feb. 11. On Saturday, Moore and Shore helped the Crimson clinch an Ivy League title. By Julian J. Giordano
By Aaron B. Shuchman, Crimson Staff Writer

On its final homestand of the regular season, the Harvard Men’s Ice Hockey team recorded a 4-3 win against the Princeton Tigers before defeating the No. 4 Quinnipiac Bobcats 1-0 on Senior Night at Bright-Landry Hockey Center. The victories clinched the Ivy League championship for the Crimson and secured a first-round bye for the ECAC playoffs.

“This was a great opportunity for us to make a statement,” said senior forward and captain Casey Dornbach. “Not only to go out with a bang in our last regular season home game, but to play a top-five team at the end of the year…we wanted to do this for our seniors.”

Harvard received reinforcements prior to Friday night’s game, as sophomore forward Sean Farrell and junior forward and captain Nick Abruzzese both returned from a stint on Team USA at the Winter Olympics.

“I wanted to make sure they felt no pressure to play,” head coach Ted Donato said. “As coaches, we’re in charge of looking out for their best interests, not only for this weekend but for the long term as well.”

Facing the Bobcats top-ranked defense, led by goaltender Yaniv Perets and his ECAC-leading 0.84 goals against average, the Crimson found offense to be at a premium in a tight first period. Backed by junior goaltender Mitchell Gibson, Harvard was able to withstand two chaotic net-front scrambles and survive the first few minutes unscathed. However, Quinnipiac continued to dominate offense, as forward TJ Friedmann split the defense for a breakaway but shot the puck high over the net.

“Looking at their record, all their games are one goal games, even though they’re as good as they are,” Gibson said of the Bobcats. “A bounce or two ends up being the decision maker.”

Halfway through the period, the Crimson started to get engaged offensively. First-year forward Matthew Coronato loudly clanged a wrist shot off the post, and the “Jersey Boys” line of sophomore forward Alex Laferriere, first-year forward Alex Gaffney, and junior forward John Farinacci generated several quality chances, including a two-on-one rush that was denied by Perets. Despite the sluggish start, Harvard was only outshot 14-11.

The Crimson’s strong end-of-period offense carried over into the second period. Gaffney made a flurry of strong moves to maneuver to the net, but he shot it just wide. Coronato had a pair of strong chances on a rebound and then off a beautiful behind-the-net feed from Abruzzese, but he missed both wide of the net. Quinnipiac’s best chance came when Friedmann hit the post on a wrist shot, but the Bobcats were otherwise kept outside of the prime scoring areas.

The game appeared to be heading to a scoreless tie at the second intermission, but Dornbach, playing in the last regular season home game of his career, had other ideas. After junior forward Baker Shore made a strong play at the blue line to keep the puck in the offensive zone, Dornbach collected the loose puck and skated to the middle, where he fired a wrister past Perets for the 1-0 Harvard lead.

“Baker made a really nice play,” Dornbach said. “I was just looking for a lane, thinking the goalie would be sliding that way. Just trying to get it back across the grain, and just got a fortunate bounce.”

The third period was another tight-checking affair, as neither team could generate much offense save for a golden opportunity for each side. Early in the third, junior forward Wyllum Deveaux received a perfect tape-to-tape cross-ice pass in front of the net, but Perets came all the way across his net and was able to get a piece of his shot to keep the game at 1-0. The Crimson were sent to the penalty kill after a controversial cross-checking call on first-year defenseman Jack Bar, but they successfully neutralized the Bobcats power play.

With five minutes to play, Harvard significantly tightened its defense. First-year defenseman Ian Moore made several outstanding plays blocking shots and disrupting cross-ice passes, and Gibson stood tall when he needed to. As time wound down, the Bobcats had one final opportunity when defenseman Zach Metsa had a wide open net to shoot at from inside of 10 feet, but his shot sailed high, securing a 1-0 victory for the Crimson and a 39-save shutout for Gibson.

“I knew that if we just continued at the same pace we were going at, we were going to shut down those last four minutes,” Gibson said.

Following the victory, the team honored its six graduating seniors with a ceremony on the ice, before posing for a team photo to celebrate the conference championship. 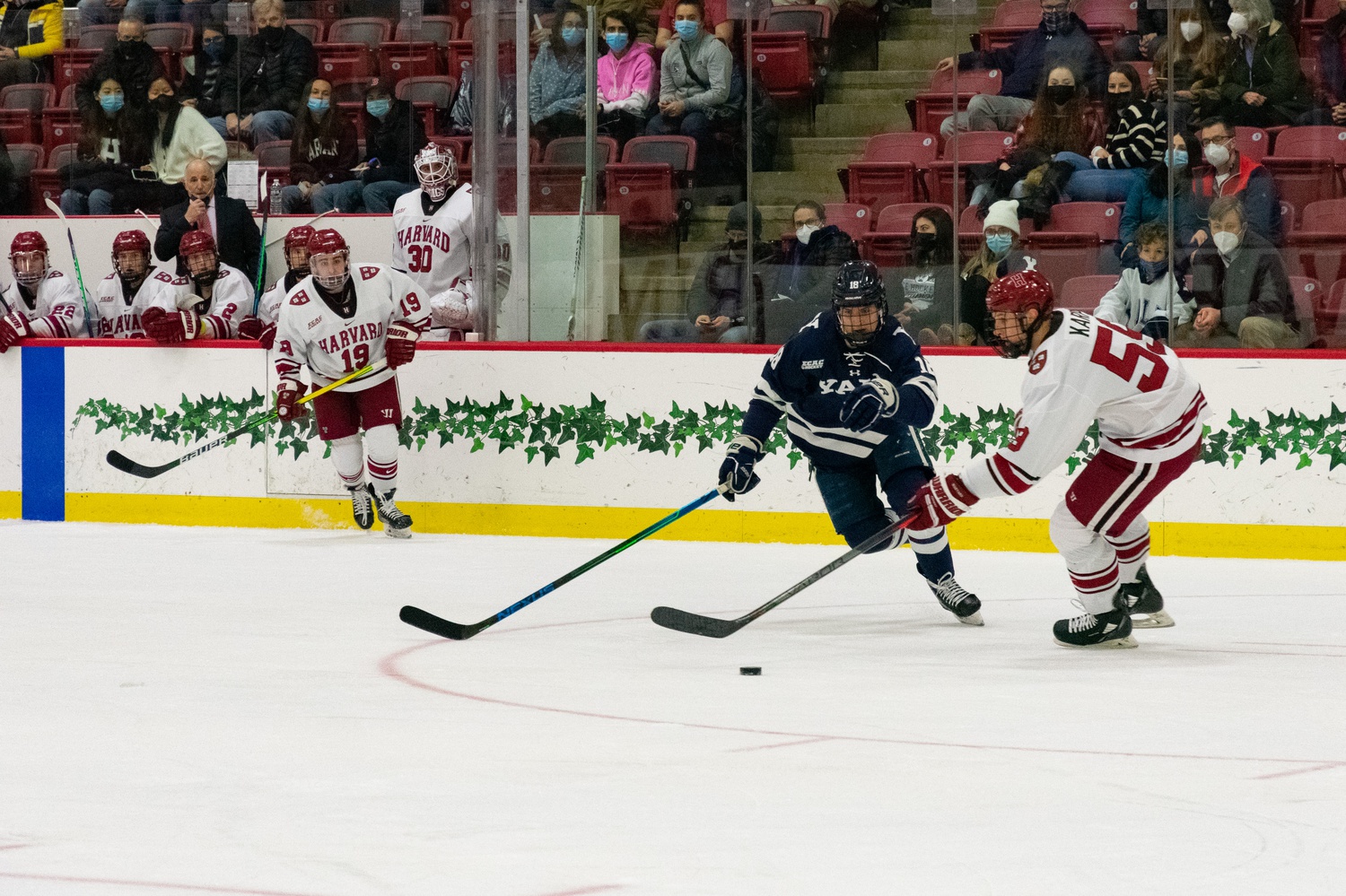 First-year forward Zakary Karpa pursues the puck during a 2-0 win over Yale on Feb. 11. Meanwhile, teammate, first-year forward Matthew Coronato looks on. Coronato scored the game-tying goal in an eventual 4-3 victory over Princeton on Saturday. By Julian J. Giordano

With Harvard and Princeton entering Friday night’s matchup narrowly separated in the conference standings, the game would go a long way to deciding the 2021-2022 Ivy League title.

The first period began ominously for the Crimson. Only two and a half minutes into the game, Bar was whistled for cross-checking while fighting for possession behind the Harvard net. Although the Crimson were able to kill off the penalty, the Tigers continued their strong early play, which culminated in a goal by right wing Finn Evans on a shot from the point through heavy traffic just shy of six minutes into the period, putting Princeton up 1-0.

Play evened out after the Princeton goal; however, unlike the Crimson, the visitors were able to capitalize. Harvard’s offense was driven by a series of strong shifts from the “Jersey Boys,” while on the Princeton side, both forward Spencer Kersten and defenseman Nick Carabin had shots ring off the post and out. Eventually, the Tigers were able to double their lead to 2-0 when defenseman Matthew Thom’s shot from the point ricocheted off a Crimson player in front of the net and past Gibson.

“This is a process, especially when you have 15 guys on the roster playing college hockey for the first time,” Donato said.

Towards the end of the period, Farrell was skating into the offensive zone with his head down when he was violently upended by Princeton forward Joe Berg. Farrell stayed down on the ice for several minutes being attended to by the medical staff until he was helped off the ice by his teammates. Farrell did not return to the game due to an upper-body injury, and Harvard went to the locker room down 2-0.

Despite Farrell’s injury and the poor first period results, the Crimson returned to the ice in much stronger form for the second, as they finished the second period leading the Tigers in shot attempts 55-28. Only 15 seconds in, senior defenseman Marshall Rifai rang a point shot off the post, and junior forward Austin Wong had a strong look as well. Coronato thought he had cut the deficit to 2-1 when he deflected Abruzzese’s shot past Tigers goaltender Andrew Porter, but the goal was waved off due to a high-stick.

Harvard’s momentum continued on two power play chances later in the period. After Abruzzese was taken down by Princeton defenseman Mark Paolini, the Crimson were strong on the man-advantage, with Coronato generating two high quality scoring chances from around the net. On a later power play opportunity, Harvard generated even more offense, with Coronato, Abruzzese, and Laferriere all sending shots wide of a partially open Tigers net, while Coronato’s attempted between-the-legs deflection was denied by Porter’s right pad.

Facing the prospect of entering the third period down 2-0, senior forward Jack Donato continued his recent clutch goal-scoring to saw the lead in half. After he and Dornbach combined to force a turnover as Princeton was attempting to exit the defensive zone, Jack Donato fed a pass from the wing to Dornbach, who was cutting to the net. Dornbach’s initial shot was denied by Porter, but Jack Donato collected the rebound and banked the puck off Porter and into the net, slashing the Crimson deficit to 2-1 at the second intermission.

After getting its offense into gear in the second period, Harvard emerged from the locker room in attack mode for the third. The Crimson began the period with a flurry of chances, and Coronato tied the game less than 90 seconds into the third after he took the puck coast-to-coast and slipped a wrister through Porter. Two minutes later, the “Jersey Boys” delivered a go-ahead score when Farinacci lofted a perfect pass to a cutting Gaffney, who accelerated through the slot and snuck a backhander past Porter.

The “Jersey Boys” wouldn’t stop there. Four and a half minutes later, on a power play, Farinacci executed a nifty series of moves to maneuver through the Tigers defense and find Laferriere, who finished the play off in front of the net to stretch the Harvard advantage to 4-2. Princeton would answer back four minutes later on a power play of its own, as a poor decision by Shore led to a turnover and a goal from Tigers defenseman Pito Walton, cutting the Crimson lead to 4-3. However, Harvard locked down on defense after that, and the Crimson was able to withstand a prime Princeton scoring chance as time expired to secure the victory.

“Early on in the season, we were having some success, but we weren’t playing in a lot of close games,” Ted Donato said. “We lost some games where in some ways we beat ourselves. We’ve been in some close games recently…had some real tough lessons that we’ve learned.”

The Crimson are back in action next weekend to close out the regular season with a three-game road set against Union College, the Rensselaer Polytechnic Institute, and Princeton.

-Staff Writer Aaron B. Shuchman can be reached at aaron.shuchman@thecrimson.com.