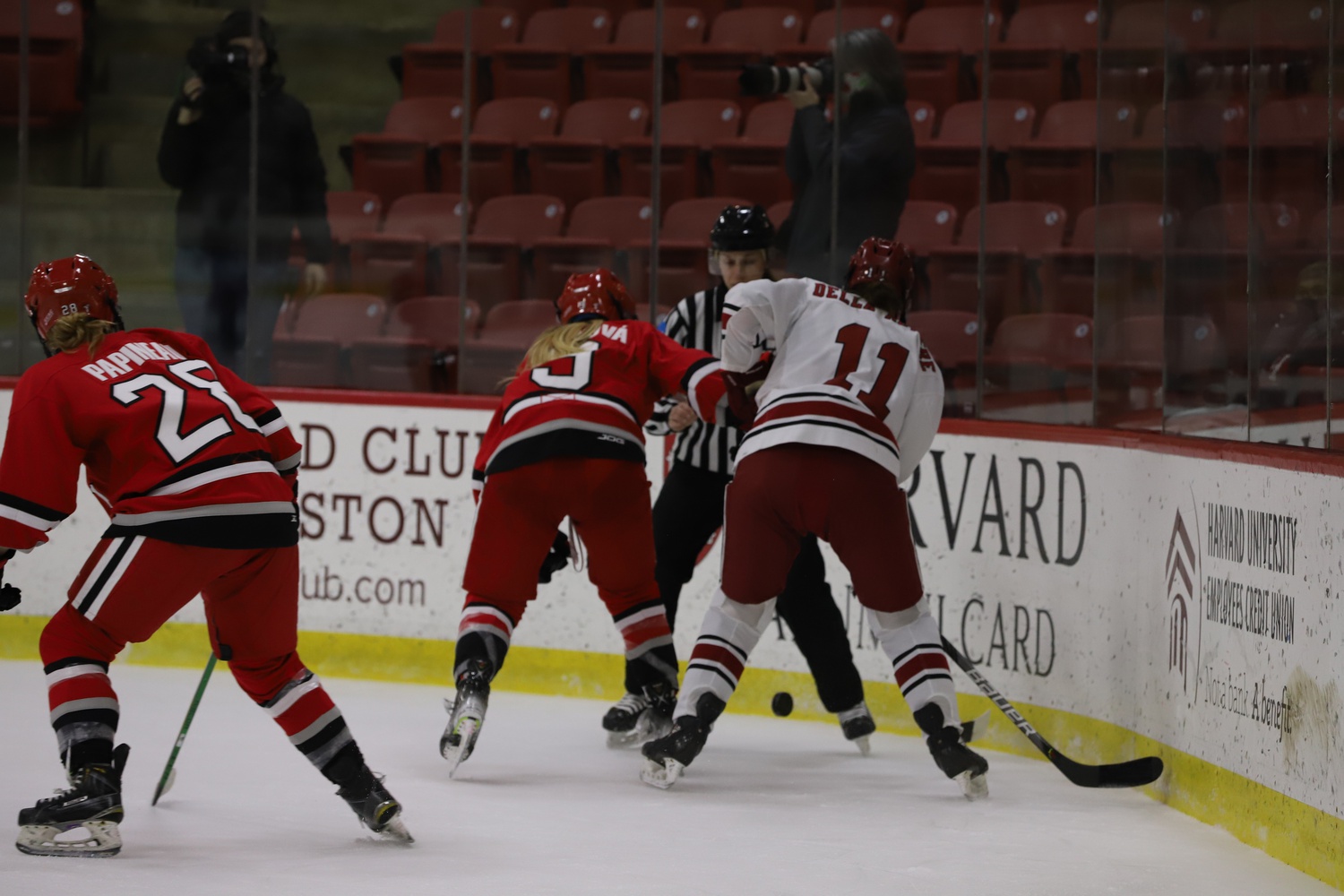 Harvard junior forward Kristin Della Rovere battles along the boards in a 4-3 win over RPI on Dec. 4. Della Rovere scored the final goal in the Crimson's 4-1 victory on Tuesday in the Beanpot Semifinal. By Owen A. Berger
By Christopher D. Wright, Crimson Staff Writer

BOSTON — The 43rd installment of the Beanpot Tournament, Boston’s annual clash featuring Boston University and Northeastern alongside Harvard and Boston College, began at Matthews Arena Tuesday night after a nearly two-year hiatus. The Harvard women’s ice hockey team used a strong third period to pull away from Boston University in the opening game of the tournament.

“You can float around the ice or you can play with purpose,” said Harvard head coach Katey Stone. “I think the biggest thing is that our kids believe in themselves and their teammates.”

The first period proved to be one for the defenses, as neither team could score. Early in the period, both teams possessed the puck and fired shots on goal. Harvard’s best opportunity came when BU’s Kylie Roberts was assessed a two-minute penalty for roughing. However, the chance came and went as the Terriers were able to successfully kill off the power play. At the 13-minute mark, Crimson junior forward Kristin Della Rovere almost struck first blood. Her shot narrowly missed, careening off the left pipe. BU also had a chance to play the advantage in the first after Harvard junior defender Maryna Macdonald was called for tripping. The Terriers also failed to convert their power play, with Harvard returning to even strength with three minutes remaining in the first.

The Crimson struck first in the second period, when first-year forward Taze Thompson took the pass from senior forward Brooke Jovanovich and sent it between BU goaltender Kate Stuart’s legs. The momentum continued to swing Harvard’s way as it went on the power play at the seven-minute and ten-minute marks. However, the Terriers were able to weather the storm and kill off both of the power plays. A few minutes later, BU scored the equalizer when Lacey Martin slid one past Harvard senior goalie Becky Dutton.

To begin the third, both goalies were locked in, stopping shot after shot. This was the first time in the 2021-22 season that the Crimson had entered the third period tied. The Terriers had an opportunity to take the lead at the three minute mark when Harvard senior defender Emma Buckles was penalized for slashing. The Crimson were able to fight off the power play once again, this time holding BU without a shot on goal. Three minutes later, it was the Terriers’ turn to play one woman down, as Emma Wuthrich received a two-minute minor for tripping.

However, the Crimson again had no luck on the power play. Harvard’s best chance on the power play went awry when Della Rovere fired a slap shot that caused her stick to split in half and her shot to once again hit the pipe. With eight minutes already gone in the third, it appeared as though the game was destined for overtime. However, the Crimson played by the words its coach told them during the intermission before the third period.

Harvard found its lead thanks to its talented first line. With 11 minutes to go, junior forward Anne Bloomer delivered a pass from senior forward Becca Gilmore into the back of the cage.

“It’s super easy to play with Kristin [Della Rovere] and Becca [Gilmore],” said Bloomer. “I think we all have a good sense of when to pass and when to shoot.”

Bloomer, the team leader in goals, added another one six minutes later to extend the Crimson’s lead to two and bring her season total to 17. Della Rovere sealed the win when she scored off an assist from Gilmore with four minutes remaining.

Dutton, the reigning ECAC goalie of the month, made 21 saves to secure the victory. In the process, she also picked up her seventh straight win in goal.

The 4-1 victory sends Harvard to the Beanpot Championship and gives its the opportunity to win its 12th title, which would be its first since 2015.