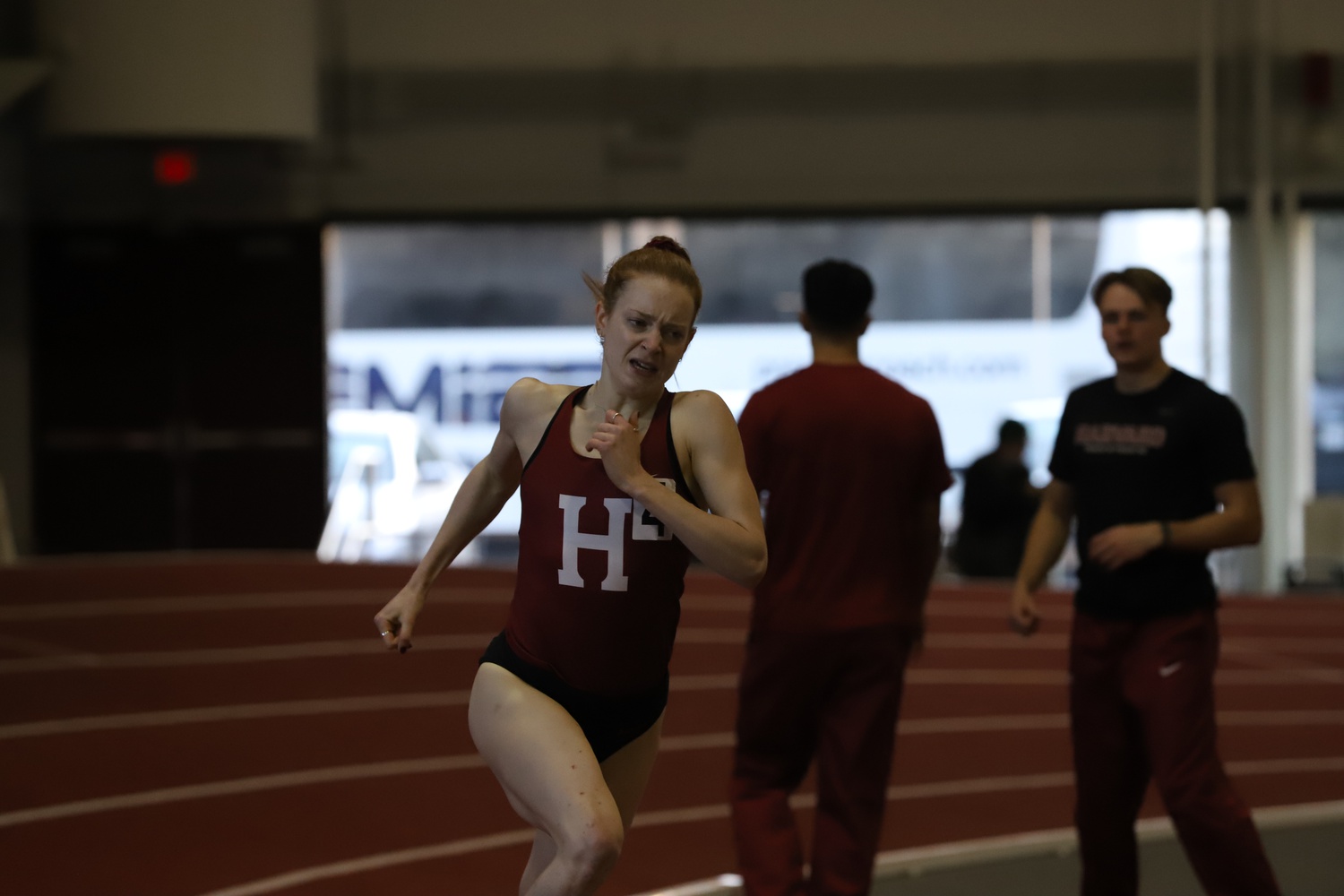 By The Crimson Staff
By William Connaughton

The team split in two this past weekend, competing in both Clemson’s Tiger Paw Invitational and Boston University’s Valentine Invitational. The Tiger Paw Invitational, with a field of 30 teams, included No. 1 Texas, No. 2 North Carolina A&T, and No. 4 Georgia, some of the best programs in the country. The Crimson squad was the only Ivy League representative at the invitational. Nearby at Terrier’s home turf, a Harvard contingent competed against a number of teams, including athletes from Yale, Princeton, Brown and Boston College.

Leading the day for the Harvard men down in South Carolina, sophomore sprinter Lance Ward finished 27th in a heat of 80 runners in the 200m. The Missouri native’s blistering time of 21.28 was fast enough to set the Crimson record in the event, breaking a time set by former Olympian Chris Lambert ’03. Continuing his strong performance, Ward, junior Aaron Shirley, sophomore standout Greg Lapit, and freshman Oliver Murcko broke their own Harvard record set earlier this year in the 4x400m relay with a time of 3:09.36. This finish was good enough for sixth in the event out of 15 teams, with each runner finishing their legs in sub-48 seconds, a notable achievement for the four-man team.

“For highly competitive meets, it’s easy to get caught up in the brand names of schools from the SEC, ACC, Big 12, etc. but the most important thing for us is to remember that we also are a brand name school,” noted junior co-captain and hurdler Aaron Shirley. “It’s important that we approach those meets with the mindset that if anyone in the country knows hard work, it’s D1 Harvard Track and Field athletes. We work hard to race on these big stages and it’s exciting when we see our hard work play off.”

For the women, the Crimson found success in the relay again, with the four-woman team of first-years Egbe Ndip-Agbor, Izzy Goudros, and Victoria Bossong, and junior star Tina Martin completed the 4x400m in 3:38.66, the fourth-fastest time in program history. Amongst strong competition, that finish earned eighth place for Harvard in a field of 22 teams. Finally, in the field events, junior Alana Caroll, fresh off her record-setting performance in the pole vault last weekend, came up just short of her own record with a height of 4.04m. This effort placed tenth in the invitational.

“I love being at Clemson because of the level of competition,” commented senior co-captain and sprinter Jada Jones. “It’s super exciting and inspiring to see as talented athletes as my peers and it has pushed me to do better. I’m always working on staying grounded and focusing on my race but I’m so thankful for the chance to run at places like Clemson.“

Up north in Boston, the Crimson experienced similar success. For the women, distance runners Anna Juul and Maia Ramsden finished in 17th and 18th place in the women’s mile with times of 4:36.66 and 4:36.88 respectively in a heat of over 200 runners. With their efforts, the senior cross country captain and freshman standout posted the fourth and fifth best Harvard performances of all time in the event.

In the men’s events, Harvard continued to stand out in the mile with first-year Ben Rosa finishing in 42nd with a time of 4:04.64 in a field of over 250 runners. In the 800m, junior Will Crisp finished 23rd with a time of 1:51.17. This performance marked the 9th best finish all time in the event for the Crimson. With the top 4x400m team in Clemson breaking the Harvard record down at Clemson, the understudy four-man team of first-years Jonathon Gamarra, Peter Fischer, Steffan Jones, and junior co-captain Max Serrano-Wu had their own record-breaking aspirations. With their 5th-place finish of 3:14.29, the pace was good enough for the seventh-fastest finish all time for Harvard, showing the team’s depth in the event.

Finally, in the 5000m, the distance runners showed off their strength and dominated the event, building on their historic cross country season in the fall. Sophomore Acer Iverson wrote himself into the Crimson history books with a time of 13:32.31, good enough for 30th in the event. Iverson broke the record previously held by multiple-record holder Maksim Korolev ’14 by ten seconds while also setting an Ivy League record in the process. Senior Matthew Pereira and senior cross-country co-captain David Melville put up the third and fifth best times in Harvard history in the event respectively, with first-year Ben Hartvigsen putting up the seventh best time in Crimson history.

Following this pair of invitationals, the Harvard program has two weeks off to prepare for the indoor Ivy League Championships on Feb. 26th and 27th in New York. Shirley stressed the importance of execution going into the meet in two weeks:

“I'd say success for the team looks like perfect execution. Going into championships it’s not about your place, your points, or your competitors, but it’s about how well you are able to execute in your event. We’ve been training for months to get to where we are and the Ivy League Championships is our time to get out there and execute what we know we are capable of doing. If everyone goes into the meet with a goal to execute and rise to their talent and potential, it will be a very successful meet.”