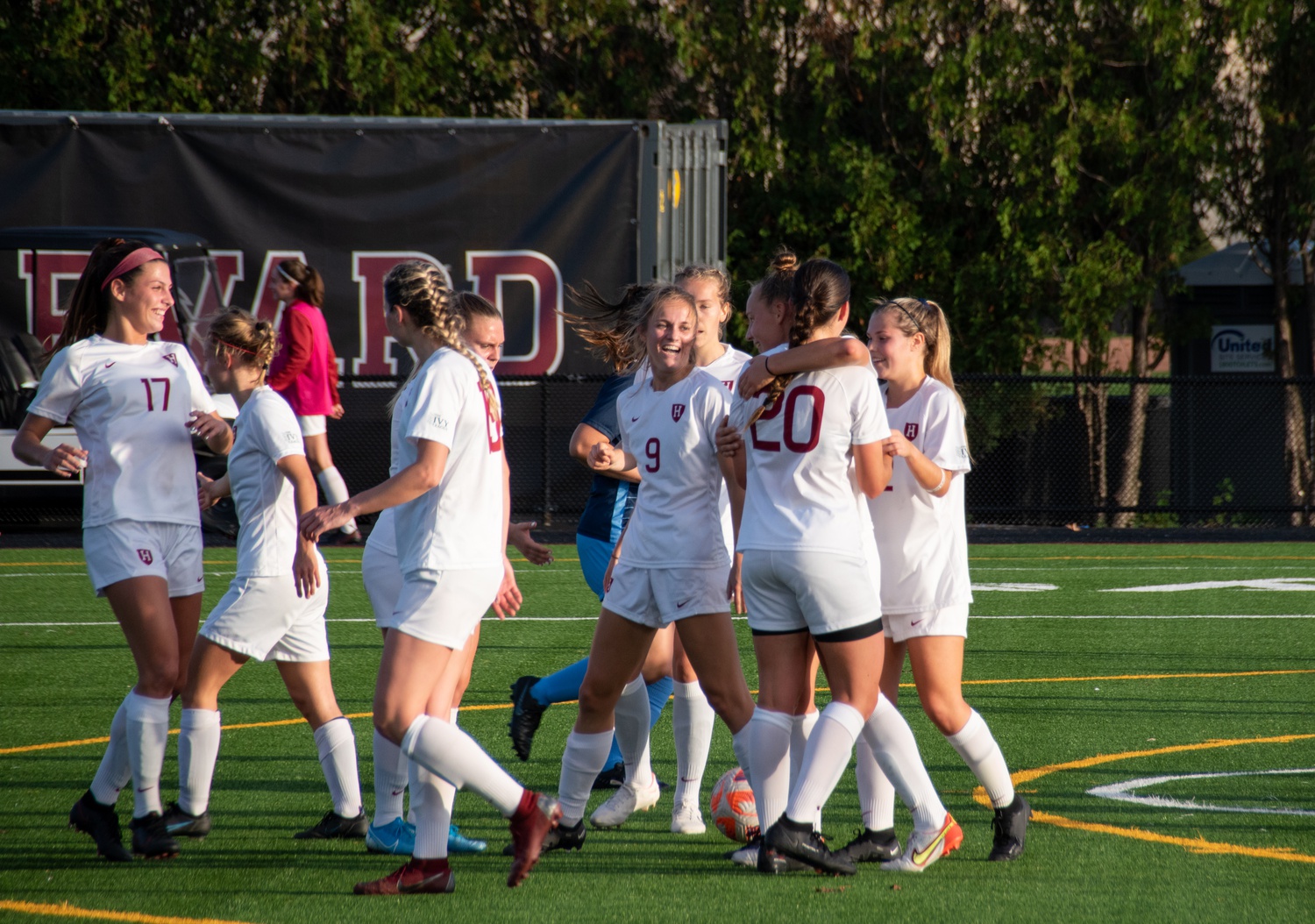 Harvard swarms senior Angela Caloia to celebrate after she scores on an assist from senior Hannah Griffin on senior night. By Zadoc I. N. Gee
By Zing Gee, Crimson Staff Writer

Griffin opened the scoring frenzy against Columbia (7-5-3, 3-3-1 Ivy League) in the eighth minute with a pass from Hasbo before assisting Caloia in the twenty-eighth minute for a 2-0 lead. Hasbo then struck twice in the first fifteen minutes of the second half to put the Crimson up 4-0, with the ball rarely crossing back into Harvard’s defensive territory at times as Harvard maintained possession for a majority of the match. 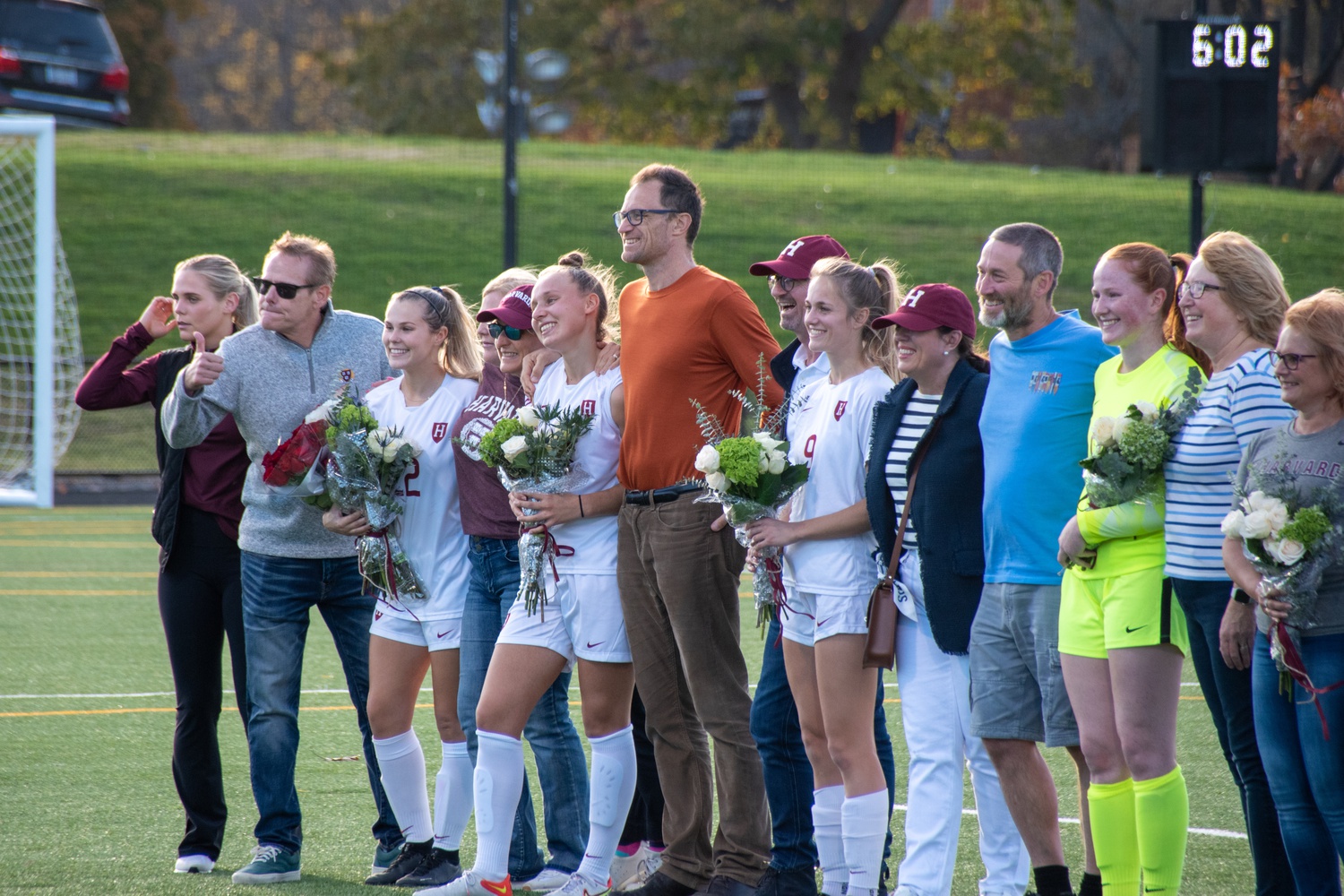 Seniors and their families line the field before the game before playing their final regular season game for the Crimson. By Zadoc I. N. Gee

When the ball did cross into Harvard territory, the defense shone, with sophomore Jade Rose and Schenk pressuring any attacks by Columbia forwards. Gardner’s two saves brought her shutout count this season to four, and Harvard outshot Columbia 22-5. Lung put the 5-0 dagger through the Lions in the seventieth minute to round out the day.

The Crimson (11-1-3, 5-0-2 Ivy League) sits at No. 14 in the RPI rankings and wraps up conference play with a very compelling case to earn an at-large bid to the NCAA DI Tournament when it comes time for the selection show on Monday evening, despite not earning the conference’s auto bid.

The team’s last two conference games prior to Columbia were both thrilling comeback wins, including a 3-2 win at Princeton which saw sophomore forward Ainsley Ahmadian net the game winner in the seventy-eighth minute, and a 2-1 win at Dartmouth after a strike by junior midfielder Megan Mackey in the eighty-third minute. 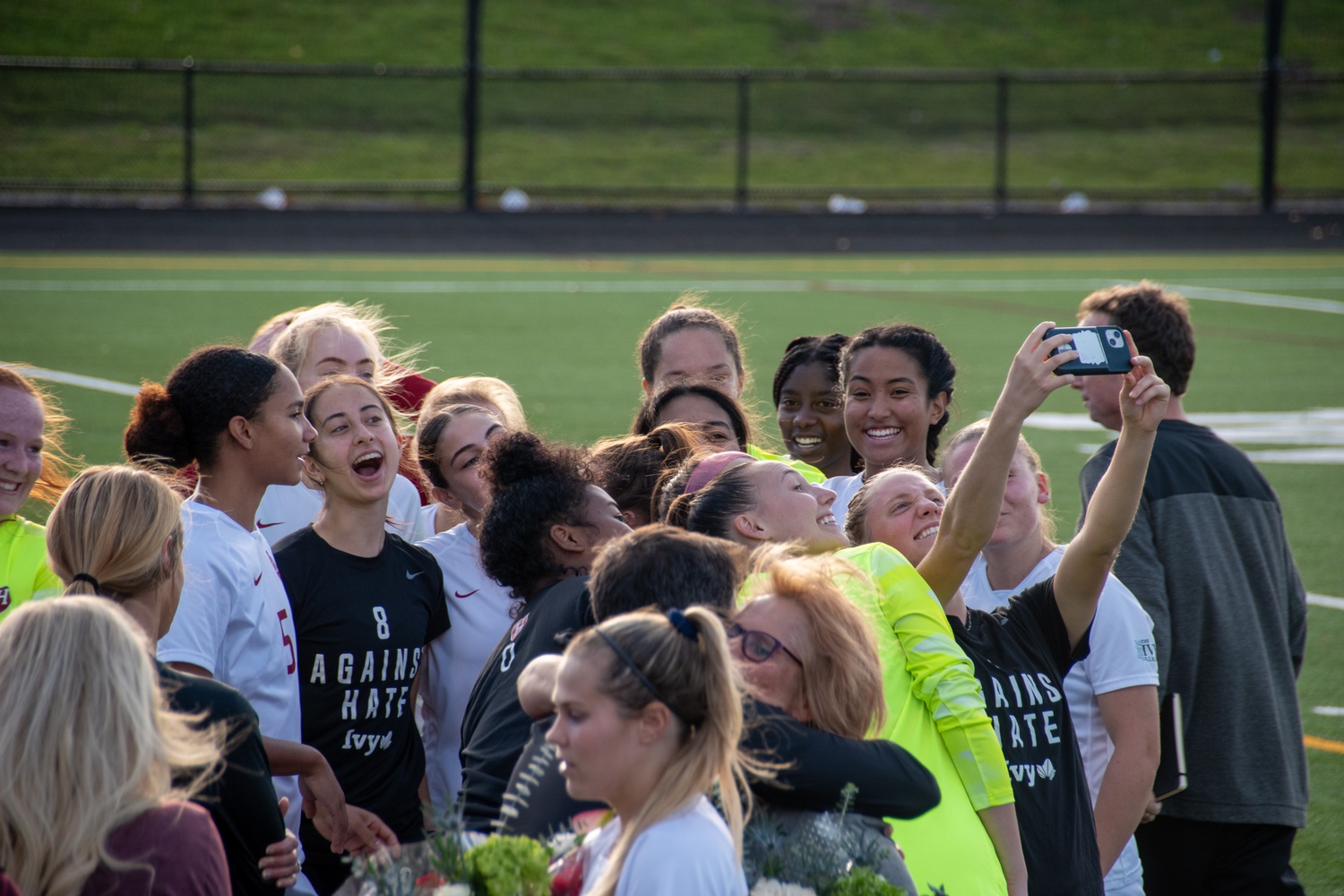 Harvard is all smiles during pregame senior night festivities leading up to kickoff. By Zadoc I. N. Gee

Harvard’s last hopes of the Ivy League title were squashed when Brown’s final contest against Yale was canceled and declared a no-contest after a rise in Covid-19 cases within the Yale program. The Crimson needed Brown (11-2-2, 5-0-1 Ivy League) to lose or tie with Yale to win the conference title (in part because of Harvard’s 1-1 draw with the University of Pennsylvania back in September setting them back in conference standings). 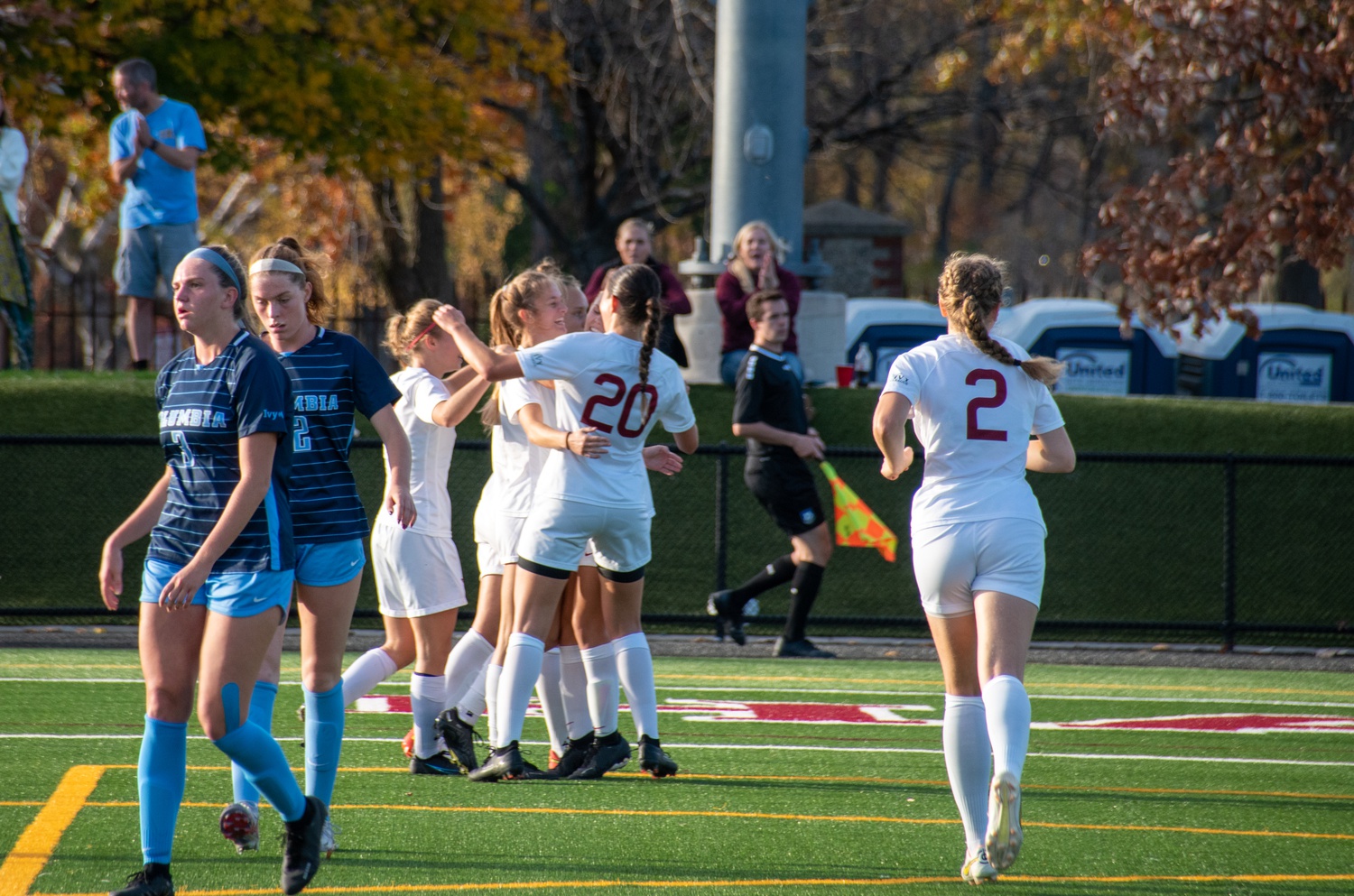 Senior Sophie Hirst hugs senior Hannah Griffin after Griffin scores the first goal of the game in the eighth minute. By Zadoc I. N. Gee
Advertisement

Regardless of the conference title, Harvard’s season has been nothing short of stellar. The Crimson is second in the country in points-per-game at 8.67 and has outscored opponents with an average of 2.87 goals per game to opponents’ 0.80. Harvard wields a deep and balanced scoring attack—Ahmadian, sophomore Hannah Bebar, Hasbo, and Griffin all have sixteen points or more and five or more goals, and while Bebar was out against Columbia and likely will be out for the postseason with a leg injury, the Crimson has depth across all positions and has shown so game after game. 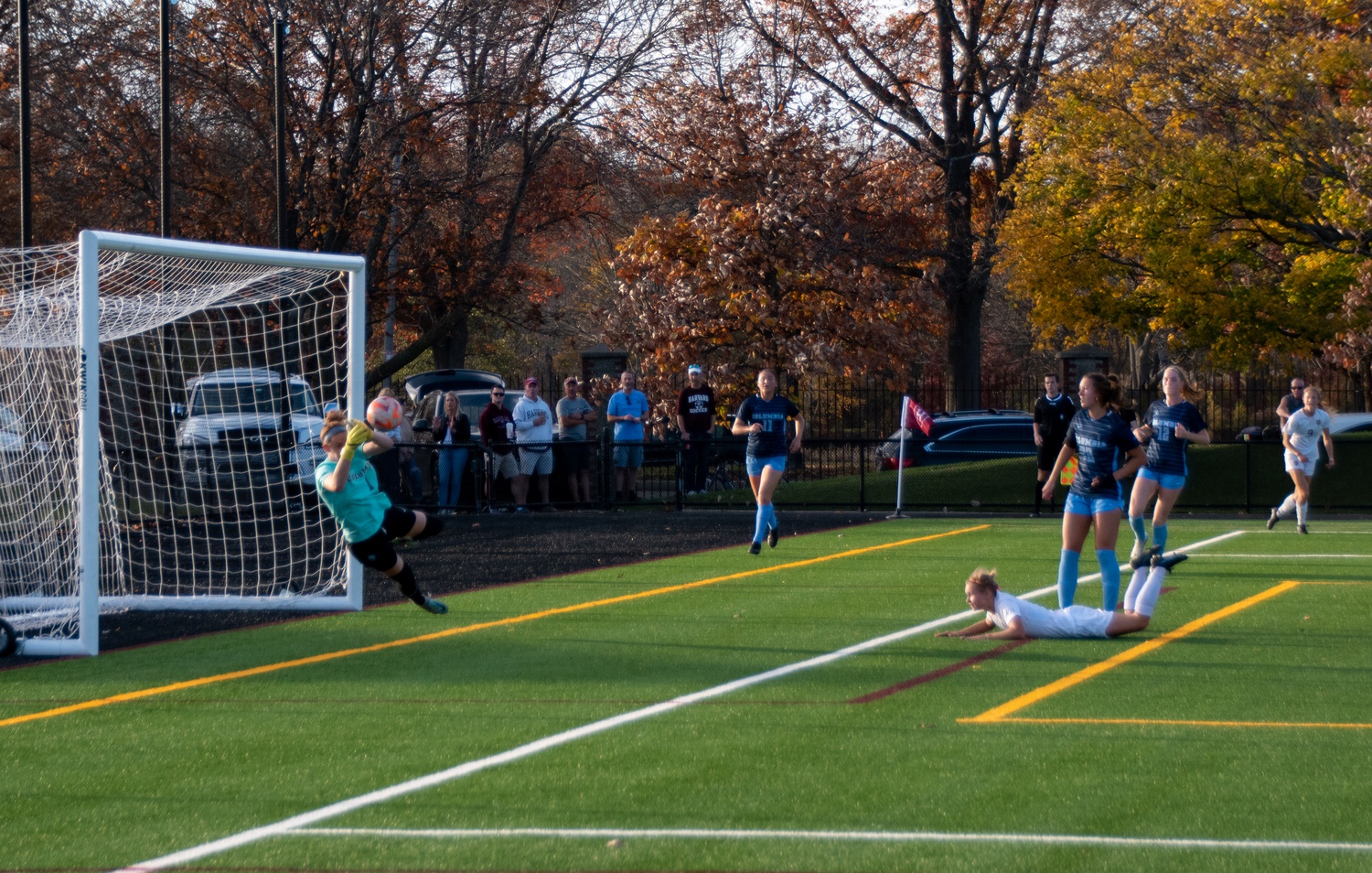 1 - Sophomore Josefine Hasbo's shot sails by Columbia's keeper in the second half. 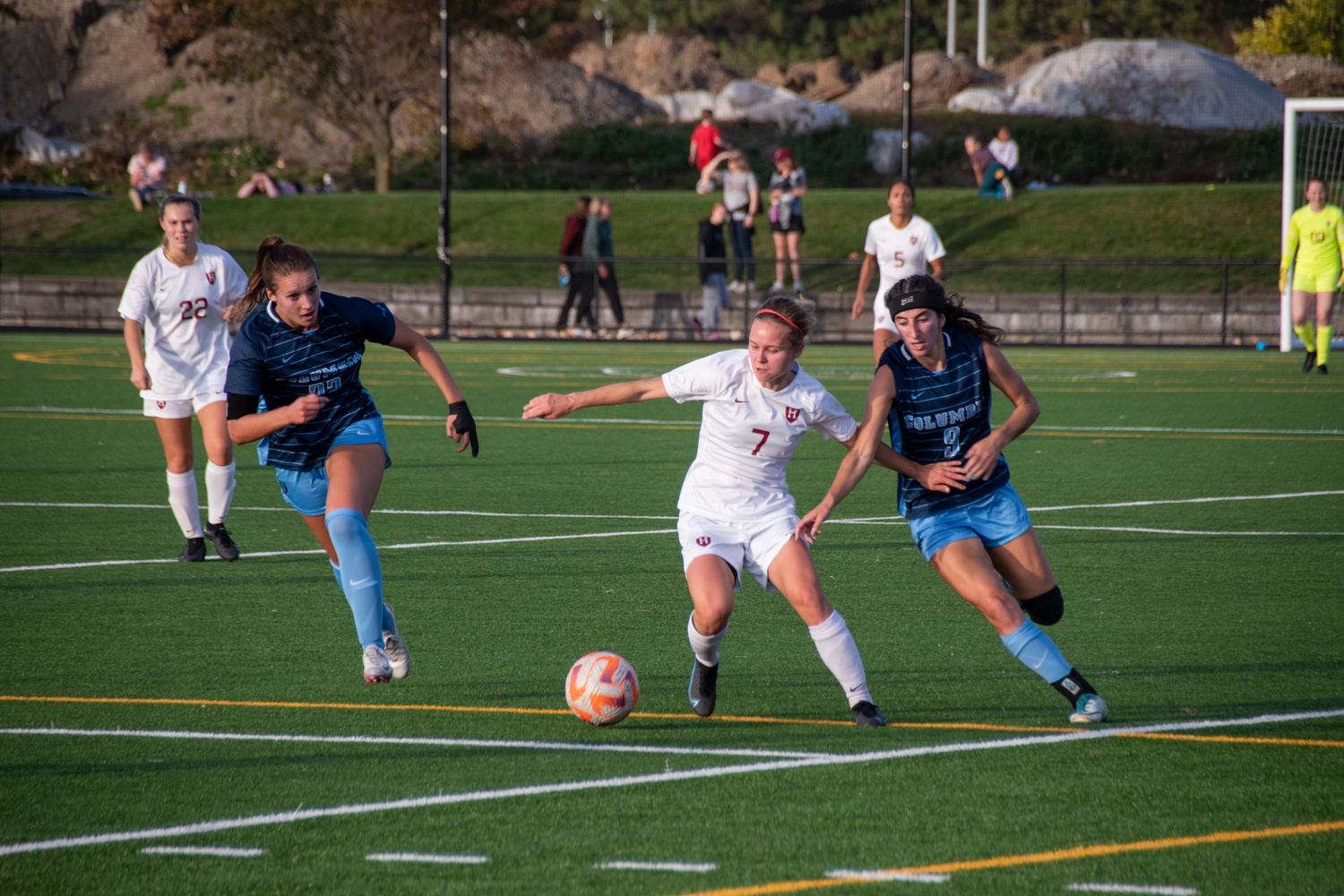 2 - Hasbo battles through contact in the first half. Hasbo finished the contest with two goals and an assist. 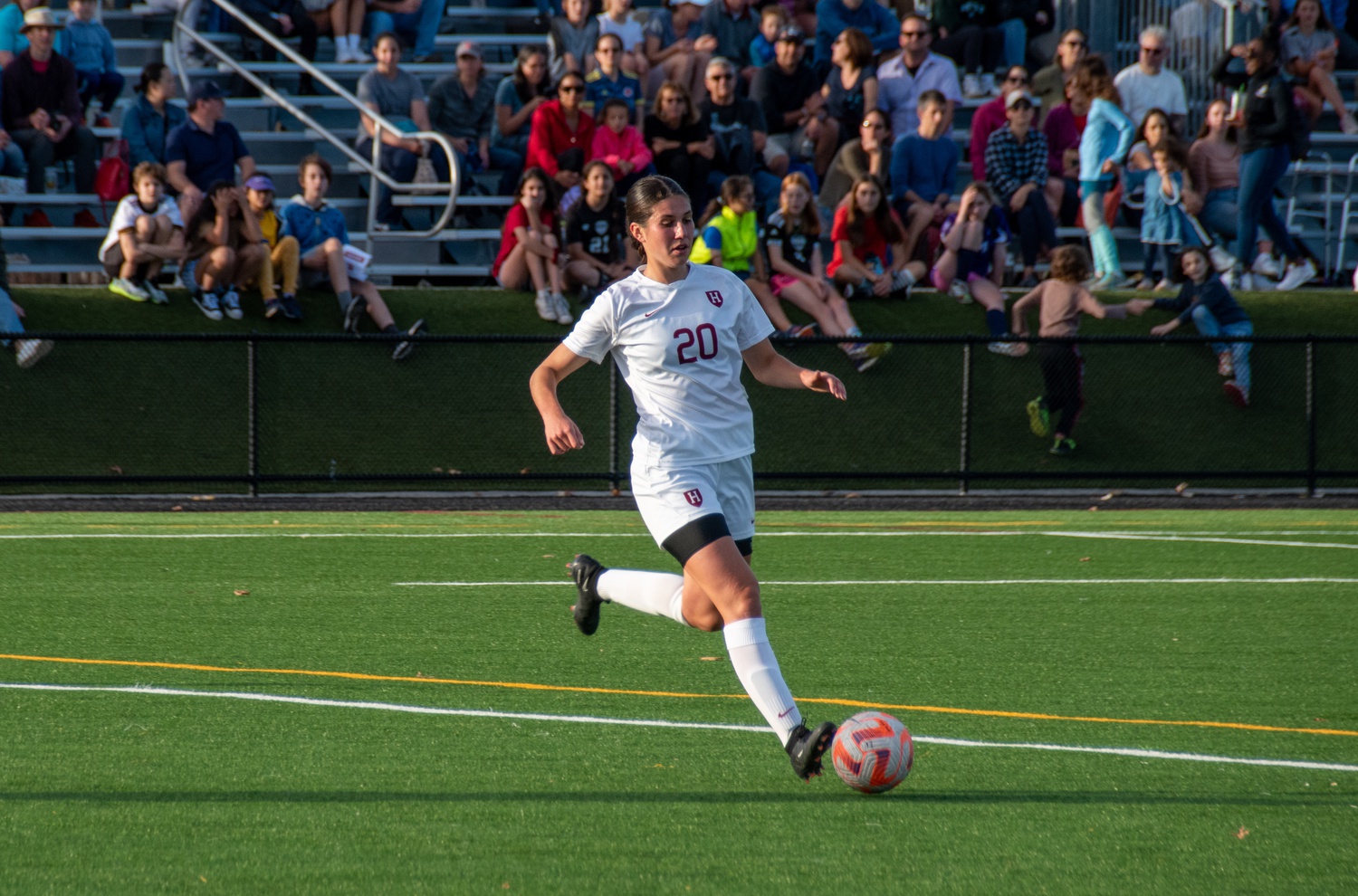 3 - Hirst pushes the ball upfield in the first half. 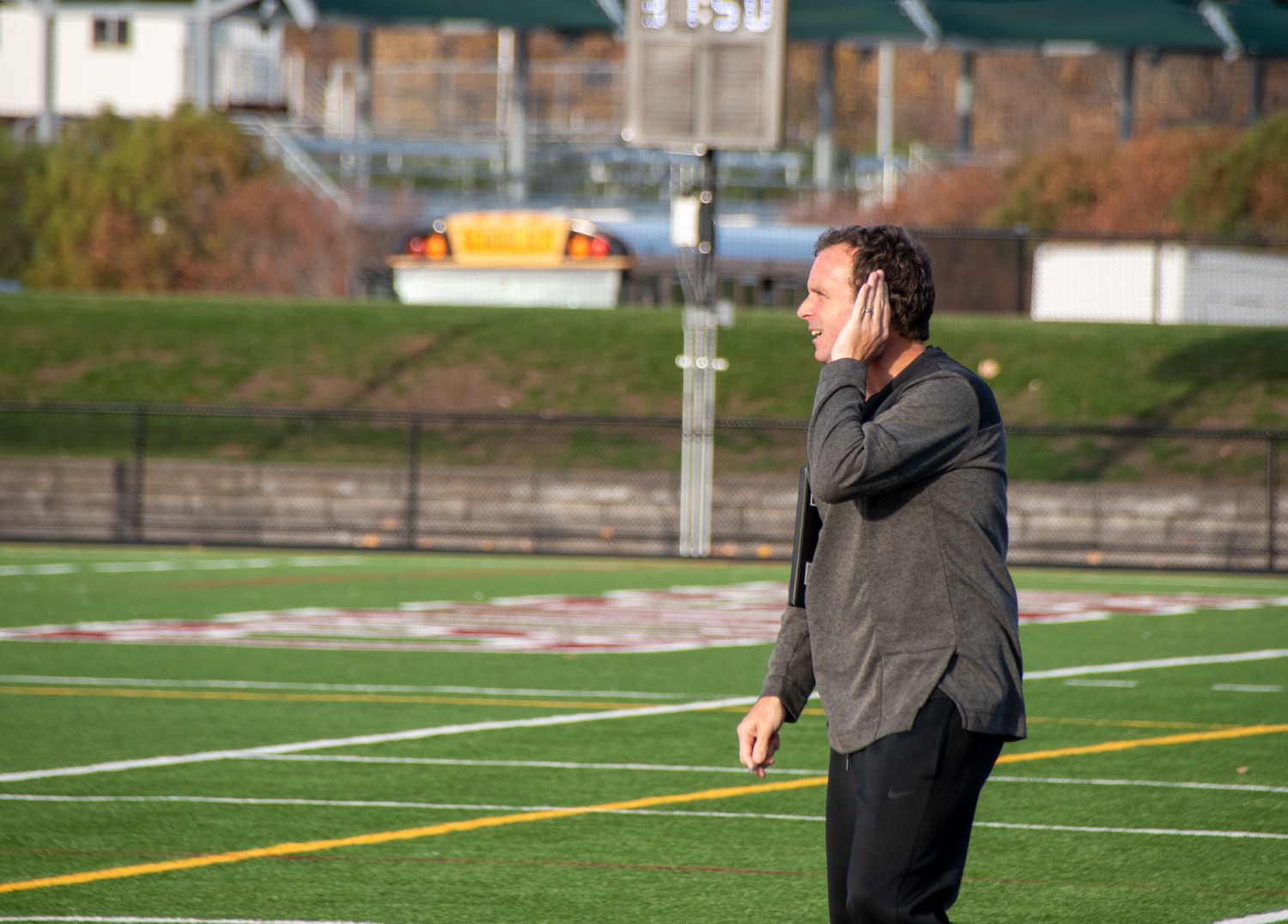 4 - Head coach Christopher Hamblin listens as he communicates from the sideline in the first half.

In the 2022 campaign, the Crimson owns just a single loss to Boston University, and otherwise has been undefeated, with a notable win over then-No. 17 NC State, well-fought draws with No. 17 Texas-Christian University and No. 28 Ivy League rival Brown, and many other dominant performances, leading to the Crimson’s first undefeated Ivy League season since 2016.

Last year, three Ivy League programs advanced to the NCAA tournament—Brown with the auto-bid and Harvard and Princeton with at-large bids, but Harvard ultimately fell to Wake Forest in the first round. This year the program hopes to return to the big dance and perform against top competition, and the team and Crimson faithful eagerly await their fate for postseason scheduling and will find out the bracket at the selection show on Monday, November 7 at 4:00pm.

— Crimson staff writer Zing Gee can be reached at zing.gee@thecrimson.com