Women’s Soccer Falls to South Carolina 3-2, Concluding Season After Advancing to Second Round of NCAA Tournament 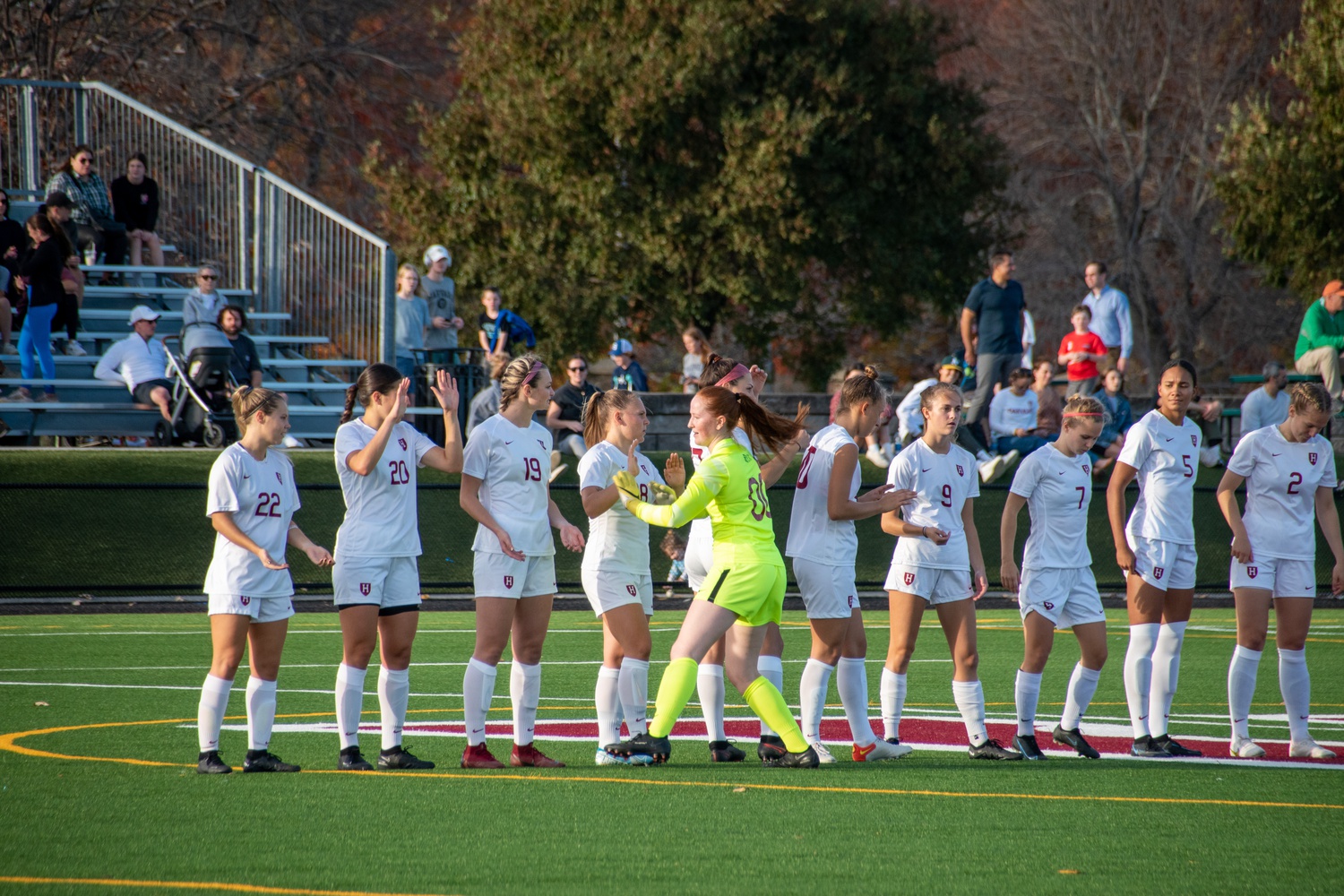 The Crimson’s NCAA Tournament run came to a close on Friday, November 18 in Durham, N.C. as it fell 2-3 to a strong University of South Carolina squad after a late comeback surge fell short. Prior to the South Carolina game, they dominated the University of New Hampshire in a 2-0 victory in the first round of the tournament at home on Jordan Field in front of a packed house of a thousand fans.

“To see the team respond positively and always believe and keep the faith was such great evidence of the growth the team made during the year,” head coach Chris Hamblin said. “It was a real belief that we could get back in this game even at 3-0 down against a top-15 team in the country…I think that was such a strong statement that the team made…no matter what the scoreboard says, we’re still in the game until the final whistle.”

The loss wraps up a successful season for Harvard (12-2-3, 5-0-2), who won their first NCAA Tournament game since 2014, finished second in the Ivy League after being narrowly edged out by Brown, and earned a No. 6 seed in the tournament, ranking them among the top twenty-four teams in the country.

Harvard almost capped off what would have been the most incredible comeback in recent memory. Entering the last ten minutes of the game 0-3, the Crimson fired off two quick goals but were unable to net a third for a tie.

With just nine minutes to go, Harvard got its first score of the game when a shot from junior Taylor Fasnacht deflected off a Gamecock defender for what would go down as the second own-goal of the night, injecting a bit of spark into the Crimson’s offense, which was still down 1-3.

The game continued to heat up with Crimson momentum when, six minutes later, senior co-captain Jordan Di Verniero scored off the corner kick assist from sophomore forward Àslaug Gunnlaugsdóttir, intensifying the atmosphere a bit more. The Gamecock defense held out for the next three minutes to end the game 3-2 in favor of South Carolina, after a hard-fought contest from the first whistle.

The Crimson started at a disadvantage after an unfortunate own-goal in the third minute on a passing error and miscommunication, but the team kept composure and responded by applying early pressure and finding a great look when a shot from senior forward Angela Caloia nailed the crossbar in the tenth minute.

“It wasn’t great defensively for us in the first half but we actually played well…I was so proud of the way the team responded and kept fighting, kept digging in, and in the end we managed to get back in the game, we just ran out of time,” Hamblin said. “So, it was really, you know, a tough way to go out, but we never gave up, and I think it was just such a good indication of the program and the locker room and the never-say-die mentality.”

South Carolina junior Catherine Barry was the standout for the Gamecocks, scoring her first of two goals on the day in the twenty-second minute, bringing the lead to 2-0 and applying more pressure on the Crimson.

Harvard had a good look on a great over-the-top through ball from sophomore midfielder Josefine Hasbo in the thirty-eighth minute to junior Smith Hunter, but South Carolina’s senior goalkeeper Heather Hinz won the footrace to the ball in front of the net.

Three minutes into the second period, Caloia rocketed a free kick on target but it was deflected away by Hinz, and the game went scoreless for the next thirty-eight minutes until the aforementioned late-game excitement.

Harvard, invigorated by its fans and home turf, showed dominance early in the game against the Wildcats and maintained it throughout, controlling possession for 70% of the match and finishing the game 2-0.

Di Verniero set the tone and lifted Harvard to 1-0 in the ninth minute when she finished a beautiful cross from Gunnlaugsdóttir. It was the first goal of the season for the senior captain, coming at one of the most opportune moments in front of a huge crowd at Jordan Field.

“Both Ava and Jordan were phenomenal for us this year as captains, and managed so many minor, minor pieces as well as the big pieces to put us in a [good] position,” said Hamblin, reflecting on Di Verniero’s and senior co-captain Ava Lung’s contributions this season, after complimenting Di Verniero’s play.

Senior midfielder Hollyn Torres booted a beautiful left-footed shot that wrapped and arched over the New Hampshire goalkeeper Cat Sheppard to go up 2-0 in the thirty-third minute, on the assist from senior forward Hannah Griffin. Harvard kept Sheppard busy, outshooting the Wildcats 25-5 on the day.

“It was a really proud moment for the team to know that we would be hosting and that we earned the opportunity to be a seed…that was an incredible honor,” said Hamblin, reflecting on the home-field advantage and atmosphere for the first round game. “It was awesome to see such a great turnout … the team stepped up and performed really well.”

The game against South Carolina marked the last time seven seniors will take the field for the Crimson, a bittersweet ending. Hirst, Schenk, Di Verniero, Griffin, Caloia, Torres, and goalkeeper Hannah Gardner will graduate either this upcoming fall or spring, after phenomenal careers at Harvard. Hirst, Schenk, and Di Verniero were first-years on the 2018 squad that went 7-7-1, before contributing with the rest of the current seniors to the turnaround that saw Harvard go a combined 36-8-5 over their next three seasons, with two NCAA Tournament appearances.

Now, the team is on a much-deserved break before resuming offseason practices, which also includes three or four games in the spring, and plans for a trip to play in Europe.