2018: When Harvard Beat the Bulldogs in a Ballpark 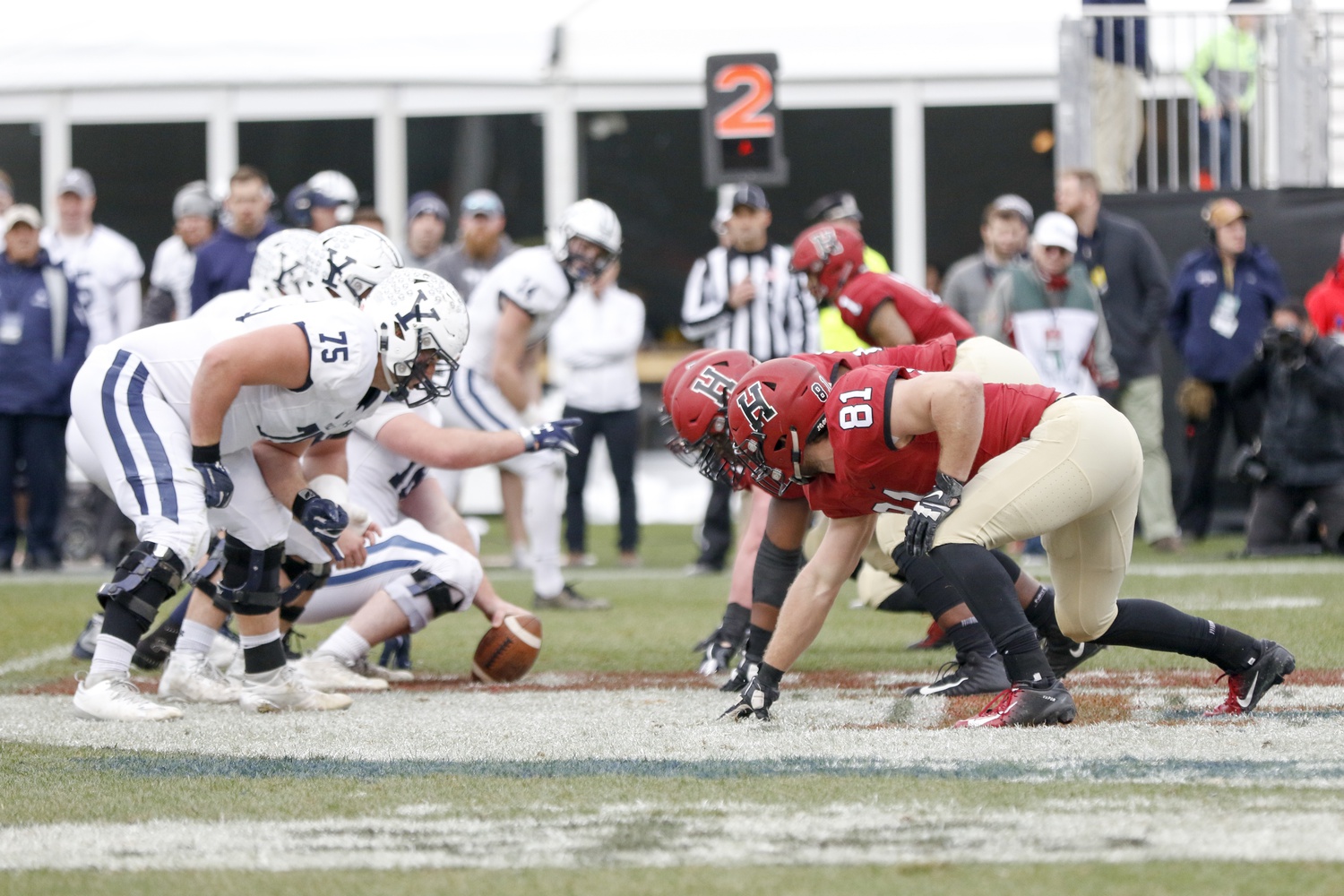 The Harvard defensive line prepares for a snap in a 45-27 win over Yale at Fenway Park on Nov. 17, 2018. By Timothy R. O'Meara
By Thomas Harris, Crimson Staff Writer

On Nov. 17, 2018, Harvard football took on Yale in the 135th iteration of The Game. But for the first time since 1894, The Game was played in neither Cambridge nor New Haven. Instead, it was played at historic Fenway Park, home to the Boston Red Sox since 1912. The 34,675 fans in attendance witnessed a historic performance by both squads, as the game marked the most combined points of any Harvard-Yale contest. After a gritty, physical 60-minute battle, it was the Crimson who came out on top, 45-27.

Before the game, there were mixed emotions about having the game at Fenway, given the rich history of the rivalry at Harvard Stadium, but as the day wore on, those concerns quickly whittled away.

“To be perfectly honest, I was not initially excited to lose the opportunity of a true home game here at Harvard Stadium after so many of the great games had been played here,” head coach Tim Murphy said. “Having said that, after going through the Fenway experience, it really becomes a no brainer. It was unique from the flyover to the loud, very much invested Harvard crowd. As a once in a while experience, it’s just tremendous.”

While it was a special day for the veteran head coach, it was even more powerful for some of the players, especially for Boston natives who had grown up watching the Red Sox. Safety Mike Silva ’21, then a first-year, was one player particularly affected.

“It was extremely special,” he said. “I’m a Boston-born and raised guy, on the South Shore. Having been to Fenway Park plenty of times for baseball games, seeing it and playing on it as a football field was a very special moment.”

Beyond the flyovers and fanfare, the game at Fenway was more than just a spectacle. The back-and-forth affair featured exciting drives and spectacular defense. Neither team held more than a one-touchdown lead until midway through the fourth quarter, when the Crimson found the end zone for the first of its two fourth-quarter scores to put the game away. It also featured a bizarre penalty; then-sophomore running back Devin Darringon ’21 looked to have scored a touchdown that would have given Harvard a 34-27 lead in the fourth quarter, but it was called back after it was revealed that Darrington made an obscene gesture towards a Yale defender as he ran into the end zone. 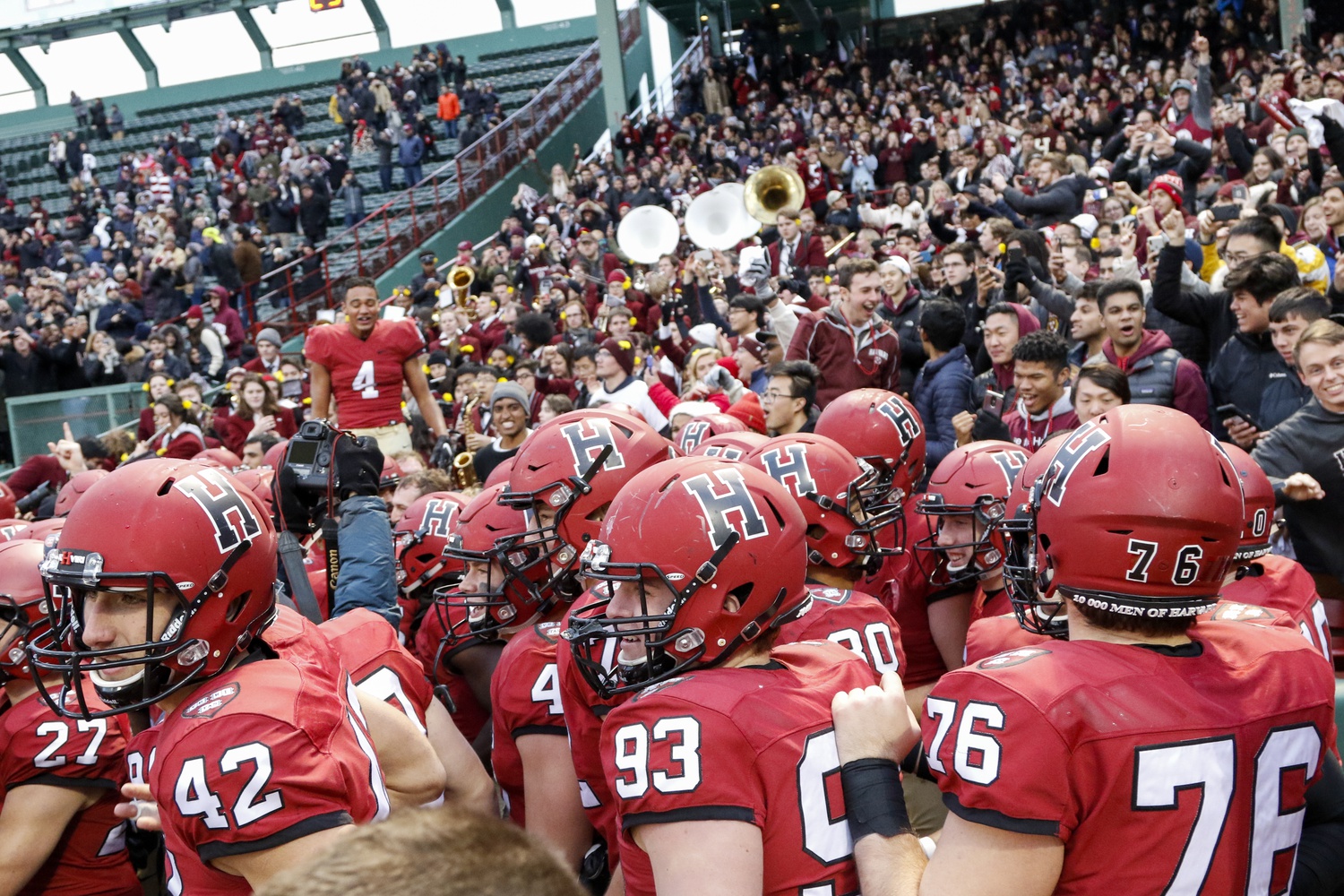 The Harvard football team hypes itself up before a 45-27 victory over Yale on Nov. 17, 2018 at Fenway Park. The game turned out to be an unforgettable affair. By Timothy R. O'Meara

“It was such an exciting game that brought out the best in our team and our players,” Murphy said. “The hiccup by Devin Darrington that cost us a touchdown, and the team had to overcome that. But Devin had the opportunity to score again. There were some really clutch throws that Tom Stewart and a couple of our receivers made, but it was just an amazing experience.”

It was a game of memorable plays, from Darrington’s blunder to Tyler Adams ’21’s 62-yard touchdown run early in the second quarter to Darrington’s 16-yard, fourth quarter run to extend Harvard’s lead to 18 points and cap off a strong sophomore season. But the play that stood out to the winningest head coach in Ivy League history was Zach Miller ’19’s interception late in the fourth quarter to seal the victory. For Miller, who was serving as the 145th Captain of Harvard Football that season, it was the capstone on a stellar Harvard career.

“It's hard to pick a favorite play in particular, plays are like children,” Murphy said. “That being said, seeing the interception by our captain to really end the game, and the overwhelming joy that it set off on our sideline and throughout the Harvard faithful Fenway park. I’ll never forget that. As a coach, it’s never over till it's over, but that place went pretty much nuts.”

There was no guarantee that Silva, as a first-year on a veteran-led squad, would see playing time in The Game. But the safety not only got on the field, he also made a huge play, recording a pass defense on a third-down play near the start of the fourth quarter.

“My situation was crazy,” Silva said. “I did not think I was going to step on the field that game. So I was just trying to live in the moment and be excited to actually be on the field, have as much confidence as I could, and I was able to break up a big pass on the third down early in the fourth quarter.”

For many players, the most special part of that game was right after it ended, when the stands emptied to allow fans onto the hallowed grounds.
“There’s videos and pictures of us just running across the field, screaming, yelling and sprinting towards our fans,” Silva said. “That was the most insane experience ever, because there were a hundred of us in our student section. Food was getting thrown in the air and everybody was going nuts. Once we got back to the locker room, [Ben Abercrombie] was already waiting for us there, and all the alumni got in the locker room so we got to celebrate there. Even just being in the Red Sox locker room was an amazing experience, let alone celebrating the Harvard win.”

Owing to the history-making offensive performances by both teams, the drama of the game itself, and its unique setting, the 2018 contest quickly joined the annals of legendary Harvard-Yale contests. Perhaps the single most famous edition of The Game came half a century earlier, when the Crimson launched a furious comeback to manage a 29-29 tie in the 1968 matchup, but the 2018 game is sure to be remembered by future generations of Harvard football players.

“We have had so many great games,” Murphy said. “For instance, in 2005, when we beat Yale in triple overtime, the all-time leading rusher in Harvard football history, Clifton Dawson ’07, took it into the endzone. And the game in 2021, when we had to win it in the last 40 seconds of the final quarter. There are so many great memories of the Harvard-Yale game, but I think this is one for the history books on many levels.”

Because the 2020 edition of The Game was canceled by the Covid-19 pandemic, Saturday’s matchup at Harvard Stadium will mark the first clash between the two teams in Massachusetts since 2018, and the first in the Crimson’s home venue since 2016. Reflecting on the 2018 contest, Murphy noted a main takeaway that he hopes his team will bring onto the field this weekend.

“Even though we have won…16 of these in the 21st Century, there is no such thing as a favorite in this game,” he said. “You’ll think you have seen it all until you watch a Harvard-Yale game.”

—Staff writer Thomas Harris can be reached at thomas.harris@thecrimson.com.