A lifelong academic and public servant who would go on to serve as the 25th Defense secretary under President Barack Obama, Ashton B. Carter died on Oct. 24 in Boston after suffering a heart attack. He was 68.
By Miles J. Herszenhorn 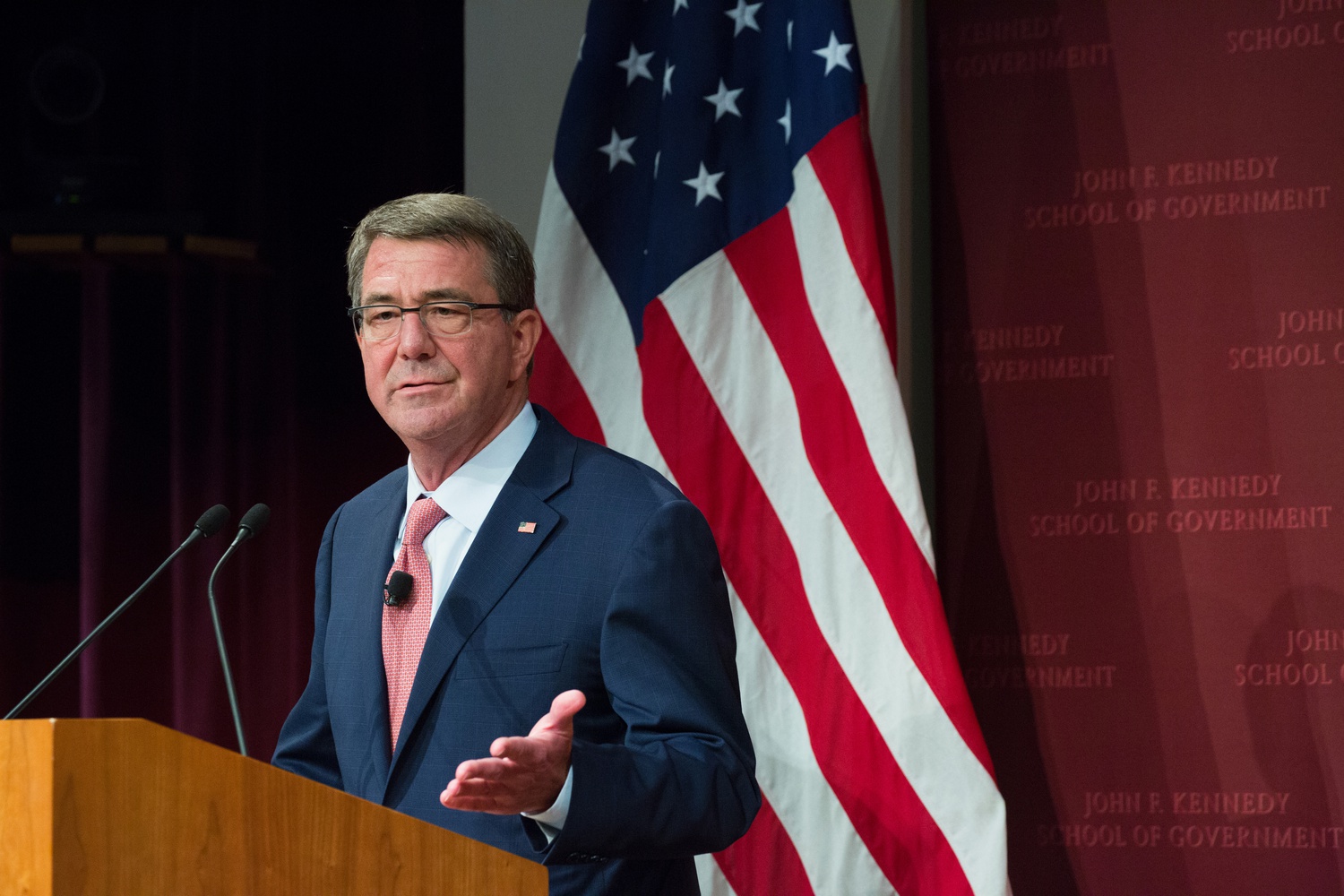 Ash Carter, who served as Secretary of Defense in the final two years of the Obama administration, opened military combat jobs to women and ended a ban on transgender people serving in the military. By Courtesy Photo

Like many second-year public policy students at the Harvard Kennedy School, Bethan M. Saunders was nervous about finding someone to serve as her policy analysis exercise advisor. But she also had a dream candidate in mind: former U.S. Defense Secretary Ash Carter.

At the start of the fall semester, Saunders spotted Carter walking down a hall in the Kennedy School and chased him down, shouting, “Professor Carter, Professor Carter.” After chatting about their summers, Saunders told Carter about an idea she was really excited about for the policy analysis exercise — and eventually worked up the courage to ask him to serve as her advisor.

“‘Yes, of course. I’d be happy to,’” Saunders recalled him saying, leaving her “in complete shock.”

“I was so excited to be working with someone who had such important insights and experience, and really a brilliant scholar and public servant,” Saunders said. “And in hindsight, I shouldn’t have been surprised at all because he cares so much about students, and is incredibly dedicated to developing future leaders, future public servants.”

A lifelong academic and public servant who would go on to serve as the 25th Defense secretary under President Barack Obama, Ashton B. Carter died on Oct. 24 in Boston after suffering a heart attack. He was 68.

‘A Totally Normal Kid’ Who Was ‘Destined for Big Things’

Carter was born in Philadelphia on Sept. 24, 1954, the youngest of four children born to William and Ann Carter. A graduate of Abington Senior High School, he studied at Yale University before attending Oxford University as a Rhodes Scholar.

Cynthia DeFelice, one of Carter’s older sisters, said it took her a while to “catch on to the fact that Ash was really different and destined for big things.”

While Carter is universally described by friends and colleagues as exceptionally smart, DeFelice maintains that he was “a totally normal kid.”

“He is, at heart, just a goofball,” DeFelice said. “Nobody could make me laugh like my brothers. And my husband would walk in the house and he’d be able to tell that I was talking to Ash, or my brother Chip when he was alive, just by my laughter.”

But his multidisciplinary intellect always shined through. As an adult, she said, he did calculus problems to relax.

“Just recently he had ordered a whole bunch of calculus and physics books to relax with on vacation,” she said.

Carter started his career in the Department of Defense in 1981, just two years after he received his Ph.D. Three years later, he started teaching at Harvard University after he was hired by then-HKS Dean Graham T. Allison ’62 to work as an assistant professor. For much of the next 38 years, Carter would spend his career oscillating between teaching jobs at the Kennedy School in Cambridge and serving in the Defense Department in Washington. 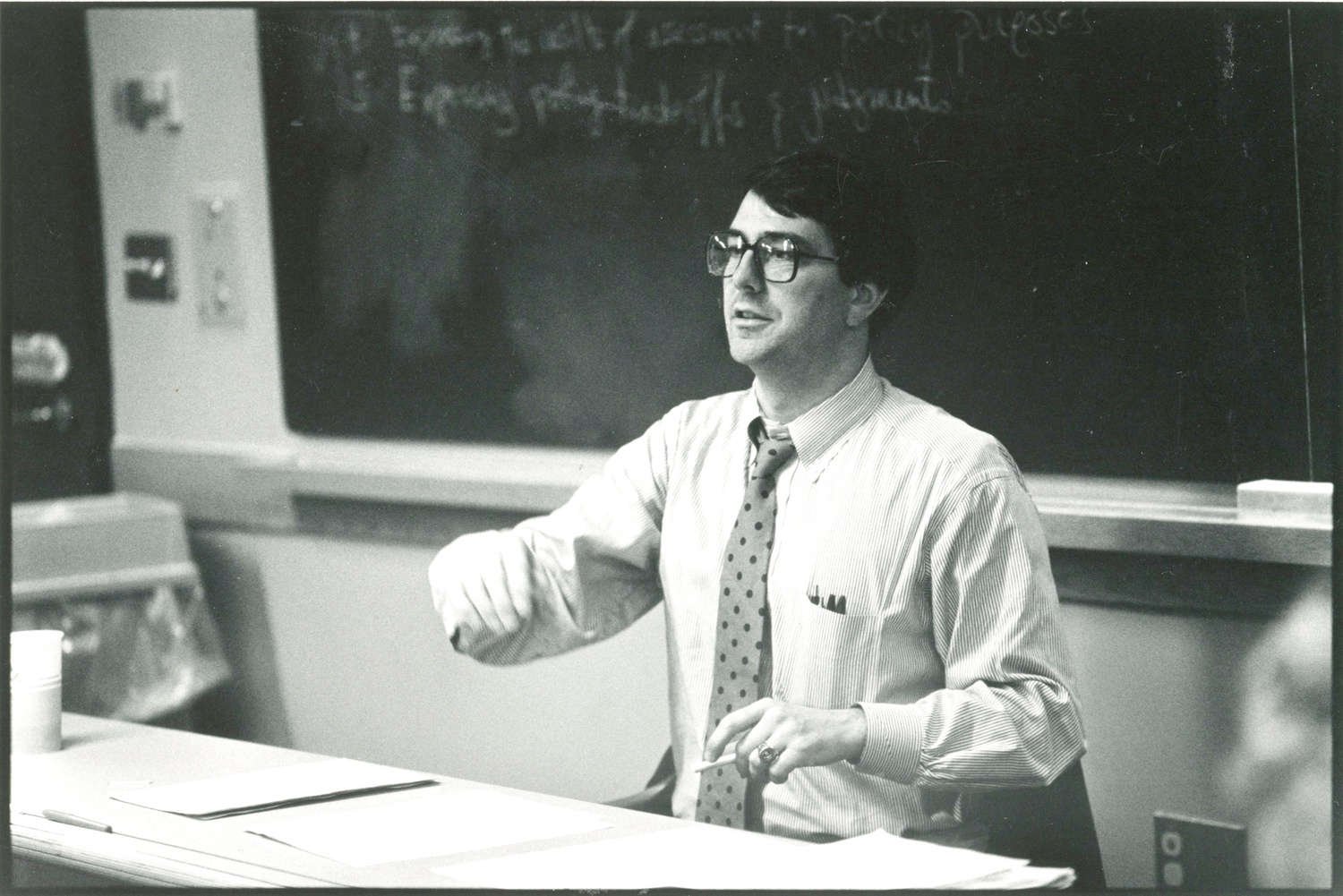 Ash Carter quickly rose through the ranks at the Harvard Kennedy School. By Courtesy of Martha Stewart

Allison said Carter was “laser smart and really driven by ambition to try to make a difference in the world.” But he added Carter’s brilliance could also make him “anxious — awkward even, many times abrasive, actually, when he was younger — because he was super smart and often dealing with people who didn’t get it.”

At first, it was uncertain if Carter would succeed at the Kennedy School, Allison said, as the school’s initial attempts to focus more on nuclear science and technology were met with skepticism from faculty members. But Carter proved his versatility as a professor, choosing to teach a statistics course in the core curriculum despite his training as a physicist.

“If Ash put his mind to doing something, he could do it,” Allison said.

Carter quickly rose through the ranks at the Kennedy School, becoming the director of the school’s Center for Science and International Affairs in 1990. A year later, following an attempted coup against Soviet Union President Mikhail Gorbachev, Carter formed a working group at HKS that sought to identify a strategy to maintain control over Soviet nuclear weapons in case the country collapsed. 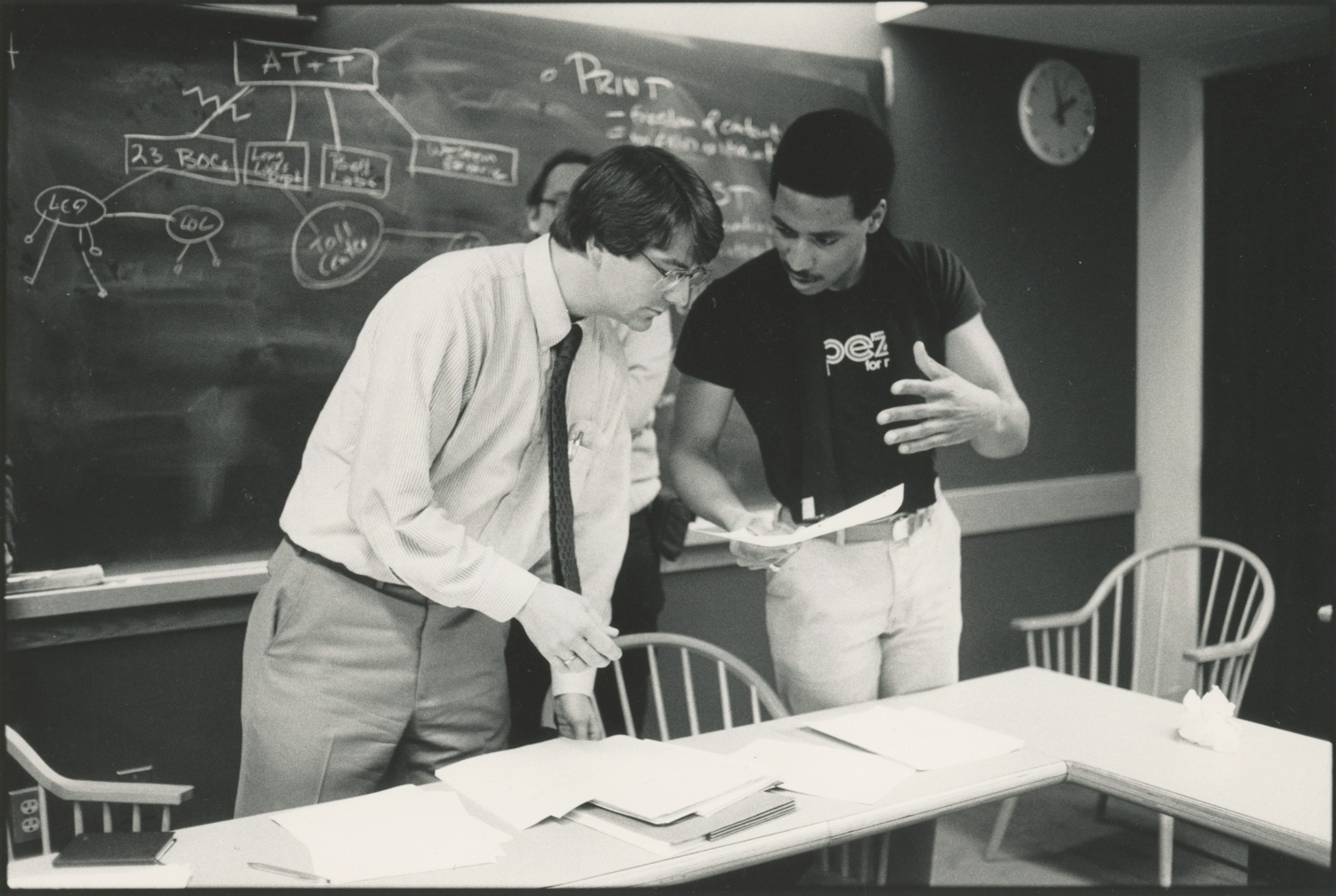 Carter graduated from Yale College in 1976 with degrees in medieval history and physics. By Courtesy of Martha Stewart

Alongside Steven E. Miller, who currently runs the International Security Program at HKS, Carter authored a monograph titled “Soviet Nuclear Fusion,” which served as their initial answer to that problem. Carter then traveled to Washington, where he successfully lobbied Senators Richard G. Lugar and Samuel A. Nunn to pass legislation inspired by the work.

There were thousands of nuclear weapons left outside of Russia after the Soviet Union collapsed, and it was nearly certain that some of them would end up on the international black market, Allison said.

“What in the world does that look like? So that looks like 9/11 with a nuclear bomb,” Allison said. “And a nuclear bomb — or two, or a dozen — exploding in cities like New York or Boston.”

The afternoon after President Bill Clinton was inaugurated in 1993, he invited Allison to the White House for a meeting where he asked him and Carter to serve in the Defense Department. His administration later implemented their strategies for disarming the former Soviet Union.

R. Nicholas Burns, who currently serves as the U.S. ambassador to China, wrote in an email that he worked with Carter to seek “new relationships” with Russia and Ukraine “at a very different time in history.”

“We worked closely together in the Clinton Administration on U.S. efforts to forge new relationships with Russia and Ukraine after the end of the Cold War and dissolution of the Soviet Union and Warsaw Pact,” Burns wrote. 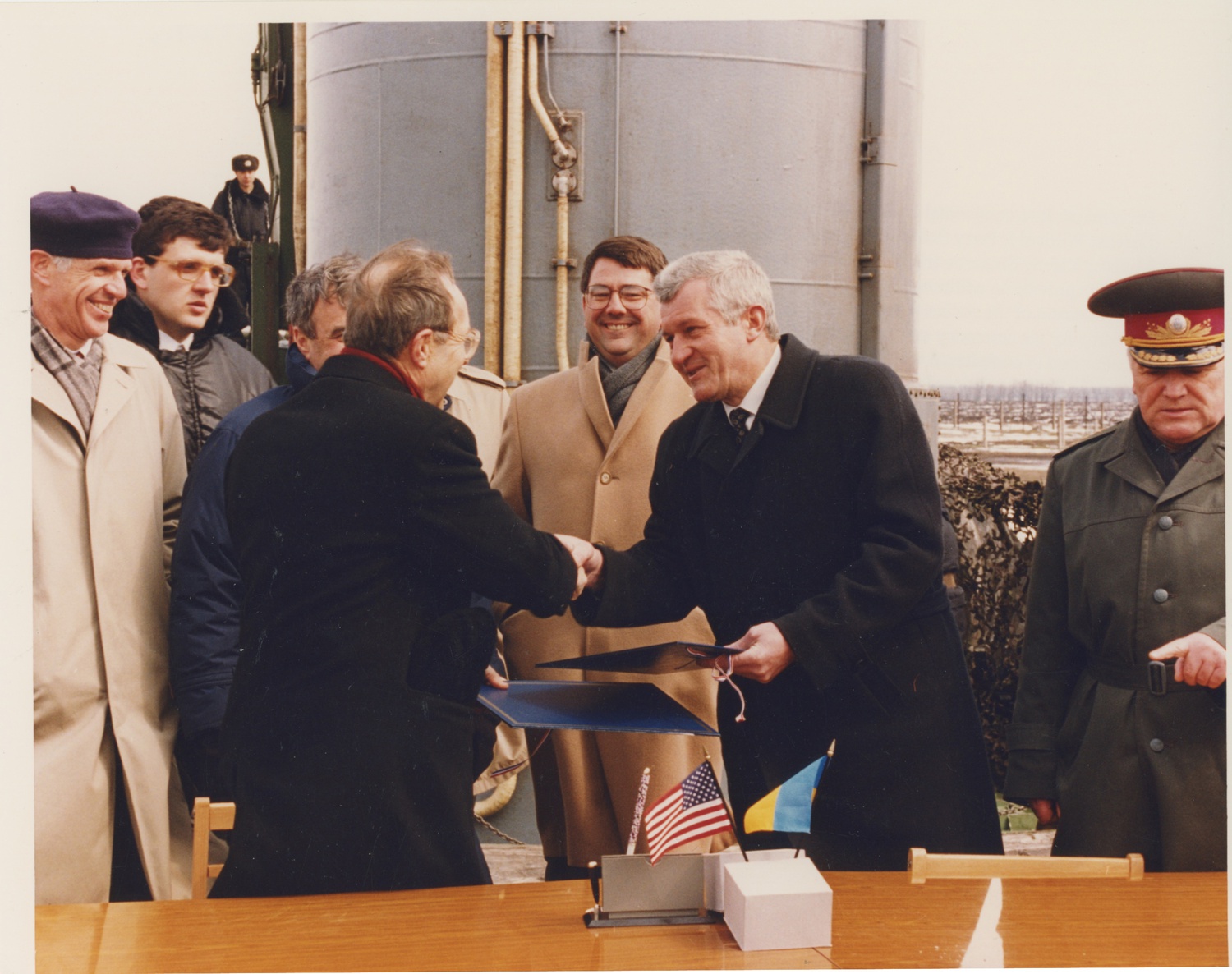 Carter served as an assistant secretary of Defense in the Clinton administration from 1993 to 1996. He returned to Harvard in 1997, but 12 years later, after Obama was elected, Carter moved back to Washington to serve in the Defense Department again, this time as an undersecretary.

‘Nobody Is Going to Replace Ash Here’

When Carter served in the Obama administration, he had one practice that he took very seriously: He frequently visited troops at the Walter Reed National Military Medical Center, at a time when hundreds of American soldiers were dying in Afghanistan each year.

Eric B. Rosenbach, who served as Carter’s chief of staff during his time as Defense secretary, said Carter and his wife, Stephanie, “at least once every month, sometimes every weekend, would go and visit folks” at the military hospitals.

In 2015, Obama asked Carter to be the first senior U.S. official to meet with then-Israeli Prime Minister Benjamin Netanyahu after the Iran nuclear deal was sealed. In a tense meeting, Netanyahu proceeded to "give Ash the business” about how the deal posed a threat to Israel’s very existence, according to Rosenbach.

But Carter, who attended high school three miles away from Netanyahu’s alma mater, Cheltenham High School, had a trick up his sleeve to diffuse the tension.

“About 25 minutes into Netanyahu chewing it out, Ash says, ‘You know, Mr. Prime Minister, that’s all fine, but I want you to understand that at least my high school beat your high school in soccer the year that you were a senior,’” Rosenbach recalled.

Netanyahu burst out laughing. “‘Are you kidding me? You went to that high school?’” Rosenbach recalled Netanyahu asking Carter.

“It was one of these times when it was very high pressure — it was Ash doing something important for the president,” Rosenbach said. But Carter “delivered a human touch that kind of deflated the whole situation, too, so it’s one of my favorite memories of him.”

Carter championed several initiatives during the Obama years to improve the safety of military personnel. The redesign of military vehicles in order to be more blast resistant reduced the number of troops wounded or killed by mines, and was one of Carter’s accomplishments in which he took the most pride, according to Rosenbach.

Carter also pushed for the development of ballistic underwear in order to protect troops from suffering traumatic injuries.

After Carter was promoted to the top job in the Department of Defense, he opened combat roles in the military to women and ended a ban on transgender service members.

“Our mission is to defend this country, and we don’t want barriers unrelated to a person’s qualification to serve preventing us from recruiting or retaining the soldier, sailor, airman, or Marine who can best accomplish the mission,” Carter said in a June 2016 speech announcing the end of the ban.

“Just by changing those policies, the culture and the language around how we talked about these types of vulnerable communities in the military just totally shifted,” Park said of the changes Carter made during his time in the Defense Department. “He was able to do that in a really short amount of time.”

After the end of the Obama administration in 2017, Carter made a familiar move: to Cambridge, where he returned to the Kennedy School, this time to serve as director of the Belfer Center for Science and International Affairs. 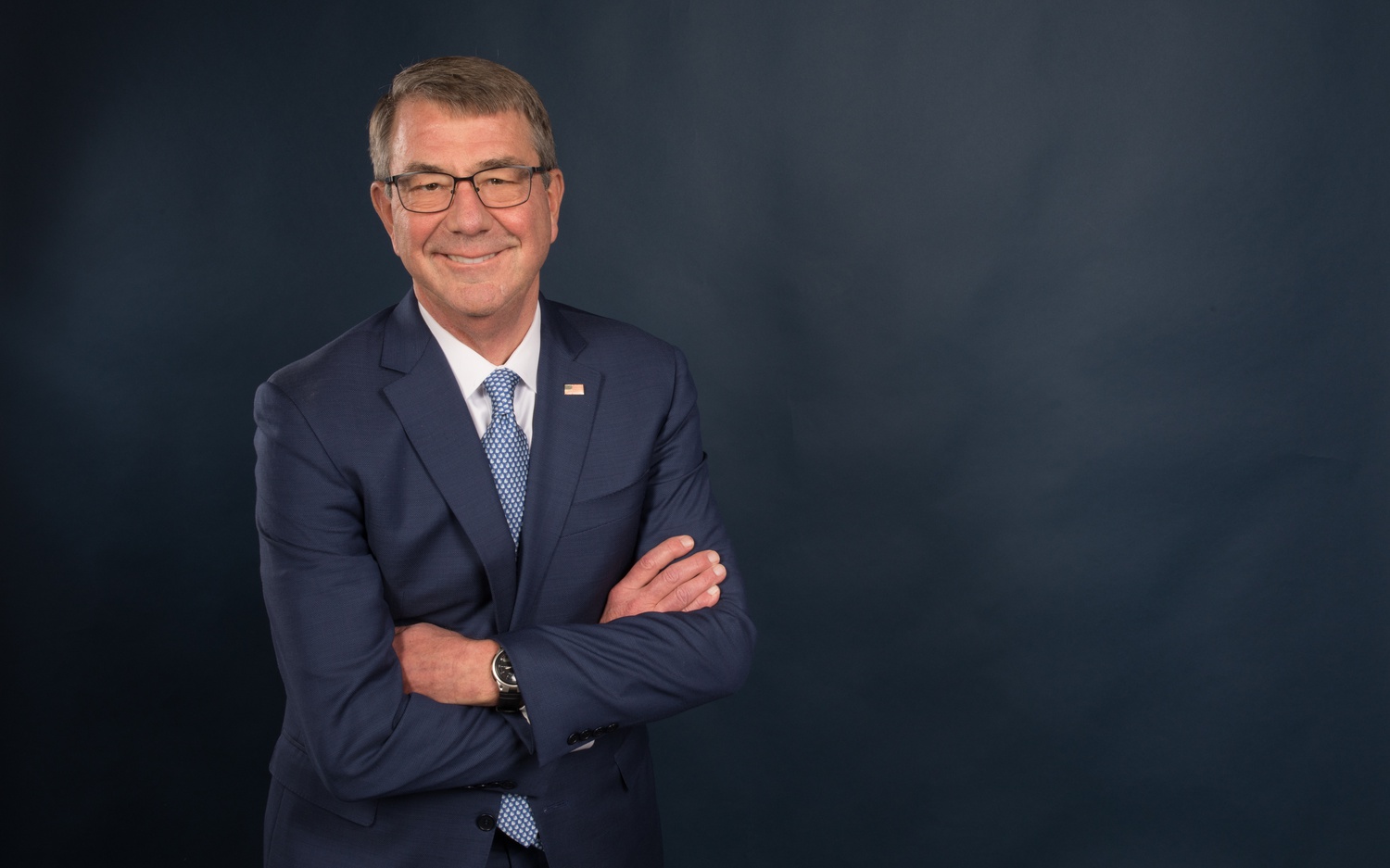 Ash Carter died on Oct. 24 in Boston after suffering a heart attack. He was 68. By Courtesy of Martha Stewart

“He said that one key reason he returned here was his experience at the Defense Department of visiting abroad and being greeted with the salutation ‘Hello Professor Carter’ from his former students—so he wanted to come back and work with more students, and he helped to raise funds for student fellowships,” Elmendorf wrote.

Allison said Carter was an “extraordinary person” whose death has left a big hole in the Kennedy School.

“People ask, ‘Well, who’s gonna replace Ash here?’ The answer is, nobody is going to replace Ash here,” Allison said. “There’s no such person who combines a strong footing in science and technology, and ferocious appetite for trying to understand all the frontiers of technology, and who has that deepest set of commitments to national security, policy, and policymaking.”