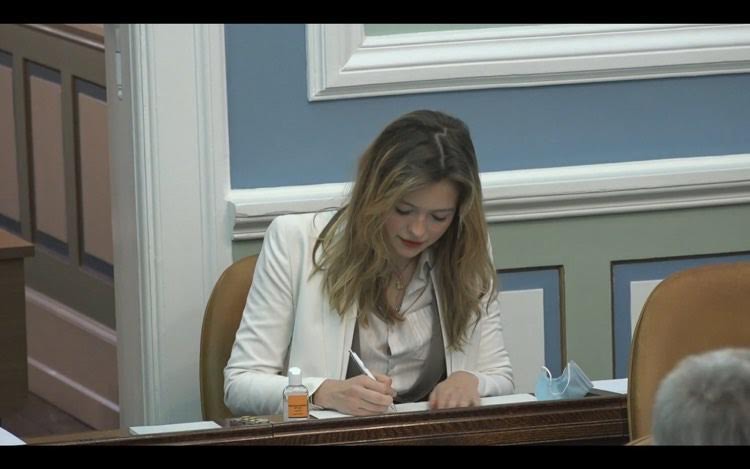 Weeks after finishing her first semester at Harvard, Gunnhildur F. Hallgrímsdóttir ’25 became the youngest person in Iceland’s history to be seated in the nation’s Parliament.

Hallgrímsdóttir — a member of Iceland’s Pirate Party — was sworn in last Monday as a substitute member of parliament and served for two days on behalf of Björn Leví Gunnarsson, a member of Parliament who took a leave of absence. At 19 years and 241 days old, she broke the previous record for youngest member of 20 years and 355 days old.

“They asked me to come in and fill in, and during that time, I was basically taking his place as a parliamentarian,” Hallgrímsdóttir said.

Hallgrímsdóttir previously participated in youth-led climate change movements, anti-corruption protests, and a push for a new Icelandic constitution. She attributed her interest in joining the nation’s Parliament to her activist background and a sense of “climate anxiety.”

Hallgrímsdóttir ran in the Pirate Party’s internal elections in March 2021, before the parliamentary elections on Sept. 25.

“Participating in those protests made me see how broken our system is,” Hallgrímsdóttir said.

She said she hoped her campaign would increase youth representation in Iceland’s government and further the country’s climate action.

“Even though there are great technologies out there that we can utilize and there is a lot of will, the politics is just not responding correctly,” she said. “It was so frustrating that I thought that, you know, the climate activism world should just enter politics. And because it’s such a small country, there’s so much potential for change.”

On election day, Hallgrímsdóttir placed outside the top two candidates, meaning she would serve as a vice parliamentarian. Her policy priorities have centered around climate change.

“I think that if you’re trying to deliver a stable government, it needs to be a government that’s outgoing and super progressive in their green investments because otherwise, it’s just going to fall behind,” she said.

During her two-day stint in Parliament, Hallgrímsdóttir proposed a budget amendment that would raise the carbon tax.

“I proposed raising the carbon tax to what the International Monetary Fund says is acceptable, and that was, of course, denied.” she said.

Hallgrímsdóttir’s role of vice parliamentarian has not been difficult to balance with her studies at Harvard, she said, noting her limited responsibilities when not sworn in.

“If there comes up a situation when there needs to be someone filling in long term, I would consider taking maybe one leave of absence for a semester,” she said. “But other than that, I fully anticipate being a full-time student doing this, and I think it's completely possible.”

Iceland’s next election is scheduled for 2025, but Hallgrímsdóttir said it is too early for her to decide her plans.

“My goal for this is to learn if this is the best way that I can take climate action,” she said. “My ultimate goal is not to pursue a career in politics, it’s to try to do something about the climate crisis.”

A previous version of this article incorrectly stated Björn Leví Gunnarsson, a member of the Icelandic Parliament, was temporarily absent from Parliament because he had fallen ill. In fact, he took an unpaid leave of absence.