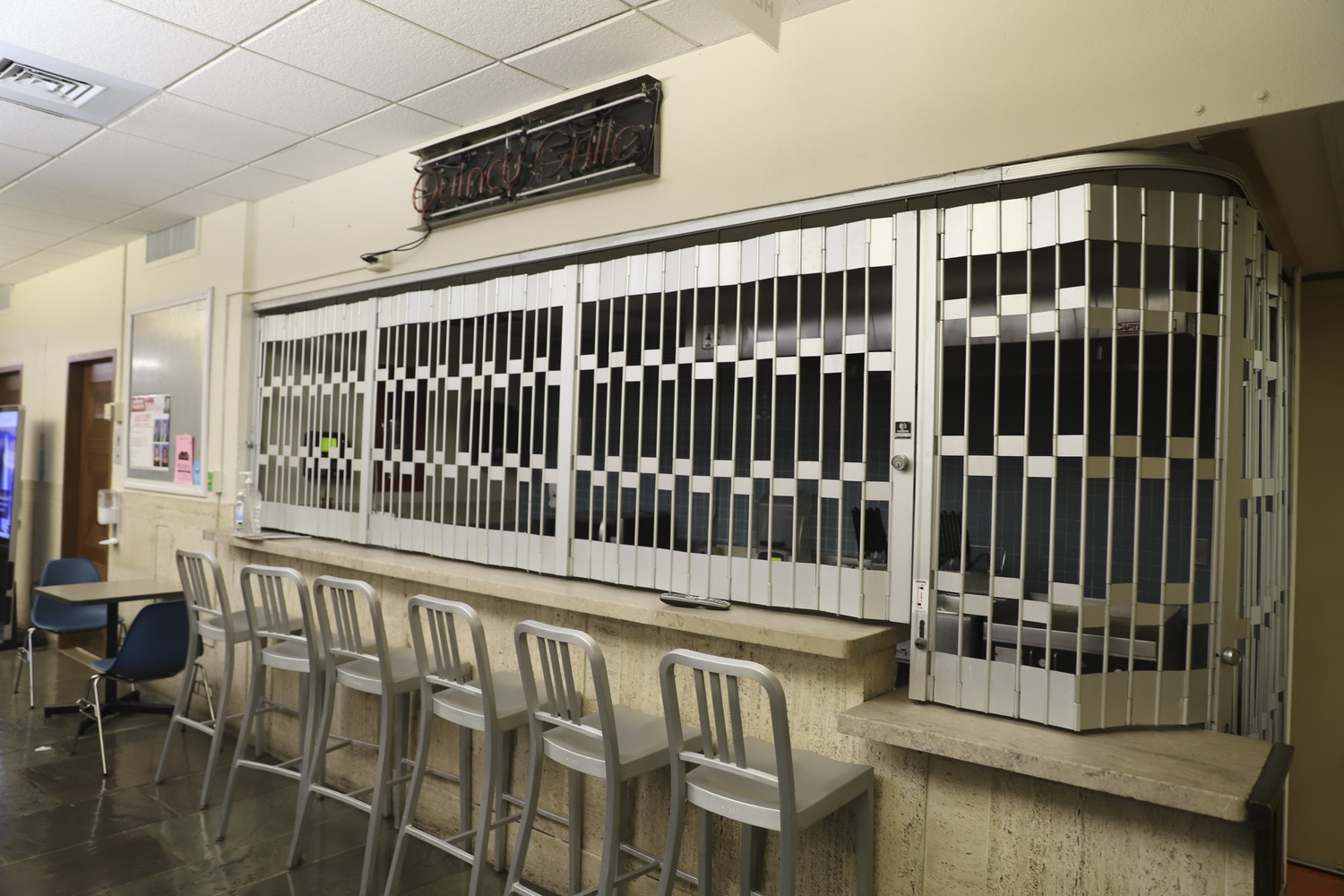 Though the College is back in person this fall, some campus spaces remain temporarily closed or have reduced hours due to staff shortages and Covid-19 restrictions. By Camille G. Caldera
By Alex M. Koller and Taylor C. Peterman, Crimson Staff Writers

Though the College is back in person this fall, some campus spaces remain temporarily closed or have reduced hours due to staff shortages and Covid-19 restrictions, frustrating the students who patronize them.

Recreational facilities, including the Quadrangle Recreational Athletic Center and Hemenway Gymnasium, as well as the Richard A. and Susan F. Smith Campus Center’s Collaborative Commons, are operating with reduced hours.

College spokesperson Rachael Dane wrote in an email that student-operated facilities, such as cafés and House Grilles, are reviewing Covid-19 safety standards. She added that Harvard will determine a reopening timeline for House Grilles once it completes additional hirings and training.

Dane also cited labor shortages as the cause of the QRAC and Hemenway Gym’s reduced hours and wrote that the facilities are “making every effort to staff up and return to full operation this semester.”

The QRAC opens at 4 p.m. every day and closes at 11 p.m. Monday through Thursday and 9 p.m. on the weekends.

Parker P. Hamilton ’24 said the QRAC’s reduced hours create a “very limited window” for him to work out.

“When I go there after I eat dinner and it’s busy, it’s really a big driving factor that turns me away,” he said.

Nathaniel A. “Nate” DeLucca ’24, a resident of Pforzheimer House, said he prefers to work out early in the morning or late at night, which “basically takes the QRAC out of the equation.”

“Mainly, I just stay in the Pfoho gym,” he said. “It’s small and very old, but it’s nice because there’s not a whole lot of people in there.”

The Smith Campus Center’s Collaborative Commons now closes at 10 p.m., though it was previously open 24/7, including for a brief period at the start of the semester.

Carol J. Cao ’23 said the earlier hours at the Commons are “unfortunate.”

“Collaborative spaces are very difficult to find nowadays,” she said. “I’ve been resorting to going to the d-halls.”

University spokesperson Brigid O’Rourke wrote in an email that Harvard moved the Commons’ hours to 7 a.m. to 10 p.m. due to “overcrowding and mask noncompliance, particularly during the overnight hours.”

“We hope to return the Collaborative Commons to a 24/7 schedule in the future,” she wrote.

Cao said she is also disappointed that many cafés are closed, citing her inability to use BoardPlus — the financial credit the College provides undergraduates each semester to spend at select dining locations.

“We do have $65 of BoardPlus, of which a single cent I have not spent because all of those cafés have been closed,” she said.

Lauren C. Baehr ’24 said the closure of Lamont Café is a “bummer.”

Kevin Tan ’23-’24 said buying food from the Winthrop Grille late at night was one of his favorite parts of campus life and that he looks forward to its reopening.

“I miss the grille so much,” he said.