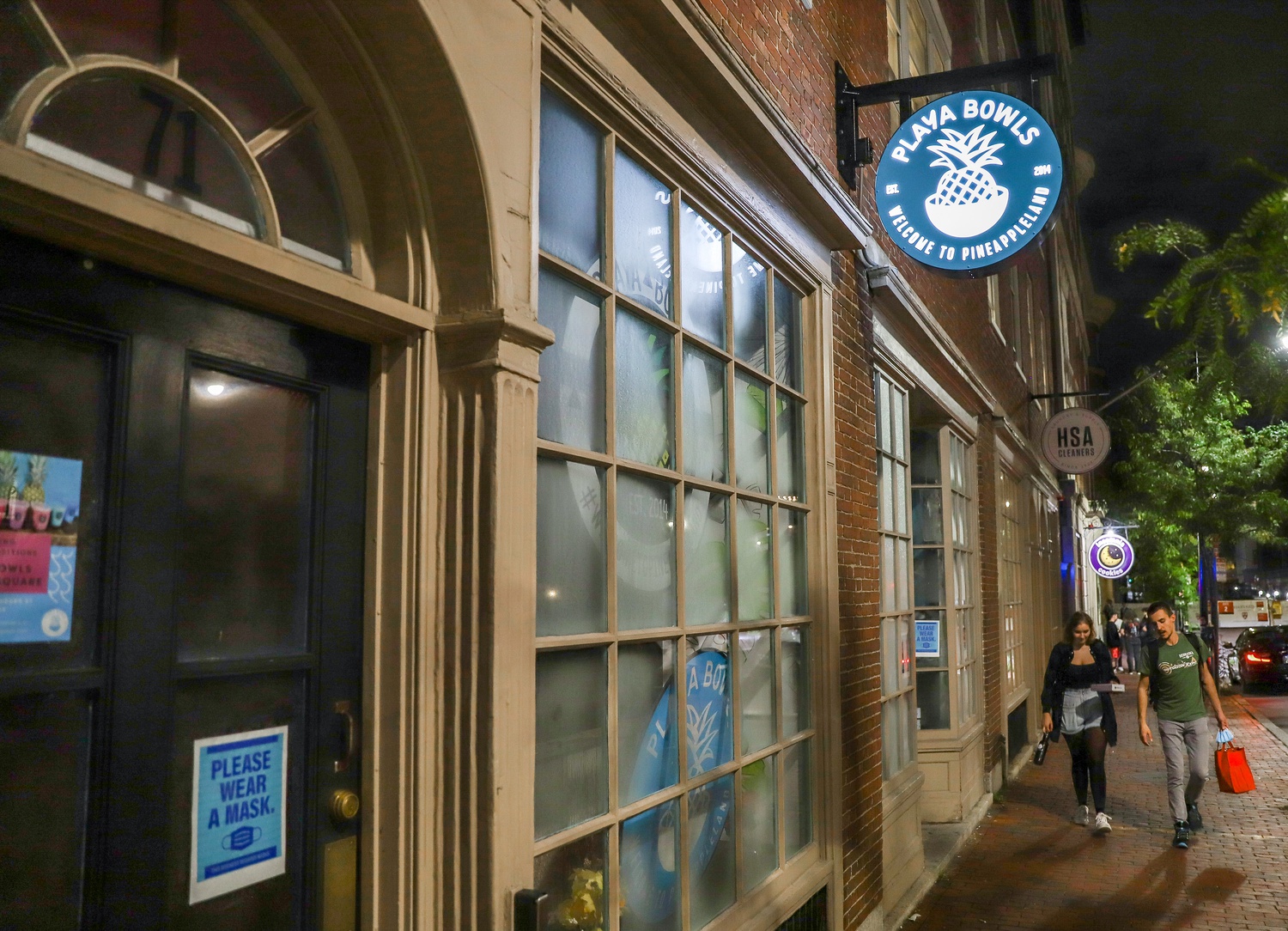 Harvard Square acai restaurant Playa Bowls has partnered with 12 Harvard student athletes as part of the NCAA's new policy permitting collegiate athletes to profit off of their brand. By Simon J. Levien
By Benjamin L. Fu

After the National Collegiate Athletic Association passed a policy allowing student athletes to profit off their brand image, a number of Harvard athletes are taking advantage of the new policy by inking sponsorship and endorsement deals with local and national brands.

Following the United States Supreme Court’s unanimous ruling this summer that the NCAA cannot restrict education-related benefits for collegiate student athletes, the NCAA Division I Board of Directors approved a new policy that took effect July 1 allowing individuals to profit off their name, image, and likeness, otherwise known as NIL deals.

Washington is one of Harvard’s 12 “Playa Athletes,” according to Playa Bowls managing partner Hung J. Lam. Lam said in an interview he believes the business’s decision to sponsor student athletes at Harvard and other schools in the greater Boston area, including Northeastern and Boston College, is compatible with the company’s objectives.

“Our goal with the partnership is twofold,” Lam said. “One is building awareness and getting the name of ‘Playa Bowls’ out to the Harvard community and then, secondly, to promote healthy eating too.”

Student athletes who sign with Playa Bowls receive merchandise as well as free food every month in exchange for promoting the restaurant on social media, per Lam. He added that Playa Bowls is considering expanding the program to include more student athletes and other campus brand ambassadors.

“It's nice to have folks that are really involved with the school, whether it's from an athletic standpoint or from different clubs," Lam said. "We're excited to have them just to be a part of it and to help us to market it and promote it, and we're seeing a nice return on it."

The financial benefits for some NIL deals, however, are not always as tangible. Harvard squash player Sam B. Scherl ’21-’22 said he was able to receive free rackets and other merchandise as part of an annual contract with Dunlop Sports. The deal did not provide much more than he already received from Harvard, Scherl noted.

“There really isn't a big difference, especially out of places like Harvard where they are paying for all of your gear,” Scherl said. “I kind of more sought out the racket sponsorship just because I thought it would be fun to explore an NIL opportunity, and this one came to mind and I had connections to the racket brand that I reached out to.”

Washington said he pursued sponsorships with brands he believes reflect his values.

“I went about it by just going with brands that showed who I was, that aligned with what I branded myself as, so honestly just reaching out to various different companies on Instagram, through Twitter, through all of the social medias, and then finding out what their brand is about and seeing if my beliefs align with theirs and trying to match up from there,” Washington said.

According to Washington, other members of the football team have been able to secure deals with Liquid IV, BodyArmor, and other brands.

Associate Director of Athletics for Compliance Christian Bray declined to comment on the number of student athletes who are actively part of NIL deals, but said the department supports students’ efforts to benefit from sponsorships.

Scherl said he is excited to be among the first crop of student athletes to explore sponsorship opportunities as part of the NCAA’s new policy.

“This generation of college athletes gets to be the first to explore what this could look like,” Scherl said. “It's just exciting to be on the frontier of that and figure out how the system works, and how student athletes can brand themselves.”